The returned Aviation400 has so far been a rather enigmatic presence in 1:400 scale. It has announced several models using its A330 and A340 moulds that have not appeared, whilst its A350 releases have been rather stop-start also. I think is probably due to it being part of the Inflight stable and they appear to be a company that announces huge numbers of models, especially in 1:200 scale but then struggles to deliver. There has also been some concern about the research on some of their models, however their A350s have gained a lot of praise and they have also seemingly resolved some early niggles with the mould. Here I take a look at one of their most recent A350s wearing a delightful but complex scheme. 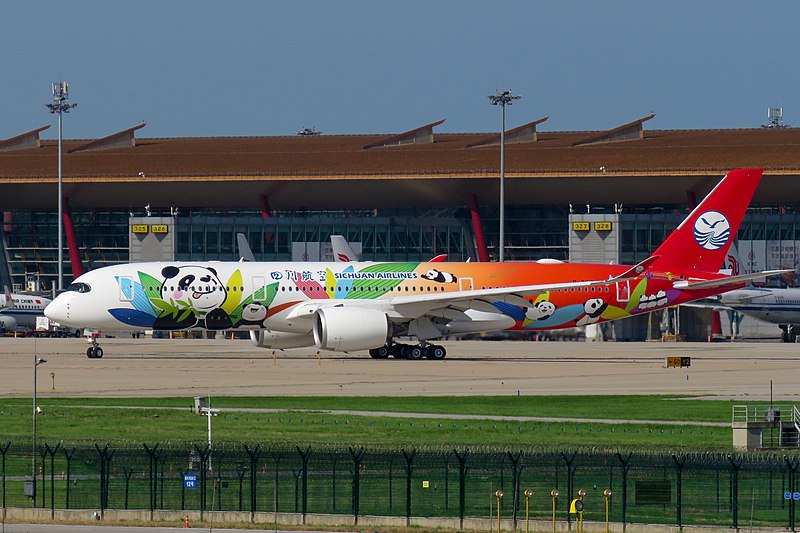 Sichuan Airlines has been for many years a strong Airbus customer and nowadays operates the largest all-Airbus fleet in China. Nonetheless for much of its existence it has been primarily a domestic airline and only began long-haul flights in June 2012 connecting its Chengdu hub to Vancouver using A330s. Since then the long-haul network has increased in typically eclectic Chinese style to include obvious destinations like Los Angeles and Sydney as well as more unexpected and seemingly random routes like Prague and Cairo.

In recent years many of the second-tier of Chinese airlines have begun acquiring front-line long-haul aircraft rather than relying on the excellent and more flexible A330 so it was in that context little surprise that in 2018 it was announced that Sichuan Airlines would acquire ten Airbus A350-900s. In addition, it would lease a further four A350s.

The four leased A350s could be acquired due to the controversial cancellation by Sri Lankan Airlines of half its order for 8 A350s. Following financial troubles and several regime changes at the Sri-Lankan flag carrier it was deemed that the aircraft could not be operated profitably, however the cancellation has proven very expensive for Sri-Lankan and given that AerCap Holdings was able to lease the aircraft so easily you have to wonder why Sri-Lankan didn’t take them and sublease them itself.

Sri-Lankan Airlines loss was certainly Sichuan Airlines gain and B-301D, the first of the four leased aircraft, was delivered on the auspicious day of August 8, 2018. In China 8 is considered a lucky number of some importance hence why we have Airbus A380-800, 787-8 and 747-8is – rolls eyes!

The A350s are configured with 331 seats in a two-class arrangement of 28 business and 303 economy. Sichuan was the first mainland Chinese airline to take delivery of the A350 and as it usual began operating the type on domestic services prior to moving to its ‘Panda’ routes.

The A350s will no doubt well support Sichuan’s aim to launch more international routes in 2018 and 2019 with destinations such as Tel Aviv, Copenhagen, Zurich, Boston and even Panama either starting or in the pipeline.

As I found when I did a detailed comparison of the available A350 moulds they all have failings, often in different areas, but the Aviation 400 mould has been broadly welcomed because although not perfect its failings are not as much a problem in the overall look of the aircraft as the JC Wings nose and Phoenix engines. JC Wings have responded with an updated mould but given the humungous production delays JC routinely forces upon us none have hit the market yet and its only appearance has been on a Virgin Gemini Jets A350-1000.

Firstly, the nose shape. The JC Wings mould does not reproduce the slight change in angle upwards beneath the cockpit but this Aviation400 mould does. Holding it up in front of a photo of the real thing the change is perhaps still a little too subtle but overall it matches very well. In general I think it is superior to both the JC Wings and Phoenix versions.

The fuselage is excellent including the complicated post wing area. It also has exceptional mould detailing. There are seven antennae (3 on the roof, 2 on the belly forward and 2 on the belly rear) two of which are very small. In addition, the two tiny domes on the roof above the wing are not moulded in but separate units precisely moulded and fitted.

Also, as with their A340 mould, this mould has both beacons (plastic inserts) on the upper fuselage and underneath. They are flatter and smaller than on the A340 so work even better. This aircraft also has a sizeable satnav/Wi-Fi dome, unfortunately it isn’t particularly well shaped. On the real thing it is a teardrop but, on this model, it is rather uniformly shaped.

The engine pylons and nacelles themselves are very good also keeping the engines well off the ground and closely fitting to the wings. Early AV400 A350s had an issue with engine orientation, whereby the engines pointed upwards but that has now been fixed and removes the biggest issue with the mould. The engine inners are very finely detailed. The engines are see-through, in fact the most see through I’ve ever seen in 1:400. This isn’t necessarily a compliment as the blades are way too thin.

Looking at the undercarriage and it is very finely built. The nosegear is a good length but not as chunky as the Phoenix, although as with the Phoenix the tyre is a little large. The maingear bogies are separate pivoting units (as in the Phoenix 777) and so can be moved independently to replicate different positions. The mechanism for doing this does mean that the bogies lack detail and look rather unrealistic. It is a trade-off with the mould and one of the few areas where on a looks basis it is inferior to the other manufacturer’s offerings.

With a combination of features and exceptional detail to the aerials, undercarriage and engines this is an excellent mould. It is in my opinion easily the best in 1:400 scale however there are minor points (maingear trucks and engine fans) that could be improved.

Given that Sichuan province is the primary home of the remaining populations of the Giant Panda it would have been amazing if the airline had passed up the chance of applying a Panda style special scheme to the A350 and certainly the playful livery used on this frame is a lot more exciting than Sichuan’s usual rather old-fashioned scheme. The second A350 delivered, B-304U, wears the standard livery.

It is a complicated livery to reproduce at 1:400 as there are lots of different components, many colours and detailed veining on the leaves. There are at least eight separate colours on the bamboo leaves themselves, plus a gradation to Sichuan’s standard red colour and eight playful Pandas on each side. The scheme is at least symmetrical but represents a major challenge to get right.

AV400 has faced some criticism for colours recently – their Cathay A350s were particularly poor but on this model the colours are almost all correct and well realised. Only a couple of bamboo leaves appear wrongly shaded. These are the four that should be yellow but are more a light green and the furthest rear one, which I think should be pink but is more blueish on the model.

The placements of all the elements is commendably good, especially at the rear where a Panda conducts, a series of notes splash across the rear and three other Pandas watch. The fuselage gradation after the largest bamboo leaf from white through yellow to orange and red is also very good.

The forward main Panda and her smaller cub with the bamboo behind is also very good, especially the veining on the leaves. The leaves over the wing and the main Panda area do not necessarily go low enough on the fuselage but they are out by only a mm or so.

Aviation400’s printing is very good and widespread. The cockpit windows are particularly strong. The frames around the side cockpit windows is very finely detailed and yet fit well within the bandit mask. Areas like the gear doors have stronger print lines whilst other areas around the nosecone and roof are superfine.

One of the diagnostic points about the A350 engines is the main exhaust funnel should be a metallic blue and not silver. This has often been missed on 1:400 A350s but Aviation 400 do pleasingly provide the correct colour. Unfortunately, on the port side the paint is unevenly applied compared to the starboard with the portside cone ending metallic.

Construction quality is excellent which given this model consists of over 30 separate pieces is no mean feat.

I must be getting soft as this scheme is veering scarily close to ‘Hello Kitty’ territory but I had been looking forward to receiving this model for some time and I am very pleased to say that it doesn’t disappoint. Aviation400 can’t compete with NG Models for customer care and refinement or Panda for releases in 1:400 scale but this A350-900 is still the best available and this model especially a very impressive example of it. Phoenix and JC Wings must continue to look over their shoulders as they are being attacked by often superior products from all sides it seems.

November 2017 is shaping up to be a busy one for Phoenix models as they’ve announced the release of 19 new diecast aircraft! This month’s releases are heavily concentrated around 1/400 scale models, but there […]