November 2018 saw the announcement and release of the first Aeroclassics branded 767-200s following the previous month’s Bluebox/White Box releases. The mould has already been tweaked to offset some early criticism and the early releases have covered appropriately the earliest operators of the type. Amongst those is Pacific Western, which was a model announced 17 years ago by Dragon Wings but never released. It is great to see the big Six in the PWA colours finally.

Pacific Western was one of the five geographically restricted regional airlines setup to fly secondary scheduled routes in the Canadian pre-deregulation era. Unlike several of its sibling regional airlines PWA was successful, partly because it had access to both Vancouver and Calgary, both of which would be the airline’s headquarters at different times. The “Chieftain Airbus” was also a major economic success operating as a shuttle between Calgary and Edmonton up to 14 times a day.

For a regional airline PWA had lofty ambitions and ordered four Boeing 767-200s with two further options in 1979. The 767s were destined for two roles: firstly, to serve routes between Toronto Pearson and PWA’s cities of Calgary and Edmonton. These were scheduled services that PWA hoped to acquire allowing it to expand out of its restrictive western niche. Unfortunately, Air Canada fought hard to stop PWA from acquiring permission to fly the routes and won.

The second role was to replace Boeing 707s on PWA’s North American charter routes. However, both the 707s were sold in 1979 and these services appear to have been winding down somewhat. That meant that when the first 767, C-GPWA arrived on March 4, 1983 they did not have a clear role. As a result, two of the orders were cancelled and the two delivered 767-275s were used on PWA’s existing short haul network.

For a two-year period between March 1983 and May 1985 they could be seen operating between Vancouver and Calgary or even on the Vancouver-Seattle segment, which was only 110 nautical miles. Unsurprisingly they were not well suited or needed on such routes and PWA sold them, no doubt reluctantly, in 1985 to the enemy Air Canada.

Interestingly both aircraft kept their original registrations with AC and caused some grief between the two airlines. As is well known PWA eventually got its longer routes by buying out Canadian Pacific to become Canadian Airlines International, however when the airline acquired its first 767-300ERs it apparently asked Air Canada for the C-GPWA registration series back. Air Canada refused but in later years when Air Canada restored an old Lockheed 10 it asked PWA for the C-FTCA registration back and unsurprisingly they refused, forcing Air Canada to register it as CF-TCC.

Anyway, both the 767s served in the Air Canada fleet into the new century. They were effectively identical to the AC fleet aside from having smaller cargo doors and non-electric pilot seats. C-GPWA was retired on March 31, 2001 and stored at Mojave where she remained as of early 2015.

This past month has seen the first release of Boeing 767-200s branded as Aeroclassics but it is the same mould as the unbranded releases from October with one significant difference. The 767-200 has had a decent set of moulds made for it, albeit none have been as widely used as I’d like. Hopefully that’ll change now with the Aeroclassics mould since it is superior to the old Dragon Wings / Jet-X mould and at least as good, if not better, than the Gemini Jets/JC Wings one.

The fuselage shape is excellent especially at the nose and tailcone. The blunt rounded nose of the 767 is re-created well and I can’t fault the tail region either. In fact one of the nicest parts is the vertical stabilizer itself, which has a deep and effective rudder line rendering extra printing unnecessary.

The mould is seamless and so the wings slot into the fuselage. The wings are well shaped and have good control surfaces. The only point of issue is that perhaps the wing/fuselage fairing is a little under-represented ahead of the wing. 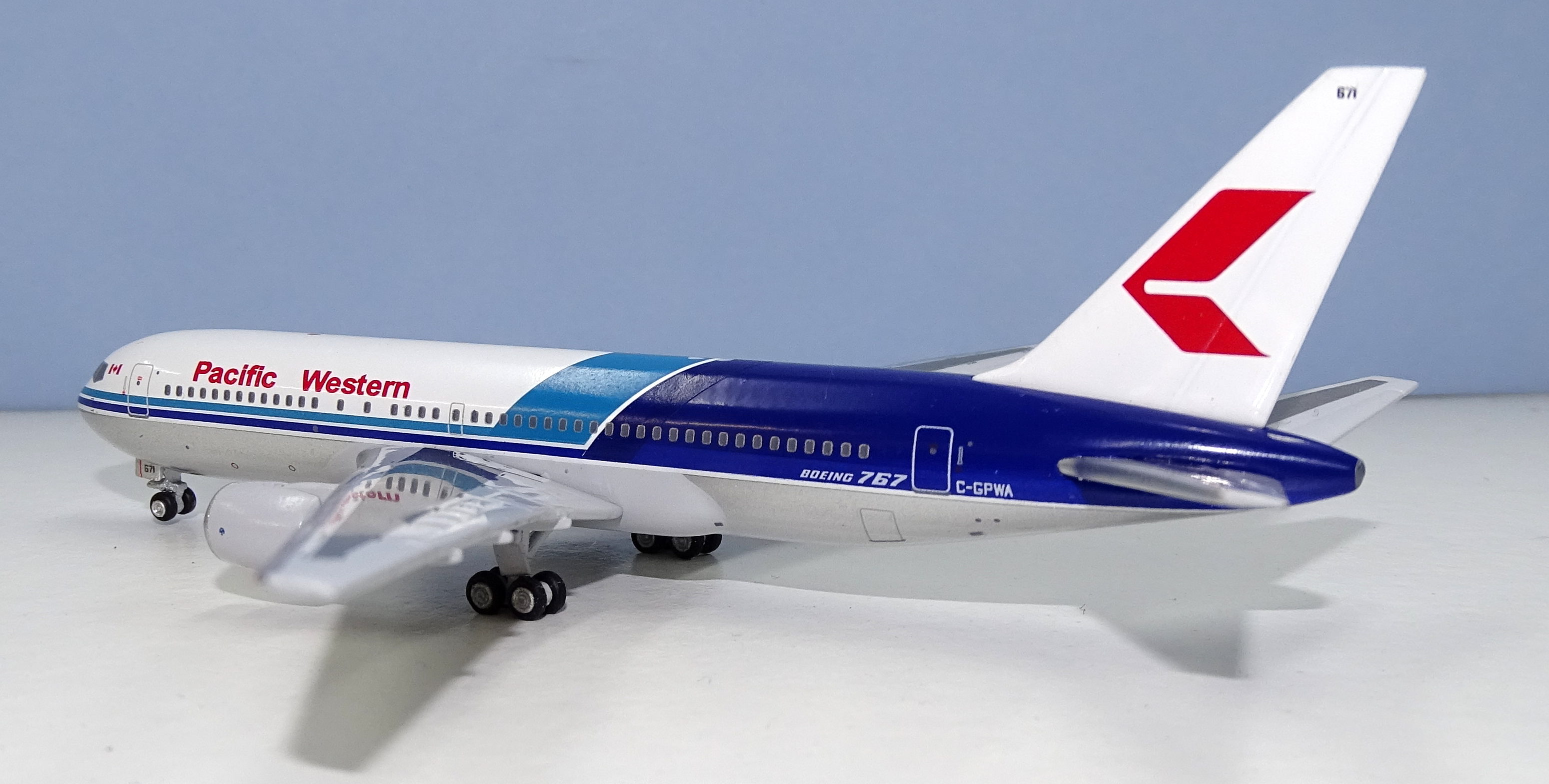 This being Aeroclassics the most obvious ‘error’ is not an error at all and that is the lack of aerials. All four are missing (two up top and one forward and backward on the underside). I do think they would improve the model but it is not a deal breaker by far. Nonetheless it does rather expose the mould to competition from the aerial equipped JC Wings mould, which is far from shoddy anyway.

Under the wing the engine pylons do not reach far enough to the rear but otherwise are well shaped. The engines themselves are decent representations of Pratt & Whitney JT9Ds, although the nacelle is a little long.

Compared to last month’s 767s the big differentiator is the undercarriage which is very different. For the first time Aeroclassics has produced wheels which are not just tyres on a metal rod but have accurate tyre-hubs. It is a major improvement, although there is no escaping that the nosegear tyre is now a little too large. The problem is that decreasing the tyre size means the nosegear leg needs to be a little longer.

The maingear itself is very good but the maingear doors are a rather odd shape, effectively rectangles that don’t join with the fuselage well. You don’t really notice it unless you’re looking closely. The mould has been improved over the first efforts, however the nosegear tyre size, maingear door shape and lack of aerials still means it isn’t hitting the heights it could.

Pacific Western’s last livery was an interesting departure from other airlines at the time since it increased the painted area of the aircraft over the previous scheme rather than going euro-white. Low twin blue stripes, separated by white, expand at the fuselage mid-point and envelop the rear fuselage, whilst a classic natural metal belly complements the colour nicely. The tail logo is classic PacWest although to be honest I’m not really sure what it is meant to be. Is it an asymmetric arrow-head, a wing or some ultra-stylised bird?

This aircraft isn’t very well represented in photos and the colour shading varies somewhat also. In some shots the red tail logo and titles look almost orange but I think Aeroclassics has correctly got them a much deeper shade of red. The dark blue main colour is also nicely dark. It is the light blue that I think is perhaps a little incorrect. The Aeroclassics shade is a bit greenish whereas all the photos I have seen make it look a definite light blue. Colour isn’t my strongpoint and it isn’t miles off.

Most of the rest of the fuselage livery detailing is accurate. The engines, nosecone and wingbox are all light grey and not silver, but the nosegear doors are incorrectly silver. The belly is a very nice silver, unlike the disco glitter of the Deltas from last month.

The main titles font, size and spacing is all good, as is the application of the Canadian flag and the aircraft titles, fleet number at tailtop and on nosegear doors, and registration. 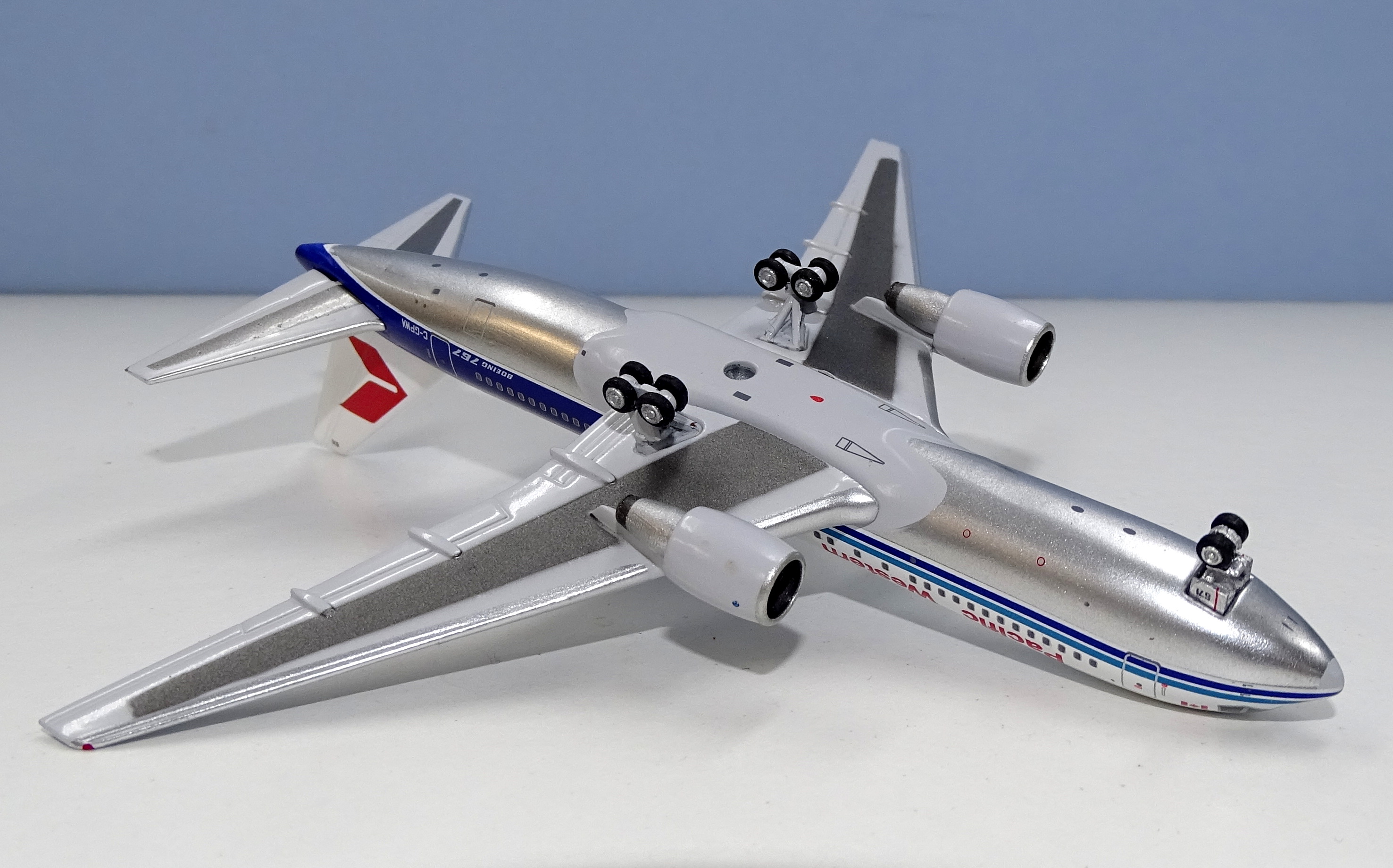 Printing on this model is ok but also somewhat lacking. The passenger entry doors are too short. They should be higher at their upper margin than the cockpit windows and they are not. On the underside the model also lacks any printing of the main undercarriage doors. These are exactly the same errors as on the TWA 767 I reviewed but additionally in this case also the main cargo doors on the starboard side are too small.

Of the painting the engine second portion is bright silver for too much of its length (again as with the TWA) but the paint on the wings is applied better. Another printing detail missing is the navigation lights near the wing root, something that Dragon Wings was printing on their 767s 15 years ago.

The model looks like it is perfectly put together until you place it on the ground. It then becomes quickly apparent that something is up with the landing gear since the model refuses to sit with its nosegear anywhere near the tarmac. The issue appears to be with the portside maingear. Firmly pushing the model down over the maingear improves the situation but it does come back if you adjust the model’s position.

This is a much sought-after model and, as with the TWA 767 I reviewed, actually at distance it looks very good. In fact, it is a better model than the TWA, which had to my mind more egregious errors on it, but still Aeroclassics just can’t get to the highest level of quality to compete effectively against other manufacturers. The main door height and nosegear door colour have cost points when I know they weren’t on the actual design sheet, whilst the failure of the model to sit flat is just bad build quality. I know that Aeroclassics will be improving their 767s by adding maingear door outlines but regardless this was a rather disappointing month for them, especially when this was one of the best of the models they made in November.

Inflight200 has announced the release of 8 new diecast aircraft models scheduled to be available in November. Several retro models are part of the lineup including an Eastern DC-10, General Dynamics CV-880, World Airways B747-200 […]

Last week, Herpa Wings announced its 11/12 lineup of models. We take a look at some of the highlights of this upcoming release. 1:87 Scale Highlights The real life Junkers model can be found at […]