This has been a disappointing year for Phoenix in my opinion. Last year of the 147 models I purchased, released in that year, 12 were from Phoenix. So far this year there have been only 2 from 98. In fact, even if they were releasing interesting models (and largely they are not) there are few of their moulds I would choose to buy over others. JC Wings have better 777s and 787s, Panda and Aeroclassics have better A320s, HYJLwings have better A321s, Panda and JC Wings have better 737s. It is only the 747-8 and A380 that are still top of the range for Phoenix. One of their moulds that I do still rate is the A330, although it isn’t the best still. For diversity’s sake I’ll take a look at one this week.

Lucky Air is yet another element of the byzantine HNA Group, but seemingly one of the more independent components as it is a joint venture between them and the Yunnan government. The Kunming based airline began service in February 2006 and by 2015 had grown to be the 2nd largest airline at the important airport. Even so it’s 12% share was way behind its nearest rival China Eastern’s Yunnan division’s 42% and close to China Southern’s 10.5%.

For its existence up to 2015 Lucky was just another of the many middle of the market Chinese airlines offering a full-service light on frills. As with many of the HNA related airlines it also sported a livery that tied it in to its larger parent. The Chinese government belatedly came around to Low cost carriers at about this time and Lucky Air began its transition by removing free meal service and moving to one class configurations.

Right from the start Lucky Air had a mixed fleet of Airbuses and Boeings, and oddly for an LCC it still shows no signs of conforming, having taken on both A320neos and 737 MAX 8s. In fact, the MAXes even have business class. On a more LCC note it was one of the founding members of the U-FLY Alliance, but the resilience of business class and the acquisition of widebodies does suggest Lucky Air is more of a hybrid airline than true LCC.

International destinations now include Brunei, Malaysia, Philippines, Taiwan, Thailand and Vietnam but the trio of A330s currently operated are used mostly on the Kunming-Moscow route, which began on June 12, 2017. Initially the route was twice weekly, later increasing to three times weekly, and utilised a lone A330, B-5971, acquired from Hainan Airlines on lease on March 7. The aircraft was configured with 292 seats in two classes: 32 business and 260 economy. This aircraft remained with the fleet until March 10, 2018 by which time the first of Lucky’s own new A330s was in service. B-5971 has since re-joined the main Hainan fleet.

The existing Lucky Air fleet includes 51 aircraft however the immediate future of the airline is in some doubt given the HNA Group’s continuing issues. Just last week the HNA Group was forced to deny reports that it planned to sell both Lucky Air and Beijing Capital Airlines. It had been reported in the Financial Times that in order to assist in servicing its $78 billion debt it was selling its 60% stake in Lucky to China Eastern. Given their positions at Kunming that would seem an odd move to allow but then again things work a bit different in the people’s republic.

I own 18 Phoenix A330s yet looking back, somehow, I have never reviewed one here at the Diecast Flier, which comes as something of a surprise. In fact, it hasn’t been since October last year that I looked at an A330 at all. That is not to say I am not a fan of the type or the Phoenix mould. This mould is the second A330 Phoenix has used, and was introduced in 2010, but still competes well with newer A330 moulds from Aeroclassics and Panda, whilst easily beating the JC Wings/Gemini effort.

The nose and cockpit are one of the best points, literally. It reproduces the classic Airbus widebody nose well. The nosegear leg is the correct length and well detailed, although the nosegear bay doors are too large. The tyrehubs are of course a Phoenix strongpoint and look excellent.

The wings and mid-fuselage are exemplary, at least from the side and above. On the underside of the fuselage the mould shows its age with very little in terms of detailing of the scoops or anything else. The maingear legs are also a little chunky, especially between the tyres. The engines are well shaped and have excellent pylons keeping them well above the ground.

The mould has an impressive array of aerials – seven in fact, which is close to a record for a 1:400 scale model. Four of these are underneath and they all look very good. Another plus point for the mould is the moulded in dome on the forward roofline.

I really like the look of the Phoenix A330 and although it comes second to the Panda Models A330 on a close inspection (the Aeroclassics is in the same ballpark too) it is sufficiently good that I don’t have any issues at all recommending it or acquiring it.

January 2015 saw Lucky Air release an entire new branding whose tail at least bears a striking resemblance to that of British Airways. The new scheme is a mixture of red and yellow with a new seal logo replacing the previous bird. JC Wings has promised an A330 in the new scheme for some time but it has yet to arrive.

Lucky Air has also not been especially swift at repainting all its fleet. This aircraft being leased from Hainan only ever acquired a hybrid scheme. It acquired the full titles and seal logo but kept the Hainan tail. Oddly a fair bit of the fleet has this hybrid livery even though the aircraft have never been used with the parent company. That means even into 2018 there are three liveries in use with the carrier – the old, the new and the Hainan hybrid. 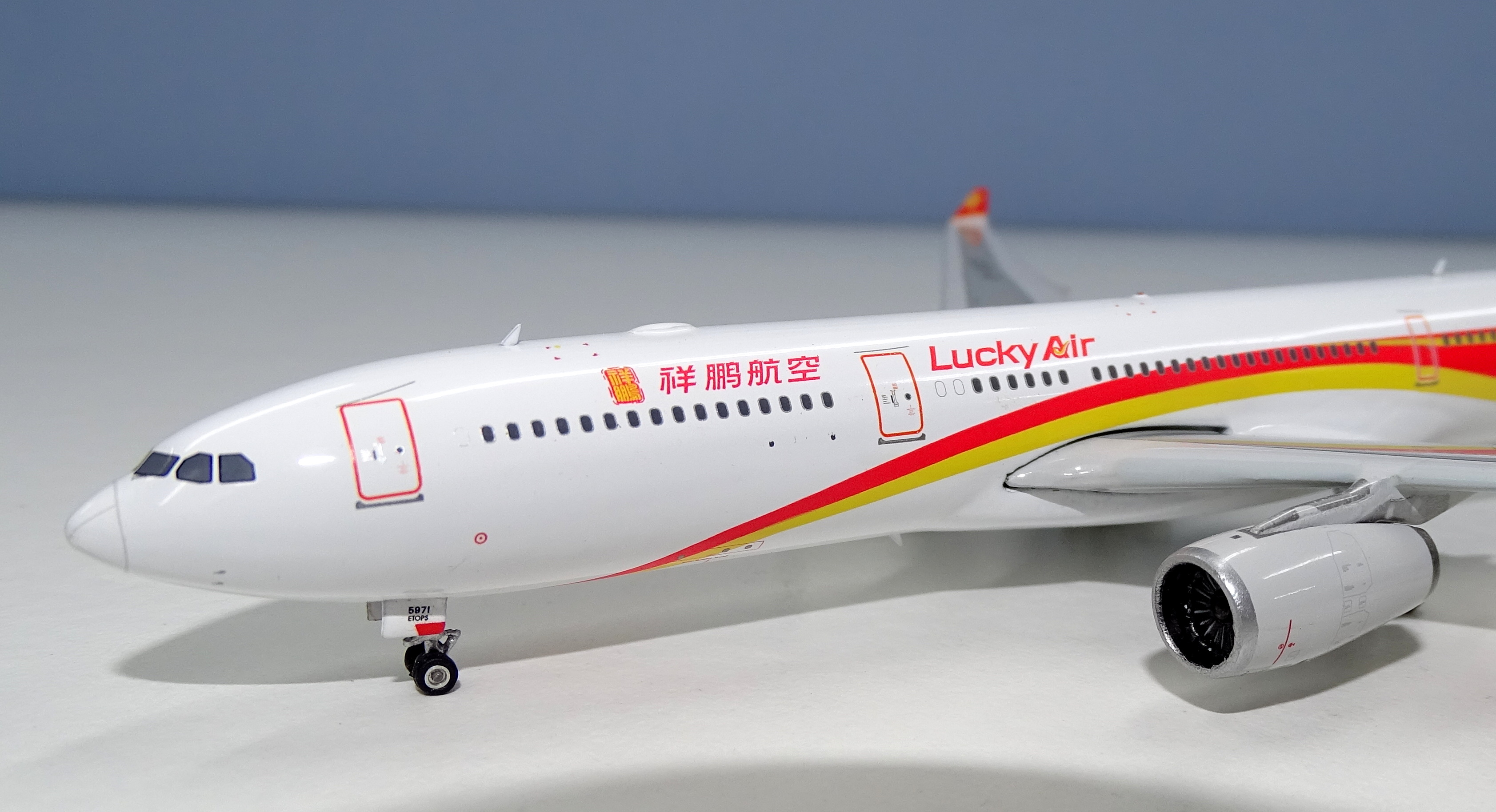 The colour of the Hainan base livery is a source of contention among the manufacturers. Phoenix err more towards the orange end of the spectrum and I think they have it closer to correct. The complicated new Lucky seal logo appears ahead of the Chinese language titles and both it and the main English Lucky Air titles (with the distinctive swoosh mark in the A) are nicely reproduced. It does look like the outline around the doors is a too dark an orange, although without a macro lens it is almost impossible to tell.

The rest of the scheme is a commonly made one so there isn’t really any excuse for mucking it up and Phoenix haven’t. The attractive sweeping orange and yellow ribbon flows down the fuselage in the correct position and the tail logo is well defined with the correct shading on its lower edges.

The only point deduction is that the upper yellow swoosh is not bright enough and looks like it was applied over the orange beneath it. Look closely and you can see some leaching type lines along its upper edge and where it crosses the fuselage centreline near the base of the tail. 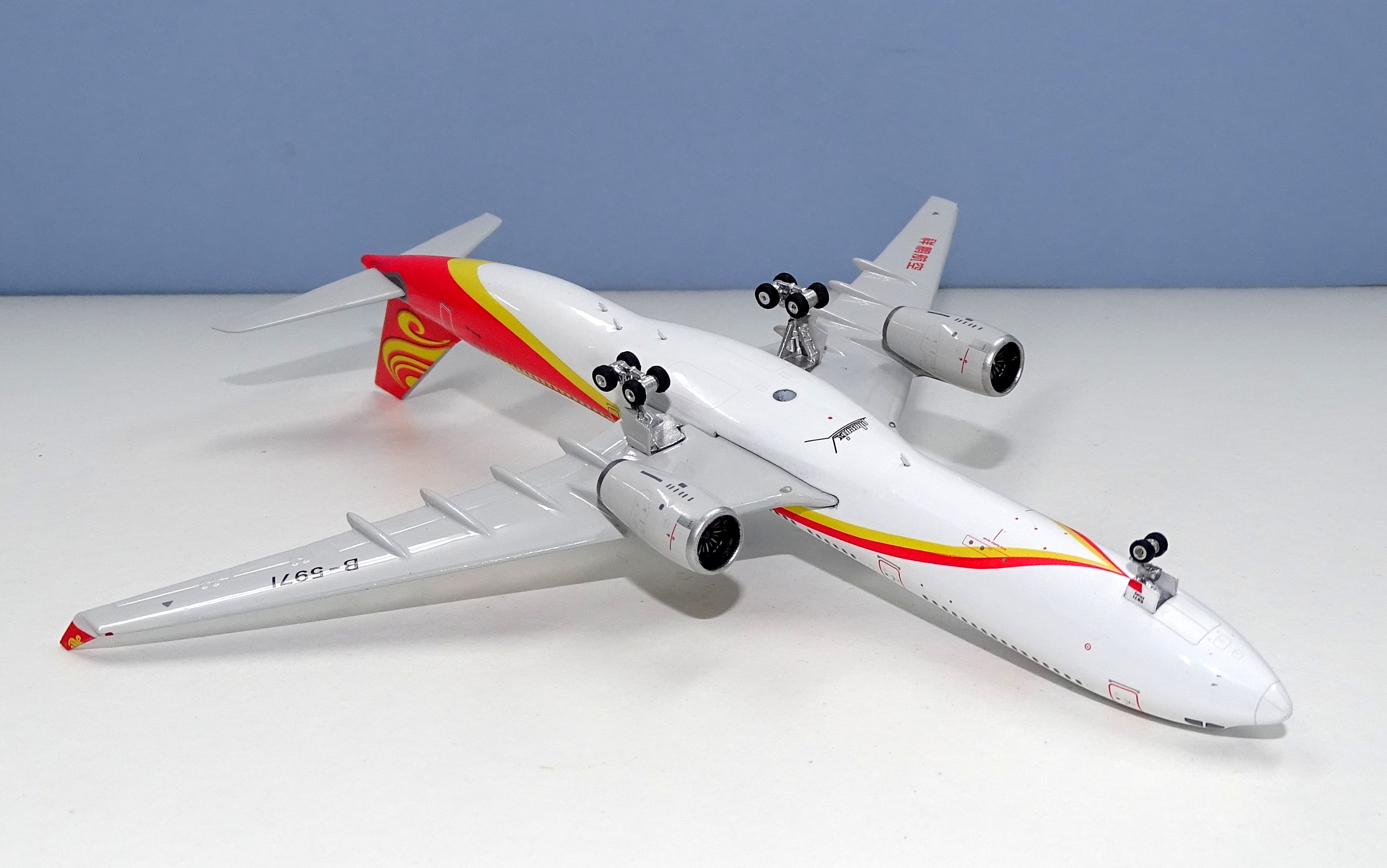 Printing detail is not one of Phoenixes strongest points but to be honest they have made a decent fist of it here. The nosecone radome has very fine markings as do the engines themselves. Other small markings like the 5971 ETOPS text on the nosegear doors are present, however although the ‘cut here in emergency’ panels are marked on they have no sign of the text that sits within them. The underside is spartan on the printing side but adequate and at least it has gear door outlines. Missing also is the obvious black painted line that runs around the wingtop and meets under the belly.

Something that is noticeable in close-up is that the engine rims are messy. The silver rim intrudes into the inner black and a few strands of paint appear loose.

I have seen previous reports of poorly constructed Phoenix A330s where the rear wing does not fit neatly against the fuselage sides. That is not the case here, although there is a reasonable gap at the wingroot around the mid-wing and the port wing wiggles a little scarily in its place, the wings look good.

It wouldn’t be a Phoenix model if there wasn’t at least one tyre tab but aside from that the only construction issue is the nosegear. The gear leg is bent to the right side and I am not going to try and bend it back straight. The gear still sits flat but it is noticeably bent.

This is, without a shadow of a doubt, a bread and butter model for Phoenix. However, this is exactly the sort of model they need to excel at with competition so fierce almost across the board for moulds they use. It is a weakness for them that their mould catalogue is relatively small, and aside from a few Soviet types they rarely use, not particularly adventurous. Nonetheless this is a perfectly decent release from Phoenix and shows that they can still be a decent source of models if you can’t find an alternative or it is one of their better offerings, as the A330 is.

Only last month I reviewed a Republic Convair 580 and said how excellent it was that the airlines of Northwest’s heritage were getting some belated attention. The announcement of 5 DC-9s and a 727-200 from […]