It was surprising in May when Aeroclassics announced they were re-entering into the fierce market for 1:400 scale modern Boeing narrowbodies. The Aeroclassics A320 family moulds have presumably been lucrative since they easily outclass the competition from JC Wings, Gemini Jets and Phoenix; however it’ll be interesting to see how the Aeroclassics MAX fares when they are competing against excellent versions from Panda and JC Wings/Gemini Jets. At least you can rely on Aeroclassics to not always follow the obvious releases. This Mauritanian MAX is a great example of Aeroclassics’ sometimes unusual but often delightful release selection process.

Mauritania is a huge country in West Africa that despite its size, in the West, is probably one of the least identified African states.  Even though it is the 28th largest country in the world it has a population of fewer than 4.5 million people, no doubt largely because much of its land surface is part of the Sahara Desert.

The nation has seen the sort of upheaval that Westerners typically expect of Africa in recent decades with several coups, firstly to depose Maaouya Ould Sid’Ahmed Taya, who had led the country for 21 years until August 2005, and then to depose the democratically elected Sidi Ould Cheikh Abdallahi. The current leader is the ex-General Mohamed Ould Abdel Aziz.

Regardless of the political machinations Mauritania is a poor nation and still struggles with such issues as slavery. Given the low GDP and political instability it is no surprise that the aviation environment is also challenging. Air Mauritanie, which had been formed in 1962, collapsed in September 2007 and was replaced three years later by Mauritania Airlines.

Based at Mauritania’s capital city Nouakchott the new airline has somehow managed to build up a relatively modern fleet consisting of a single ex-Aeromexico Connect ERJ-145, a couple of ex CSA 737-500s, an ex-Air Senegal 737-700 and a 2016 build new 737-800; these operate a regional route network connecting three Mauritanian cities with mainly African destinations (such as Abidjan, Bamako, Tunis, Casablanca, Brazzaville, Dakar and Freetown) but also extends as far North as Gran Canaria, Spain.

The order for a single 737 MAX-8 was announced in June 2017, having previously been undisclosed. Unsurprisingly it was a proud day for the young airline whose CEO Mohamed Radhi Bennahi said:

“This aircraft will play a major role in growing our business in the years to come.”

The aircraft became the first MAX operated by an African airline on December 21, 2017 when it was delivered and Mauritania Airlines has plans to initiate new services to Paris and Jeddah (Mauritania is predominantly Muslim) using the new type. It is certainly nice to see an African flag carrier growing and hopefully the MAX can assist Mauritania Airlines in bringing prosperity to its home country.

I have reviewed all three of the other available MAX moulds on Diecast Flier but has Aeroclassics saved the best until last? Not really, no. Nevertheless this new mould has some good points. The nosecone and cockpit area are sound, although the underside of the nose doesn’t curve as gently upwards as it should and is too steep. This leads down to the nosegear, which as with the Phoenix MAX is an area of major concern.

Firstly the nosegear doors do not sit nicely against the fuselage but interrupt the line of it. The nosegear doors also look a bit large – or perhaps it is just that the nosegear itself is way too small and short. As with the Phoenix mould Aeroclassics don’t seem to have taken into account that the MAX has a longer undercarriage leg than the 737NG family. It leaves the aircraft looking more like a 737NG from the front.

The gear leg is too short and the nosegear tyre is tiny. It also totally lacks a wheelhub and is just a tyre on a spigot. This is a common Aeroclassics trait and forgivable in older aircraft types, however the MAX has a large tyre hub and it is a lot less forgivable with a new mould and modern aircraft type. The maingear has exactly the same issue – the tyres look poor in comparison to say the JC Wings MAX mould and nothing like the real thing.

The engines and pylons are good and the rest of the fuselage is well shaped. Of course this being Aeroclassics there are no aerials (on a modern aircraft I think this is a major failing especially when all your competition has them but it is Aeroclassics choice not a mistake) however the aircraft is fitted with a satnav dome on the fuselage roof. The shape of the dome is ok although it doesn’t really meld into the fuselage as cleanly as it ought to at the sides and front.

The vertical stabilizer and the winglets are generally fine although they perhaps lack some of the sharpness present in the JC Wings mould. The wings themselves lack almost all detailing of the control surfaces (ailerons and flaps). There is some if you look very closely and it maybe that the paint has just been applied too thickly obscuring them. I get the feeling it is both they are too fine and the paint has been applied badly. The rudder and horizontal stabs don’t suffer in this way.

So overall where does that leave this mould? It isn’t a patch on the JC Wings or Panda versions and I am far from the only person to say this. The undercarriage is clearly fixable and aerials could be added and the mould would be the much better for it.

Mauritania Airlines has a curious scheme that looks rather unfinished, especially on the tail. It is actually a quite simple blend of yellow and green on a white background. The MAX is enlivened slightly by a quite subtle ‘1st Boeing 737 MAX’ logo almost hidden forward of the engines under the low thin cheatline stripe. Aeroclassics has got the colours down pretty well and the position of the major fuselage and tail elements is good. That praise doesn’t extend to the engine nacelles where the twin stripe logo is printed much too high. The winglets should also have a white base colour on the outside and inside but on the model they are grey. 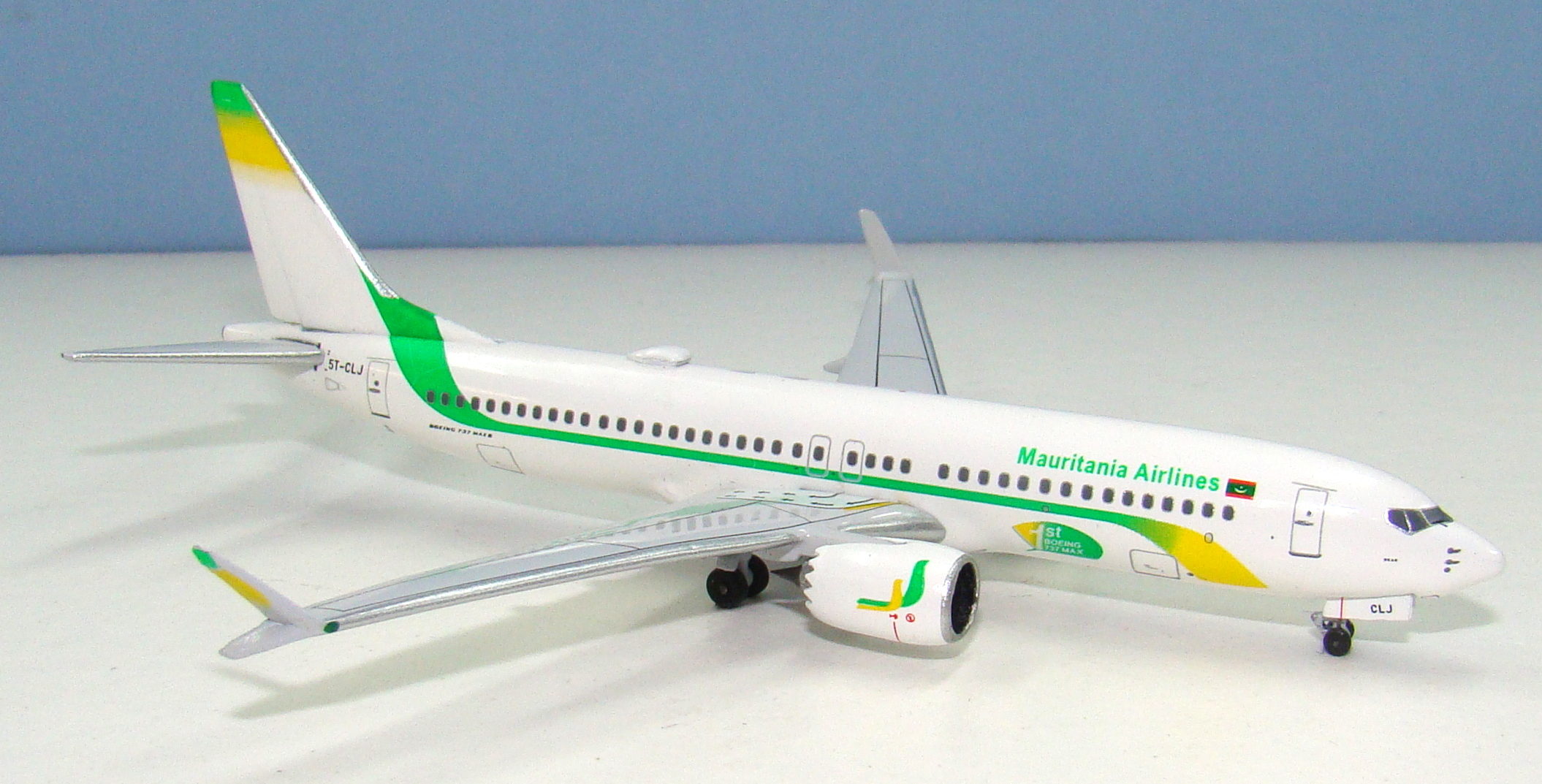 The green of the livery fades gradually to yellow via a dot style matrix in the real thing and this is difficult to reproduce in 1:400 scale I am sure. Aeroclassics just about carries it off on the tail and things start promisingly on the forward cheatline too before fading out way too early. The green elements should continue down to the base of the stripe as it curves under the fuselage but on the model finish much too high. The result is there is too much block yellow.

Another problem is the national flag by the titles. The green should be the same as that used on the rest of the livery but Aeroclassics has instead used a much darker colour for the body of the flag. It is wrong and stands out rather oddly.

Printing is good but not great. What is present is fine and especially so on the underside and around the tailcone. Aeroclassics doesn’t bother with nosecone print lines and that is fine as they are often very hard to see anyway. However comparing it to the JC Wings MAX once again and the model is lacking extra details in areas like the passenger doors. 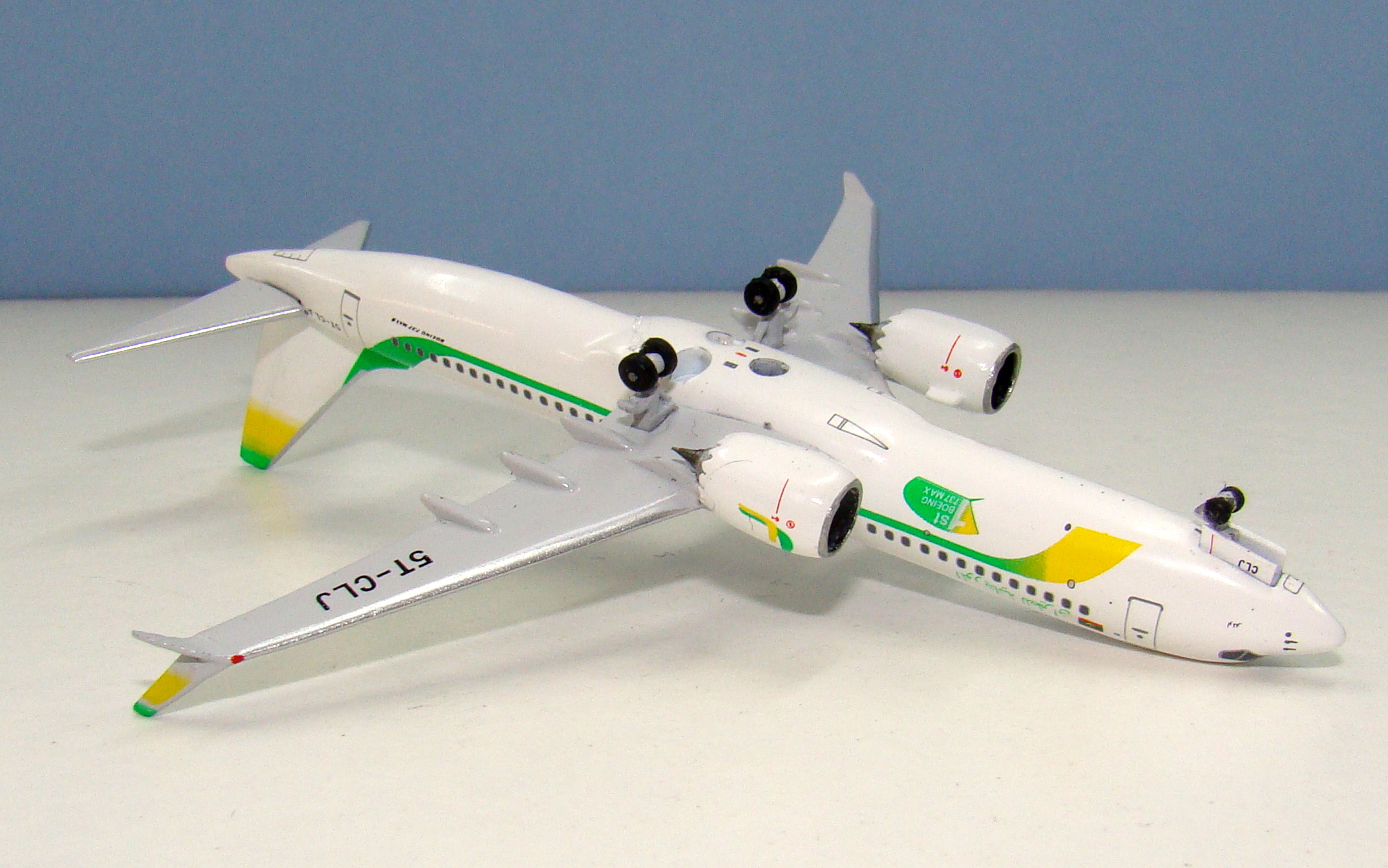 The engines are also not great from a paint perspective. The silver rims are way too thin and Aeroclassics has taken to painting the inside of the engines pure black. It’s better than silver I guess but just as inaccurate.

Lastly build quality looks good until you stare at the model from the front. The starboard wing is noticeably lower than the port wing. I’m not sure if the wing is bent or the fit with the fuselage isn’t correct. In other respects the model is built well.

I really wanted to like this 737 MAX, especially as by being honest I am likely to get a blasting from Aeroclassics owner. There is a good mould and model in here fighting to get out and I’d still buy this mould when it is used for unusual and interesting airlines like this that nobody else is likely to make. However as with the Phoenix MAX I can’t highly recommend it when there are two superior moulds on the market, which not only are structurally better but also tend to come with better printing too.

It is perhaps a sign of its growing obsolescence that in almost 3 years of reviews I’ve never reviewed a single 767-300. The type has a long history in 1:400 scale but there are a […]

LEAP into the Future: Airbus A320-251neo D-AVVB by Panda Models

Panda Models have shown an agility and willingness to improve that the larger manufacturers have struggled to compete against. They may have had a shady start, with accusations (almost certainly truthful) of mould stealing and […]