NG Models has been rapidly expanding its mould portfolio and although the general opinion is that its models are excellent this author is a little disappointed to find more A330s and 787s and less Tristars and 757s. Yes, I understand the financial imperative and NG’s desire to compete for the lucrative business of the modern collector; but it is classic aircraft that are a lot more interesting, and in my opinion deserving too. I doubt there is room for this many major players in 1:400 and it is likely that one of Phoenix, JC Wings / Gemini, Aviation400 and NG will fold, with my money on the former. Despite my opinion I am still rather partial to the odd A330 and so this week I’ll take a look at the competing NG mould. 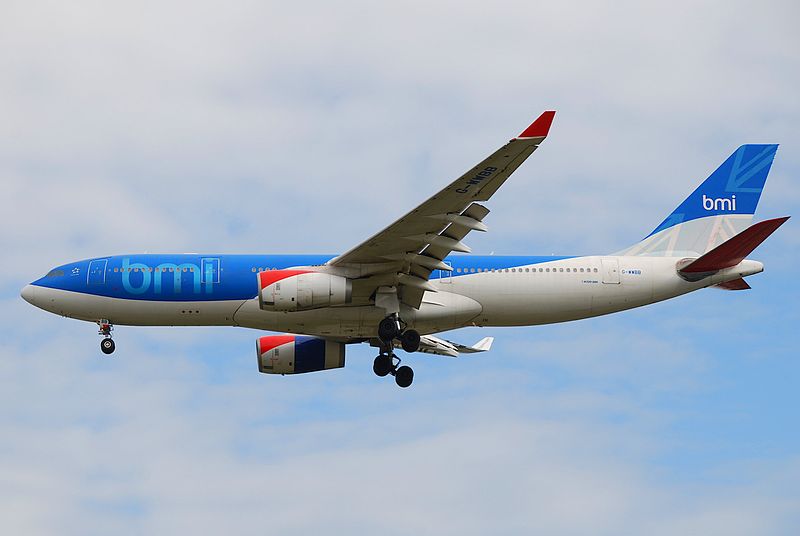 Despite for decades being the second largest aviation market in the world the UK has always struggled with the concept of two major international scheduled airlines. The original second-force, British Caledonian, was never successful enough to in the end avoid the predatory glare of British Airways and with them gone Virgin and British Midland became the de-facto competition from Heathrow.

British Midland had dabbled in long-range flying during the 1970s with ABC charters to the US using 707s, but in the end used the four-holers more for lucrative wet-leasing arrangements than their own flying. Nonetheless the airline successfully gained its foothold at Heathrow during the 1980s and became a major competitor to BA on both domestic and European trunk routes. 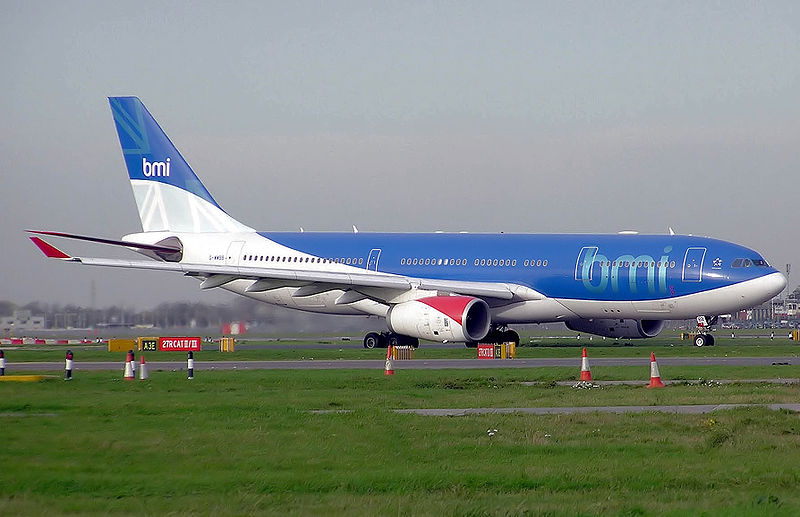 By the late 90s BMA was part-owned by Lufthansa and joined the Star Alliance in 2000. It was also looking for new avenues, and restricted from flying long-haul routes from Heathrow by the Bermuda II agreement, it decided to start flying long-haul from the regions instead. Along with this went a major rebrand to BMI in 2001 and the delivery of its three new A330-243s, leased from ILFC.

G-WWBB was the last of the three and arrived on May 30th just over a month after the first, G-WWBM. The A330s started operations from Manchester to Washington Dulles and Chicago O’Hare. The early 2000s were a period of strong growth and financial success for the airline with 10.1 million passengers in 2005 making it the UK’s third largest airline.

The long-haul flights were not a complete success. The Washington route was first downgraded to a leased 757 before being completely axed in 2005. One the plus side BMI did gain access to India from Heathrow with a Mumbai service launched in May 2005, although this too lasted only until October 2006. Riyadh service began in September 2005 and the carrier increasingly focused on Middle-Eastern routes but the future was not rosy.

Strong competition from low-cost carriers, increasing operating costs, a rather muddy strategy and the global financial crisis had negative impacts on the airline. The BMI Group, which had been profitable made a staggering GBP155.6 million loss in 2008 and would never return to profitability. All long-haul flying from Manchester was ended in November 2008 and the A330s transferred to Heathrow.

From that point it was a downward spiral for the airline and it was finally sold to British Airways with the last BMI flight taking place on October 27, 2012. The A330s of course went on to other owners. G-WWBB left the BMI fleet before the end and was leased by ILFC to Sri-Lankan in July 2010 as 4R-ALG. Since April 2016 she has been in service with the Turkish carrier Onur Air.

You’re just not anybody in 1:400 nowadays if you don’t have an Airbus A330 mould to use and literally everyone has one now: Aeroclassics, Aviation400, JC Wings / Gemini Jets, NG Models, Panda and Phoenix. Most of them are pretty good but as my previous reviews have shown the Aviation400 and JC Wings / Gemini are the two weakest contenders.

Most NG Models moulds have had quite a lot of praise but it is the more modern types that have had the most criticism even though both their 787 and 737-800 are close to, if not, the best in their class. The A330 too is a strong mould and stand up well against all the competition.

The fuselage shape of the mould is very accurate. The nose is pointy but not too pointy and the undercarriage is perfectly positioned and the correct height. The control surfaces are also excellent. As this is an A330-200 the vertical stabilizer is correctly slightly larger than that of the A330-300 but the horizontal stabilisers are the same size (something the Phoenix mould has had incorrect for years and years).

The one place where this mould stands out for both good and bad reasons is at the engines. Firstly on the good side they are very nicely shaped, come with see through inners and have excellent fan blades. This is a cut above all the competing A330s aside from the Aviation400, but that mould has a much inferior cockpit, nose and nosegear.

On the negative side the engines do hang too low. There is still ok clearance, and the A330 engines do hang surprisingly low, but the engine pylon on the NG mould drops too sharply where it joins the wing. The rest of the pylon is great but this initial drop leaves it and the engines lower than they should be.

The NG mould has the four main aerials and the small forward rooftop dome. All are well sized and finished. The result for the NG A330 is that it is nearly perfect, but not quite due to the engine pylons. It is still comparable with the very best A330 in 1:400 (which for me is probably the Panda Models version) and in truth any of the Aeroclassics, NG Models, Panda and Phoenix A330s are very strong. 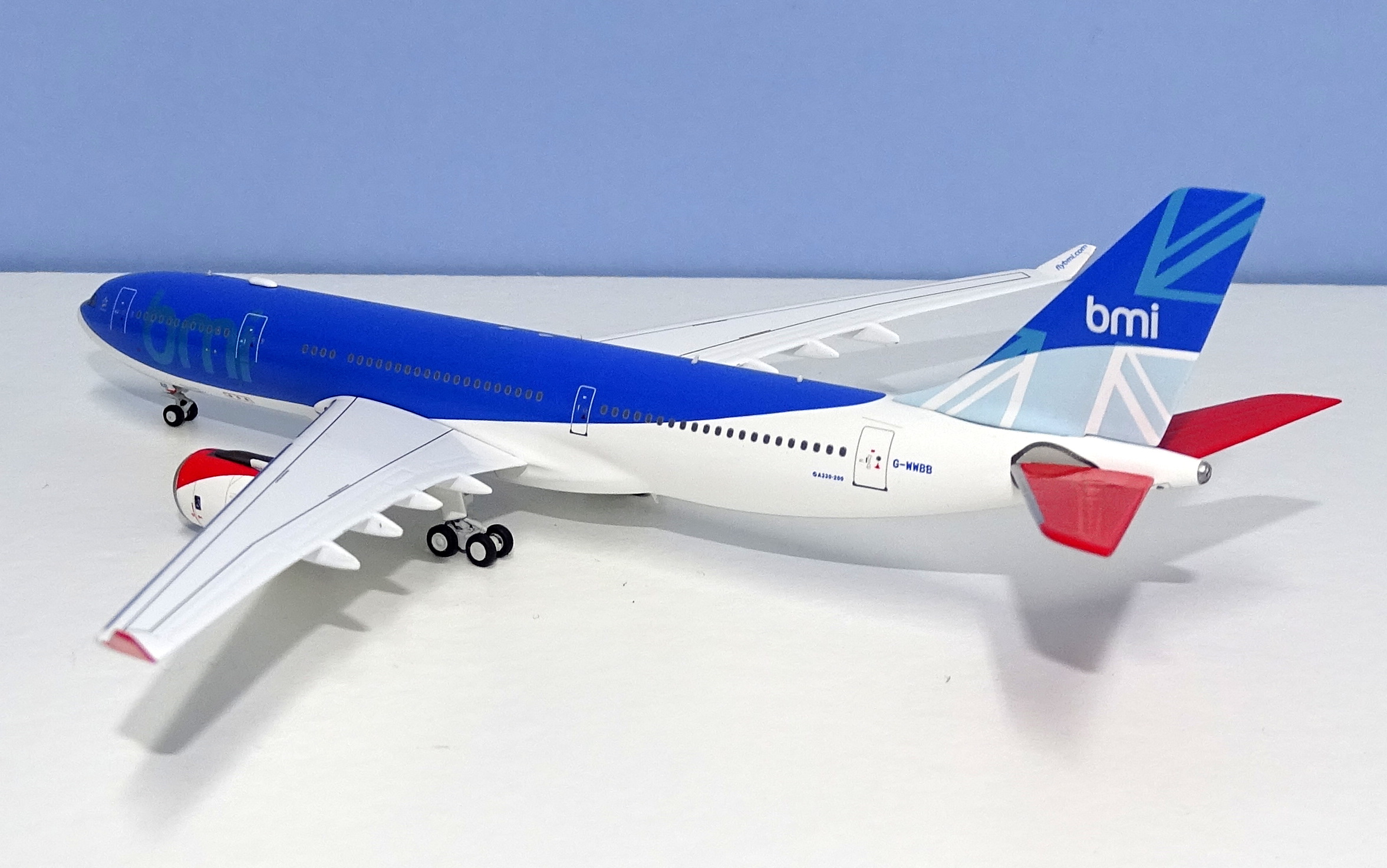 The BMI scheme introduced in 2001 is in my opinion one of the most attractive and delightful standard liveries ever worn by an airline. It manages to be both modern and classy yet colourful at a time when most airlines were, and continue, to go with tedious eurowhite schemes. It is however bloody hard to reproduce in 1:400 scale. 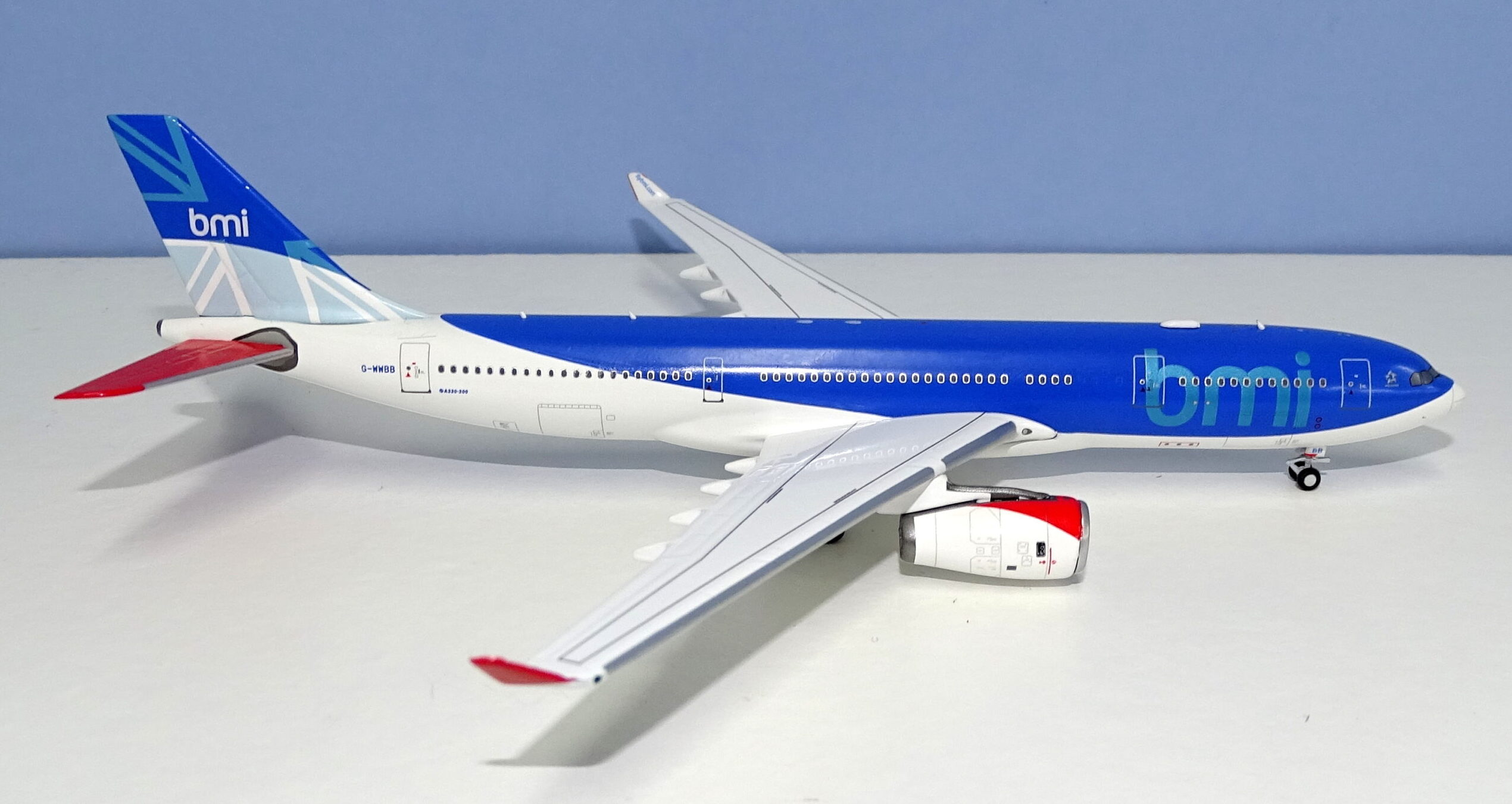 There are also actually two versions of the livery. Initially the A330s had small British Midland titles above the BMI but these were removed as people got used to the name change. The Gemini model from many years ago has the extra titles while this NG version does not.

My view of the colours on this model are that the blue is slightly too dark and is a bit too dull. Oddly the blue actually looks much better in the photos here (which use flash) than on the model in real life. The bmi titles themselves are difficult to judge as they appear to change at different angles both on the model and in real photos. The iridescence is hard to replicate at 1:400 but I think NG have done so well enough.

The lovely faded Union Jack on the tail is very good and position and angle of the sweeping blue on the fuselage spot on. What isn’t spot on are the red triangles on the engine cowlings. They are too small and should be much closer to the Rolls-Royce logo.

Printing detail has become one of NG Model’s greatest strengths and there is an amazing level of it across the model. The engines themselves are bursting with panel lines and other markings all defined with the lightest touch. One area that has been criticised with the NG A330 however is print related and that is the height of the main windowline. I have to say I agree it isn’t quite correct, although the distance it is out is small, say half a mm.

Build quality would be perfect if it weren’t for the fact the model came with the right-side engine and pylon detached. They didn’t look like they had much glue on them but small detachments like this are reasonably common when parcels have to travel long distance. It was easy enough to reattach and there was no damage to the model.

NG Models are excellent but they are not the second coming either. Several of their moulds have shown some recurring issues (787 maingear height, 737 nosegear height, A330 engine clearance and windowline, angle of engines on L-1011s) but they still produce some of the best moulds out there in the market. This is actually the lowest score an NG review has ever received from me, which says something really as if 25 is as bad as it gets then you know you can largely rely on NG’s models.