Only last month I reviewed a Republic Convair 580 and said how excellent it was that the airlines of Northwest’s heritage were getting some belated attention. The announcement of 5 DC-9s and a 727-200 from Aeroclassics have added to the available fleet significantly and after being avoided for some time it is good to see that Republic’s last livery is firmly in the headlights both in full and in several Northwest hybrid versions.

As related previously, by 1984 Republic, in an attempt to grow to a size whereby it could become a nationwide airline, had bitten off a lot more than it could chew. The amalgamation of Hughes Airwest was a disaster and was one of the factors that led to the firing of the board and the hiring of Stephen Wolf.

One of the big changes that Wolf brought in was a new image for the carrier, which now served more destinations in the USA than any other. This involved dumping the old-fashioned and traditional Mallard duck inspired scheme that had served North Central (in various guises) so well as a local service airline.

Herman the duck was relegated to a small version of himself, next to the boarding door, and the new scheme centralized around new Republic titles using a typeface reminiscent of that used on ‘The Mary Tyler Moore Show’. This sitcom had been hugely popular during the 1970s and had run for 168 episodes over 7 years. Due to the similarity of the text the scheme became known as the Mary Tyler Moore (MTM) scheme.

Republic had accumulated a huge fleet of 133 Douglas DC-9s from the combination of the fleets of North Central, Southern and Hughes Airwest. Twenty-eight of these DC-9s were the stretched DC-9-51. North Central had accepted their first DC-9-51 in April 1976 and received nine up to March 1977. There was then a break before a further six arrived in 1978. Following the name change to Republic deliveries continued with the last new aircraft arriving in April 1981. Deliveries switched over to the newer MD-81 in August but only 8 aircraft were received, part of an original Southern Airways order.

Many, but not all, of the Republic fleet were repainted into the MTM colours prior to the Northwest takeover in 1986 and the DC-9s would famously go on to have impressive longevity with the successor airlines. N768NC was a good example as she was delivered new to North Central on May 27, 1977. She passed through the fleets of Republic and Northwest until December 31, 2009 when she was subsumed into the Delta Air Lines fleet following their merger with Northwest. She kept the same registration her whole career and wasn’t retired until June 1, 2011. 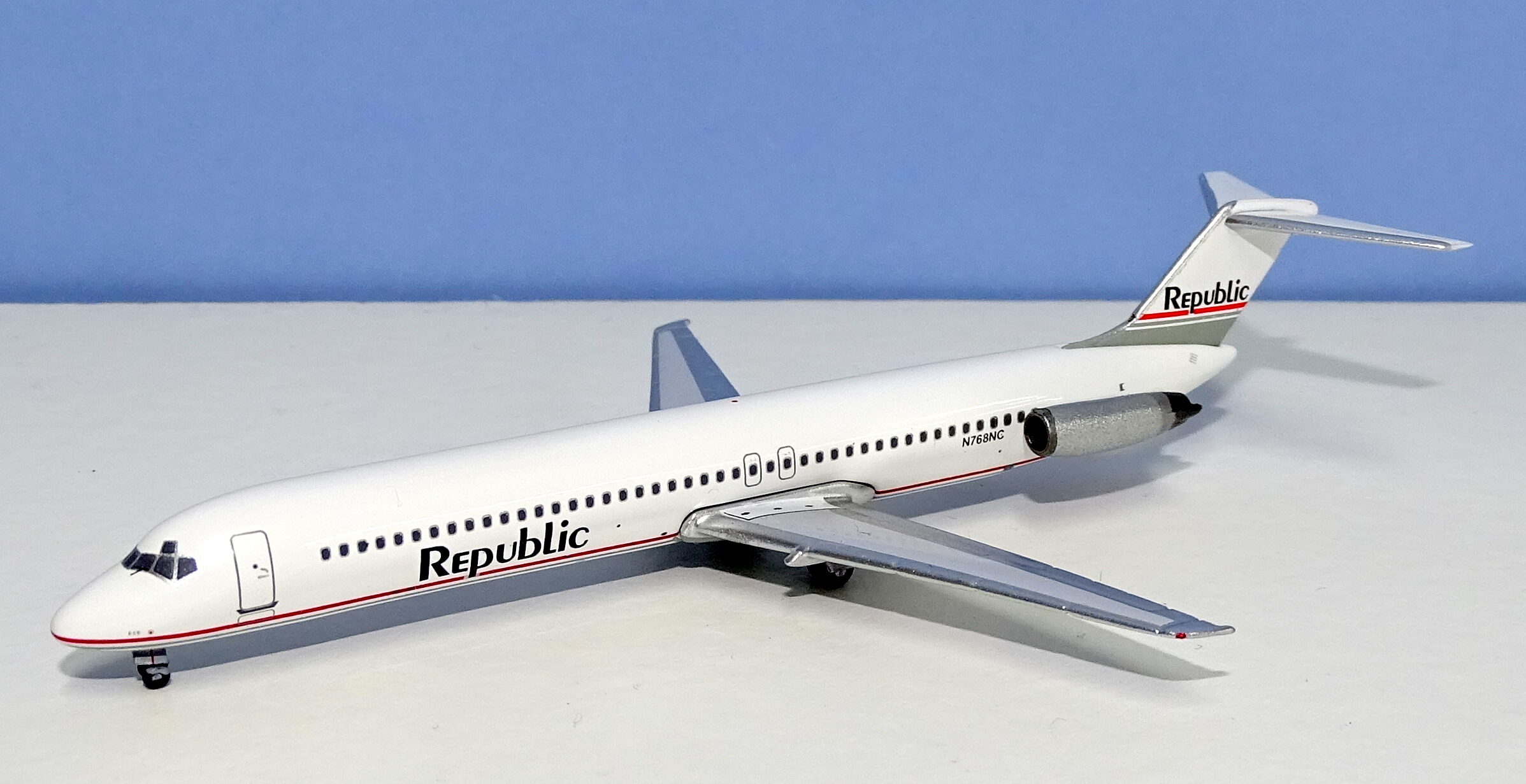 Unlike the shorter DC-9-30 the DC-9-51 has received a lot less attention in 1:400 scale and there are only two moulds in existence. One is a 2004 effort from Seattle Models Co and the other is this 2007 debuted Aeroclassics mould. The SMA mould was only used 8 times (and only twice by SMA) but is markedly inferior to the later Aeroclassics version. The main fault of the older mould is the heavy rather Snoopy-like nose radome.

The Aeroclassics DC-9 does not have any issues at the nose and is one of the best moulds available to them (up there with their Boeing 707 and McDonnell Douglas DC-10) and anyone in 1:400. The fuselage shape of is picture perfect and the nosecone shape, essential to it looking like a DC-9, is super-accurate. 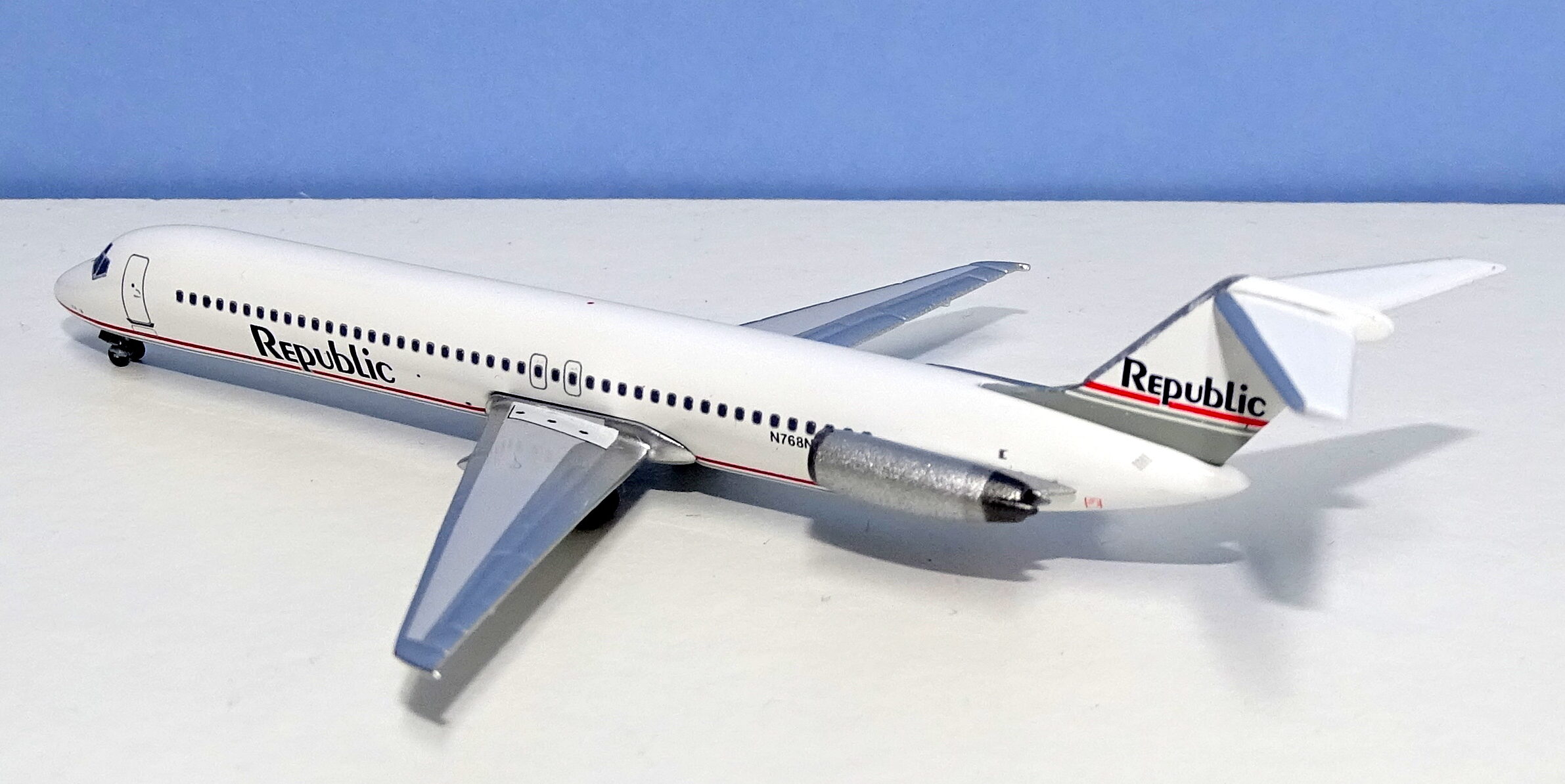 Aeroclassics usual simple landing gear fits these smaller narrowbody moulds perfectly since the simple style tyres on spigots allows for the small tyre size required and there is no need to create needless complexity with rolling gears. The nosegear is well placed and suitably small, as is the maingear.

The wings are detailed and thin, the engines perfectly sized and mounted and the rear fuselage and vertical stabilizer faultless. Criticism could be aimed at the cradle mounting of the wings but the seam is small, discrete and follows the fuselage fairing shape. There are of course no aerials in keeping with Aeroclassics’ philosophy but their absence is no loss here.

Aeroclassics DC-9s are delightful models and I can’t recommend them highly enough. I can repeat my previous calls for a version of the shorter DC-9-10 using this mould as its basis though – that would be awesome.

In 20 years, there have now been only two attempts at the MTM scheme in 1:400 scale, including this one. The previous attempt is a 2018 release NG Models Boeing 757-200, which like this model was part of a series of releases featuring both hybrid schemes and others in the same lineage of airlines. Frustratingly both attempts at this scheme appear to make the same mistakes.

The Wolf-era Republic scheme is actually quite simple but has colours and details that have caught both manufacturers out. Firstly, the colours. The shade of grey being used here is good and matches the real thing no problem. Interestingly the new Republic titles are not black but a very deep shade of blue. This rarely is apparent in photos and to be honest there aren’t that many about of high quality anyway. Both Aeroclassics and NG Models opted for black and at this scale it has no impact on the model. I’m minded to dock no points for this.

The other colour of the scheme is a deep red, a kind of brick red. Both NG models and Aeroclassics once again have gone for the same colour here and it is a little too light, more a straight red. Especially on the DC-9 it doesn’t make a lot of difference since it is used sparingly.

The placement of the main livery elements and the title font are all fine but one other detail is missing and arguably it isn’t a fault of the model. Nonetheless, it is a little annoying and once again NG Models also made this ‘error’. This is Herman himself. On the MTM scheme he was placed behind the L1 and R1 doors albeit very small – you can just see him in this photo of a DC-9-51. He is missing from both the DC-9 and 757 and to be fair I can see from the photo that Aeroclassics used the DC-9 didn’t have it. It does look like Herman either wasn’t applied fleetwide or was removed at some point, and it is a small detail, but anyone with knowledge of this scheme doing the artwork would surely have used images with Herman on them.

So, in summary this is a good livery reproduction but not perfect and just as I’m writing this, I noticed that the registration should also be grey not black. The fleet number, 859, is also missing above the cockpit windows but is present above the nosegear.

I am super happy to see that Aeroclassics have resolved their issues with the placement of the cockpit windows on the DC-9s.  All five of the recent DC-9-51s look great in this respect. The rest of the printing on the model is solid and reliable with no faults. Aeroclassics also have managed to paint the interior of the engines this time too. There is one minor paint issue in that the left-side nosegear tyre is not fully painted black.

The DC-9 mould is simple and solid. This model has a tight fit between the wing cradle and fuselage. There are no build issues.

This is a strong release on one of Aeroclassics best moulds. The result is the sort of excellent classic 1:400 Aeroclassics have been renowned for historically, but have of recent struggled to achieve. All of the recent DC-9s are good (although the tail colours on the Northwest red tail version is typically way too dark). In the area of US airlines from before the year 2000 Aeroclassics has almost no competition nowadays and I hope to see more great models like this, and even some more MTM DC-9s.

Chinese airlines are well covered in 1:400 scale but among the third tier of Chinese airlines there are surprisingly still models yet to be made and niches that can be filled. Lucky Air for example […]

About the only ones who can withstand an opportunity for a special livery less than the Chinese airlines are the China based 1:400 scale model manufacturers so it is no surprise at all that hot […]