The ascendancy of NG Models in 400 scale continues apace with the introduction of their new Airbus A350, a mould that has seemingly gained more excitement than their 747SP. This is despite there being multiple existing A350s from other manufacturers, several of which are already fine castings. So far 6 NG A350s have been announced, four of which have been released. In keeping with NG’s eclectic mix of releases one of these has been a bizarre EasyJet fantasy effort but the others are more typical efforts competing squarely with the other brands. In the case of the pair of Malaysia A350s it is Phoenix and Gemini Jets that they are up against who had 2017 and 2018 efforts.

Few airlines can possibly have had a period in their history as tumultuous and remained in operation as that suffered by Malaysia Airlines in recent years. As a legacy national carrier, it was already struggling to compete against low-cost incursions into its market from AirAsia and successful transit competitors like Singapore. Government interference saw regular changes of leadership and stifled attempts to change the fabric of the company. Then of course there has been the loss of two aircraft, both in highly controversial and public circumstances.

Throughout all this chaos the airline appeared to be steering a path away from the brink by trimming its fleet and network but the arrival of Covid has of course been another major setback. Recent news suggests that the state fund Khazanah, who is the sole shareholder, is threatening to liquidate the airline if negotiations with leasing companies to dramatically reduce costs are not successful. The alternative plan is to coalesce a new airline around the regional subsidiary Firefly, which currently flies only ATR-72s.

In the meantime, Malaysia Airlines continues to fly and is gradually ramping up its schedules. It remains the flag carrier for the nation as is exemplified by the Negaraku livery worn by several members of its fleet. The Negaraku is the name associated with the Malaysian national anthem and is part of a nationwide movement aimed towards fostering unity and a spirit of patriotism.

“The Negaraku livery embraces the spirit of nationalism, carrying with it the essence of the unique Malaysian values across the world.  It is also an important symbol of the good progress seen in the turnaround plan, as the national carrier rebuilds itself, whilst flying the flag across the skies as it works to become the pride of the nation again. We thank the Prime Minister for the Government’s strong and continuous support for the restructuring, which has been an important component contributing to the progress of our efforts so far.”

The livery has since been worn by other types and adorns half of the six strong Airbus A350 fleet (9M-MAC, MAF and MAG). The A350s are leased from Air Lease Corporation and MAG as the last unit arrived in July 2018. Currently the A350s are utilised on a reduced schedule to London Heathrow, Osaka Kansai and Tokyo Narita. 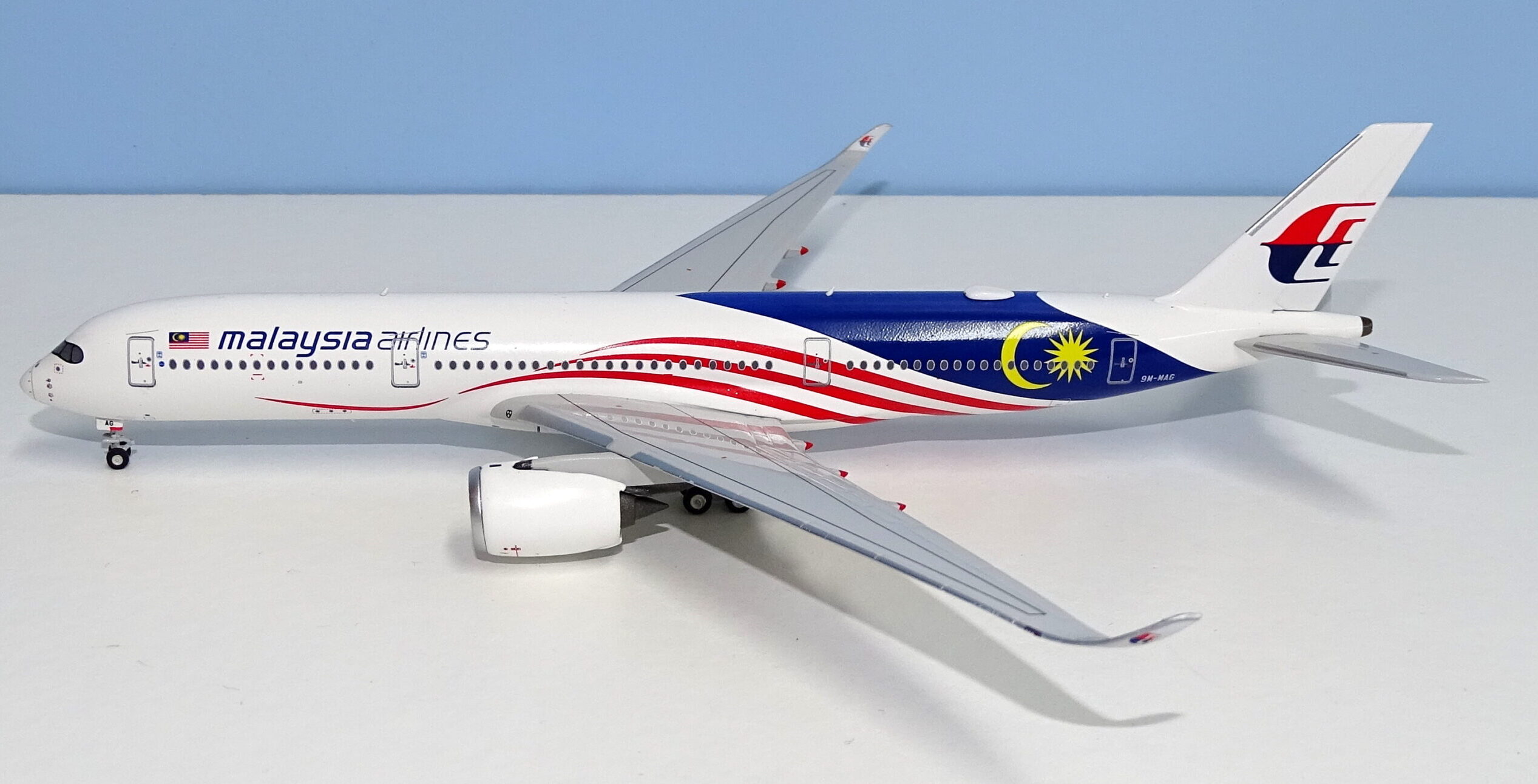 As is standard I was sent the sample versions of this mould prior to it being released and as per usual NG have diligently resolved the small issues the samples presented. Looking across the mould and starting at the front the nose is probably the most accurate of all 400 scale A350s to date. The NG version has a more pronounced, and accurate, angle change under the cockpit. It also has a smaller and better sized nosegear door. The smaller gear door gives the NG a slightly higher look than the AV400 but it is largely an optical illusion. 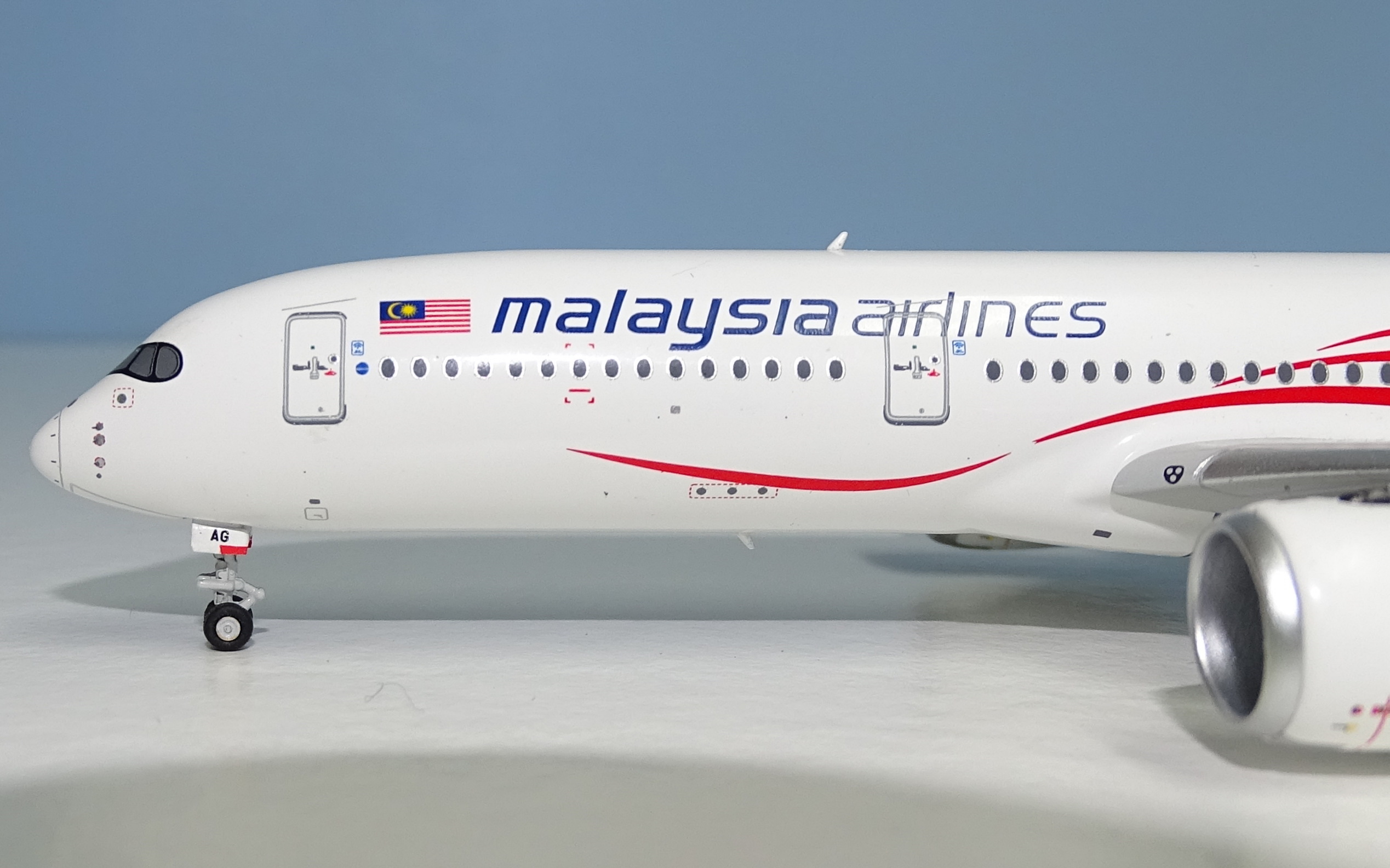 In most other areas the NG mould is of a similar high quality to the Aviation400, and sometimes slightly superior. For example, although the engines and pylons are comparable the NG has a superior rear underwing engine pylon shape. Also, the maingear on the NG is a better shape, but on the flipside it doesn’t move like the AV400 one does.

The engine fanblades are also a better combination of blade and gap than those of the AV400. There are 22 blades compared to 18 on the AV400 mould and this is more realistic and means the gaps between blades aren’t too large.

At the rear of the fuselage the join of the vertical stabiliser to the roofline is better than on the AV400, as is the shape of the squared off tailcone. One area where the AV400 mould wins this tight contest is fuselage detailing. The underside scallop intakes are moulded in on the AV400, but only printed on the NG mould, while of course Aviation400 famously add navigation beacon lights to their moulds. 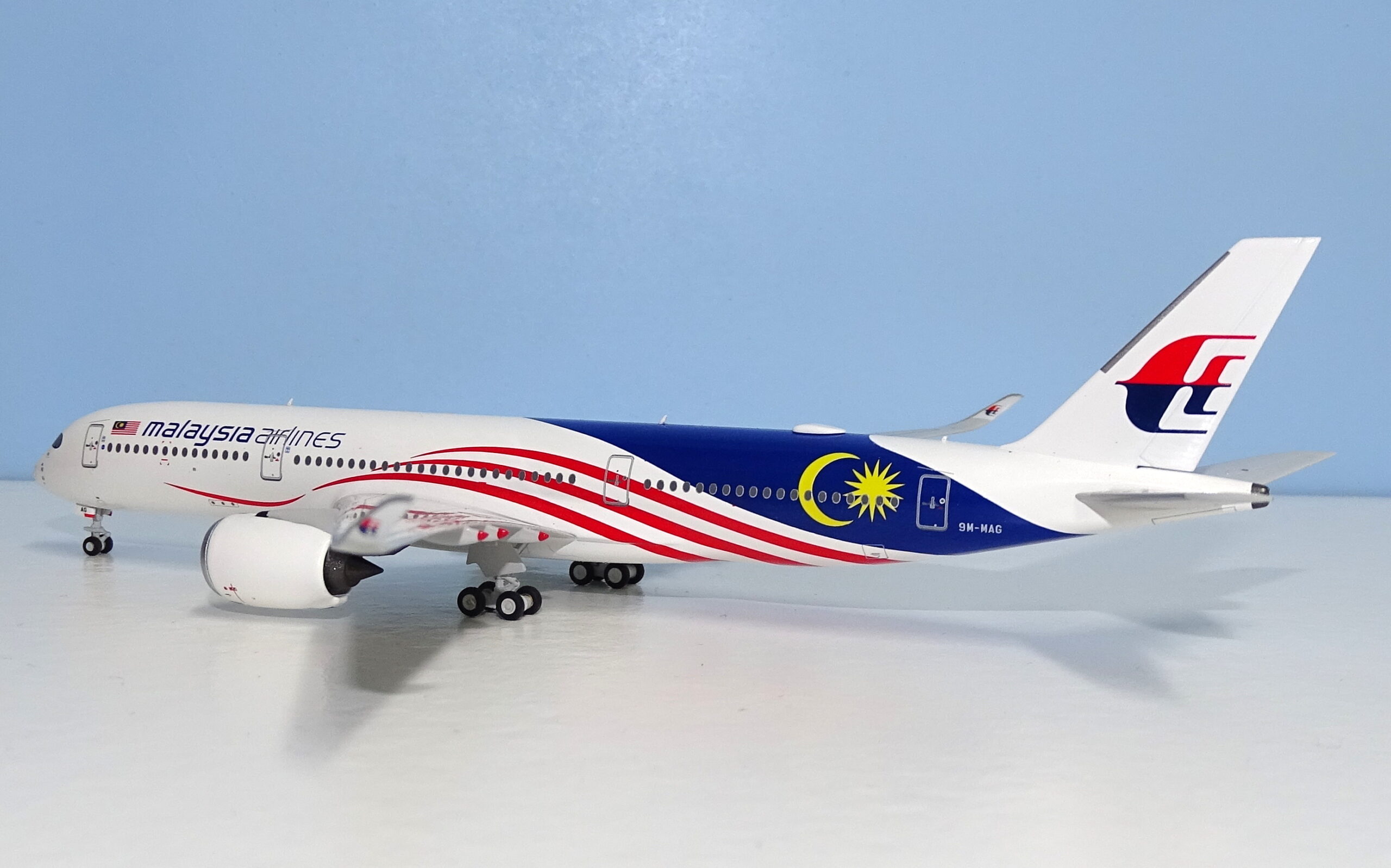 Ultimately comparing the NG Models A350 with the Aviation400 one is an exercise in comparing excellence and picking minor differences. Both are very good but it is the NG version which wins on a pure scoring basis. In my previous detailed review, the NG got 32 out of 35 and the AV400 26 out of 35. That is the difference in my opinion between a 9 for the AV400 and a 10 for the NG. 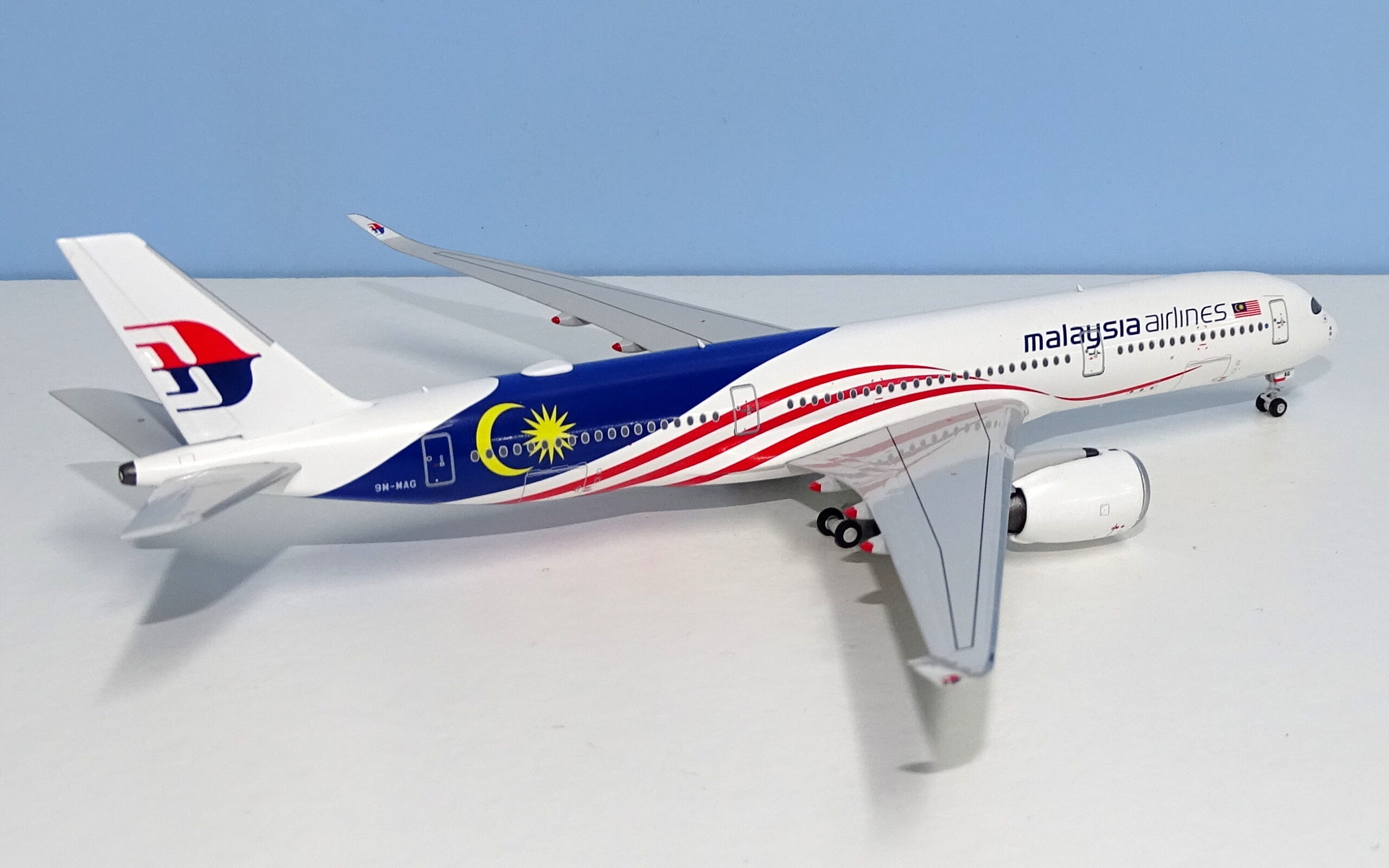 Malaysia Airlines has had a variety of separate liveries in recent times. These have included the original 1990s livery, two versions of the new standard scheme (with different titles), a blue A380 specific scheme and a variety of special liveries of which the Negaraku is most common. For me the Negaraku is the most attractive as it uses a huge stylised representation of the Malaysian flag on the rear fuselage. 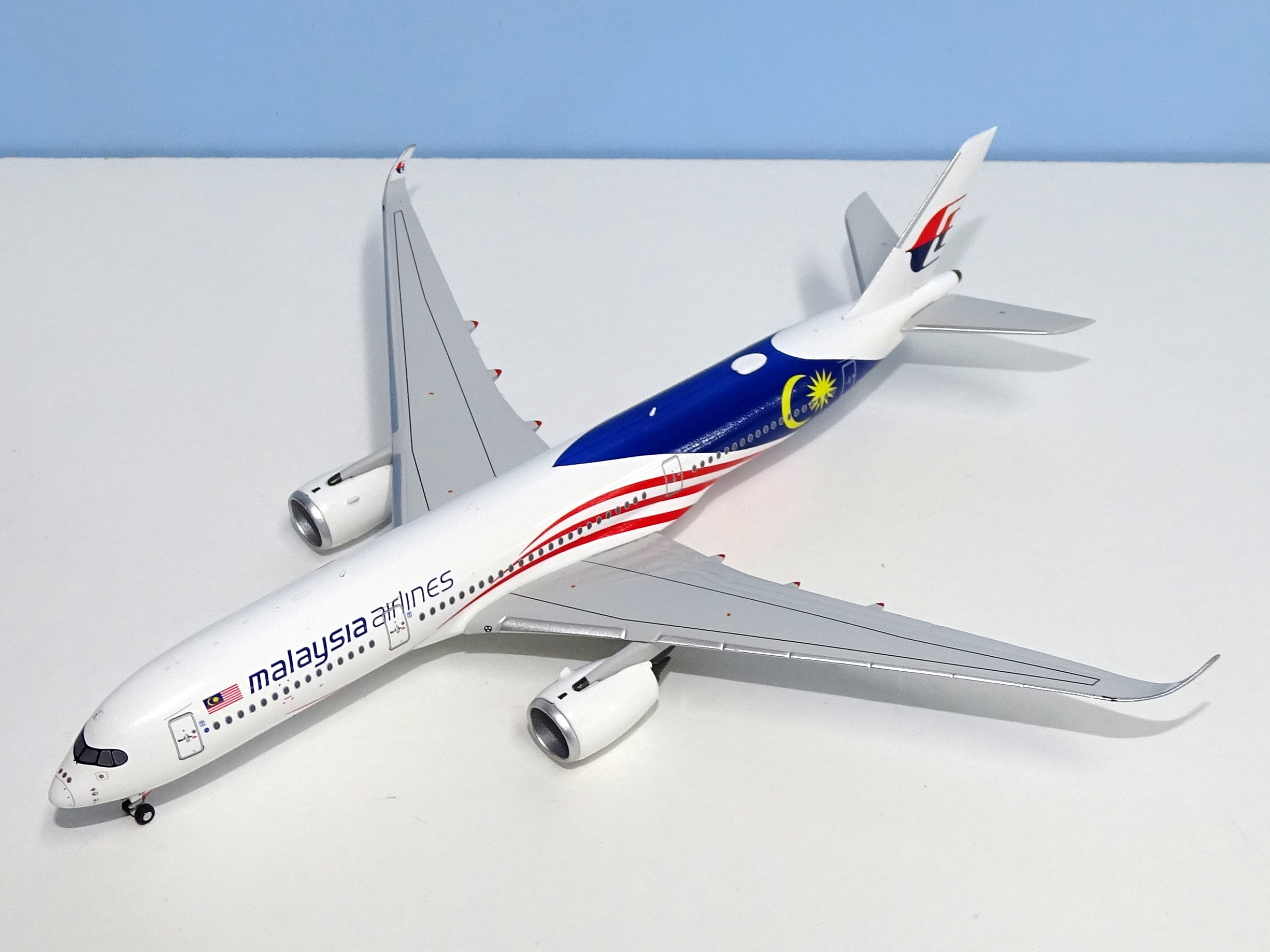 The main colours of the scheme are a medium red and a deep blue. The reds of the flag and moon kite airline logo are the same but the blue of the lower half of the kite is darker than the blue of the Negaraku flag. I am happy with the shades that NG Models are using for the model. The yellow for the crescent and the 14-point Bintang Persekutuan star looks fine too. 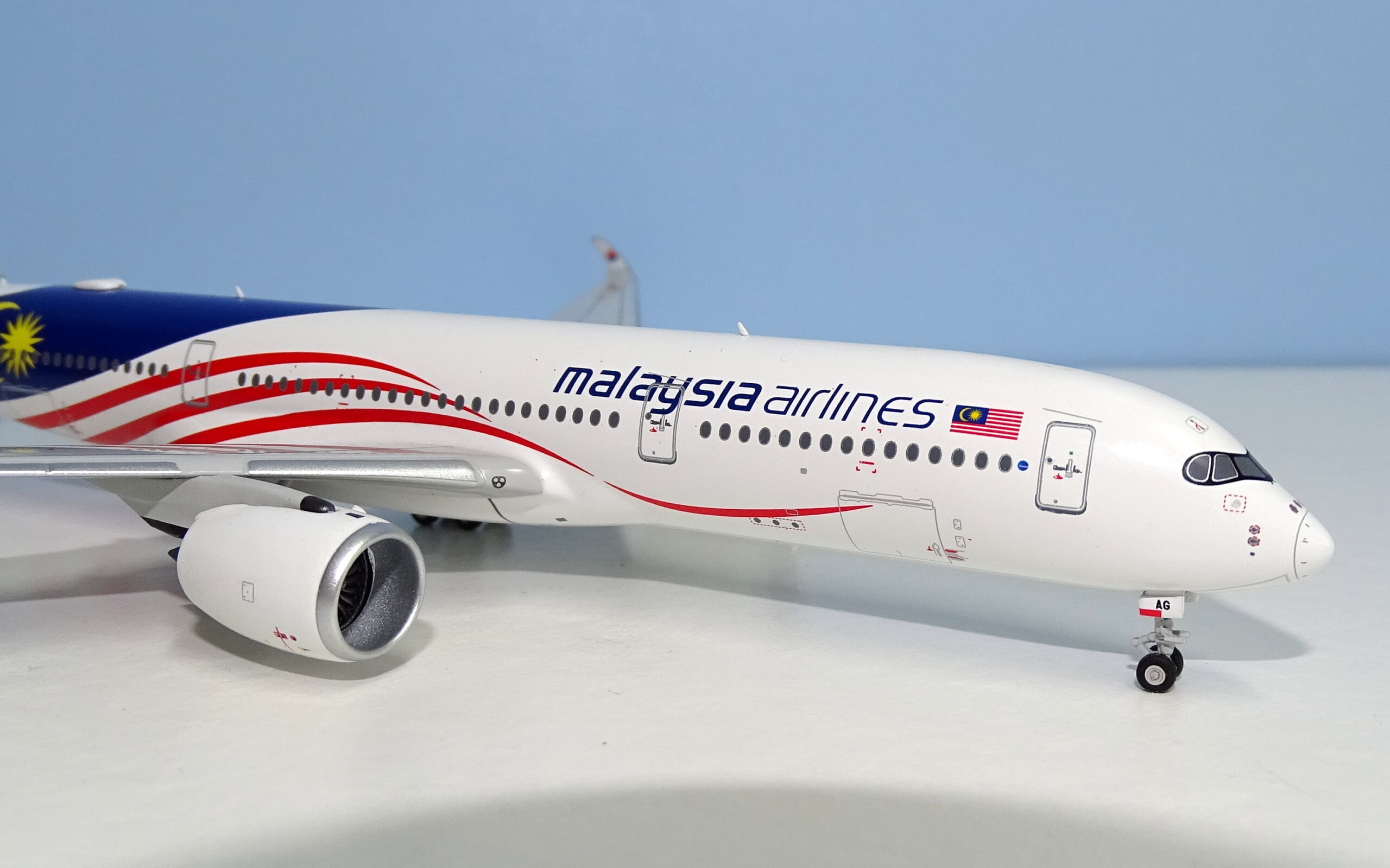 Unlike the Iranian SP the positioning of the livery elements on the fuselage here is impeccable. Either side of the Sharklets has the moon kite logo applied but the left side outer winglet does not have the logo applied as well and the nose is slightly cut-off by the leading edge.

The main titles are the correct size and use the correct font but both portions, the thicker Malaysia and the finer airlines, are too fine and not chunky enough. On the whole this is a good rendition of the livery. 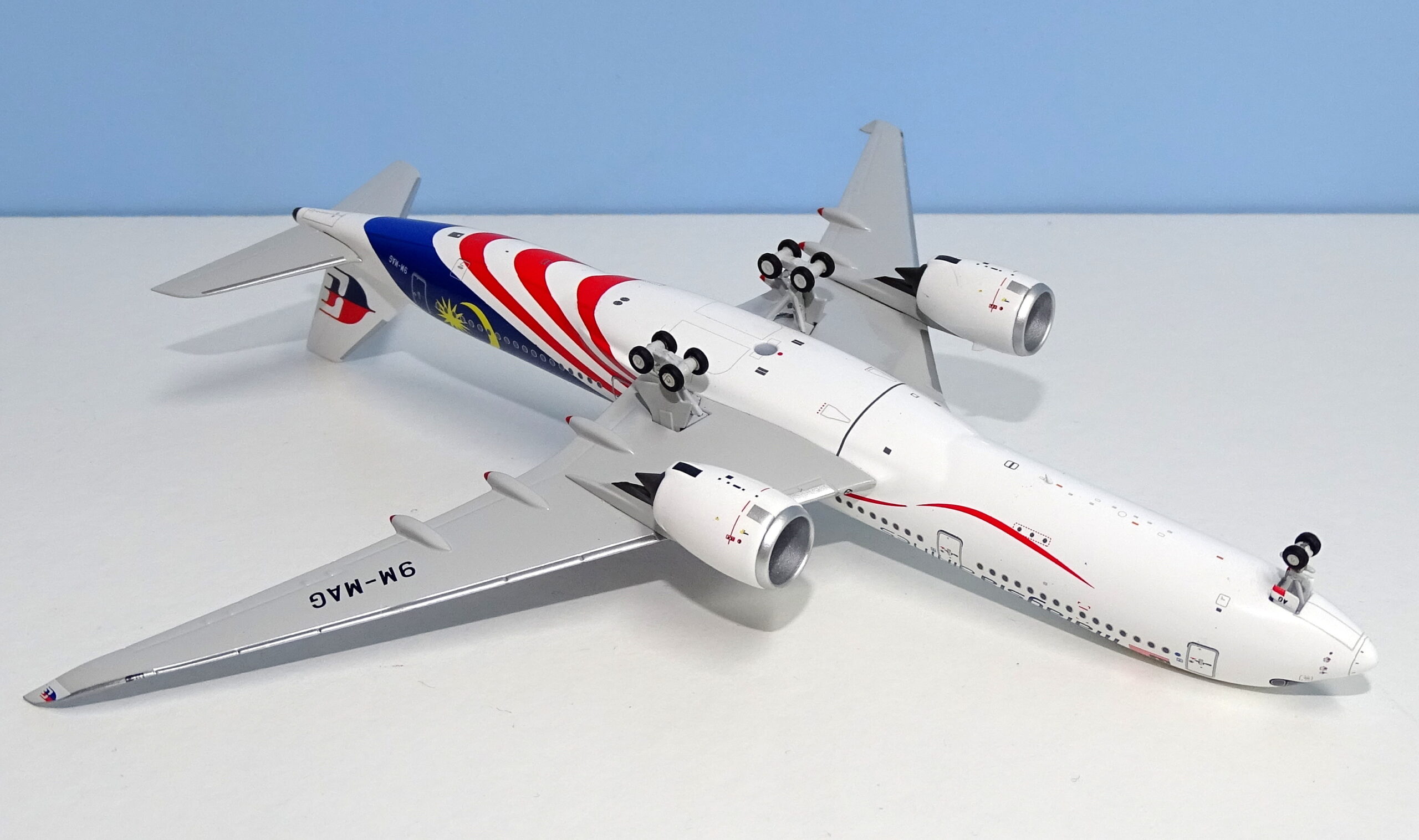 I regularly wax lyrical about the precision and quality of the printing accomplished by NG Models. This model is no exception to that and as always, the effort put into the belly is a clear indicator of a model’s quality. On the underside of the fuselage I count over 40 bits of print detail while the underside of each engine nacelle has about 18 print components. Printing on the wings is nice as well, especially the red tips to the flap track fairings.

Arguably the cockpit printing isn’t 100% accurate but it is close and certainly better than JC Wings and Phoenix manage, if not Aviation400. Unfortunately there are couple of paint colour issues that aren’t livery related. Firstly the wingtops are too dark. A350s wings are always a light grey and I think NG have the colour wrong here. Also the last stage exhaust of A350s is metallic blue – a detail that NG have forgotten. Looking at photos the blue tinge is visible. Hopefully both of these are things that NG will fix in upcoming versions. 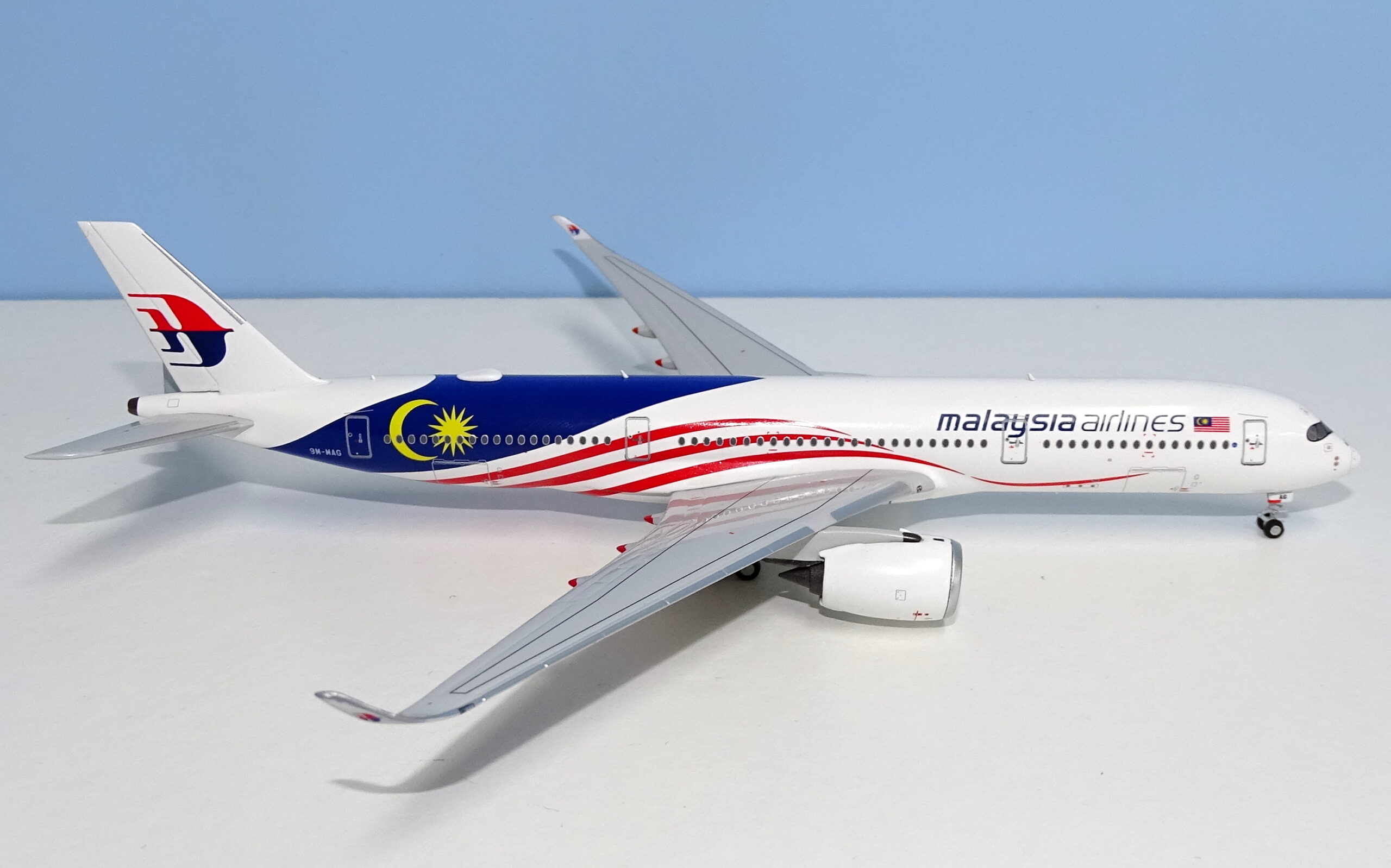 Build quality is commendable and there are no major concerns here. Getting out the magnifying glass there is some untidiness to the forward tyre hub pair on the left side maingear.

This is obviously a fantastic new mould and a very nice application of an attractive livery. Is the new mould good enough that I will think about replacing the Aviation400 A350s I own? No, it isn’t, but it is easily good enough that I’ll snap up releases when they fit my collection criteria and I will consider replacing JC Wings / Gemini Jets and Phoenix A350s with it. That doesn’t mean I won’t be buying the AV400 version anymore and it is a testament to both manufacturers that they are raising the bar for A350s in 400 scale to a level where they are unlikely ever to be surpassed.

Creating your own Custom Decals

If you’re interested in building custom models, you can take the fun a couple of steps further by creating your own decals. Here’s a brief tutorial on how to do so.

Propliners are awesome. Their models may not sell like 787s but they are a window into a more civilized time in aviation. Only Aeroclassics nowadays makes classic piston-props, which is a damn shame. At least […]

There are some aircraft that really stand-out as obvious sellers in 1:400, which just don’t seem to get made. Many of these are MD-80s, and I have previously bemoaned the fact that the existing mould […]