Aeroclassics have made lots of DC-10s but until October 2016 they had not crafted a series 40 version. Since then they have been dribbling out almost all the viable DC-10-40s but had been keeping their powder dry as regards Northwest examples. That all changed in July with the release of 3 versions of the classic thermometer liveried DC-10. After such a long wait is it a worthy addition to your collection?

Aside from Pan American and TWA Northwest Orient was the only other US trunk airline with enough of an international network to justify large numbers of long range widebodies. Braniff had an extensive Latin American network, but it was well served by DC-8-62s especially in the hot and high conditions encountered at several of its South American stops. Orient had been a long time Douglas customer until the 1960s, having operated DC-3s, DC-4s, DC-6s, DC-7Cs and DC-8s. Its experience with the Eights wasn’t satisfactory and Douglas lost out to Boeing throughout the 1960s as Northwest acquired substantial fleets of 707s, 720s and 727s.

Northwest bought both the 747 and the DC-10 but they weren’t interested in the General Electric powered DC-10-30 long-range variant that would eventually form the majority of orders. Their CEO Donald Nyrop famously said at the time:

So to keep Northwest, and Japan Air Lines, happy McDonnell Douglas designed and built a new variant to be called the DC-10-20. This was to be equipped with the JT9D-15 turbofan but otherwise matched the GE powered DC-10-30. In the end the engines were JT9D-20s and the variant name was changed at Northwest’s request to the DC-10-40 so it would seem like a newer variant than the series 30, and Northwest could boast about it. McDonnell Douglas certainly went the extra mile to keep the customer happy!

Northwest Orient began DC-10 operations in late 1972 with the first of 22 series 40s (20 more were built for JAL). The main external difference between the DC-10-30 and 40 is the engines and shape of the centre engine intake. The series 40 has a slight bulge at the front of the middle #2 engine intake. The majority of Northwest’s series 40s remained in service into the new millennium and perversely the DC-10 fleet actually peaked in number in 2001 as Northwest had acquired 24 DC-10-30s and still operated 21 of its series 40s. The last DC-10-40s were retired in late 2002 but the DC-10-30s soldiered on until January 2007. This aircraft, N150US, was delivered on July 31, 1973 and served until retirement on September 5, 2001.

The Aeroclassics DC-10 mould is one of their finest mouldings and arguably the best DC-10 ever produced in 1/400 scale. Only Dragon Wings / Jet-X had attempted an accurate DC-10-40 until this new Aeroclassics mould was made. Now in general most people are quite happy with the Dragon DC-10 (I own several myself including series 40s) but realistically it can’t compete with the AC DC-10.

Moving to the all important vertical stabilizer and the characteristic shape of the central engine is present, with a well defined bulge at the intake. If the Aeroclassics DC-10 does have a failing it is the tubelike shape of the tail mounted engine, which isn’t as curvy as it ought to be. It isn’t really very noticeable especially when it’s all a single dark colour as it is here. Moving to the exhaust for the no 2 engine and it is clear Aeroclassics have not made as much effort to get it correct as they ought to have.

Most 1/400 DC-10 moulds have a couple of exhaust variants to enable them to pretend to be either DC-10-10s or DC-10-30s however there were actually 6 different DC-10 exhaust configurations, which means that the manufacturers generally try to create generic exhausts that can pass as any of a few variants. Here although Aeroclassics have worked on the front of the engine the exhaust looks little like a DC-10-40 with JT9D-20s. The actual exhaust is fine but the fin attachment above it is too long and attaches at the wrong place. It’s not a deal breaker but it most closely resembles a late model DC-10-30.

Overall this is a great mould, but I’m knocking off 2 points for issues with the no 2 engine.

Northwest had the easily recognizable all red tail for over 60 years but it has to be said that the 1969 introduced ‘thermometer’ livery was not the most attractive version of their livery. Nonetheless it did have a rather rugged and powerful look to it with the natural metal roof and belly with white centre section and very dark blue cheatline.

Aeroclassics have a regular colour shade issue on their models, but at least they are consistent. I have loads of Northwest ‘thermometer’ Aeroclassics models and they all have the same shade of dark red, unfortunately it is the wrong shade of dark red. The tails shouldn’t really be dark red at all but instead a more medium red. Even in bad light the tails on the real thing look a lot brighter than the Aeroclassics version. I knew this before I bought the model and it does match with the rest of my fleet so it isn’t a major issue for me, but it is something to be aware of.

Placement of other livery elements and the font of the titles (for once!) are all accurate, although I have to add that the sister release to this of N143US with extra DC-10 titles has incredibly inaccurate titling of the extra DC-10 bit. The size of the black radome is perhaps a little too small but it is minor.

Printing on the model is excellent. It is very detailed and of a high spec. Highlights include the small McDonnell Douglas title and logo by the forward passenger doors and some light grey paneling ahead of the wing. The tail is lacking some detail – probably due to the darkness of the paint and the thickness of its application, as are the underwing engines. The wings are particularly nicely detailed and crafted. The fanblades on the engines are disappointingly very silver. 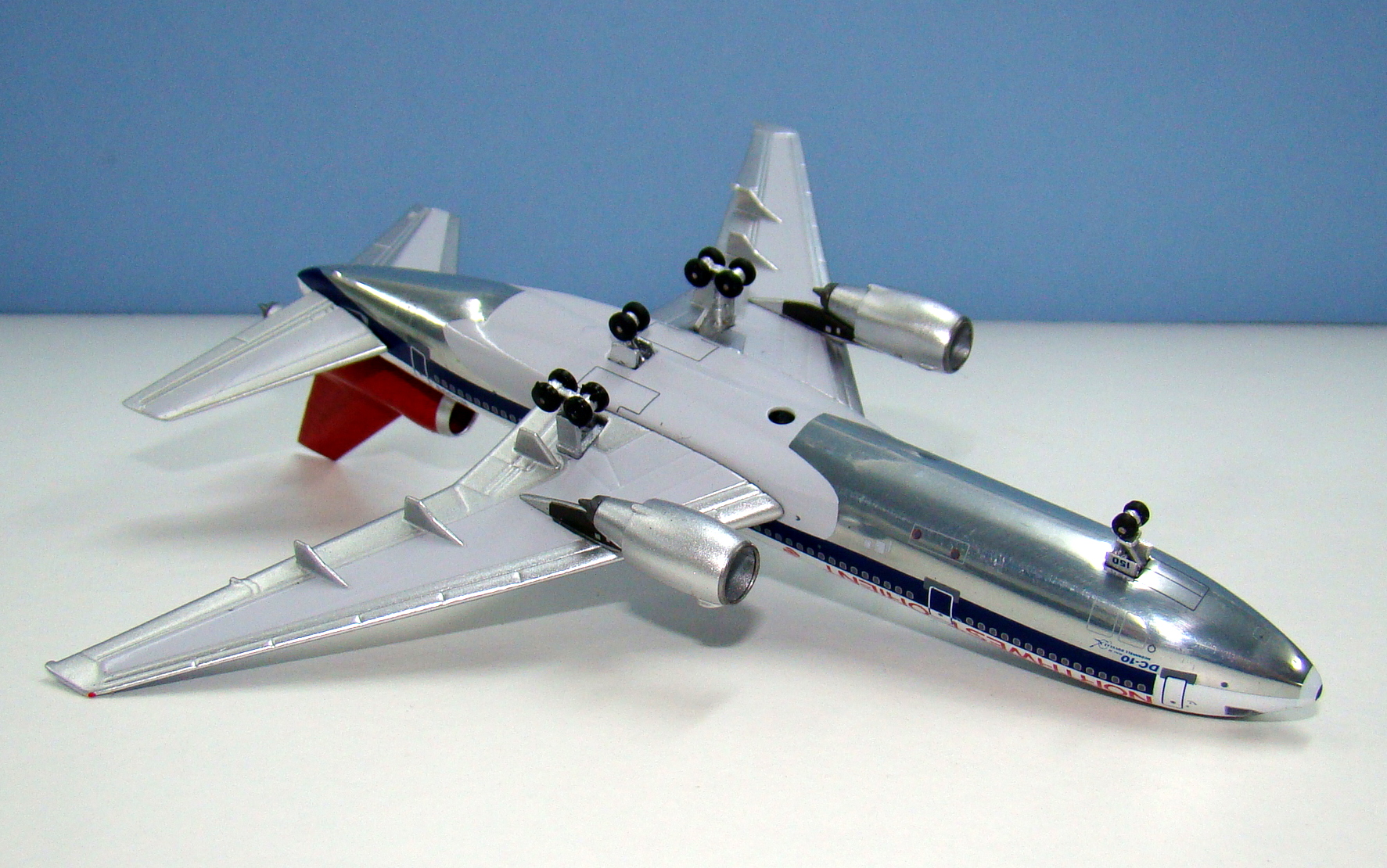 Construction of the model is tiptop with no problems whatsoever.

This is a fine model, however Aeroclassics seem unwilling or unable to fix fundamental issues like the darkness of their colours. Perhaps given all the Northwest releases it is simply too late to change to a more accurate shade of red? The new DC-10-40 is a success where it matters most, but if you are going to make a new tail moulding why not make it correct? Even so these issues don’t affect my overall enjoyment of the model and it fits well into my large Northwest fleet.

An Interview with Percy Spee from No Point Airport

His son’s toy collection and an X-Plane flight simulator game helped spark Percy Spee’s passion for aviation. Little did he know, this passion would lead him to another endeavor in 2011-the creation of airport diorama products. […]

Again, I find myself reviewing an American Airlines jumbo, yet this time it has changed to the 747SP, the smallest aircraft in the Boeing 747 family. Join me as I take a look at Inflight200’s […]