Manufacturer house colours have become a fertile ground for new models in recent years, mainly for Aviation400, JC Wings, Panda Models and Phoenix. Of these only JC and Phoenix have the variety of moulds, or willingness to make the variety, to create models for a wide range of the new aircraft variants entering production. JC Wings has in recent years really become a first rank manufacturer and although their models often take a long time to appear their newer production moulds are usually topnotch.

The A330neo has had a rather tortured development history. Way back towards the beginning of the century, when Boeing was developing its 787 programme and Airbus was itself mired in the A380 development, Airbus pitched an A350, which was effectively a warmed over A330. At the time nobody was really interested in it and the eventual result was that Airbus was, somewhat reluctantly, forced into the all new A350 XWB that has become the A350-900 and A350-1000 of today.

Although an excellent aircraft the current A350 is larger than the 787 and aimed at long haul markets. Meanwhile the A330 has outdone itself and continued to sell well, even when up against the 787. On shorter routes the A330 has shown it can still compete. Ten years after the ill-fated original A350 some airlines, notably Delta, began to see that an upgraded A330 was not only viable but preferential, over ordering 787s or A350s designed for longer routes than they were needed for.

The result was that on July 14, 2014 Airbus launched the A330neo at the Farnborough airshow. The aircraft offers 95% commonality with the A330ceo, but as well as the new Rolls-Royce Trent 7000 engines also has new extended A350 style winglets and a modified cockpit window look. Airbus advertised that, with a lower capital cost than the 787, by their numbers, the A330neo would be the most cost-efficient medium range widebody aircraft. Boeing obviously disagreed! Although the 787 is marginally more efficient it is also $30 million cheaper at list price.

Despite Boeing having no directly competing aircraft in the segment (due to the end of 767 production) Airbus hasn’t had it all their own way. The smaller A330-800 has suffered from the same lack of sales that have in recent years impacted the A330-200, with the original launch customer, Hawaiian, switching to Boeing after some aggressive sales work.

Sales of the shorter series 800 remain miniscule (just 10 units), whilst the 900 has fared substantially better, with 238 orders by June 2019. Nonetheless, although the A330 has technically outsold the 787 the order book shows that blue-chip airlines usually prefer the Boeing product. The current fleet of A330s is still relatively young, especially with the Chinese majors, so it will be interesting to see how the competition shakes out in the coming years, between the A330neo and 787, as airlines look for replacements.

The A330-900 prototype, cn 1795 registered F-WTTN, first flew on October 19, 2017 and was joined by two sisterships to implement the 1,100-hour flight test programme. Flight testing appears to have gone smoothly and first delivery to launch customer TAP Air Portugal was achieved on November 26, 2018. Considering the limited development costs, Airbus has got a quality aircraft at a fraction of the costs of the 787 programme and with over twenty aircraft now in service it is already proving its worth.

I have been critical of the JC Wings A330 moulding in the past but a quick look at this A330-900 shows that although the real thing shares the fuselage of the A330-300 this 1:400 example does not share the fuselage of the 1:400 A330-300 moulding. This is a good move by JC Wings as although their A330 was ok it had some issues. Two of these have been resolved well on this new casting. The nosecone is pointier and the nosegear position has been moved slightly forward to its correct location.

The rest of the fuselage is very good, as it was on the original A330-300 mould. The neo’s underside looks simplified compared to the ceo and on the new mould JC Wings have decided to print on the scoops and inlets rather than have them in relief as on the older mould. It doesn’t impact the mould’s quality. The wing join and complex fairing are excellent and the mould doesn’t have any of the issues that JC A330s have had with odd wing angles.

Of course, with a neo, as with the A320neo, it is the engines that are the biggest change since the new Trents are huge. The new engine mould and pylons are excellently shaped and fitted. The engines have plenty of ground clearance, which is helped by JC having increased the height of the landing gear (another peeve I had with their ceo A330 mould, which they’ve resolved). The engine fans are well detailed and revolve. It is a rather useless feature but competes well against Phoenix who first had the idea.

The model has all four aerials (3 up top and one below) and the small dome forward ahead of the wing. All are sized and fitted well. The last point to discuss is the complex curving winglet design, which I think JC has carried off well.

Overall this A330-941N is a major improvement over the JC Wings A330-300 and another example of how JC Wings are willing to try to improve their moulds, which is in contrast to Phoenix who look like they have basically just updated their A330ceo mould to make a neo. 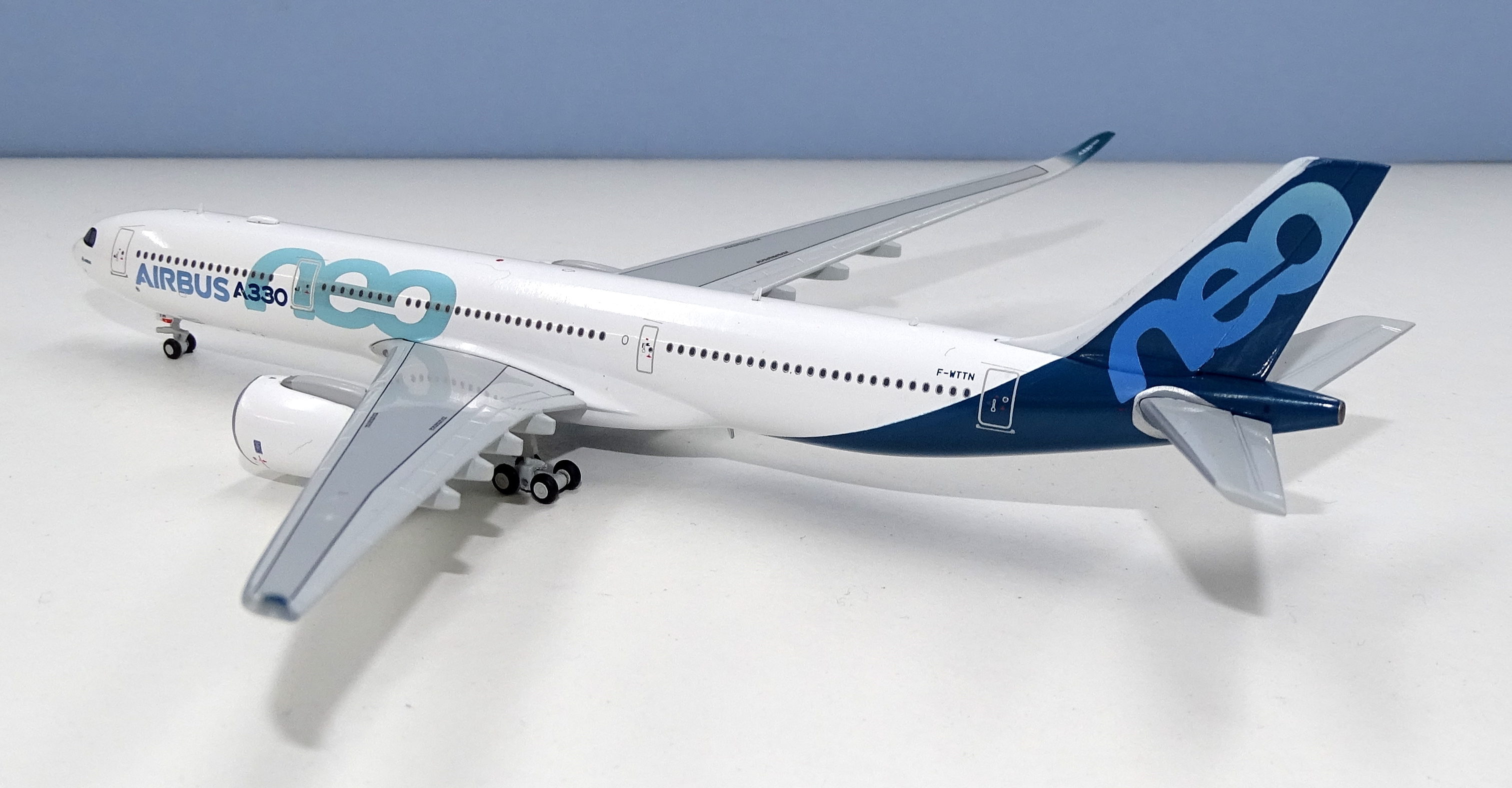 The Airbus house colours are not exactly complicated, but they are modern and clean. They should be a doddle to get right and yet the main reason I didn’t buy the Phoenix version of this aircraft was because they had seemingly got both the blue’s incorrect. 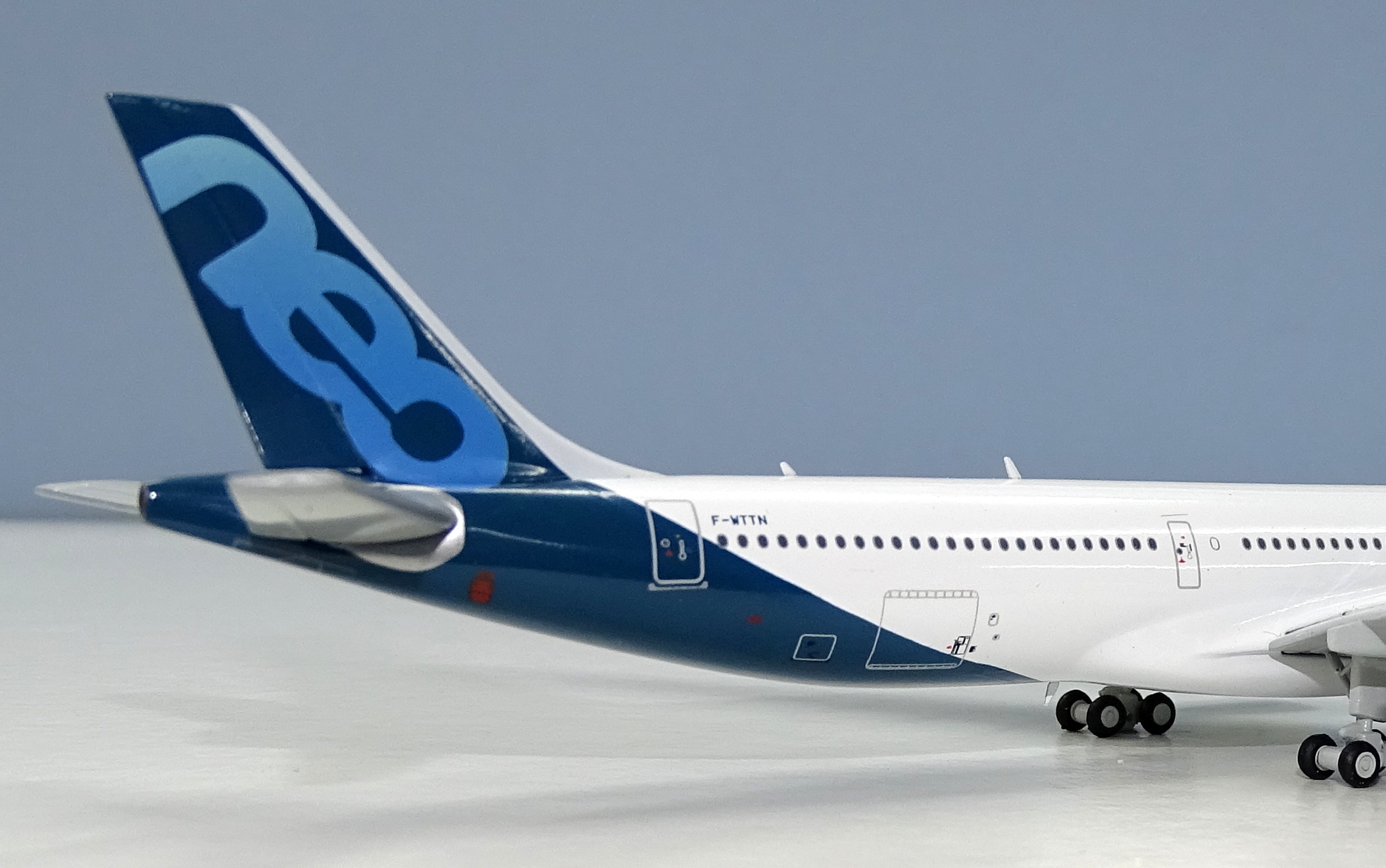 In fairness in different photos they do seem to change but I do think JC Wings has made a better effort. In essence I think Phoenix got the colours too light and arguably JC Wings has got them too dark (this is in fact a common occurrence for both manufacturers). In actuality technically the two models show different schemes anyway as the Phoenix one has A330-900 titles and the AIRSPACE titles aft, while the JC Wings one has A330 titles and a blank rear fuselage. JC Wings do nicely show the gradation of the neo titles on the tail, which get lighter towards the top of the fin.

I can have no qualms about the application of the livery elements. They are perfectly placed and printed. Particularly fine are the A330neo titles on both sides of the winglets and the small AIRBUS titles and logo under the cockpit.

Printing of JC Wings models is, in my opinion, more detailed than that of Phoenix and on par with that of Panda and NG Models. Certainly, here the printing is strong, however a few omissions and mistakes have been made.

The underside shows both the good and the bad. There is plenty of detailing but oddly the maingear doors are missing. Also missing are the thrust reverser panel lines on the engine nacelles and the strong painted outline around the body/wing fairing forward. This latter point is something regularly missed off Airbus moulds, perhaps because the manufacturers don’t want collectors to think they are using a cradle mould?

Printing of the cockpit mask is nicely done but there is the hint of a small smudge just forward of it on the left side of the nosecone. Another minor printing error has slipped in at the wingroot with the landing lights printed on the wing leading edge rather than the fuselage fairing. On the plus side printing of the last two letters of the rego on the nosegear doors, the RR logo on the engine nacelles and the engine undersides in general are excellent.

A minor complaint regarding the engine exhausts is that they are too silvery and not dark enough. Build quality for the model is sound except that the pin that holds the maingear truck onto the gear leg is missing on the portside. The gear truck actually still sits on the gear leg without it, but the truck doesn’t stay in position correctly and is likely to fall off when I least expect it.

This is an excellent model and I am very happy with it, however a series of small errors, mainly of the rivet counter variety, do impact the score it receives. That is not a reflection of the excellent new moulding that JC Wings have produced and this A330neo is a worthy addition to a stable that already contains top class 737 MAXs, 777s and 787s.