Phoenix has built its reputation on the Boeing 777 more than any other type, for which it has for many years had the best moulds available. Aeroméxico, although a major flag carrier, doesn’t strike me as the sort of airline Phoenix usually produces but in recent years they have expanded into Asia and perhaps this has piqued Phoenix’s interest. Certainly the 777 has always looked good in their liveries and it was the type that opened up Asia for direct service from Mexico.

Aerovías de México, S.A. de C.V. (trading as Aeroméxico) has only been in service for 27 years and during the majority of that time it has struggled due to heavy competition, mismanagement, weakness in the Mexican economy and other external factors like the after effects of September 11. Nonetheless since its sale in October 2007, and the failure of Mexicana three years later, it has transformed itself into a successful flag carrier for Mexico. This has been assisted in part by a strong relationship with its Skyteam partner Delta, which has recently led to a joint venture between the two on crossborder flights.

Aeroméxico has also significantly expanded its international network from 2006 onwards when it acquired a pair of new Boeing 777-2Q8ERs on lease from ILFC, which were later joined by a further pair leased from the same source but ex-VARIG. N776AM was the last to arrive in September 2007 having originally been delivered to VARIG new as PP-VRB ‘Ruben Berta’ in November 2001. The 777s allowed Aeroméxico to start services to Tokyo and Shanghai and become only the third airline in Latin America to regularly have flown to Asia.

With Mexico City as its hub it was not too surprising that in July 2014 the airline signed an agreement with the head of the government of Mexico City to become a brand ambassador for the city. This was achieved by painting some aircraft in the fleet with the CDMX logo that is representative of the capital. Onboard the aircraft wearing the scheme special tourist videos were played for passengers. At least three aircraft wore versions of the CDMX scheme but none of them appear to still be present in this livery and in fact two of the three are no longer in the Aeroméxico fleet.

Aeroméxico’s Boeing 777s have begun to be replaced by new 787-9s, which are enabling expansion of trans-pacific services to destinations such as Seoul. Of the four original 777s three remain in service, however N776AM has left the fleet and now serves as OE-LPF with Austrian Airlines since April 2017.

The Phoenix 777 moulds have excellent reputations and have forced competitive responses from JC Wings / Gemini Jets at least twice because they are so good, or at least that’s been the common feeling. Do I agree? Well who am I to swim against the tide? The mould doesn’t have the reputation for nothing, it is sublime – one of the best moulds ever made in this scale I’d say.

The fuselage and vertical stabilizer are near perfect as are the wings (slot ins not a cradle) and horizontal stabs. The mould has been updated with aerials and satnav domes and they also look good. All four aerials are present whilst the small bump just after the wing is in good relief. There is actually a fifth aerial on the real thing (on the rear underside) but it is so small I doubt it could be modeled in 1:400 scale.

About the only criticism I can put the mould’s way is that the engine pylons aren’t deep enough under the wings. Perhaps the engines are a little small also but if so these are minor points and at least avoid that perennial issue with so many 1:400 moulds where the engines are far too close to the ground.

One of the nicest features about the mould is the undercarriage. Phoenix usually have great gear legs and wheel hubs but on the 777 maingear it also has the nice feature that the triple wheel bogey can be moved up and down to simulate take-off and landing attitudes.

Following Aeroméxico’s change of ownership in 2007 the airline shed its bare metal livery in favour of a mainly white scheme that although attractive is a little bland. Of course one of the reasons for this was the inability of the then on order 787-8s to wear bare-metal schemes since they are only partly metallic. Nonetheless it has taken the airline more than a decade to switch their entire fleet over to the new scheme.

As special liveries go nowadays the CDMX scheme is a relatively simple addition to the white base current livery. The CDMX special livery that was worn by the 737 XA-AGM and the 777 N774AM was a block rose pink area at the rear of the fuselage with CDMX titles, however the scheme worn by N776AM, between July 2015 and circa June 2016, although the same shape was more complicated. Whereas the other pair of aircraft had a block of rose pink N776AM’s scheme introduced various prisms of colour in two shades of pink as well as orange. It works quite well to fill an area of white where not a lot was happening and doesn’t impact any of the usual elements of the standard livery.

The standard livery of Aeroméxico is actually reasonably simple, however if there’s one thing that doing these reviews has taught me it is that that won’t necessarily stop the manufacturers from making a mess of a scheme.

Phoenix have done a good job on the colours of the standard scheme. The dark blue of the titles, engines and tail is fine as is the lighter blue and red. Likewise the colours of the CDMX logo are fine too, my only complaint being that the CDMX lettering itself and especially the small CIUDAD DE MEXICO titles below are a little dull and not bright enough. Another minor point is that the edge of the special decal area should be smooth but especially on the starboard side of the model you can see the triangle elements don’t always form a smooth boundary. It is minor and only shows up on macro photography.

Placement wise the livery is near perfect. The tail is superb and effectively perfect whilst other elements are exactly correct or only out by a tiny fraction (the reg is slightly too low and the red swoosh out by less than a window width). This livery is in fact near perfect all over and an excellent rendition. Well done Phoenix. 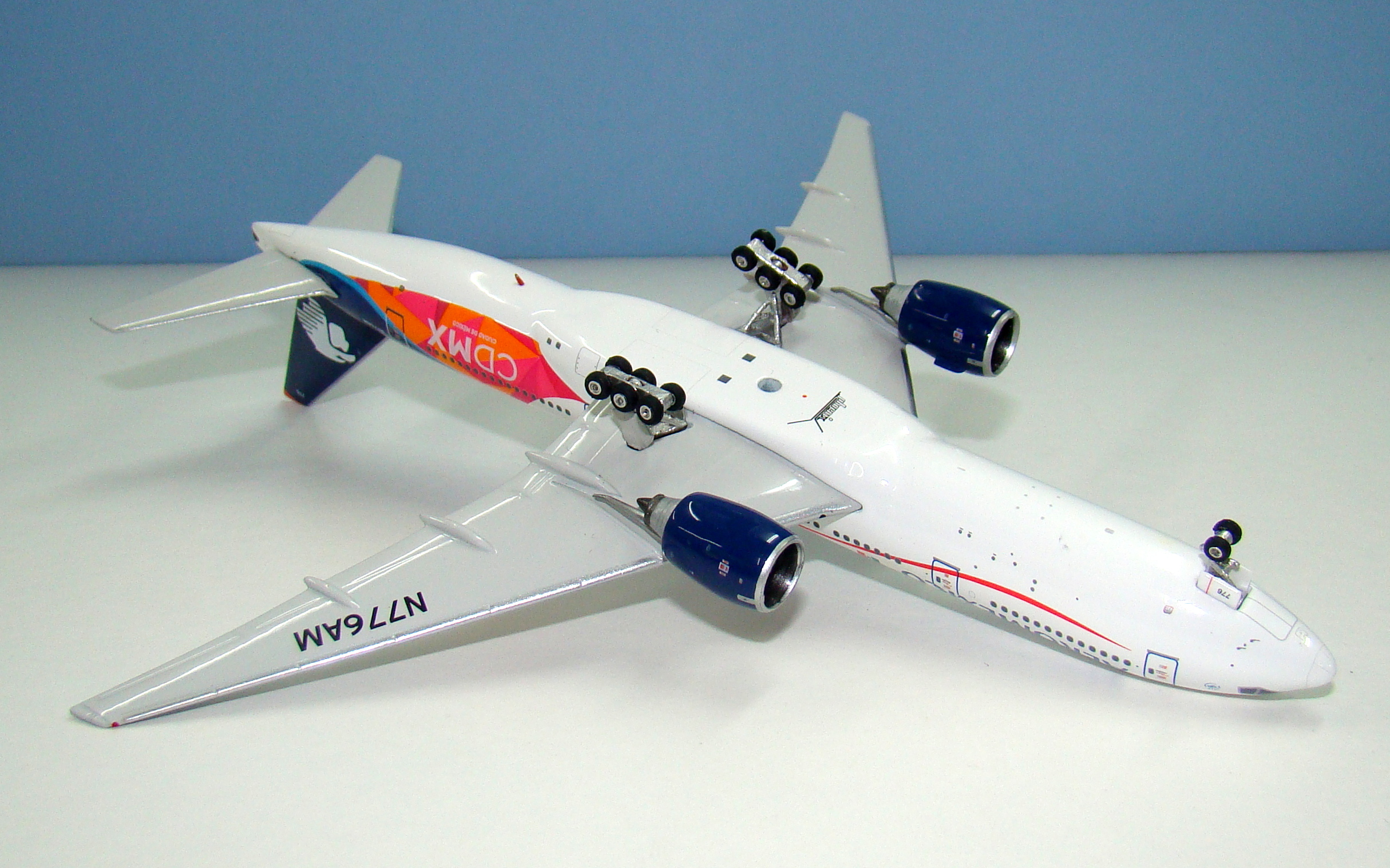 Printing on this model is of the sort of quality level you expect from modern 1/400 models i.e. it is excellent. What I particularly like is that the printing goes to the level of including all the little circles and marks – look for example at the area just ahead of the tail figure’s nose. Phoenix can be a bit weak on printing on the underside of their models but here the detail is decent. If there is one printing area I am not totally happy with it is the cockpit windows. I’ve noticed that recently Phoenix have been printing these a bit too large. From the front you can see they are also not completely level with the starboard side marginally higher than the port. On this model it isn’t a major problem but some 777s I’ve seen don’t look as good.

Paintwise I think it is well applied but perhaps a little thick on the wings obscuring slightly some of the texture and details of the flaps. The model does a great job with the engines though, which have proper dark cowling inners and fan blades plus nice dark exhausts.

In terms of quality however Phoenix hit it out of the park. I can’t find any blemishes or issues with the aircraft. The parts are fitted well, the gear looks good and there are no artefacts from the construction process. There is a tiny amount of a tab on one nosegear tyre but it is very small.

I am thrilled with the quality of this model. I didn’t really expect Phoenix to be able to produce such a strong piece, but it shows that with their best mould they are still very very strong. It’ll be interesting to see how JC Wings’ new 777 matches up to this but if Phoenix keep this sort of quality up they have little to fear, with the triple 7 at least. The score is the joint highest I’ve given yet and it’s an awesome model.

Phoenix Models has announced its new releases for June 2017. The manufacturer will debut a 1:400 scale Air Canada A321 featuring the carriers new livery. Other special liveries include a pair of 1:200 scale Finnair […]

It is no coincidence that both Phoenix and JC Wings (the latter under the guise of BBOX) have recently produced examples of this aircraft given it was relatively recently retired with some fanfare, however it […]