I have a real interest in Chinese aviation and Chinese airliners, partly because they are so well covered in 1:400 scale since all the manufacturers are China based (aside from Gemini). Kunming Airlines are something of an exception to that rule though as there have been only 3 releases for the airline in 1:400 scale so far, two of which I’ve been waiting for, for a long time, and have only just arrived from JC Wings. Given that NG Models have recently started using their own 737-800 mould more regularly it seems like a sensible time to revisit the JC offering and see how it stacks up.

Kunming Airlines is, as its name suggests, based in the capital city of Yunnan province, Kunming. It is a city of nearly 7 million people in Southern China and its 2012 opened Kunming Changshui International Airport is the 6th busiest in China, and within the top 50 worldwide. Accordingly, it is a hub for several airlines including China Eastern, Lucky Air, Sichuan Airlines, Ruili Airlines and Kunming Airlines.

Kunming Airlines is 80% owned by Shenzhen Airlines, itself a subsidiary of Air China, and so Kunming Airlines finds itself firmly within the Air China grouping. Of the four major groupings in China only China Southern is not well represented at Kunming International. The airline is quite young having only started operations in 2009 after a long gestation that began in 2005.

Interestingly although Kunming Airlines has grown it is nowhere near its strategic plan’s goals that were stated at startup. Far from the 150-200 aircraft it wanted to operate between 2015-2022 the current fleet stands at only 27 – a mix of Boeing 737-700s and 800s. It is hard to say what the main reason for this is, but strong competition and capacity restrictions at its homebase are likely factors, as is the choice of strengthening the Air China group’s hold at relatively nearby Shenzhen over Kunming.

Several of the Kunming fleet wear special colour schemes and all three 1:400 releases wear one, meaning that oddly there has been no release in the standard Kunming Airlines scheme. B-1507, a 2015 build 737-800, wears a livery named Dian Lake. This lake is a huge 298 square kilometer body of water that borders Kunming. Unfortunately, it has become a symbol of China’s growth issues. The lake is horribly polluted with its water rated at the lowest grade making it unfit for even industrial use. Over 55% of the lake’s fish population is thought to have been killed by the pollution and several endemic species have gone extinct.

Considering the lake’s state, I’m not sure what Kunming Airlines is trying to say with this livery, and can’t find any press releases or such. Obviously, it’s clear that the idyllic scenes on the livery represent a purely aspirational view of what Dian Lake is really like! 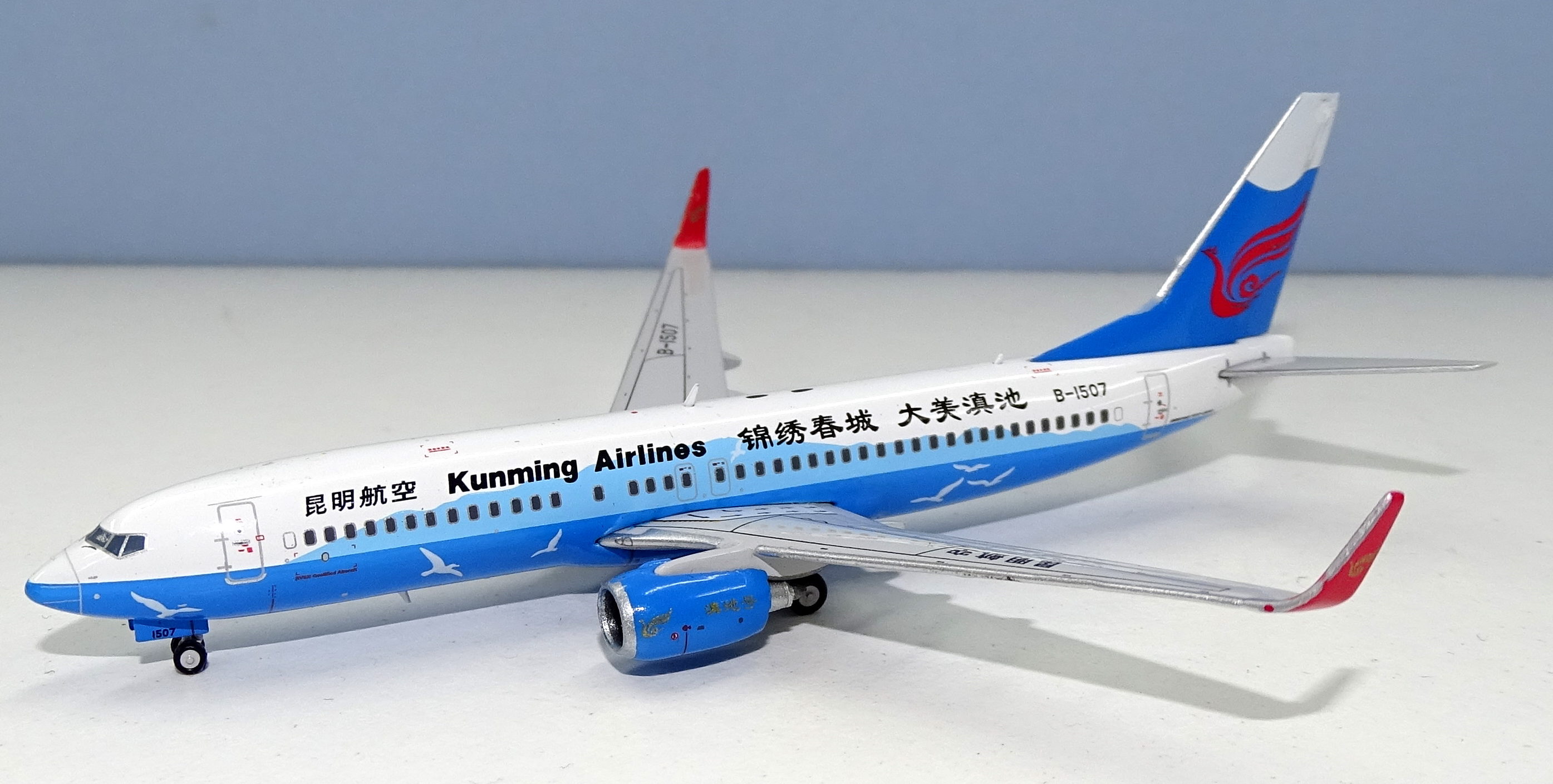 This is only the fourth JC Wings 737-800 using this mould that I own. That is due to a combination of factors including strong competition from Panda Models for Chinese 737s, JC Wings extended release times and also variability across the JC Wings mould itself. Of the three I own, one older example is awful, two more recent examples are decent and then there is this one. The issues are not strictly down to the mould itself, which is ok, but they do sometimes impact the overall look of the mould and that can be a problem.

Starting at the rear the tail end is very good. The shape of the rear fuselage, complete with tailstrike bumper, is perfect and the tail is good, although perhaps a little tall and thin. It is also made of plastic not metal. The shape of the wings is also good, but it is clear that there are issues with how they are fitted. I will discuss these in the quality area since it isn’t strictly a mould problem. The engine pylon shape is not perfect and the engines are not mounted high enough. This would be more of an issue if it weren’t for the wing angle issue.

The shape around the cockpit and nosecone is ok but not as good as on the NG Models version by some distance. The nosegear of ths mould has been criticized and the tyre is a little too large. The nosegear door is slightly the wrong shape, as its lower margin is straight rather than curving upwards, and overall it is too large also. Despite this the nosegear on this model works ok. 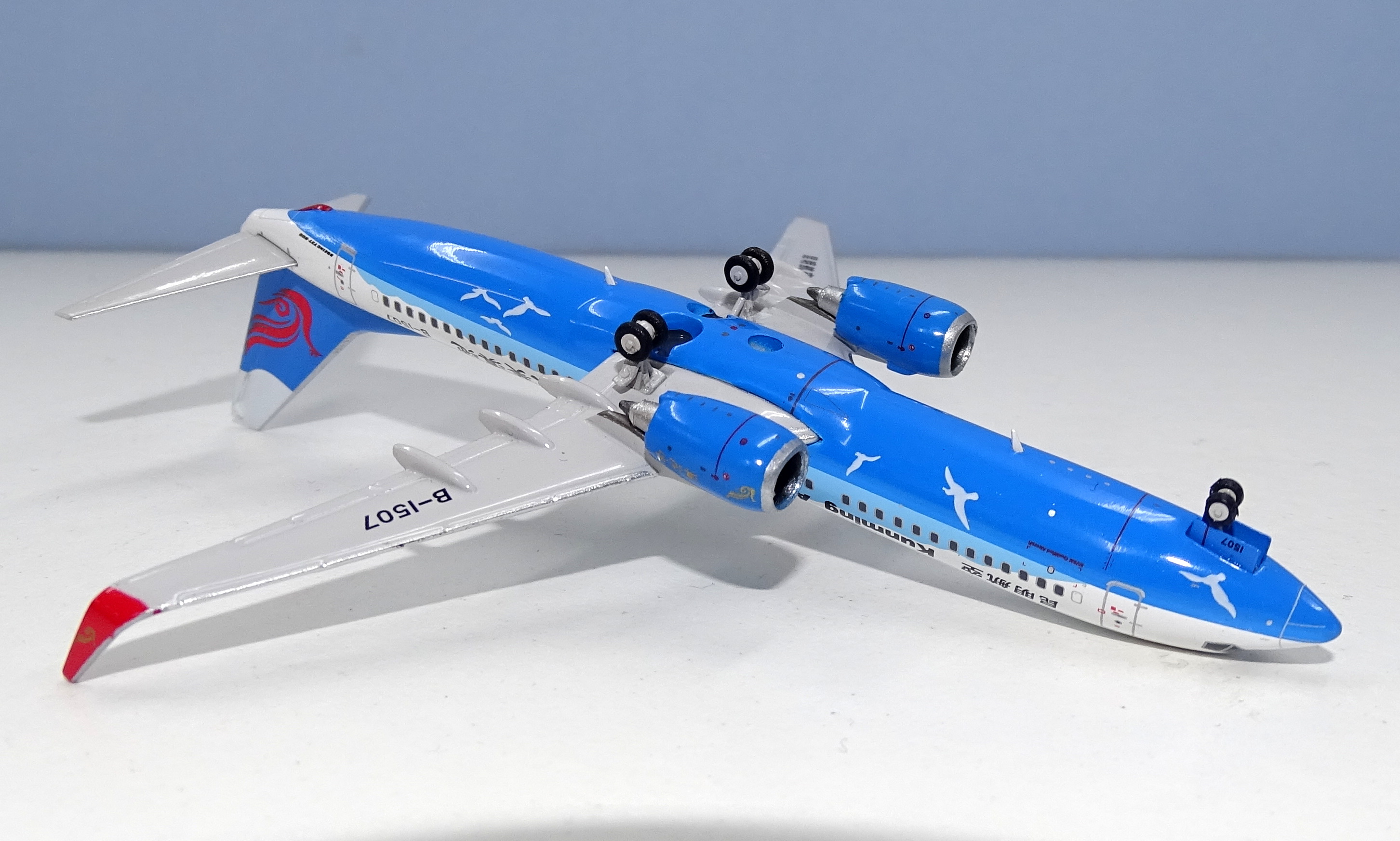 The last part of the mould to critique are the aerials. This mould has four of the five on the real thing and although shaped well they are a little too large. Personally, I have built my 737-800 fleet around the Panda Models mould (which they have just retired) and the new NG models mould provides even stronger competition. This JC Wings mould is ordinary but provides a decent backup to other 737-800 moulds if need be.

The standard Kunming Airlines livery features mainly red and gold but the only place on this 737 that it is visible is the winglets, which retain their standard scheme. The fuselage is cut in two by a blue lower half, which no doubt symbolizes the lake surface. Behind it there are light blue hills and seven white seagulls fly across the fuselage. The tail also is primarily blue, except for the tip and the standard Kunming Airlines logo, this time in red.

The placement of the livery elements is very good. The lake horizon line correctly cuts across the top of the wings and is higher than the nosecone tip. The hills and birds are also well printed and placed on the model. The titles are arguably a little too strongly printed but in the correct position.

I think the tail is perhaps printed slightly too low in terms of the upper blue margin and main logo but it isn’t enough to really make a difference. Smaller details like the golden engine logo and titles are great. 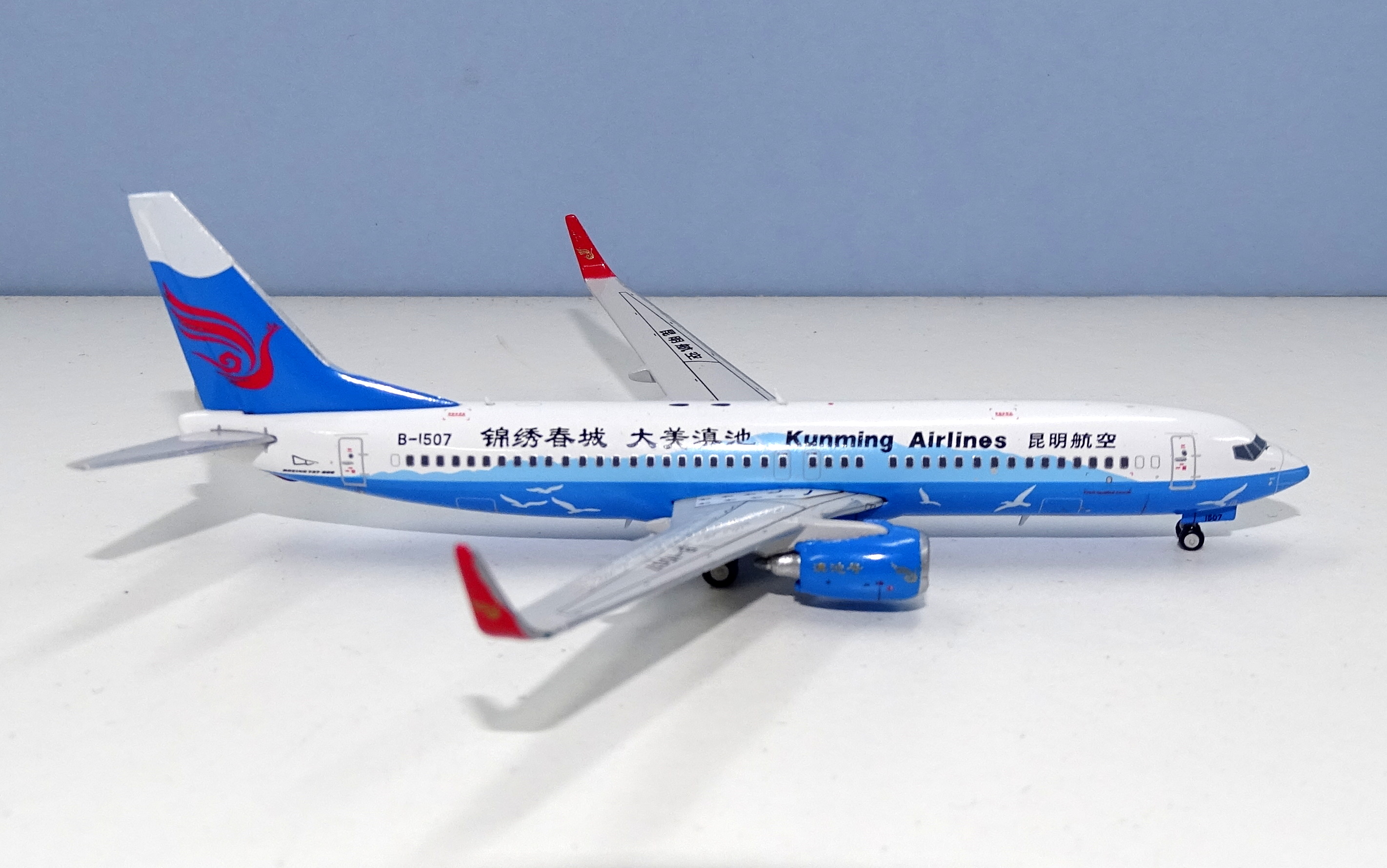 The only issue I have with the livery application is the colour. The main blue of the tail and lake is too dark (the flash used with the photos masks this here somewhat) but the other colours are fine.

In general JC Wings are good at printing and most of this model shows that well. The printing is detailed and fine with elements like the window outlines showing real quality. It is therefore a shame that JC Wings have succumbed a little to the Phoenix syndrome i.e. an inability to print the cockpit windows well. They are not quite the correct shape and are also a little lopsided, lower on the model’s starboard side. It is not anywhere near as bad as Phoenix have done before but it does noticeably impact the look of the aircraft.

Paint quality is good everywhere except for the port side of the vertical stabilizer. At the top rear edge there is a blob of white paint as if the model needed touching up.

At first glance this model looks well built but upon reflection it is clear that JC Wings has not fully solved the issues it has had for several years on and off with slot in wings moulds. The problem is that the moulds are inconsistently put together in the factory and this 737 illustrates the problem, which has variously impacted 737s, A320/21s and A330s at times.

The wings are angled upwards far too much so that the bottom of the winglets is not far off the fuselage roofline. It is especially obvious if you compare the model to one of the other JC Wings 737s I own, which have much better angled wings. Putting one of them next to this model clearly shows that the wings here are too high. The wings are very well glued in so there is no chance of altering the attachment. It is an annoying issue and one I had hoped JC had resolved.

JC Wings makes some Chinese airlines that none of the other manufacturers make – mainly for the smaller airlines like Kunming and Lucky Air, which are under-represented in 1:400. I am very happy about this; however, it does mean you not only have to contend with the often-incredible wait times but also with some of the weaker narrowbody moulds in their portfolio. Their 737-800 is ok but not great and sometimes poor due to QC, much like their A320. This means you need to be careful as with wing attachment problems and cockpit printing issues the resulting model can be very much a take it or leave it one.

The ascendancy of NG Models in 400 scale continues apace with the introduction of their new Airbus A350, a mould that has seemingly gained more excitement than their 747SP. This is despite there being multiple […]