Although now supplanted by its A330neo cousin the ceo version of the A330 family continues to be the front-line workhorse of many of the world’s major airlines and indeed has discovered an important secondary niche as a military transport. It also continues to find favour in 1:400 scale and NG models continued their onslaught against the incumbent manufacturers in June by debuting the first of their own A330s to go with their 787-9 and 737-800. At the same time Panda decided to go head to head with NG so the battle is on.

Jet2 has successfully found a niche in the ultra-competitive British market place, despite the proliferation of low-cost competition (from Ryanair and EasyJet) and the surviving charter groups (mainly TUI and Thomas Cook). This is all the more impressive due to the fact that until 2001 the airline, formerly Channel Express, didn’t even offer passenger flights and that other more well-known airlines like Monarch have failed to survive the storm of recent years.

Like Monarch was, Jet2 is something of a hybrid airline, offering a mix of scheduled and charter flights; but unlike Monarch Jet2 has focused its operations in Northern England, even styling itself as the airline of Yorkshire. The main base is at Leeds-Bradford but other major outposts include Manchester, and operations are spread as far South as Stansted and as far North as Glasgow.

Jet2’s has shown double digit growth in most years, servicing over 12 million passengers per annum by 2019 compared to only just over 6 million 5 years earlier. It is now the third largest scheduled airline in the UK. The fleet has grown accordingly but still mainly consists of second-hand aircraft. New 737-800s only began arriving in 2016 but the 800 series does nowadays form the backbone of the fleet alongside smaller numbers of 737-300s and 757s. The only widebody that has ever been operated is the A330-243 G-VYGL.

This A330 is interesting in that it is leased in seasonally from AirTanker Leasing, the winner of the Future Strategic Tanker Aircraft contract with the Royal Air Force to operate the RAF’s Voyager A330 tanker transports. This was designed to provide a core fleet of 9 A330-200s for the RAF and 5 extra aircraft that could be leased out to airlines when capacity was available to do so. In actuality it seems only 4 of the A330s have been kept on the civil register (G-VYGJ-M) and only three have actually seen service with civil airlines.

It was in May 2017 that Jet2 signed a damp lease with AirTanker for the operation of G-VYGL for the 2017 summer season, operating from Manchester to Palma, Tenerife, Rhodes and Arrecife. The damp lease arrangement meant the pilots were provided by Airtanker and the cabin crew by Jet2. The aircraft also saw service to New York (Newark) and was configured in a 327 seat all economy configuration.

The agreement was obviously a success as the same aircraft was leased again between May and November 2018 and once again for the 2019 season. G-VYGL herself was built in 2014 and although initially given the military rego ZZ341 was converted from a KC.2 Voyager in March 2016 to series 243 status. Between January and April 2018, she served a short lease to Eurowings (and also briefly subtitute with Thomas Cook) but otherwise has been exclusively with Jet2. It seems the flexibility that the damp lease provides Jet2 is beneficial to their business model and is no doubt another one of the reasons for the carrier’s unorthodox success.

It seems sensible to follow up last week’s Panda A330 review with an NG Models one since not only are they both quite new moulds but Panda also just released this exact same model in the same month as NG did. Is that a coincidence? Surely it is not, despite what Panda have said, especially when they also matched the Singapore release too. Panda don’t seem thrilled to have new A330 competition from NG.

It is difficult to surpass the Panda A330 that I reviewed last week, which got top marks for the mould. Truth be told it is very difficult to distinguish between that mould and the new NG casting, they are both so close to perfection. For that reason I have to almost repeat my remarks from last week when praising the overall shape of the airframe and control surfaces. As this is an A330-200 the vertical stabilizer is correctly slightly larger than that of the A330-300. As with the Panda version this casting also repeats the inaccurate tyre hub colours, but that is a minor point.

The one major point of difference between the Panda A330 and the NG models one is at the engines. The Panda mould has solid engine cores whilst the NG Models version has excellent and finely detailed see through engines.

The NG mould has the four main aerials and the small forward rooftop dome. All are well sized and finished. There is really almost no daylight between the Panda and NG A330s but if I had to make a call I’d go with the NG if only due to the engine detailing. In reality you’re nowadays spoilt for choice when it comes to A330 options. 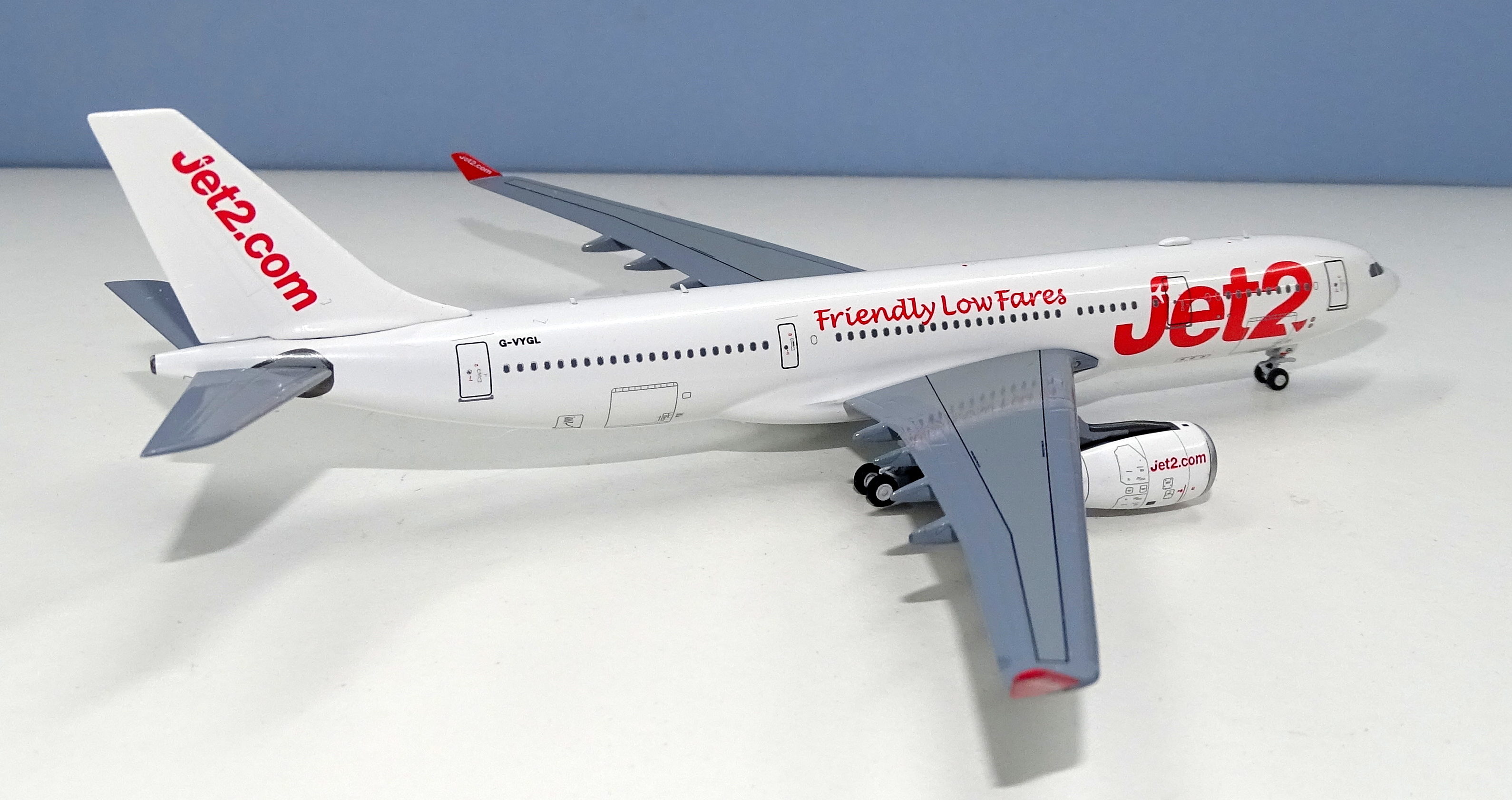 Of the AirTanker A330s leased to airlines only the Thomas Cook examples carry full colours, whilst the Jet2 and TUI examples wear abbreviated schemes with red titles and logos on a white base. The result is that the livery is dead simple and nowhere near as attractive as the standard Jet2 livery. The only positive is that there is no room for issues with the fuselage silver colour (as Phoenix had with their 737-800s) since it isn’t present. 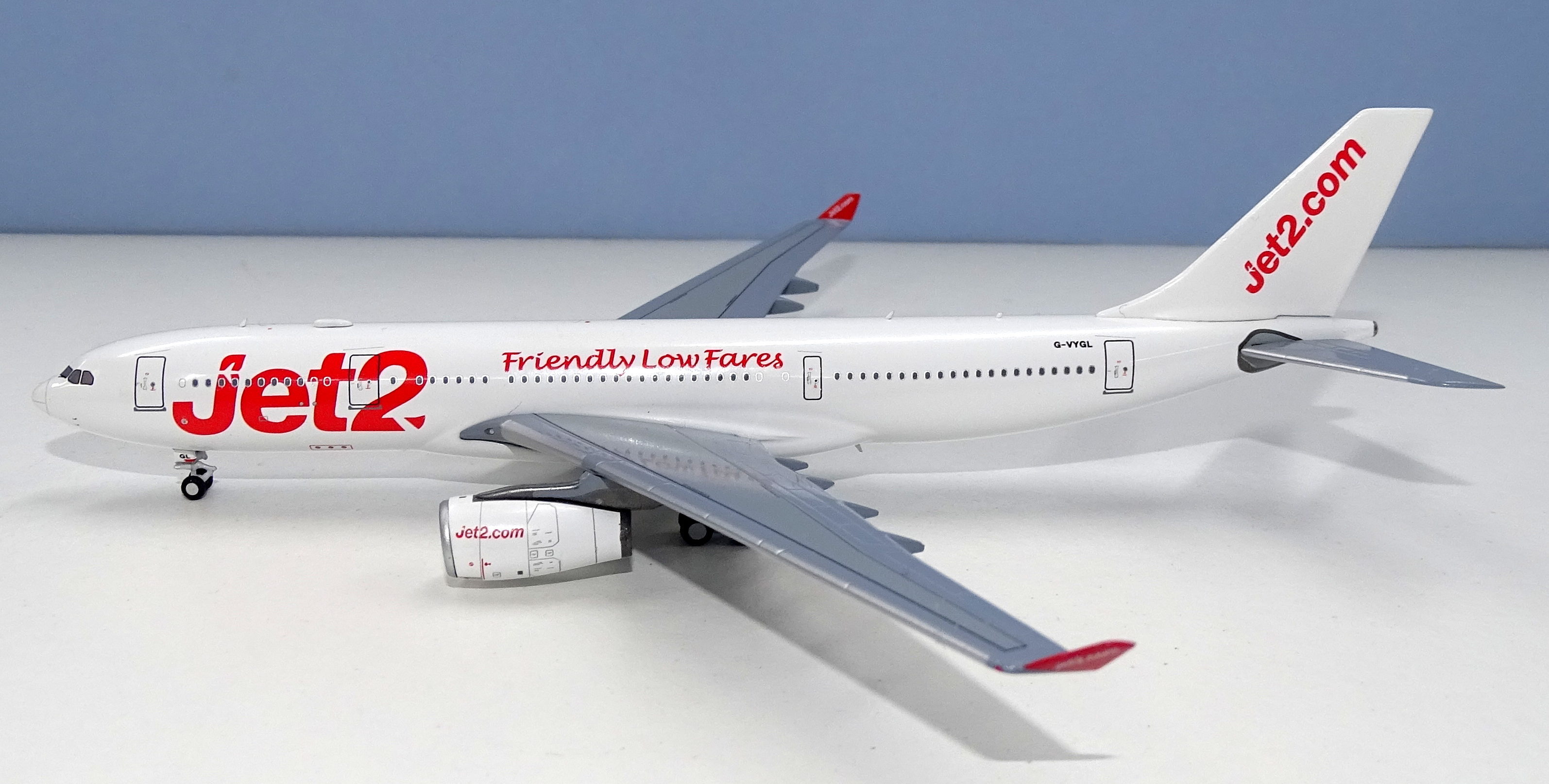 NG have shown themselves to be very capable with research and there are no issues evident with such a simple scheme. The orangey red titles colour is fine and the location and fonts on display match the real thing. Other potential pitfalls, like the high placement of the titles on the engine nacelles and the inside winglet details, are batted away with no issues. The aircraft registration is unusually finished, correctly, in yellow on the wing underside. 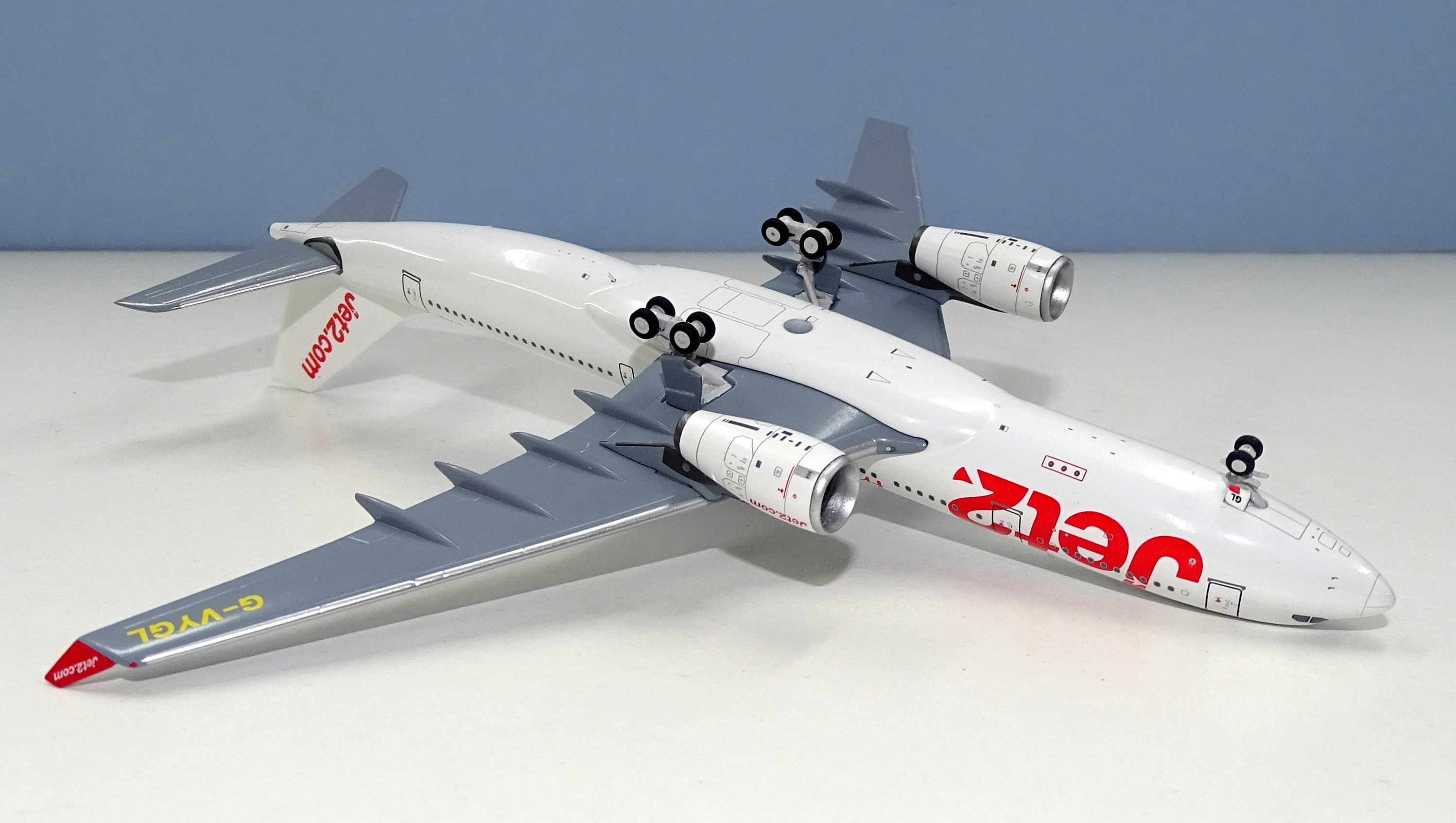 One interesting aspect of the Jet2 A330 is the unusual deep, almost uniform, grey of the upper and lower wings. This seems to be an artefact of the RAF history and is unusual for a civilian airliner. NG have the grey correct whereas the Panda version of this model looks like the grey is too light.

The detail printing of NG Models is the best in the business, even surpassing Panda and JC Wings to the extent that sometimes they might even overdo it. Unlike the Panda version of this same aircraft NG include nosecone radome lines and more panel lines on the engine nacelles. The detail is exquisite and shown up all the more by the boring livery colours. 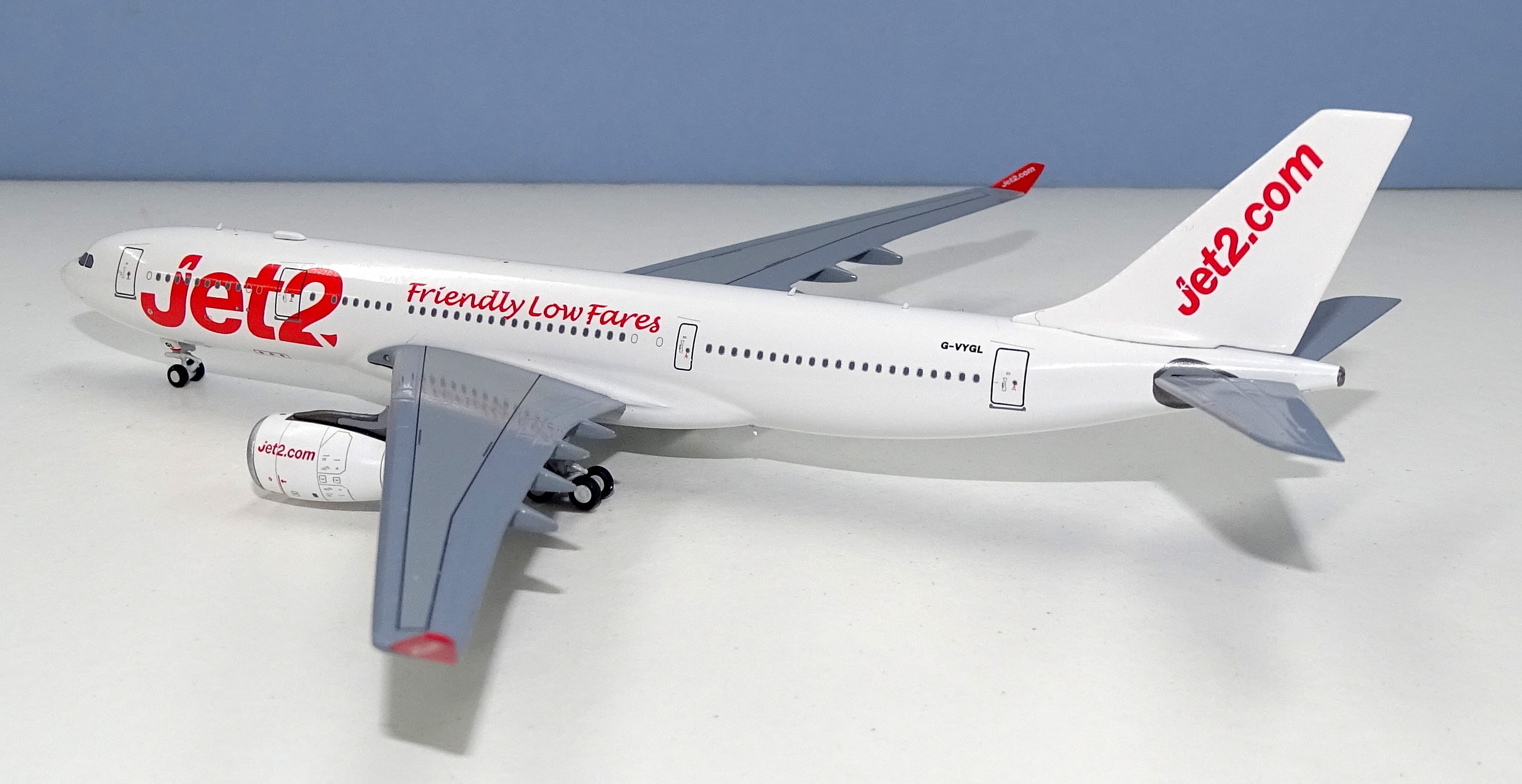 Construction is great – no issues whatsoever.

It is top marks once again to an NG Models release, albeit one I admit that has such an incredibly simple livery that a home run score is less impressive than it might be. Even so near perfection is not to be sniffed at when there are so many ordinary models floating around the market.

The returned Aviation400 has so far been a rather enigmatic presence in 1:400 scale. It has announced several models using its A330 and A340 moulds that have not appeared, whilst its A350 releases have been […]

Phoenix Models has announced their September lineup of diecast aircraft releases. The manufacturer is scheduled to release 22 new models in both 1:200 and 1:400 scales. Highlights include the TAP Portugal A330-300 “Stopover, Finnair A350-900 […]