The A330 series of aircraft has surely outdone even Airbuses most optimistic sales forecasts over the past 25 years. It has gestated from a medium-range widebody to become an eminently capable and versatile platform for a wide variety of roles. The result has been orders for nearly 1500 units, not including the new A330neo spin-off line. Unsurprisingly this success has not been overlooked by the 1:400 manufacturers and all of them are active in this space nowadays. In fact, there are currently six active A330 moulds for each of the A330-200 and A330-300. In this review I go back to the start with one of the newer moulds – that of Panda models.

The A330 especially appealed to the Asian majors who regularly operated large widebodies on short-medium haul services. Thai Airways was an early customer placing its order in March 1987 before the programme was officially launched in April. The A330 would go on to have a lot of success in the region, becoming the lynchpin of the fleets of Malaysia, Korean Air, Cathay Pacific, Dragonair, Garuda and others in the 90s, well before the Chinese mainland market had woken up.

It was however the French domestic airline Air Inter, which would place the first order and be the launch customer for the type. It seems madness now to suggest operating A330s on French domestic routes but this was well before the arrival of low-cost airlines and Air Inter already operated a large fleet of A300s. In that context its order for 5 with 15 options doesn’t seem quite as crazy. 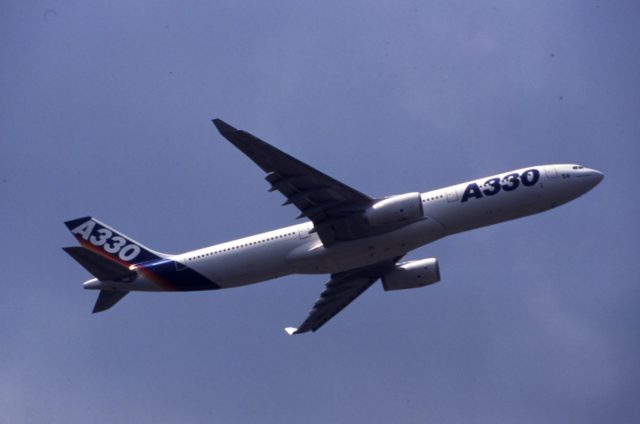 The first A330 was rolled out on October 14, 1992 and took off for its first flight on November 2 powered by General Electric CF6-80E1 engines. She was demonstrated at the 1992 Farnborough airshow and in a sign of things to come was the largest twinjet ever flown at the time. Service entry was achieved on January 17, 1994 the same month that the prototype F-WWKA was re-engined with Rolls-Royce Trents and became an A330-342.  It was in this configuration that F-WWKA was displayed at the 1995 Paris Airshow. 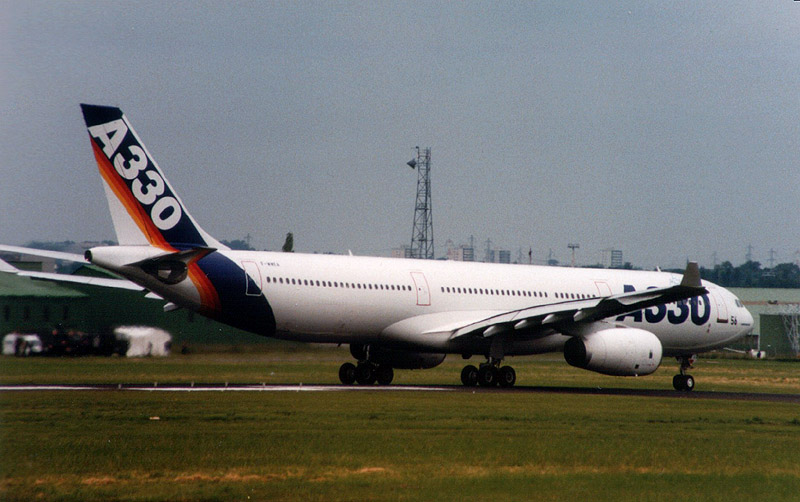 The prototype was delivered to Cathay Pacific in October 1996 as VR-HLJ (changed to B-HLJ one year later) and now serves with the fleet of the Cathay Subsidiary Cathay Dragon. From the early build 212-ton, 3,900 nautical mile aircraft the basic A330 has matured into a 242-ton, 6,100 nautical mile aircraft showing that the essential design for the big twin has provided plenty of scope for achievement, eclipsing its brother the A340 as well as the early 767 and 777 derivatives.

Considering how crowded the field is for A330 models and the number of moulds I’m surprised to learn I only reviewed one last year (by Phoenix) and one so far this year (by Aeroclassics). With the new NG mould on the market it seems an opportune time to revisit the type as my detailed A330 mould review is now a little out of date with both Aviation400 and NG Models versions available.

The last Panda A330 I reviewed almost won model of the year in 2017 and the Panda Models A330 is still right up there with the best of them. In truth the mould is close to perfection. The nosecone, fuselage, wings and stabilizers can’t be faulted. The undercarriage is also excellently detailed and positioned, however the colour and detailing of the wheelhubs is not as good as on the Aeroclassics and Phoenix moulds.

1992 was well before the existence of Wi-Fi so this aircraft is devoid of domes but does include three aerials, including a very small one offset to port on the rear belly. Altogether it beats the Phoenix for undercarriage and underwing detailing, beats the Aeroclassics at the nose and aerials, and beats the JC Wings everywhere except on under fuselage detail. In relation to the NG mould I can see barely any difference between the two, which is a testament to the quality on show.

Both Panda and HYJLwings have taken to producing house colours version of their moulds in recent times with almost universally excellent results. This A330 joins the recent-ish Panda A320-100 and HYJLwings A321-100s, which wear the same 1990s house colours. These are an attractive blend of blue, red, orange and yellow on a mainly white livery. In truth it is very simple. 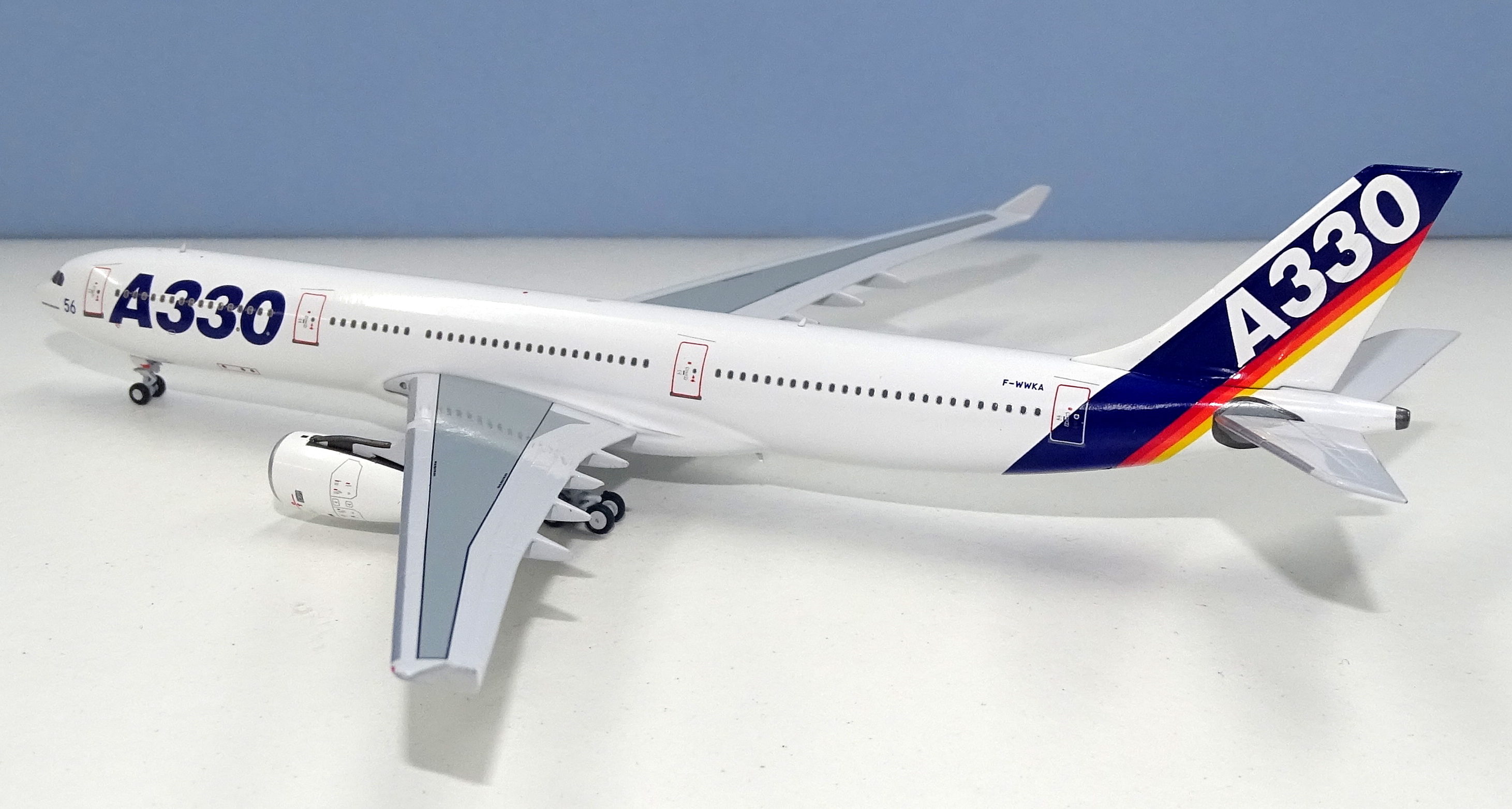 The only divergence for this model is that it wears the number 56 at the nose, as it did during the 1995 Paris Airshow. Interestingly when the same aircraft was fitted with the GE engines she had 57 on the forward fuselage instead.

The livery is so simple that there isn’t much to get wrong and indeed the application of the colours, tail design and main titles is perfect. The only point of contention is that the 56 is a mm too far forward and the font is perhaps not quite bold enough. 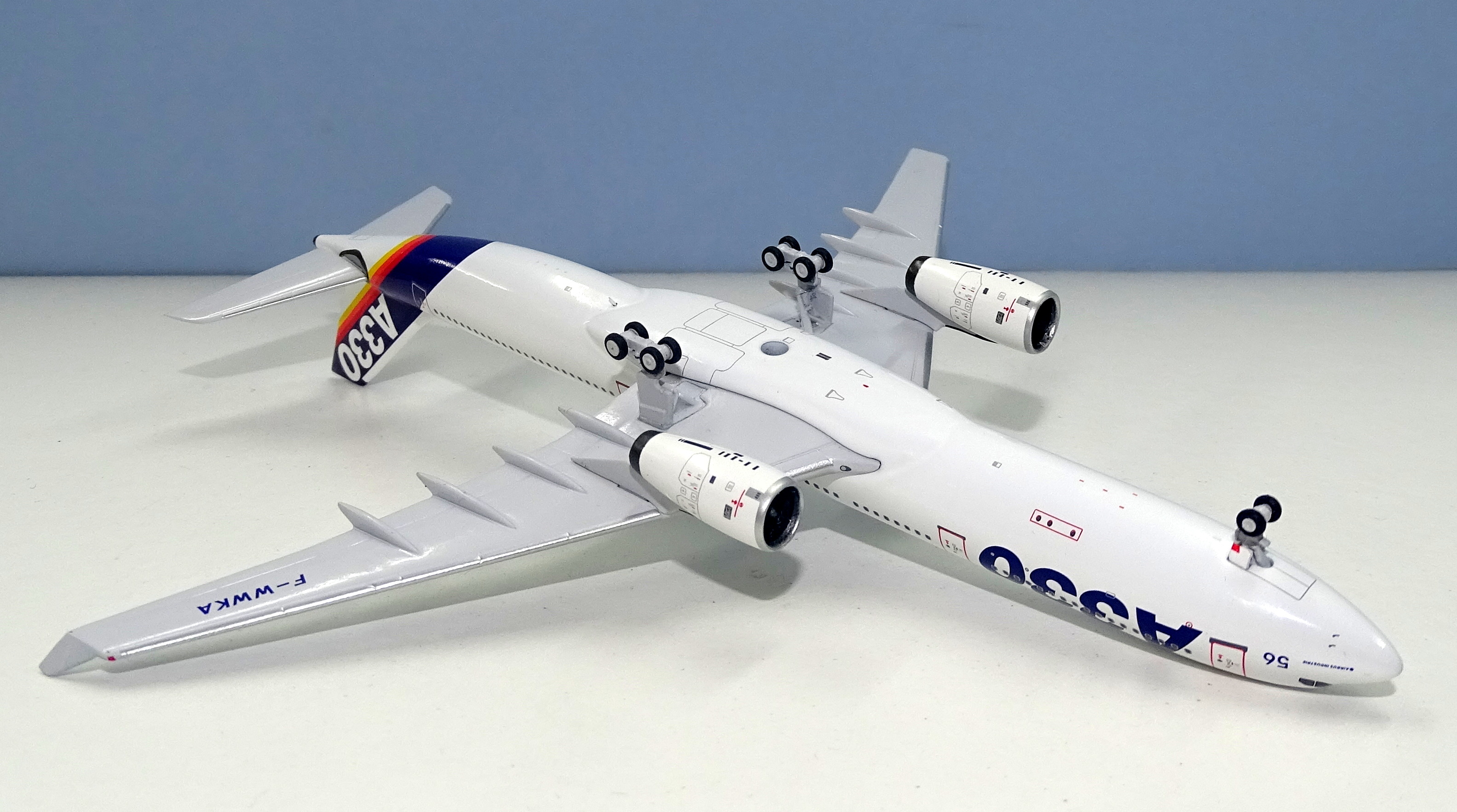 A mainly white fuselage gives plenty of opportunity to show of the excellent print detail Panda Models can achieve. The detailing on the engine nacelles and around the cargo doors is superb. I do note that Panda do not bother with the nosecone detailing but frankly this is almost invisible in most photographs let alone the model. Also to be noted with this model is the high quality of the engine nacelle finish around the rims and inside onto the fanblades.

Build quality is very good throughout except that the nosegear is not quite straight. The gear leg angles slightly forward. It doesn’t bother me enough to try and rectify it, something that is often possible with care, but it isn’t the natural position for the mould.

Admittedly this is a super simple livery to apply in 1:400 scale but even so it is a beautiful A330, and proves that the Panda version is more than a fitting competitor to any of the other available moulds, even when there are a collection of solid other moulds to choose from. Despite this it is surprising that only Panda have thought to produce the house colours aircraft and unsurprisingly their version demolishes the old 2002 Dragon version of the same aircraft. It is proof that even on very popular types in 1:400 scale there is still room for differentiation if the manufacturers try.

Gemini Jets release of Donald Trump’s VIP B757 model has undoubtedly been one of this year’s hottest items for diecast aircraft collectors. The model sold out almost instantly and now can only be found on […]