The growth of Air New Zealand over the past twenty years has been impressive, fuelled by savvy leadership, a strong economy and the booming tourism market to New Zealand, particularly from Asia. Until recently the backbone of much of that success had been the Boeing 767 for which the airline had been a long-time operator. Aeroclassics has been using its 767-200 mould to good effect recently and this release gives another opportunity to compare it to an older model, in this case the Dragon Wings release from all the way back in the year 2000.

Air New Zealand was in a drastically different position in 1982 to where it is today. The airline had only taken on its modern form in April 1978 from the merger of the domestic national airline National Airways Corporation (NAC) into the previously international only Air New Zealand. By 1982 the combined airline was making a loss of $90 million. The result was a restructuring that saw major job losses but also an increase in traffic by 10%. By 1984 the carrier was back in profit to the tune of $133 million. 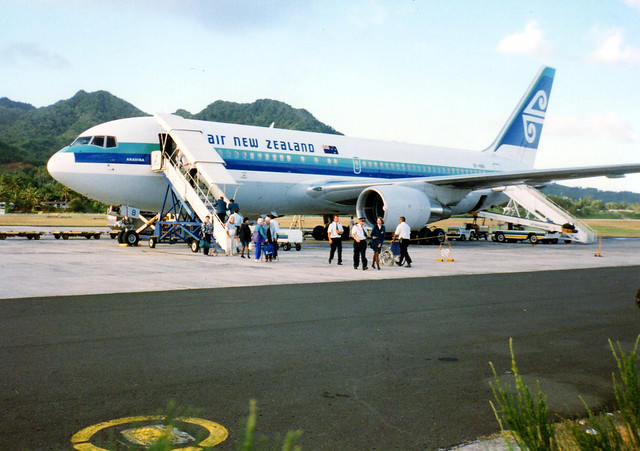 It was also on the lookout for new equipment, particularly as the last passenger DC-8s had left the fleet in 1981 and the last of the DC-10s had gone by the end of 1982. This left a huge gap between the new 747-200Bs and the 737-200s. To plug that gap Air New Zealand settled on the new 767-200ER and ordered three aircraft for delivery in 1985, all powered by the General Electric CF6-80A and leased from GPA Group.

The first to arrive was ZK-NBA on September 3, 1985. The 767s allowed Air New Zealand to restart international services from Wellington. These had been suspended when the last DC-8s had been withdrawn. The DC-8s had not been able to compete against a Qantas 747SP operation but by 1985 Qantas was also using 767s. 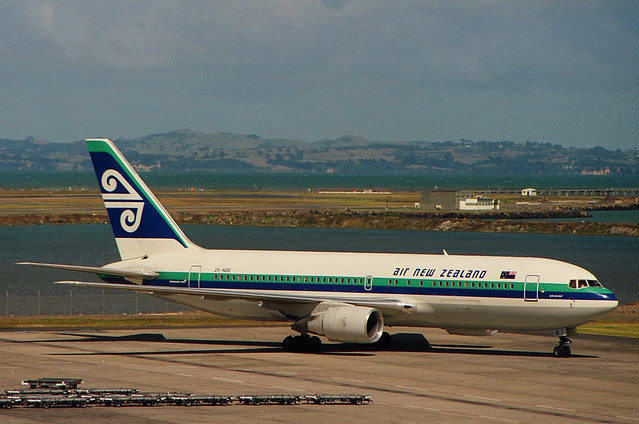 The 767s were equipped in a 220-seat configuration with 7 abreast and would be used both domestically and internationally. Air New Zealand would add a fourth 767-219ER in 1988 and also lease an ex-Braathens example in 1987. Two more would be added in 1989, both ex-China Airlines, and several Britannia Airlines examples would be leased in the 90s. The series 200s were versatile platforms for NZ and would eventually be replaced by the larger series 300.

ZK-NBB, named ‘Arahina’ (which means guide in Maori), was withdrawn in April 2004. Along with her two original sisters she was converted to a freighter and exported to the Danish register for Star Air. Despite her 33 years of age she continues to serve in this capacity as OY-SRF.

Aeroclassics are getting good mileage out of their 767-200 mould, which debuted in mid-late 2018. It is a sound mould and usually, but not always, a worthy successor to the older Dragon Wings and Gemini Jets moulds. The only previous release of an Air New Zealand example was by Dragon Wings and so looking at the mould here I’ll compare the two.

The Aeroclassics fuselage shape is excellent, especially at the nose and tailcone. The blunt rounded nose of the 767 is re-created well and I can’t fault the tail region either. The old Dragon mould is also pretty good in these areas but the early Air New Zealand example does have an inferior nose region. The Aeroclassics has a very tight wing/fuselage join and the wings are angled well but so does the Dragon.

Most short 767s never received Wi-Fi domes and had limited aerials so the customary lack of them from Aeroclassics isn’t a major. Nonetheless all three are missing (one up top, and one forward and backward on the underside). The Dragon mould is so old that it obviously doesn’t have aerials either.

Under the wing the Dragon Wings mould is superior. The Aeroclassics’ engine pylons do not reach far enough to the rear and the shape of the rear engine nacelles isn’t correct at the upper and lower margins. The engines themselves are decent representations of the CF6-80C2B2 at the nacelle but should have a longer exhaust without the cone being visible. Dragon Wings pays attention to the engines and gets all three of the above criticisms correct. It is annoying that Aeroclassics often creates generic looking engines and plays a little fast and loose with their usage. 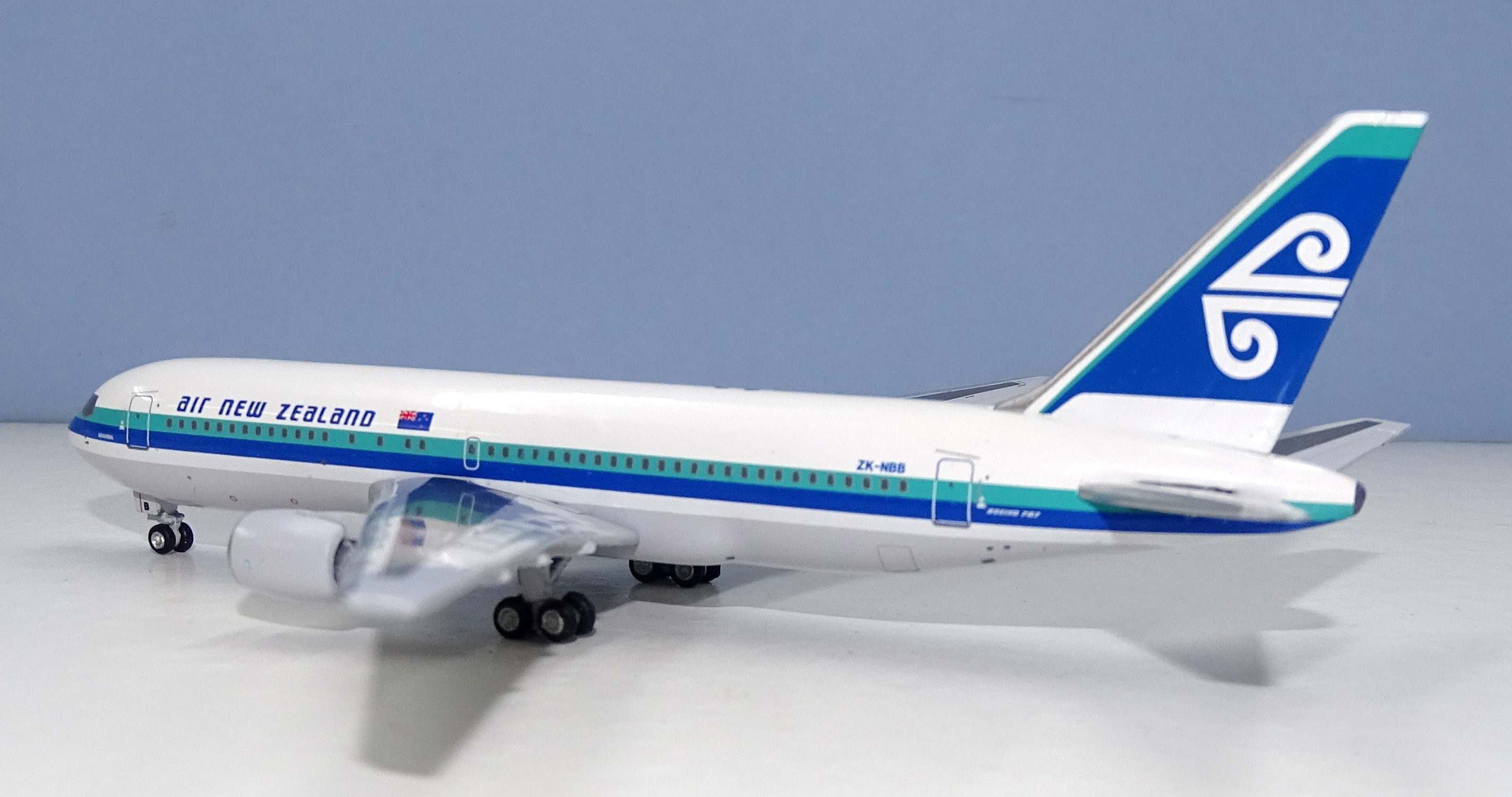 Aeroclassics has finally recognized it needs better tyre hubs and the 767s have wheels which are not just tyres on a metal rod but have accurate tyre-hubs. It is a major improvement, although the nosegear tyre is now a little too large. The maingear is nice but the doors aren’t particularly accurately shaped. As you’d expect the gear legs and tyres are much better than the Dragon Wings however it is the older model that has the better gear doors both at the nose and maingear.

The Aeroclassics 767-200 is on par with the older Dragon Wings, however it isn’t light years ahead. The nosegear is slightly too large, the maingear doors incorrect and it lacks aerials. These are all relatively minor considerations however and I can highly recommend it as the base to grow your 767 collection, especially when taken together with superior print detailing. 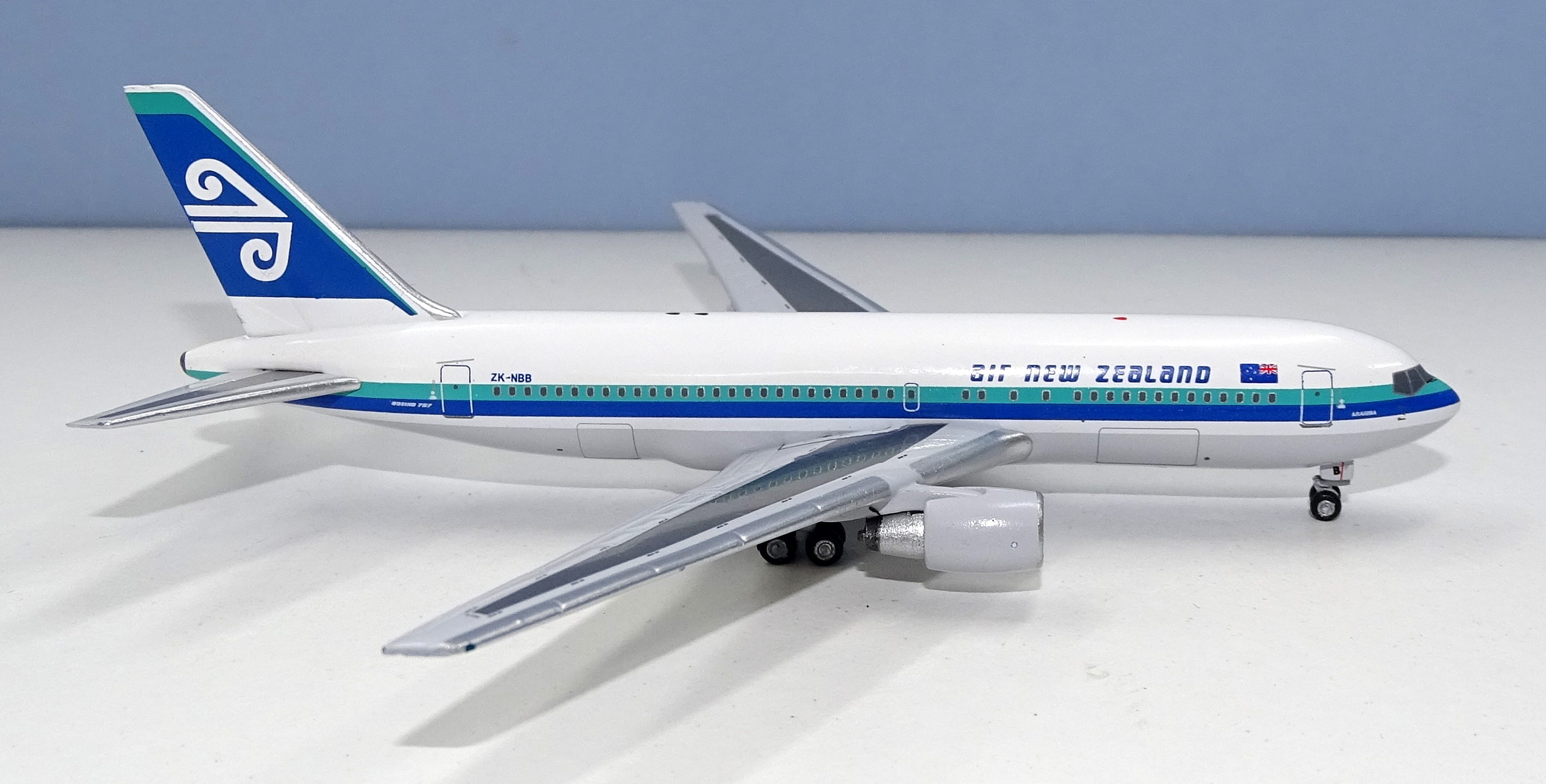 The classic teal and blue Air New Zealand livery of the 1980s has been poorly treated by various model manufacturers. I own an Aeroclassics 737 where the teal is light green and a Gemini Jets 747-200 where it is dark green. Dragon Wings has a decent mid-green version on its 767 however I think Aeroclassics has actually come closest here with their version of teal. It looks good as does the dark blue that has been used. 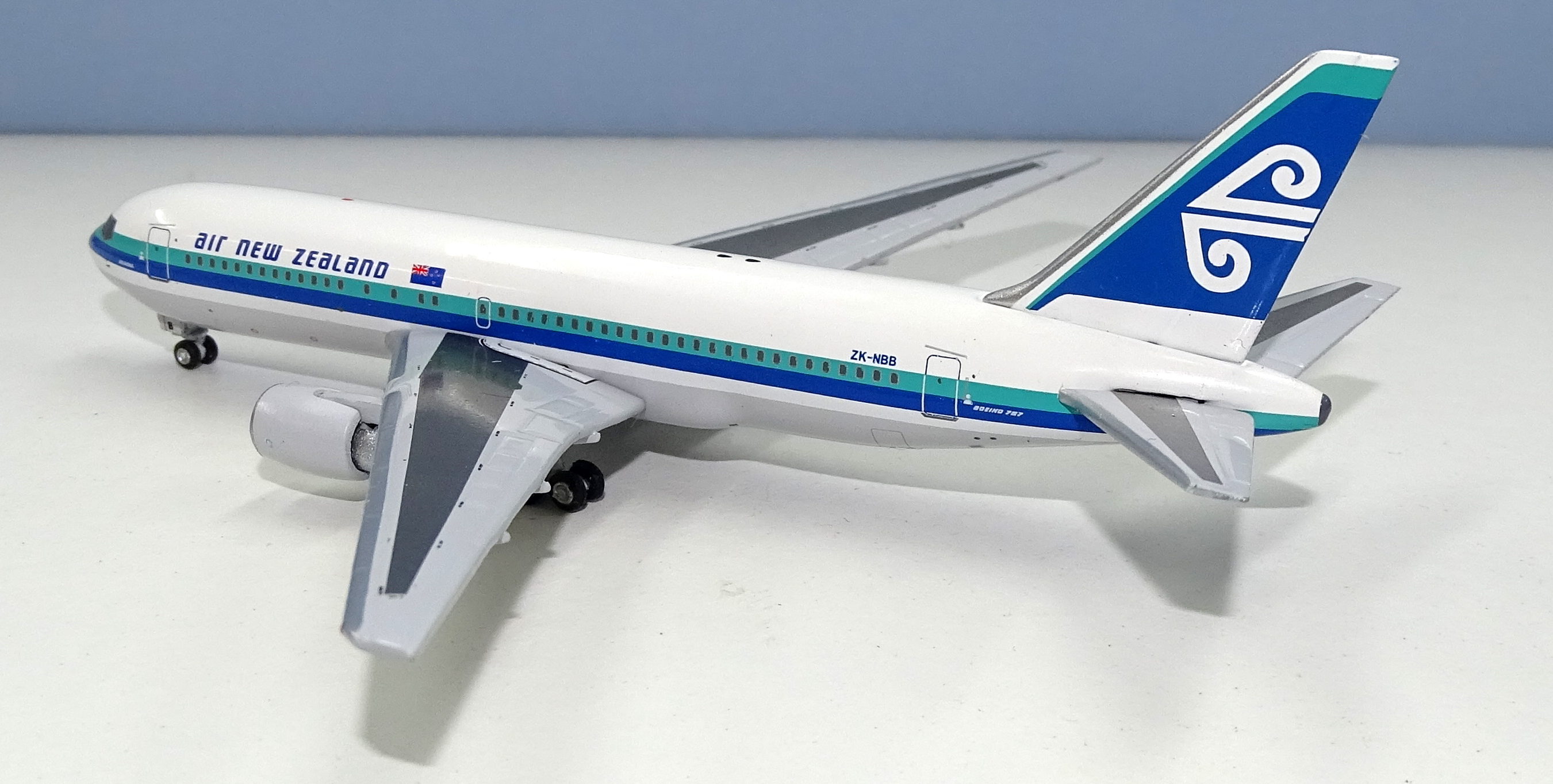 The positioning of the livery is also pretty decent albeit the cheatline is marginally too low (by perhaps a mm). This is a recurring feature of Aeroclassics 767s but it isn’t a major fault by any means. The grey belly and engines are spot-on as are smaller details like the Boeing 767 titles and aircraft name ‘ARAHINA’. Aeroclassics also manage to use the correct New Zealand flag. This should be easy enough, but it has not always been the case (see last year’s Fokker F27).

Aeroclassics has been working hard to improve some printing issues with its template that have been seen on earlier 767 releases and the result is that three of the four previously identified issues are no longer a problem. The passenger entry doors are a better length, the rear belly cargo doors are tall enough and there is correctly only one set of overwing emergency exit markings. The only printing detail missing is the navigation lights near the wing root. Compared to the Dragon the printing is a lot more detailed, as you’d expect. The Aeroclassics is superior across the board in this department aside from the missing navigation lights.

Maingear undercarriage bay doors are now being printed as standard on the 767s and the tiny no-step markings on the wing are excellent.

Construction wise this model comes very well made. There are no loose or broken parts or unsightly flashing around the gear legs, however the port-side maingear door is a little rough and the rear tyre doesn’t sit totally flat.

In general, I am very pleased with the Aeroclassics 767-200s, although I admit I’d like the nosegear tyre shrunk and the gear leg lengthened to accommodate that. In this case I think it is sufficiently better than the original Dragon example to warrant replacing it, but nonetheless the imperfections that often creep into Aeroclassics releases don’t necessarily mean this will always the case.

Next Week at The Diecast Flier

As we wrap up another week of reviews and model news, checkout some of the exciting articles The Diecast Flier has in store for the week of June 12th! Phoenix Models Aeromexico 777-300ER “CDMX” 1:400 […]