Whereas the future of the 737 MAX series hangs in the balance the A320NEO families seems assured and even bolstered by the travails of the Boeing. Certainly, Airbus has played a very savvy game in China assisted by its willingness to enable final assembly in the People’s Republic. Interestingly in 1:400 scale although Panda Models has recently built an A321 casting HYJLwings, who had owned this space for the whole of 2018, have gone decidedly quiet. This Sichuan NEO represents their last release, and was announced in December. Hopefully HYJL are not gone for good.

Sichuan Airlines is unique in China amongst the larger airlines in that it is not firmly in the stable of one of the big four groupings (Air China, China Eastern, China Southern and Hainan Airlines). Actually, it is technically related to three of the four, with all except Hainan Airlines owning a stake, but none having majority control. The largest stake is instead owned by Sichuan Airlines Co. Ltd with 40%, just a single percentage point larger than China Southern’s holding. China Eastern and Air China each have 10% ownership. This presents the airline as somewhat independent and it codeshares with almost everyone, crossing alliance boundaries and freely.

Sichuan Airlines has long been an Airbus customer acquiring the first A320s in China way back in 1995. It was also the first A321 customer in the PRC adding the first two in 1998. The A320 family has been perfect for Sichuan’s growth and the fleet now stands at 135. Naturally the NEO variants have also become important components of late.

The first A321NEO for the airline was delivered on June 1, 2018. Sichuan has chosen the Pratt & Whitney PW1133G engine for its NEOs, which are being acquired from various leasing companies. The first aircraft, B-8682, is leased from Air Lease Corporation but others have come from AerCap Holdings and BOC Aviation. Some of the growing fleet of NEOs are owned outright by Sichuan and B-302Q was seemingly the first of these to arrive.

She was delivered on September 20, 2018 and is one of many Chinese aircraft that incorporate the alteration in Chinese registrations sequences away from solely numbers with the addition of a letter at the end. This is presumably a sign of the increasing size of the Chinese fleet as a whole and the exhaustion of number only registration options.

Sichuan Airlines certainly is contributing to this growth accepting both A321ceos and NEOs alongside each other. There are now eleven of the latter on strength with three further aircraft on order.

Much like any other mould that has come out of the NG Models factory the HYJLwings A321 (in all the 6 variants available) is about as good as you can get a mould in 1:400 scale. The shape of the fuselage is excellent, and the attachment of the wings and stabilisers to it tight and beautifully detailed. The mould is almost indistinguishable from the Panda Models A321 but predates it by over a year.

Ignoring the Panda competition and comparing to other A321s and the HYJLwings easily beats them. Looking at the undercarriage for example. It is such a negative point on the JC Wings mould and one of the less good aspects of the Aeroclassics. Here the tyres are excellent, both in size and detail, whilst the slightly forward angle of the gearleg and size of the gear doors are accurate. The maingear also has proper tyres with wheelhubs. My only minor qualm is that the gear leg on the nosegear is slightly too short.

The wings are another big differentiator between this mould and half of the other 1:400 A321s, aside from the Panda and Gemini Jets versions. Neither Phoenix or Aeroclassics have ever produced an accurate Sharklet equipped A321 wing, instead choosing to reuse their A320 wing inaccurately. HYJLwings do not make this blunder. The double-slotted flaps and extra flap track fairings are present and excellently reproduced.

The large Pratt engines are well hung on their pylons and achieve a remarkable accuracy with the real thing, especially with the angled front rim shape. There are no ground height clearance issues and from the front you can see the fanblades are really well detailed. They may not spin like the new Phoenix neos but the engines as a whole look better.

In short this is a topnotch casting.

Sichuan Airlines continues to use a rather retro feeling livery. Some may find this disappointing but personally I find any airline that isn’t using a Euro-white fuselage to be doing aviation a favour. The centerpiece of the livery is the Haiyan (the Chinese word for the Petrel seabird) logo on the tail, which symbolizes the company’s entrepreneurial spirit. The circle represents the Earth and the four waves rivers joining the sea and bringing back virtues.

An important aspect of the livery is that unusually only the registration markings are black. The tail logo outline and fuselage titles are blue. This has been lost on Aeroclassics in the past but isn’t on HYJLwings. The main red is on target and the positioning of the triangular cheatstripe perfect.

There are no imperfections with the livery application whatsoever. Little details like the sharklet logos, A321neo titles and the under/overwing registrations are all good. The very retro grey belly is also well done. 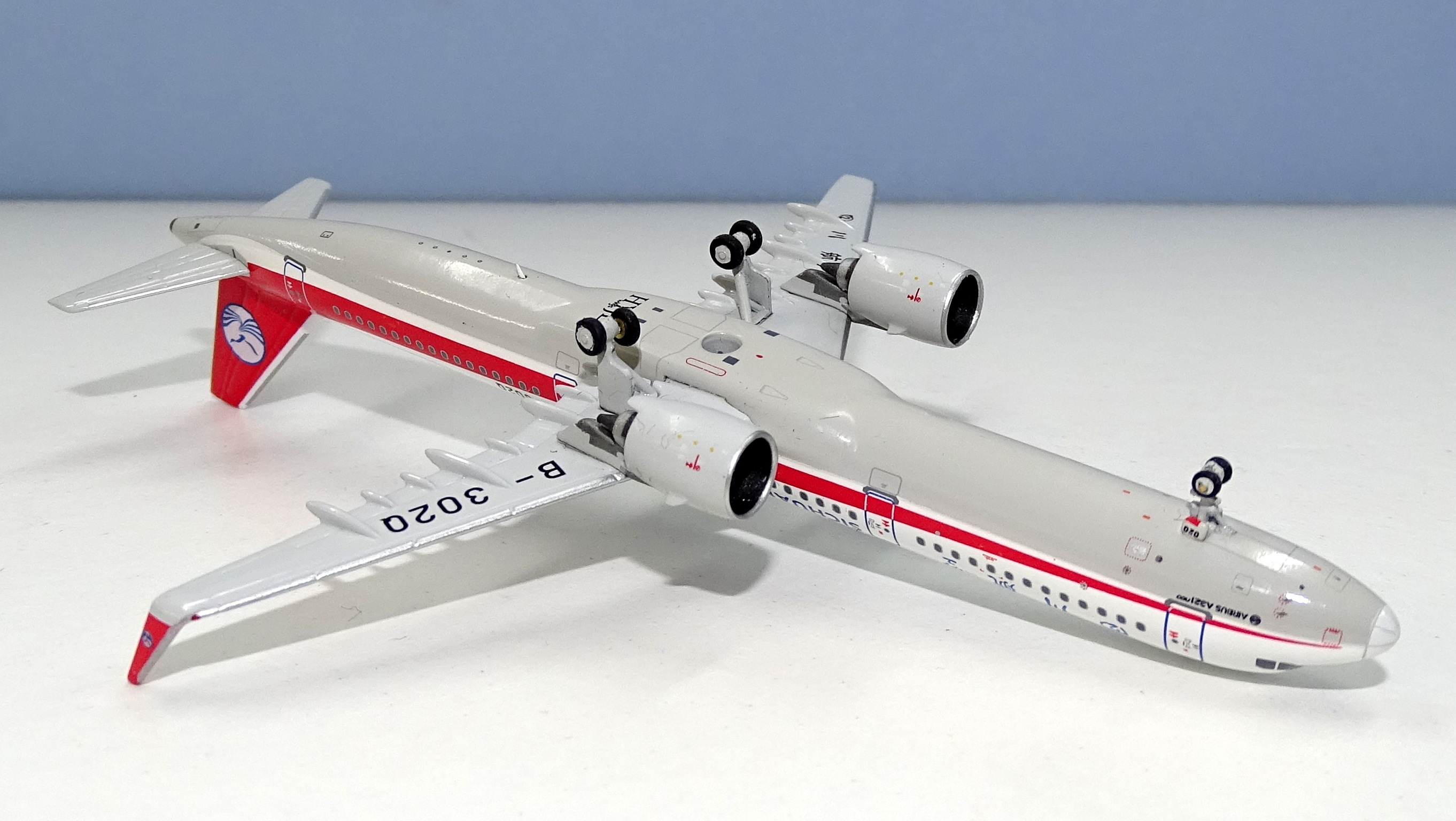 The printing detail and finish is at the usual exceptional end of the spectrum for an HYJL release. They have no problem with detail like the nosecone and doors. In fact the doors actually show even more detailing than is actually readily apparent on the real thing. The only area of print missing is the obvious line around the wing/fuselage fairing, which all the manufacturers seem reluctant to print in case people think it is a seamed mould.

The let-down for this model is in the detail finishing. Whereas the major components are firmly attached the middle aerial between the wings and tail is missing. This is actually only the second time I have ever received a model with a missing aerial. These things happen I guess from time to time.

Also, a little untidy is the nosegear. I’ve already said it is a bit short but the finishing on the nosegear tyre is also in closeup not great. I should also point out that this latest HYJLwings is the first one that I have received that doesn’t have the trademark wooden box with it. It instead has a standard card box, but the insert remains the white foam and it still comes with a collector’s card as well. Mine was no 34 of only 80 units made.

HYJLwings remains an excellent brand for boutique A321s made with the highest quality. Presumably the new Panda A321 won’t terribly impact such small production runs as 80 units, however I admit that at least in the Chinese market Panda models are priced substantially cheaper than HYJLwings. I look forward to seeing what future plans HYJL have.

Phoenix seem to continue on oblivious to the rest of the 1:400 world producing much the same types of model as they have done for years now. That would not be so damning if their […]

New liveries must be a boon to the model manufacturers especially when they are for globally recognised brands like Air Canada. Even Phoenix has been interested in the Air Canada rebrand and they almost never […]

The DC-9 arrived just as many of the US local service airlines were looking for their first pure jets but in the absence of a working DC-9-10 mould we in 1:400 are only able to […]