With the recent announcement that A380 production will cease in 2021 it seems fitting that I should review an A380 in 1:400 scale, and in fact the first A380 delivered. Despite its lack of sales success in the real world the type has been popular amongst model collectors, although in recent years here have only been two moulds juking it out – the familiar adversaries of JC Wings / Gemini Jets and Phoenix. Phoenix have long worn the crowd as king of the A380 makers but does this recent ‘retro’ A380 change that?

It was hard for Airbus to take much solace from Boeing’s nightmare with the Boeing 787 development when they were having a similarly hard time with their own A380, but after a multi-year delay the launch customer, Singapore Airlines, finally took delivery of their first aircraft, 9V-SKA, on October 16, 2007. The SQ CEO said at the time:

“From today there is a new queen of the skies for air travel …The 747 is a good plane but it is not an all-new design. This is the plane for today and tomorrow.”

This was hyperbole at the time and hasn’t really come to pass, however the A380 was a valiant attempt at hitting a new niche for slot-restrained high capacity routes. Unfortunately, the market has moved towards long-range lower capacity twins, offering frequency and greater fuel efficiency than the A380. The net result for Airbus is an eye-watering loss, but the A380 has proven to be a safe and reliable aircraft. Having travelled on the type myself I can say it was a great experience and certainly added some glamour and excitement to a trip.

Singapore’s A380s as you’d expect were well fitted out and came equipped with 12 suites, private compartments with sliding doors and fabric screens. Nonetheless the layout of the first A380s was not similar to the luxury of the first 747s and SQ still managed to fit in 471 seats (12 first class, 60 business class and 399 economy).

Singapore Airlines eventually took delivery of 24 A380s with deliveries stretching over a decade (albeit with a 5-year break before taking the last 6). These last aircraft in fact were delivered after the first retirements. 9V-SKA, the first A380 in revenue service, was retired on June 10, 2017 after only 11 years of service as their decade long leases expired.

The German investment fund, Dr Peters, who the first A380s retired from the SQ fleet were returned off lease to, undertook negotiations with several operators (including British Airways, Iran Air and Hi Fly) to take them but in the end failed to find customers for the initial four. The aircraft were instead stored at Tarbes in the Pyrennes but with A380 parts in high demand the decision was eventually made to scrap them and salvage their parts.

Only one of the 5 aircraft Singapore has retired has found further service. This was the 6th A380 built 9V-SKC, which now operates for wet lease specialists Hi Fly Malta. It remains to be seen whether the A380 has any resale market and no doubt the proof in the pudding will be when Emirates starts removing its earliest units from the fleet. Singapore continues to operate 19 A380s in its fleet and there is surely the expectation that they will wear the Silver Kris for some time to come.

JC Wings and Gemini get some stick for their A380 compared to the Phoenix version, however to be honest I think it is a bit harsh. This is even more so as it is clear that JC Wings has been trying, with some success, to improve the mould. 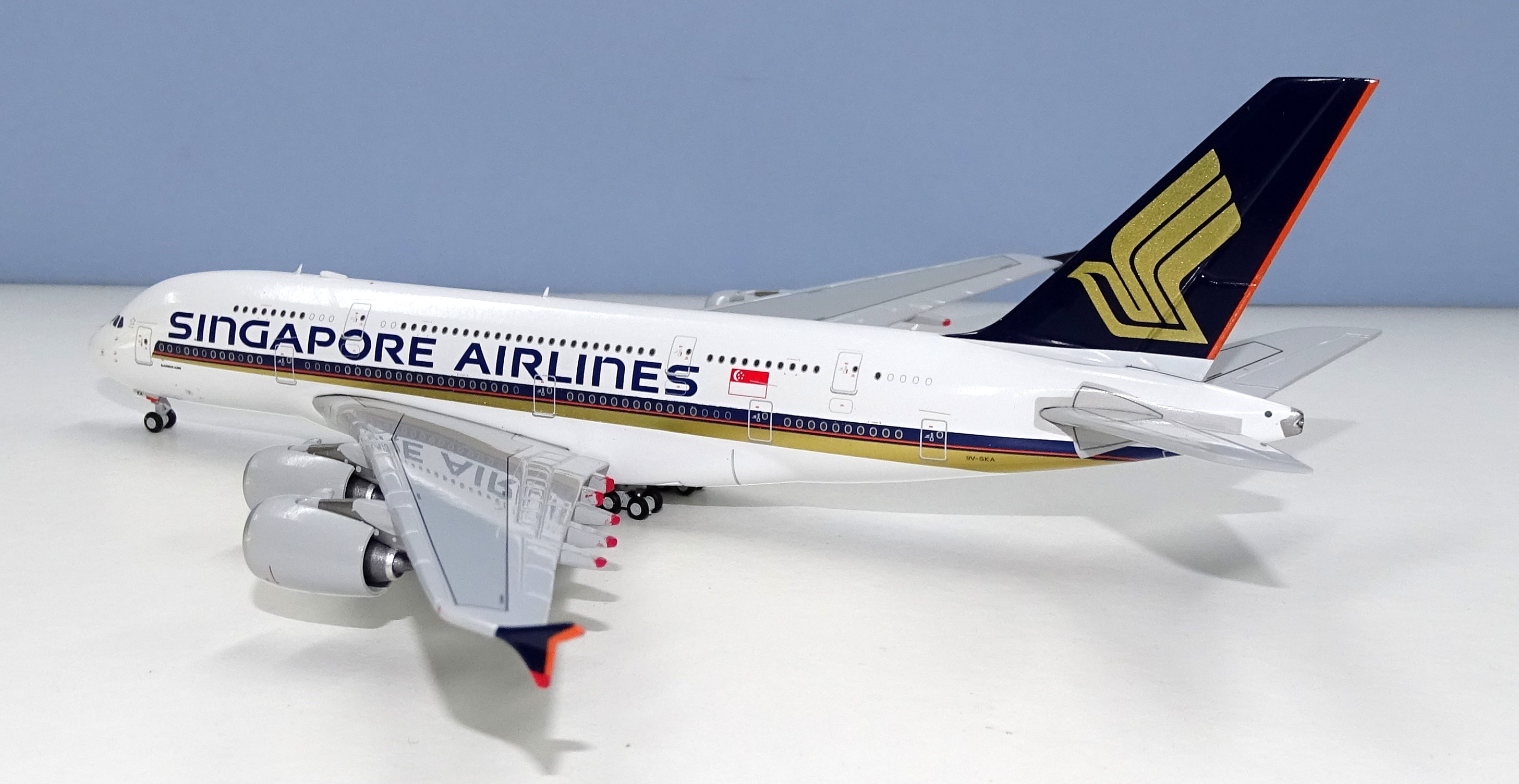 It is the nose that most people have complained about, and this is an area of models I’m very sensitive too myself. It is definitely not an exact replica of the real thing. Held up against photos of the A380 side on the nose cone is not tall or round enough, whilst the forehead, above the cockpit, is not quite the correct angle. In fact, I think the whole fuselage is probably not tall enough, however it still looks like an A380 and I’m not offended by the reproduction.

The rest of the fuselage is well shaped as is the massive vertical stabilizer. JC Wings have improved the mould in recent times by adding the previously missing fourth aerial (ahead of the tail) and by adding the small fuselage top radome just forward of the wing root. Both aerials and radome are well presented.

The undercarriage is well placed and looks good, although the nosegear main leg is a little simple and lacks the forward process. The main gear trucks all move independently of the gear legs and work well.

The wings are well shaped and fit tightly into the fuselage. They have an accurate join line and give the huge engines excellent ground clearance. Looking from the front I’m not sure the wings have quite the correct profile as they don’t curve strongly enough making the winglets almost at the same height as the fuselage top.

So, in detail this A380 isn’t perfect, however in general it captures the look and feel of the A380 well. Certainly, I have no hesitation in acquiring this version of the VLA.

Singapore Airlines has one of the classiest liveries out there and the mid-80s redesign of the previously yellow and blue scheme to add gold has aged tremendously well. SQ have also resisted the tendency to muck about with the scheme a lot and the only real change has been the supersizing of the titles. They are still not quite billboard sized and suit the A380 well. The tail logo represents both a bird (crane maybe?) and the mystical kris dagger. These daggers are highly prized and often passed down generations but also considered to have a presence or to possess magical powers.

As far as livery colours go the dark blue and gold are nicely represented. The gold is especially nice and really glints in the light. Unfortunately, the other colour on the scheme is I think a shade off. The thin line between the two blues of the cheatline should be a dark yellow or light orange, as should the rear margin of the rudder. JC Wings have instead used an orange, which is too dark.

I have no complaints about the placement of livery elements. The title font is perfect as is the cheatline. The lower margin of the tail logo is too low but it is only by half a mm or so. Other minutiae like the Star Alliance logo, model name and rego are excellent.

JC Wings printing is reliably excellent and this model has no printing flaws so to speak. I would say that the engines and underside are unusually devoid of much detail printing but much more concerning is the windowline. Although it is printed well the artist has chosen to do something weird with the windows. The upper windows are fine and have correctly blocked out windows, however the lower windowline is a mess. JC look like they have reproduced a complete window line, when a cursory glance at the real aircraft shows there are a lot of blocked out windows behind the L/R1 and L/R2 doors. I actually think they have tried to show the blocked out windows with less thickness around their rims but the result is almost impossible to see and it looks like a full window line even though it isn’t supposed to. On the real aircraft the lower blocked out windows are effectively invisible.

Build quality is good, although the starboard wing isn’t fitted quite as well as the port. The undercarriage is well put together but unfortunately an entire tyre is missing from the outer starboard maingear truck. It is on the inside so is not visible unless you look at the underside.

JC Wings have made 7 Singapore Airlines A380s, 5 of which have been in standard colours. The latest aircraft in the fleet do not have the unusual window arrangement of the earlier aircraft like SKA but even so it is a little galling that back in 2011 JC Wings made 9V-SKC and got the window arrangement correct, or at least the look correct! This is even more so since Phoenix have made 11 Singapore A380s and got the lower windowline arrangement correct on them all. I actually think technically the lower window is correct in this case but the difference between a real window and a blocked out one against the cheatline renders the extra detailing rather pointless. Regardless the model still passes muster as an example of SQ’s A380s.

The Boeing 757 is one of my favourite airliners having, in my opinion, grace, beauty, excellent proportions but also the look of power too. Not that many 757s get released in 1/400 anymore and those […]

Again, I find myself reviewing an American Airlines jumbo, yet this time it has changed to the 747SP, the smallest aircraft in the Boeing 747 family. Join me as I take a look at Inflight200’s […]