I have not been very happy with Gemini Jets for some time, however credit where it is due they have recently been dabbling in a more diverse set of offerings with at least one release a month you could call a classic of some kind. They certainly have a huge mould catalogue they can choose from, to dip into the history of aviation, and one of these unique moulds is the IL-62. Soviet era aircraft have been very rare in recent times in 1:400 scale, but the IL-62 has had a very small resurgence, primarily due to activity in North Korea, which has been picked up by JC Wings. It surprising and very welcome that Gemini last month announced a jump back into the 90s for a look at one of the Warsaw Pact airlines in its late stage of operations with the Soviet type.

TAROM inhabited a rather unique position among the Warsaw Pact airlines as Romania had more independence than most Pact nations due to the course charted by its post-1965 leader Nicolae Ceausescu. This flexibility allowed Romania connections with the West and TAROM was able to purchase Western jet airliners, beginning in 1968 when British BAC One-elevens were acquired, and followed in 1974 by Boeing 707s.

Nonetheless TAROM still sampled Soviet airliners as well and had acquired a pair of new IL-62s ‘Classics’, which were delivered in 1973 and were joined by a third in 1975. It is interesting that the 707s arrived very closely afterwards and is perhaps a reflection of the tightrope being walked by the Romanian regime between East and West. The IL-62s were apparently used for charters to popular Black Sea resorts whilst the 707s were used on the flagship New York services, which routed through Amsterdam, London or Vienna.

TAROM also acquired new TU-154s in the mid-70s and this return to Soviet equipment may have in part been due to increasing foreign exchange issues which were having a major impact on the Romanian economy and a factor in increasingly repressive rule by Ceausescu as well.

By 1983 the IL-62s were mainly utilized on services to Peking, via Karachi, and Tripoli where I suspect competition against Western types was less. During 1986 both of the IL-62Ms were leased to LOT of Poland. YR-IRE was leased to Cubana in November 1989 until August 1990. With LOT she wore merely additional titles but Cubana repainted her entirely. Despite the fall of the Iron Curtain upon the end of the lease she was retained in the TAROM fleet and repainted into the airline’s new blue colours.

The IL-62s actually remained in the TAROM fleet for most of the 1990s and YR-IRE wasn’t sold until November 1997, to Alphaline Kazakhstan. By May 1998 she was with Trans Asian Airways (who also acquired the other remaining TAROM IL-62s) and in June became UN-86501. They seem to have used her on flights to Hanover and Frankfurt as well as Sharjah into mid-2000 but vanished not long afterwards.

The IL-62 may not have been as efficient as even 707s, when it first entered service in the late 60s, but it nonetheless provided solid reliable safe service to TAROM for 26 years.

Moulds of Soviet era aircraft are rare in 1:400 scale but almost universally excellent and despite its age (the original tooling dates from 2004) the Gemini IL-62M is very nice. Although the IL-62 is frequently compared to the British VC10, when you see models of both side by side it is clear that they share only a passing resemblance, mainly due to the engine configuration.

The fuselage shape is very good. The nose shape and cockpit forehead angle aren’t 100% but they are close enough to provide the correct look. On the underside the mould shows well the bumps and strakes that gave the fuselage the designed extra strength to be able to survive gear-up landings.

This is a cradle mould but one where the seam line is tight and follows the correct lines of the fuselage. The long rear fuselage strake that runs under the engines (an aerial of some kind perhaps) is not moulded on but is printed. In fact the IL-62 has no modern style aerials on it at all.

The add-on components of the mould (wings, engines and tail top) fit snugly to the fuselage and vertical stabiliser. The wings are solid and correctly have the thick chord of the real thing. I have no criticism of the engines or tail, they are all well shaped.

One of the upgrades to the mould that has been made since its creation was the addition of new rolling gears (in 2011). The new nosegear leg is perhaps a little short but very well detailed compared to the older taller original gear leg. Unfortunately one detail missing is the small, but noticeable, nosegear doors.

The maingear has also been replaced with rolling gears, which well show off the huge tyres of the IL-62. One of the IL-62’s most characteristic features is the extendable rear landing gear strut under the tail, used to stop the aircraft tipping backwards when unloaded and on the ground. Gemini has catered for this novel feature with a detachable strut which can be fixed in place to represent the gear lowered or another piece which can be fitted inside the cavity to represent the gear raised.

This strut has been modified and is a lot thinner and more accurate than the older one. However the new tyre, although closer to the real size, is now smaller than the real thing rather than larger as it was before. It also requires some blu-tack or such to keep either of the gear extras fitted. Nonetheless it is a sign of a more dedicated Gemini of old that this feature was made. I can’t imagine the Gemini of today creating a new Soviet-era mould let alone adding such a feature.

The model livery is simplicity itself. The entire fuselage and the top of the tailplane are white. Only the wings, engine pylons and engines are light grey. The main livery colour is a dark blue, which is used for the tail and the main titles. The wingtips are red. Gemini has all these aspects correct.

The tail logo shows the TAROM flying bird inside a white roundel surrounded by a thin blue ring. It is well positioned and printed. The engines have IL62M correctly printed on them in tiny print. The main titles are well printed and use the correct typeface.

The red, yellow and blue Romanian flag features aft of the cockpit and an antri-glare mask sits around the cockpit. It is only the latter which is not accurate. The mask on the model does not reach to the last window or curve down enough at the front. It does however correctly stop at the nosecone. 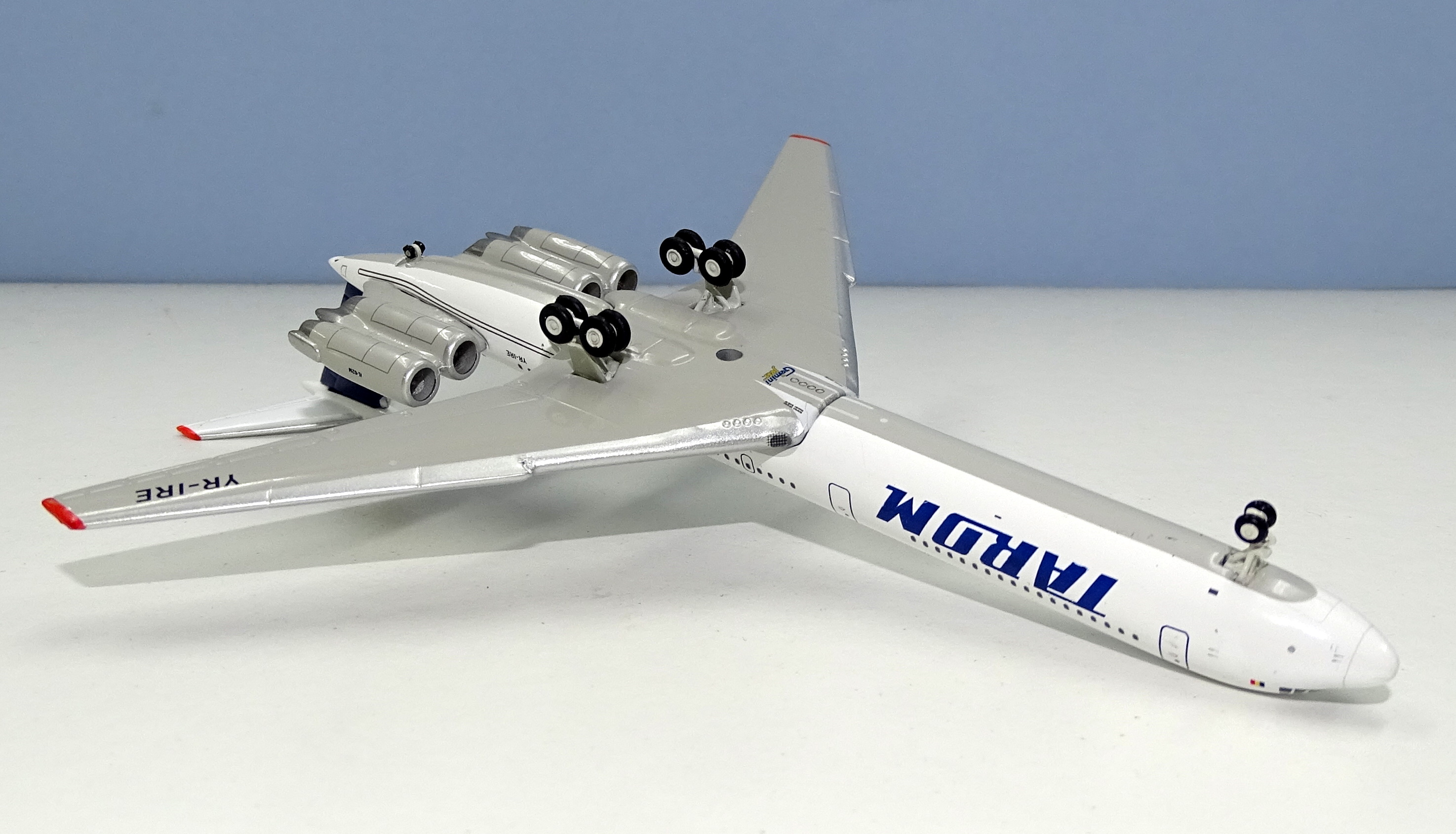 This mould has a lot of detailing on it that removes the need for extra printing, especially on the underside. The printing that is present is strong, including the complicated many window cockpit. The unusual window and door configuration is also good including the three small spotlight windows above the engine pylon on each side.

I would like the wheelhubs to have been silver rather than light grey as they rather stand-out, especially when the tyres are so large, for the wrong reason. The internal fanblades of the engines are also rather silvery.

Construction quality is good across the entire model aside from the maingear. The gearlegs look a little bent and neither of the rear tyres on each side actually touch the ground.

This model harks back to a forgotten age when Gemini Jets were a major component of my collecting. I really like the IL-62M mould and it has been sensitively updated to modern standards. I would love to see more usage of it, especially if new engines could be crafted to represent the earlier IL-62 variant, which I’d have thought would be a simple task. This is the sort of competition I want to see Gemini undertaking. Unique well thought out models that fill new territory in customer’s collections. Kudos to them for producing an excellent classic. Hopefully it won’t be the last IL-62 we see.

Today I will be comparing the models of 2 different manufacturers, with their McDonnell Douglas DC-9 and MD-80 line up.