AeroPerú is one of the great South American flag carriers of yesteryear and also one of the most colourful. It is great to see someone making classic releases still and Aeroclassics have in the past few months made 3 different Peruvian DC-8s with three different schemes on them. From what I’ve heard they were made in very small numbers, which probably accounts for why they have sold out everywhere.

AeroPerú was formed in May 1973 by the Peruvian government, out of an earlier army airline called SATCO, as a new national carrier to replace the recently collapsed APSA. Services began in October using a trio of Fokker F28s but international services were the main goal. These were achieved the following year when the airline acquired a pair of former VIASA DC-8-54s, which enabled it to inaugurate services to Santiago on July 28, 1974. The airline’s route network grew to include destinations in Central America as well as Miami and Los Angeles, whilst the fleet was renewed in July 1976 when a trio of leased Air Jamaica DC-8-51s replaced the existing 3 DC-8s. These aircraft all wore a very colourful pink and red livery and included OB-R-1123, the former 6Y-JGD with Air Jamaica. She had actually started her career in December 1964 as N8779R with Eastern Air Lines. They had only operated her until December 1970 when she passed to the Jamaican flag carrier via McDonnell Douglas.

She operated with AeroPerú until May 1980 by which time she had been re-registered as OB-R-1181. AeroPerú itself had acquired a pair of ex-PSA Tristars on lease in 1979, which were painted in a still colourful but more sober livery. Despite the Tristars the future fleet would still be built around DC-8s, however these would be the more modern series 62 several of which were acquired in the early 80s. The airline’s last DC-8-51 was returned to Air Jamaica in February 1981. OB-R-1181 took up her old Jamaican registration upon her return to Air Jamaica but was withdrawn from use in June 1981. She was sold to Charlotte Aerospace Co and stored at Laurinberg. Her hulk survived until at least the middle of 2000. She had a total time of 40,741 hours in flight.

For a more detailed history of AeroPerú and their DC-8s see part 1 of a 3 part series at Yesterday’s Airlines: Covering Peru Like the Sun: AeroPerú in the 1970s

Aeroclassics makes awesome classic airliners and their series of DC-8 moulds are very, very good. When compared to the chunky old Gemini DC-8 mould with the thick wings and ugly giant undercarriage these DC-8s are a work of art. The DC-8-50 series mould is very fine and almost perfect, down to the little tail bumper just under the rear door.

I have no complaints about the shape of the mould with the tail, fuselage, wings and engines all nicely replicated. The mould’s one weak spot is that it is a cradle mould, however the wing join seam is nicely done and doesn’t heavily impact the look of the model. These old DC-8s had only one antenna (just after the forward passenger door on the roofline) so the fact that Aeroclassics chose to leave them off their more modern airliners doesn’t matter so much here. The only other negative trait is an Aeroclassics wide one – i.e. the tyres have no proper hubcaps and are just fitting directly to the spigots. Neither of these two minor mould issues have any major impact – it’s a great moulding.

This livery screams of the 1970s, with its insanely bright red and pinks, but because of that it is quite a hard livery to replicate. As is often the case with historic liveries creating a replica of it is no doubt made harder by the limited source material for images and the colour imperfections evident when looking at non-digital photos. There are three photos of this particular airframe wearing this livery on Airliners.net so I suspect they were used as the source for the model. Anyway with the excuses out of the way how have Aeroclassics done with this model?

As I have said repeatedly colours are not my strongpoint, but even amongst the three photos I have seen there is a marked colour difference. One of them shows much stronger colours than the other two and is probably the photo used for the model since it is also the best quality print. I will use that photo to compare the colours Aeroclassics have used. The grey belly, pink mid-stripe and red roof are all fine as is the very thin white stripe between the grey and pink. The tail however is not correct. On all the photos I have seen the rudder, which replicates the Peruvian flag, is a darker red than the rest of the vertical stabilizer, which matches the fuselage roof. On the model however the whole tail is a darker red than the fuselage roof. It’s the sort of mistake you only notice when you look at the real thing.

The details of the livery are also quite good but perhaps not perfect. The white door and emergency exit outlines plus silver cockpit window frames are all good. The titles on this livery are very small. I’m not certain the font is 100% correct but it’s close enough. It is however certain that the registration font and size are not accurate. On the model the O and R are curved, whilst on the real thing they have straight sides. I also don’t think the registration is quite tall enough. It is a very minor point, however.

In general the livery is good but I have to knock a few marks off for the tail colour and rego font.

The printing on this model is good and there are no missing bits; having said that this old DC-8 has little in the way of extra printing bits on it. I do note that Aeroclassics print a window on the main forward door, which the aircraft didn’t have, but that is insanely nitpicky of me. More problematic is the fact that the tail logo is not printed level on either side of the tail. You’d think that would be quite easy to get right.

The other issue I do have with this model is the amount of paint used. It is quite heavy and in a few places rather masks some of the moulds finer details. This is most obvious on the rudder and the characteristic lower nose intakes, which are almost obscured. That’s a shame as the mould has the details on it. 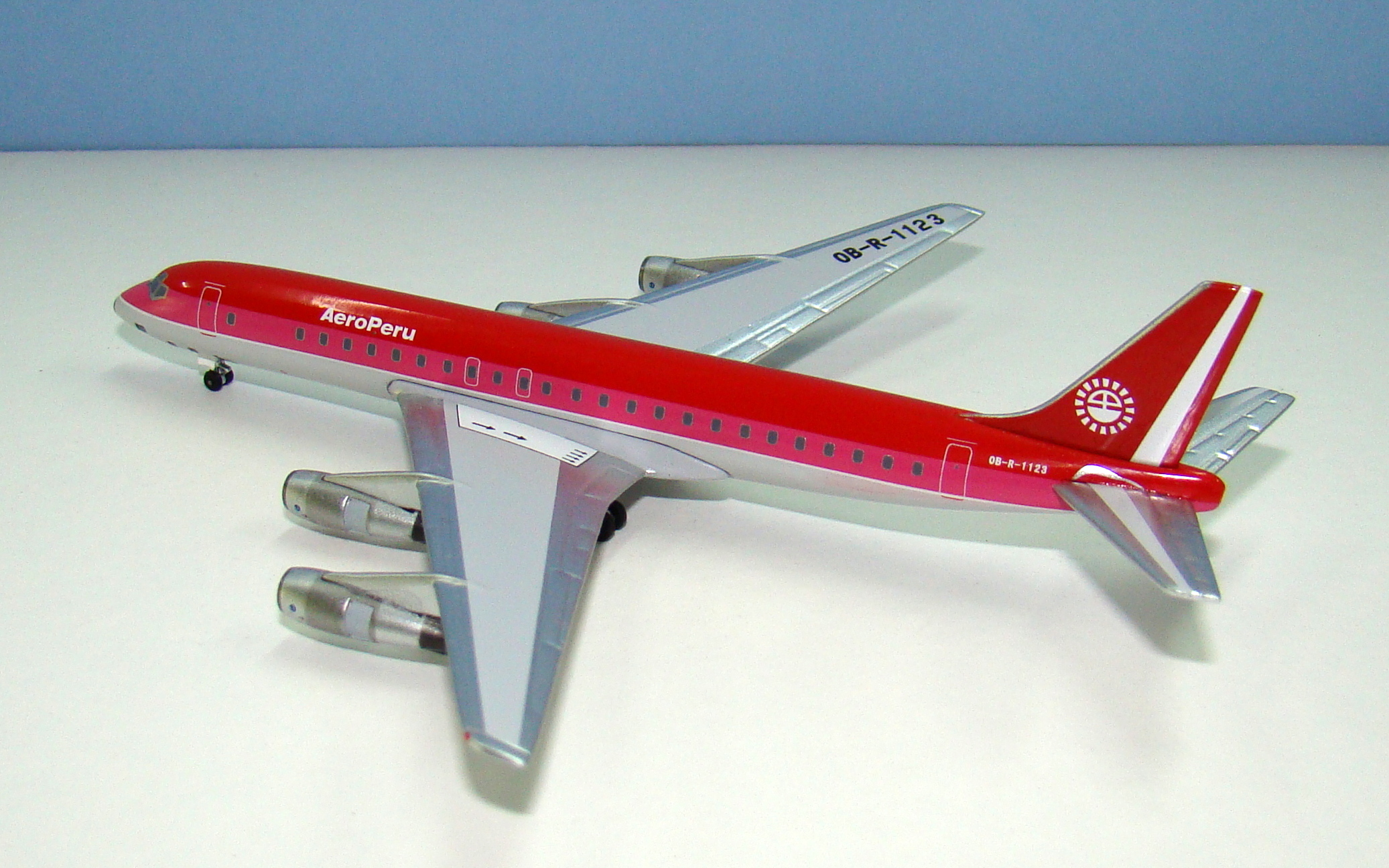 Quality control wise there are no issues. The Aeroclassics DC-8 is rather renowned for sometimes arriving with damaged nosegear due to its fineness and the packaging cradle. That isn’t a problem with mine and all the wheels roll as they should. I’ll take a point off for the overpainting and another for the logo but otherwise the quality is there on this important Aeroclassics release.

Aeroclassics has had some issues recently and the lack of attention to detail does carry over onto this model too, where better research would have highlighted the two tone tail and better skill would have printed the tail logo level. Having said that this is still a great model and let’s face it nobody else is ever going to make these kind of aircraft. If you can find it I highly recommend you get it and I look forward to seeing lots more historic DC-8s in the future.

There seems no limit to what NG Models can do and impressively they have met all the deadlines they have set for themselves whilst at the same time welcoming feedback from collectors. In under a […]