The willingness NG models have shown to make modifications to their moulds and to produce one-off or limited use variations has been unrivalled. You might question the financial sense of this but from a collector’s point of view it is amazing, which is one of the reasons the level of scrutiny that NG Models are getting is often, I find, rather over the top. I guess NG have raised the expectations of collectors so much that they are often now becoming unreasonably high and they expect NG to respond to their every whim. I think we as collectors are lucky and the creation of tricky models like the pair of Court Tristars to NG standards is spectacular. This pair of models showcase not only excellent attention to detail but also yet another mould customization by NG. I couldn’t resist taking a closer look at one of them.

Court Line is famous for a variety of reasons. Firstly, they were trailblazers in the rapidly developing Inclusive Tour charter market. Secondly, their image was famously colourful and thirdly, sadly they famously collapsed leaving tens of thousands of holidaymakers to be repatriated by emergency measures.

The UK has a proud history of independent airlines, who for many years lived under the shadow of the state-owned British European and British Overseas Airways Corporation, scrabbling around to find a viable way of operating. This included limited scheduled operations, charters and trooping flights, but with the Empire rapidly shrinking and BEA/BOAC unwilling to budge on scheduled routes it was charter operations that showed the most promise.

The 1960s saw the rise of the Inclusive Tour (IT) charter, especially to Spain, whereby the holidaymaker’s flights and hotel were combined together. Autair, one of the smaller independent airlines, was taken over in 1965 by the Court Line shipping group and rebranded in 1970. With new pastel shades it was developed into a major charter carrier. Court Line was strongly linked together with Clarkson’s Tours and the relationship grew to the extent that by 1973 70% of Court’s capacity was with Clarksons, carrying nearly more passengers than had flown charters in totality only 5 years earlier.

Court Line’s relationship with Clarkson created stability that allowed it to plan and acquire aircraft more favourably, but was only an asset as long as the tour company was doing well. Clarksons had been losing millions since 1971, and although few tour operators were making money, they were losing far more than their competitors. The economic situation did not look rosy for the mid-70s but Court Line was banking on continued growth and in 1973 became the first European operator of the huge Lockheed L-1011 Tristar.

The Tristars were acquired on lease from Airlease International and had been customized to Court’s specifications with double-width passenger entry doors, internal motorized airstairs and baggage conveyors. The size upgrade from Court’s BAC One-Elevens was massive, with the Tristars seating 357 more passengers each, but Court thought the market would grow and that they could assist it in breaking into cruise holidays. This was woefully optimistic and the OPEC oil crisis of 1973 was the first of several massive blows to the charter holiday scene.

The Tristars were a massive bridge too far but even without them it seems unlikely Court Line would have survived given Clarksons financial state. Forced to acquire its erstwhile partner in 1973 Court Line struggled on but was losing money on every package holiday it booked. Crazily it continued selling holidays right up to its collapse in August 1974.

Court’s pair of Tristars were eventually sold on to Cathay Pacific after several years in storage. G-BAAA became VR-HHV in March 1977 and remained in Hong Kong for twenty years before sale to the Irish charter and sub-lease specialist Aer Turas in January 1997. Over the next year the aircraft served leases with Iberia and Kampuchea Airlines. The last operator was Air Scandic in April 1999 but by November that year a C-check was needed. The aircraft was stored at Abu Dhabi and eventually broken up in 2006. 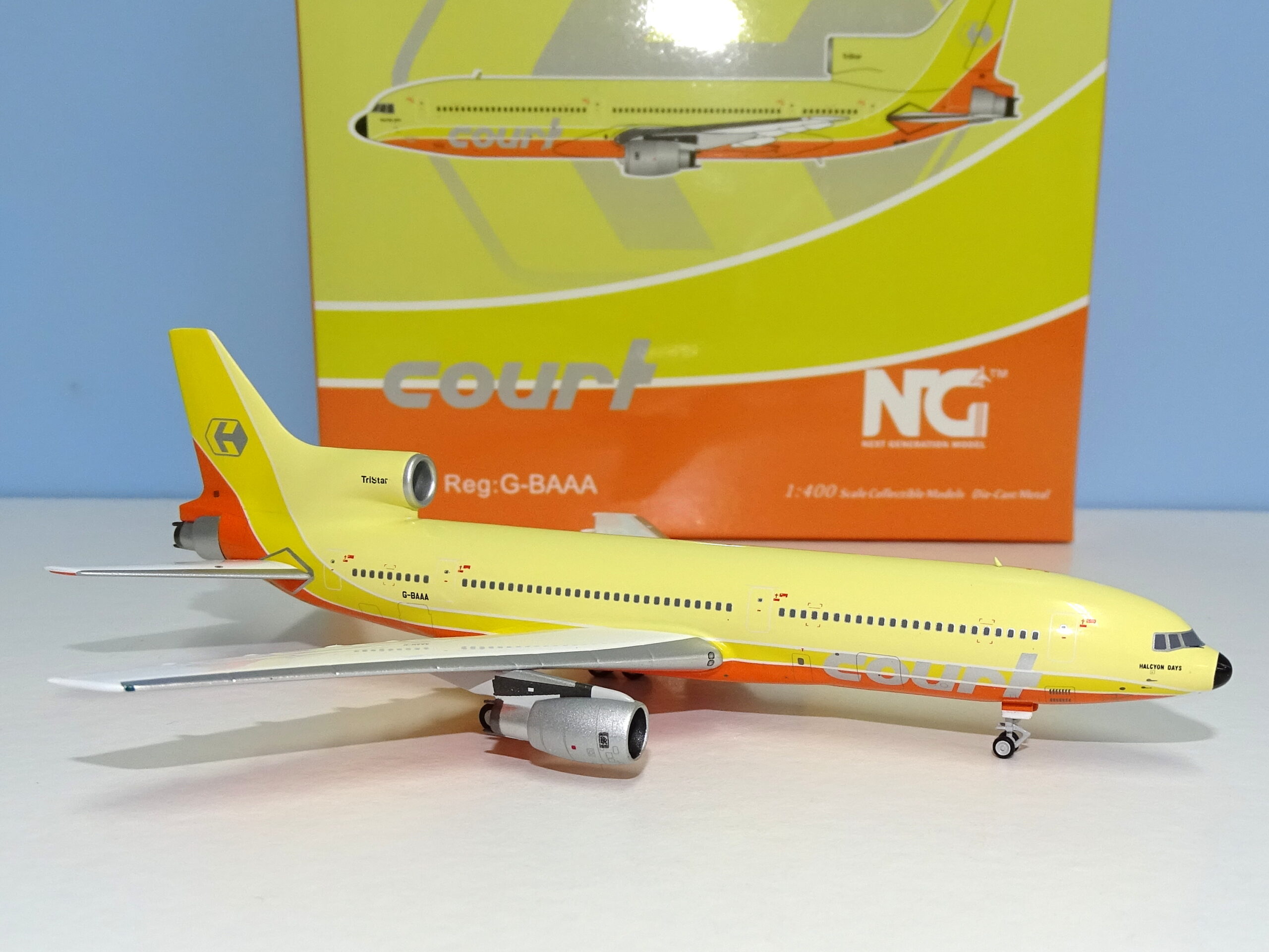 NG Model’s Lockheed L-1011 Tristar rivals their Boeing 757 as the most impressive casting ever produced in 400 scale. It is miles ahead of the many previous Tristar moulds and certainly a vast improvement on both the old 1999 Gemini Jets version and the 2005 Blue Box version, both of which have been used to produce a version of this aircraft before.

As soon as I saw the prototypes, way back last April, I knew it was going to be great and generally my detailed review of the sample models still stands. The NG Models Tristar is the first Tristar mould to accurately portray the dolphin like nosecone of the type. Nobody else has come close to this level of accuracy, which is evident throughout the entire mould. Nowhere is this clearer than at the tail region, which is beautiful. 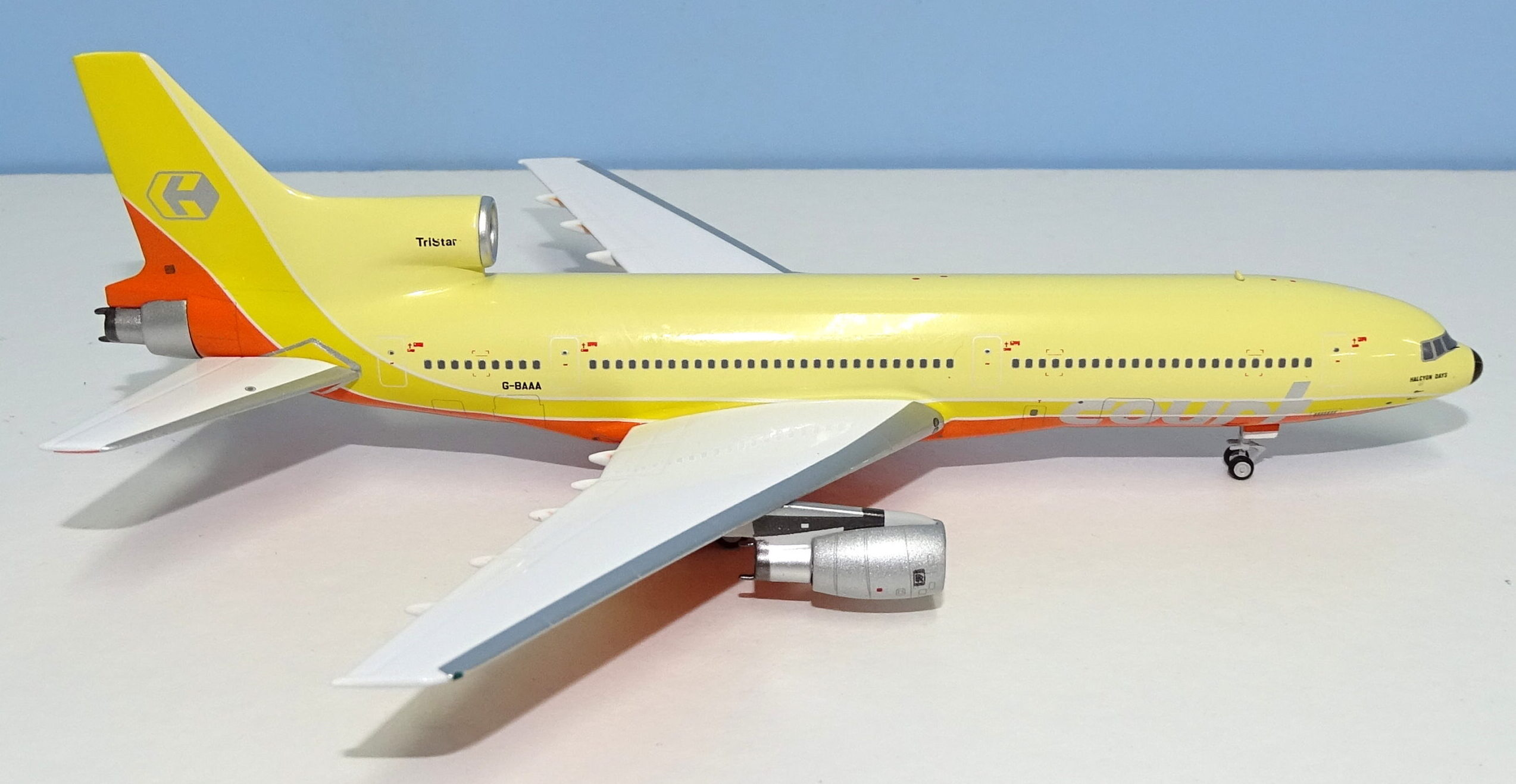 The wings are well angled and very well detailed as is the wing/fuselage join and fairing. The engine pylons were an area modified prior to the first production release and look excellent. Of course, there has until recently always been room for improvement. The criticism that has been made of the mould has mainly been towards the angle of the engine intakes, which should slant rearwards on the no 1 and 3 engines. This has recently been fixed leaving the only area of possible inaccuracy being around the maingear doors. It is certainly not enough to cause any dropping of points.

The major change with this pair of Tristars is not related to the undercarriage however, which in general is fine and beautifully detailed, but at the engines. This Tristar is equipped with the earliest Rolls-Royce RB211-22B engine version. This version had both cascade vanes and clamshell reversers. The clamshell reversers deployed directly into the engine exhaust stream but proved unreliable and were removed. This allowed a redesign of the engine afterbody, deleting the two spiky bits, which actually decreased drag to. NG have replicated the original clamshell design of the engines. This is the sort of detail no other manufacturer would historically have bothered with getting right.

The modifications made to the mould elevate this back to a 10 comfortably.

The Court Line livery has the 1970s written all over it with its pastel shades. There were four Halcyon Skies livery combinations and as they only had two L-1011s only two made it to the Tristars. G-BAAA wore the yellow/gold/orange version and G-BAAB the pink/rose/magenta. The entire fuselage, wings and stabilisers were painted with the only natural metal remaining being on the wing’s leading edges. 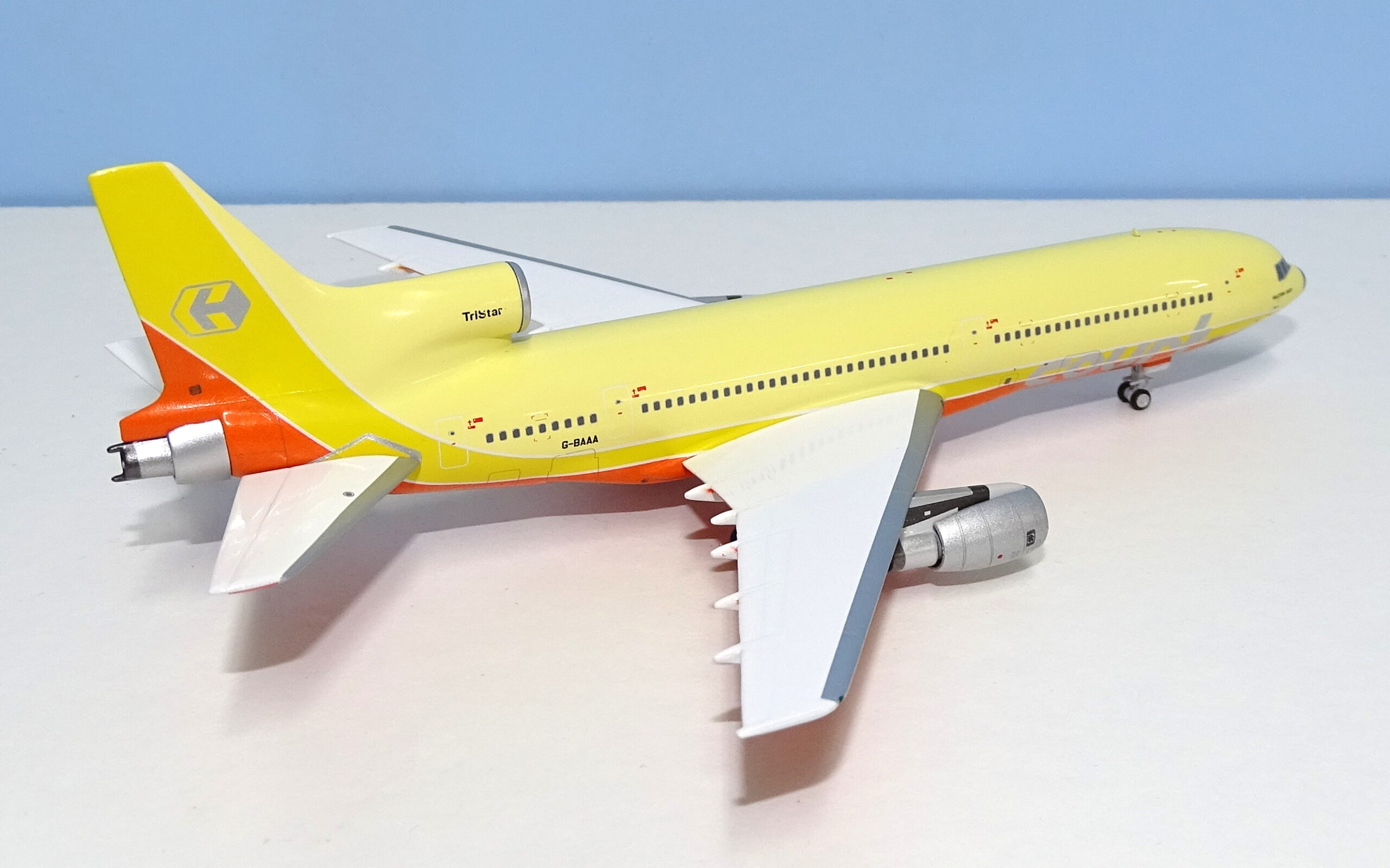 When Gemini made this aircraft, which was admittedly an age ago, they made something of a mess of the livery application since they painted both the wing and horizontal stabilisers yellow when they ought to have been white. The yellow they used, were also way too bright. Jet-X using the Blue Box mould did a much better job but that version is incredibly rare as only 120 units were made back in 2007. NG of course get the wing colours correct. 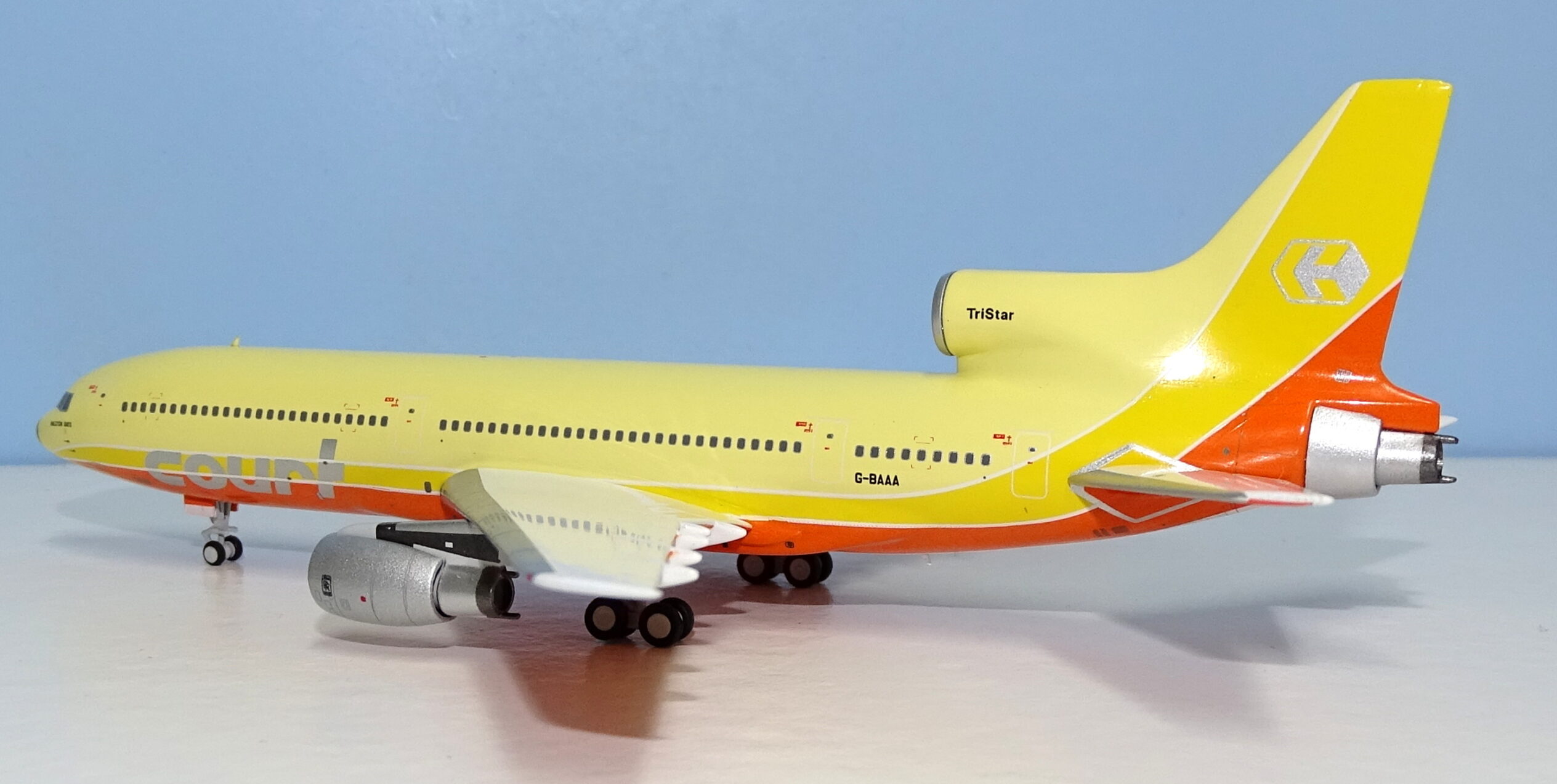 NG have done a great job with the fuselage colours. The yellow is a bright pastel shade as it should be and the gold and orange look good too. The orange is possibly on the light side but I think within the tolerances of the photos I’m seeing. One criticism I do have is that the thin white pinstripes demarcating each colour change do not stand out as much as they do in all the images I’m seeing. They are present on the model but tend to blend into the main colours.

This is a complex livery to get spot on due not just to the colours but the combination of elements. That is almost never an issue with NG Models and once again it isn’t here. The silver titles and tail logo are reproduced perfectly. The aircraft name ‘HALCYON DAYS’ is correctly present on both sides of the nose also.

It is at the nose that another minor error has crept in. The Court Tristars had very large snoopy style black nosecones, which almost reached the cockpit. I do think that the nosecone on the model is too small but a mm or so. All in all this is a creditable representation of a challenging livery. 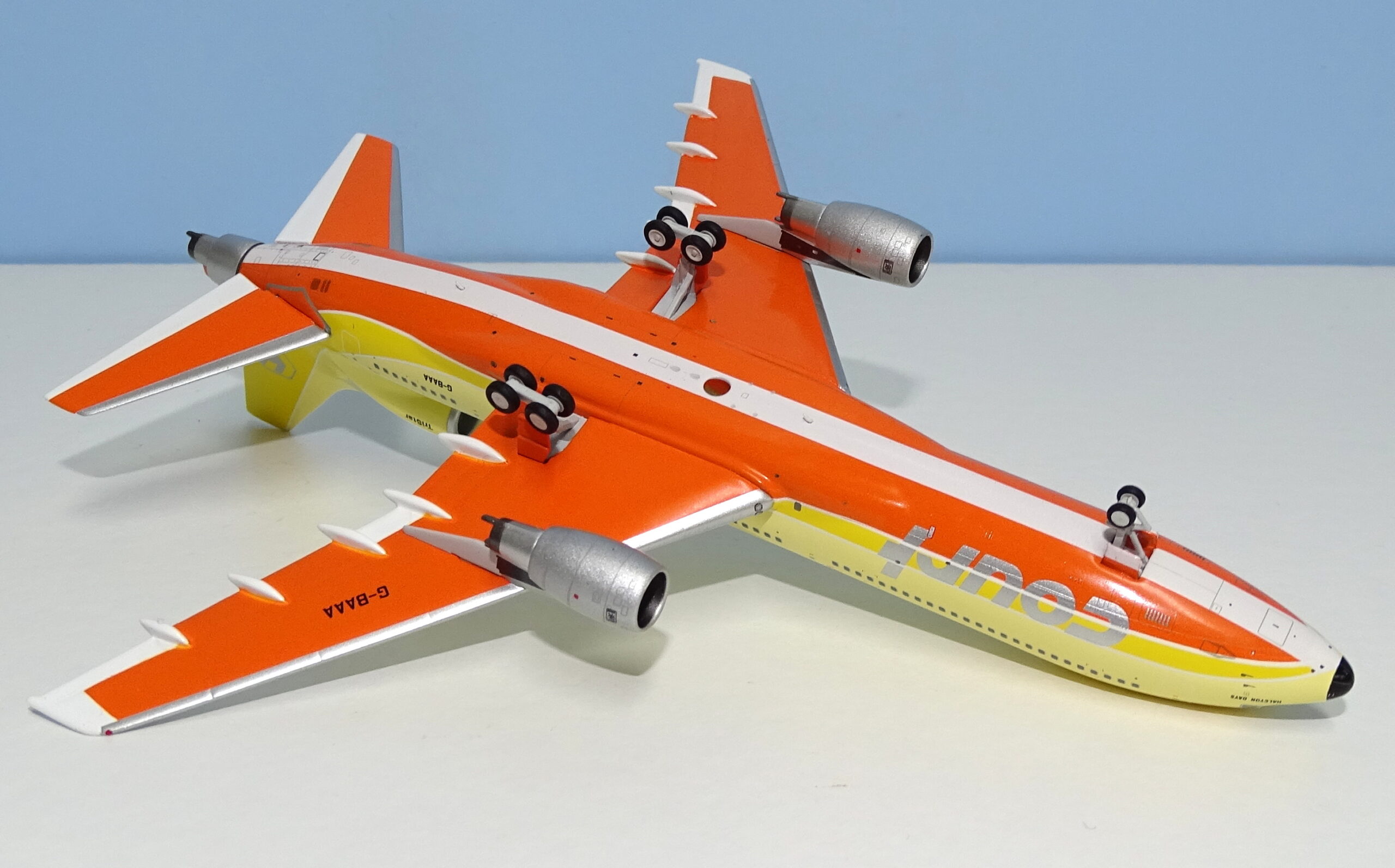 I have waxed lyrical about NG’s printing standards many times and as usual the underside of the model is the acid test. On this model not only do you get a huge amount of line detailing but obviously also the belly striping. As several collectors have noted you almost want to display the model upside down!

There is only a single point of quality concern with the printing and that is with my copy the S of TriStar on the starboard side engine is missing the top of the letter.

Annoyingly the wheel rims continue to be a major bugbear with NG Tristars as once again only half of them have proper hubs. More annoyingly these are all the inner maingear wheels and not the outer ones, where you notice it more. Equally only one side of the nosegear has the correct hub detailing. Yes, it is minor in the grand scheme of things but it is a consistent failure that is easily rectificable.

I have purchased both of the Court Tristars NG has made and I have to say they are close to being my favourite models of the year so it is a little annoying that they drop four points for a relatively low score by NG standards. Nevertheless, the general quality and detail NG is putting into these L-1011s is magnificent and I particularly like the new engine look. Hopefully NG can rectify the issues it is having with producing bare metal Tristars soon as there are plenty of silver belly L-1011s I long to see made on this gem of a moulding.

Flying Beyond: Hong Kong Airlines Airbus A350-941 B-LGA by Phoenix

Nowadays the HNA Group appears to be everywhere. It was only formed in 2000 as a holding company for the, at the time, small carrier Hainan Airlines but is now one of the largest companies […]