Panda Models have themselves talked of production difficulties in 2019/2020 and although it is hard to say what has happened it is clear that the company is not the same one as it was up to mid-2018. Ironically since then it has become more widely recognised outside of China since its models are now sold at conventional retailers and it is producing more non-Chinese models. Unfortunately, the other side of this is that it is producing far fewer releases than before and they are not appearing to a reliable schedule. One avenue that has apparently remained open to them is producing models for individual customers and just last month Airshop Diecast of Indonesia began to sell a pair of Batik Air A320s exclusively made for them. I’ll take a look at one here. 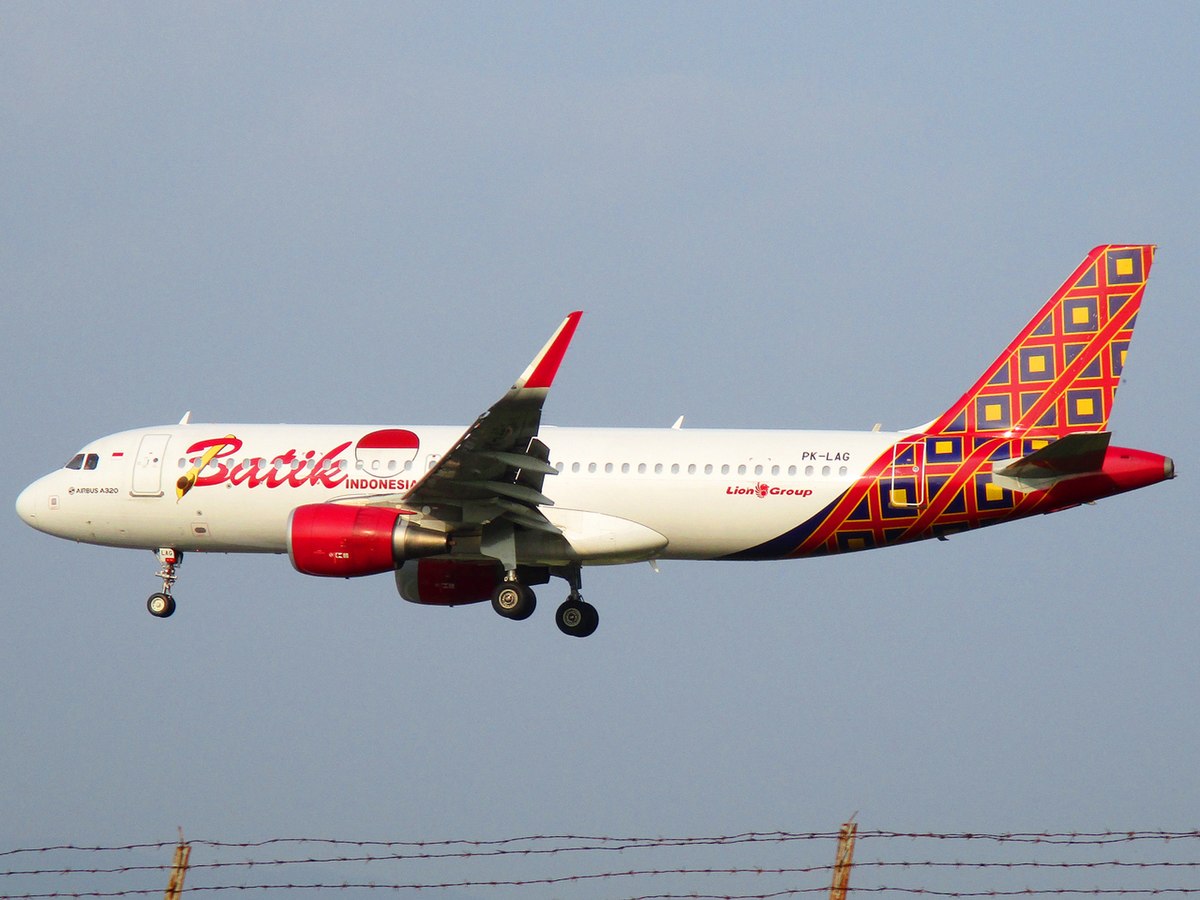 The Indonesian airline market has had a tumultuous ride over the past 20 years featuring major safety issues, an EU blacklisting and a whole raft of start-up airlines. The upheavals have largely settled during the last decade although it is still hardly the safest place to fly. Partly the improvements have been driven by the failure of most of the worst run airlines and the consolidation of the domestic and international market around 4 major airline groupings. The four groupings are Garuda Indonesia, Lion Air, AirAsia and Sriwijaya Air.

Each of the groupings aside from, Indonesia AirAsia, operate multiple brands to cater to different markets. These typically feature feeder, low-cost, and medium-high market airline brands. For Garuda it has Explore, Citilink and Garuda Indonesia respectively. Sriwijaya Air has NAM Air as its feeder and no low-cost arm. Lion Air Group has Wings Air, Lion Air and occupying the premium end of the market is Batik Air.

Batik Air began operations in May 2013 initially utilising Lion Air’s two class 737-900ERs but it has since grown its fleet mainly with Airbus products. Unlike Lion Air it provides in-flight entertainment, snacks and meals, free baggage allowance and better seat pitches onboard. Initial expansion focused on shorter domestic routes but the airline has branched out to international destinations such as Chennai, Bangkok and Taipei.

Growth at Batik has been quick and pre-Covid it was operating 64 aircraft with several hundred more on order. More than two thirds of the fleet (44 aircraft) were Airbus A320s configured in a two-class, 12 business and 144 economy seat, layout. The first A320neo was accepted in February 2020 but Covid has put paid to any further neos deliveries for the time being.

PK-LUK is a fairly standard A320-214 delivered on November 25, 2016, one of 15 A320s delivered new to the airline in that year. Prior to Covid the Indonesian market was booming and was already the 5th largest domestic market in the world. Backed by the successful Lion Air Group it is hard to see how Batik will not come out of the other side of the Covid crisis strong enough to continue to battle it out with Garuda for the top-end of the market. 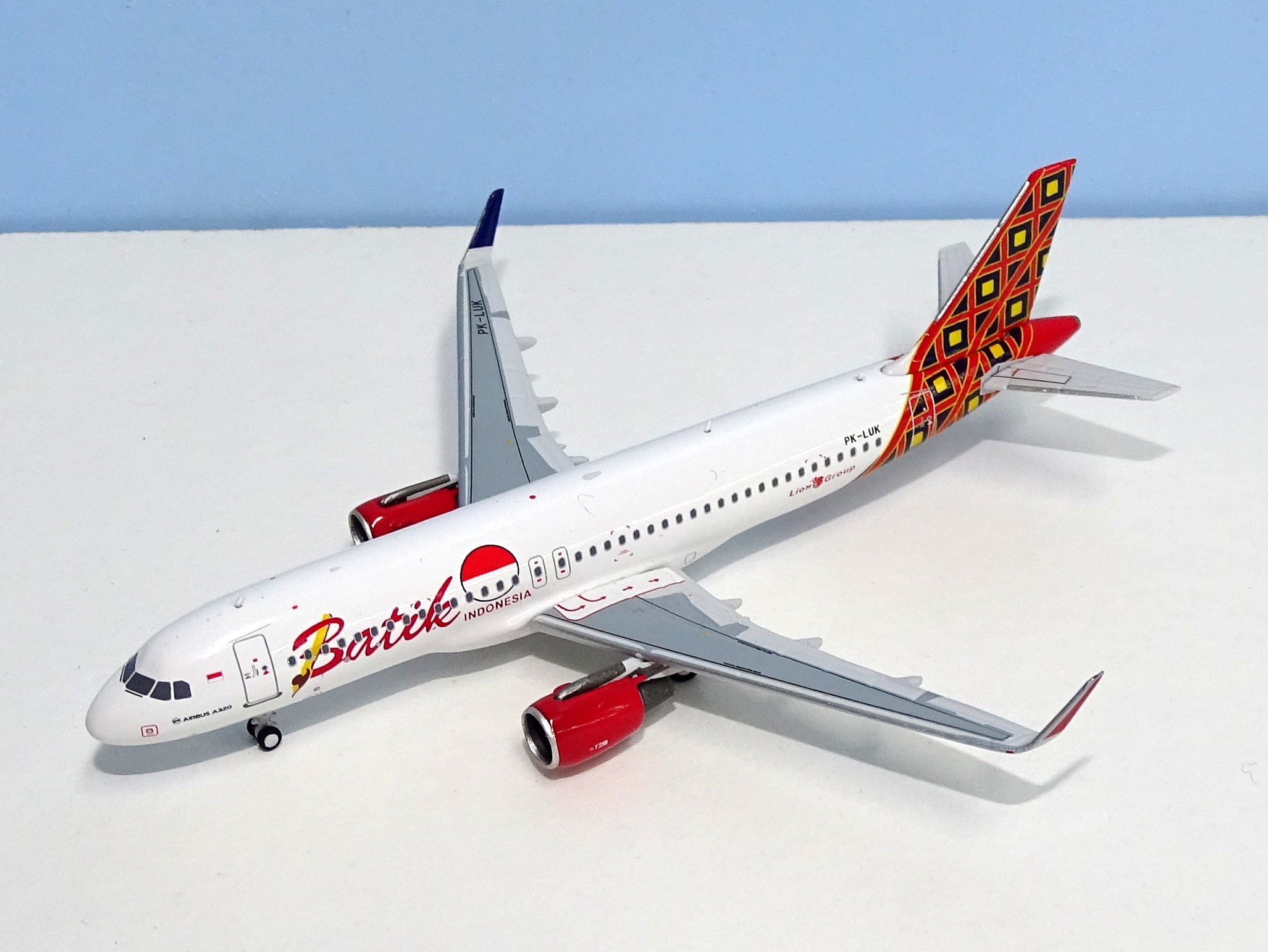 There is little doubt that the Panda Models A320 owes its heritage to the Aeroclassics version, however Panda has improved the mould slightly in a way that Aeroclassics is unable and unwilling to do.

Since Aeroclassics already had the best A320 it goes without saying that the Panda mould is very good and easily the best in 400 scale. The fuselage shape is essentially perfect and leaves the A320s from Phoenix and JC Wings in the dust.The wings are also excellent and slot into the fuselage very well with no discernable gap and no wing angle issues. 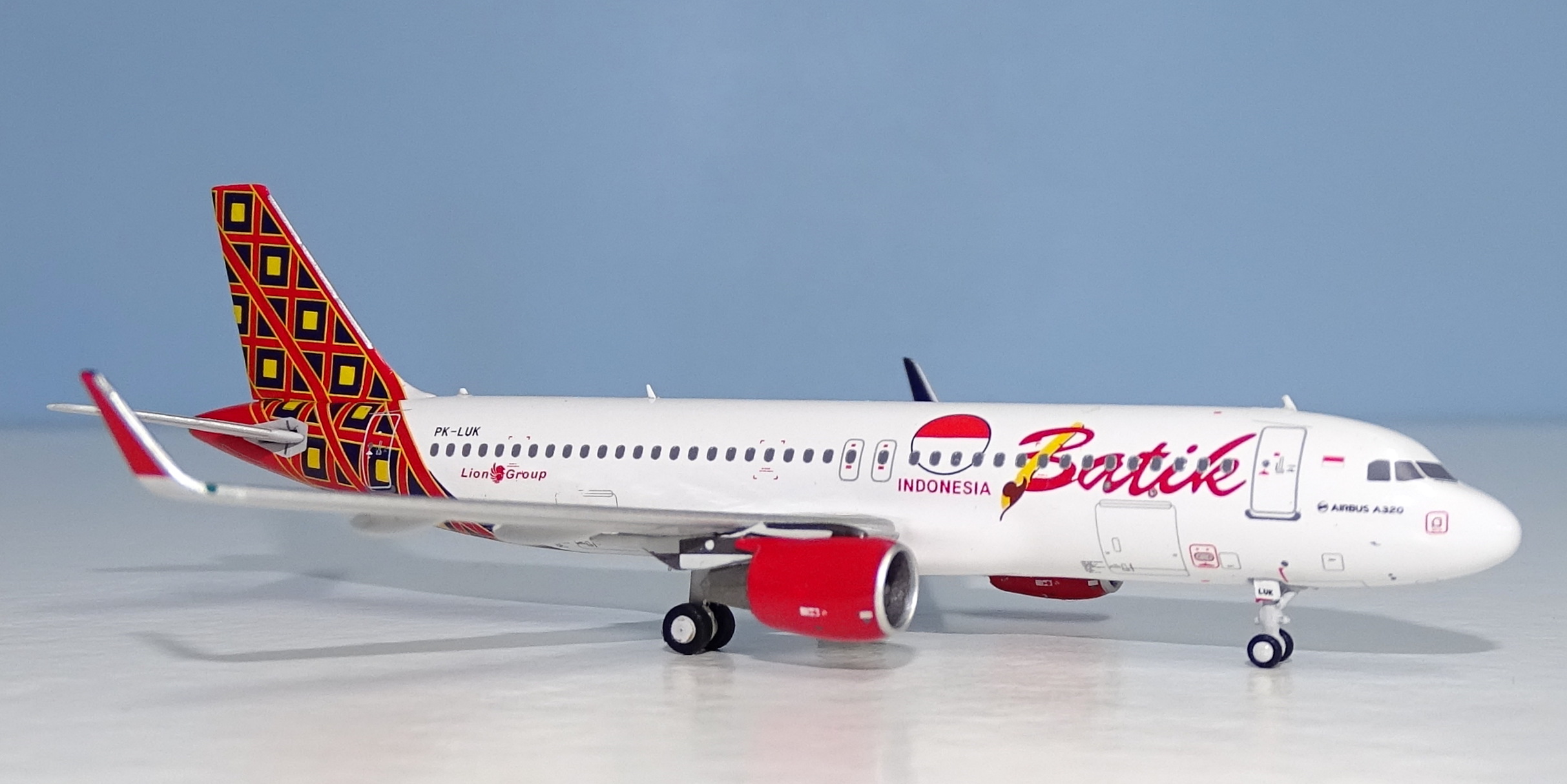 One of the improvements added are aerials. Unlike JC Wings, which often makes the antennae too large, Panda have got the size correct and in addition they have fitted on this mould all four of them, unlike JC Wings, which regularly misses out the rear under fuselage antenna. 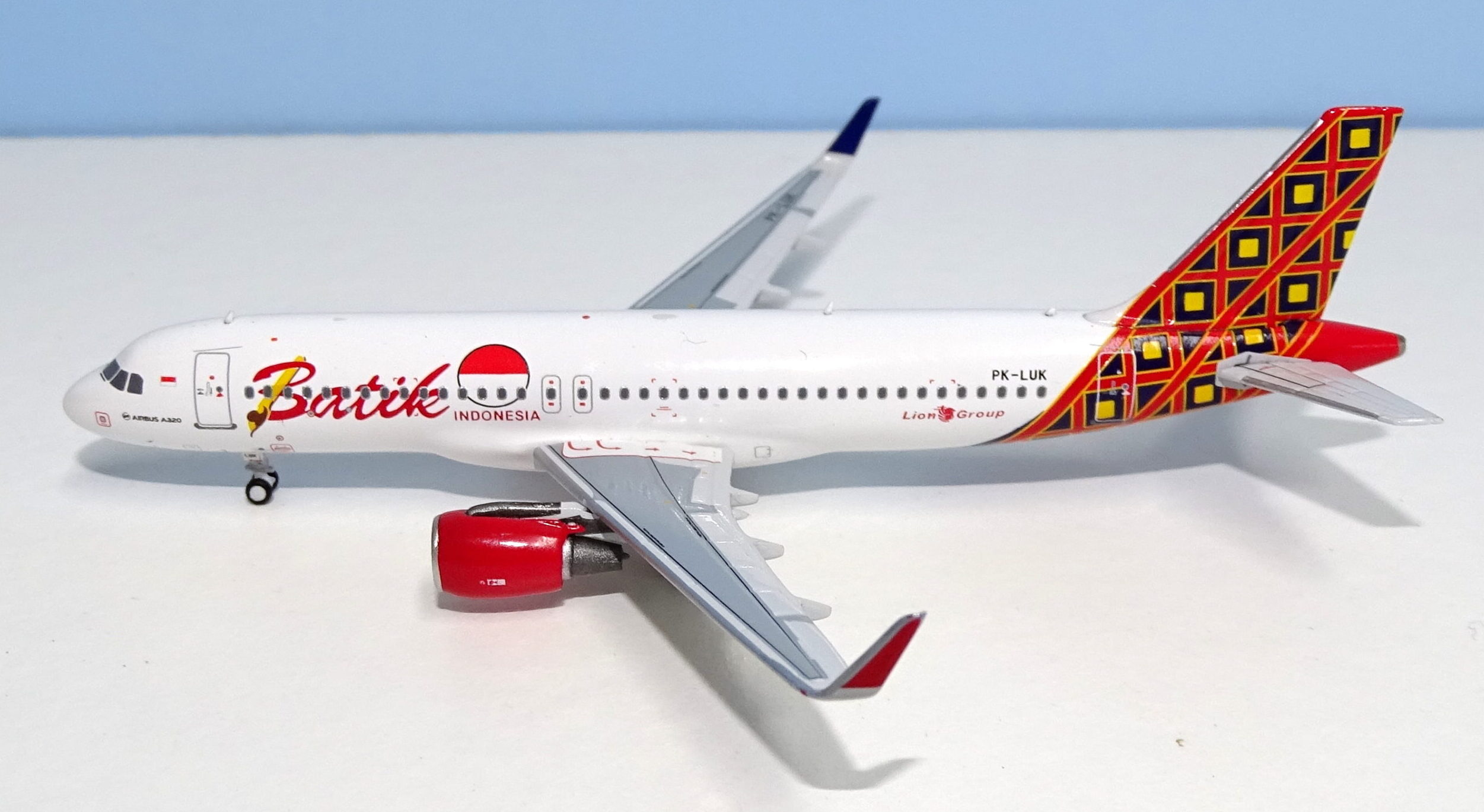 The nosegear with a nice tyre-hub is a major improvement over the original rubber tyres on a spigot. Aeroclassics have also recently updated the tyres of their A320 family models but although larger it remains the old simple construction. Not only have Panda got a better sized tyre (slightly smaller than the new Aeroclassics one) but they also have nice hubs. 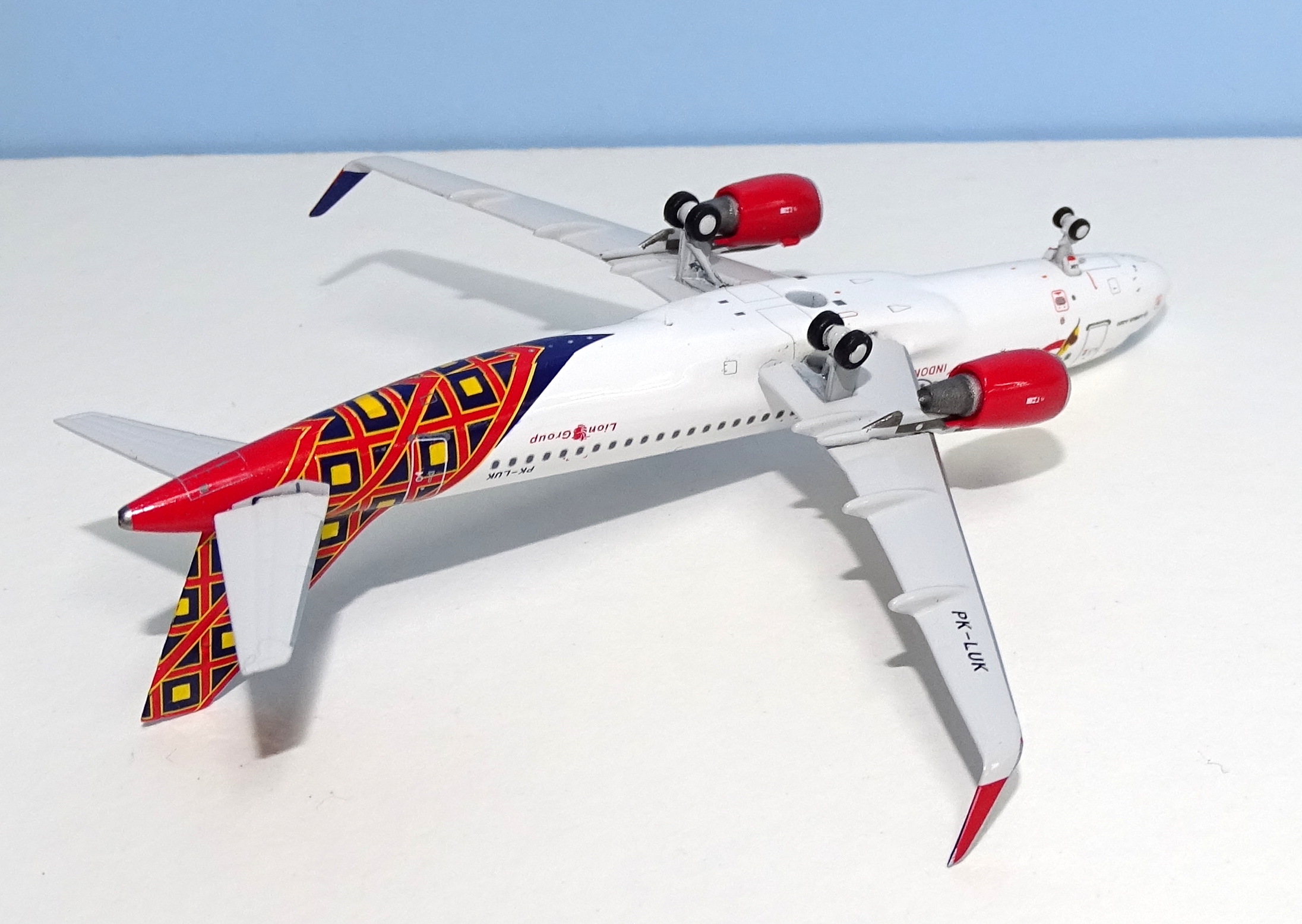 Another problem area for competing A320 moulds is the size of the engines (it is often getting silly on the NEO variants). On this A320ceo they are still CFM56s but the Panda version are well sized and hung from the wings. The engines are solid core, unlike on the Phoenix A320, but this is hardly an issue considering the other virtues of the mould. 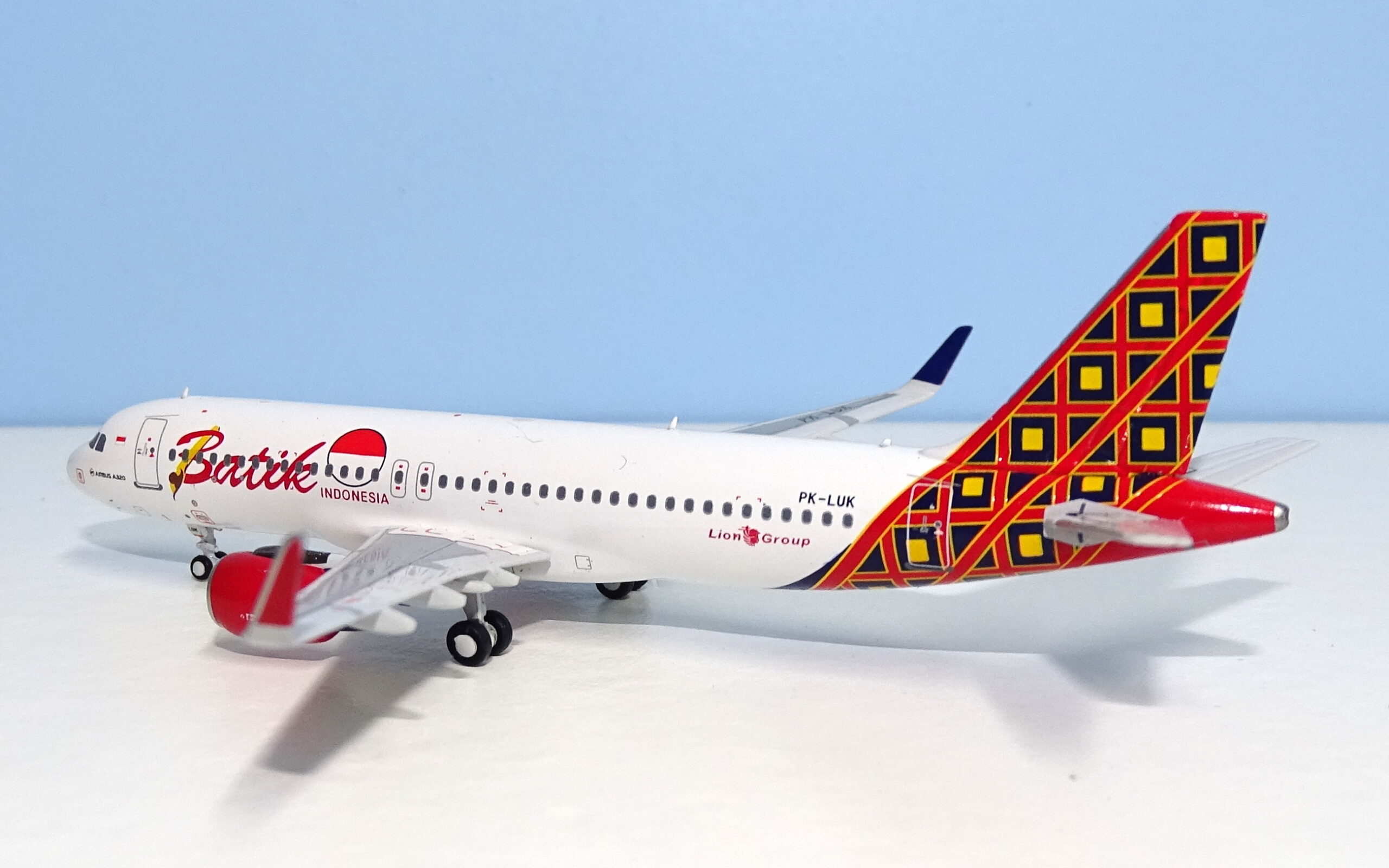 This is a near perfect A320. The updates to the original mould have been made skilfully and the mould has no real weaknesses.

Batik Air has an attractive livery in keeping with the relatively minimalist approach that many airlines utilise nowadays. The airline’s name derives from the local name for a dyed-pattern cloth and it is that cloth pattern that adorns the tail. The patterning has been somewhat simplified on the A320s compared to the earlier 737s and now has a much simpler geometric pattern. 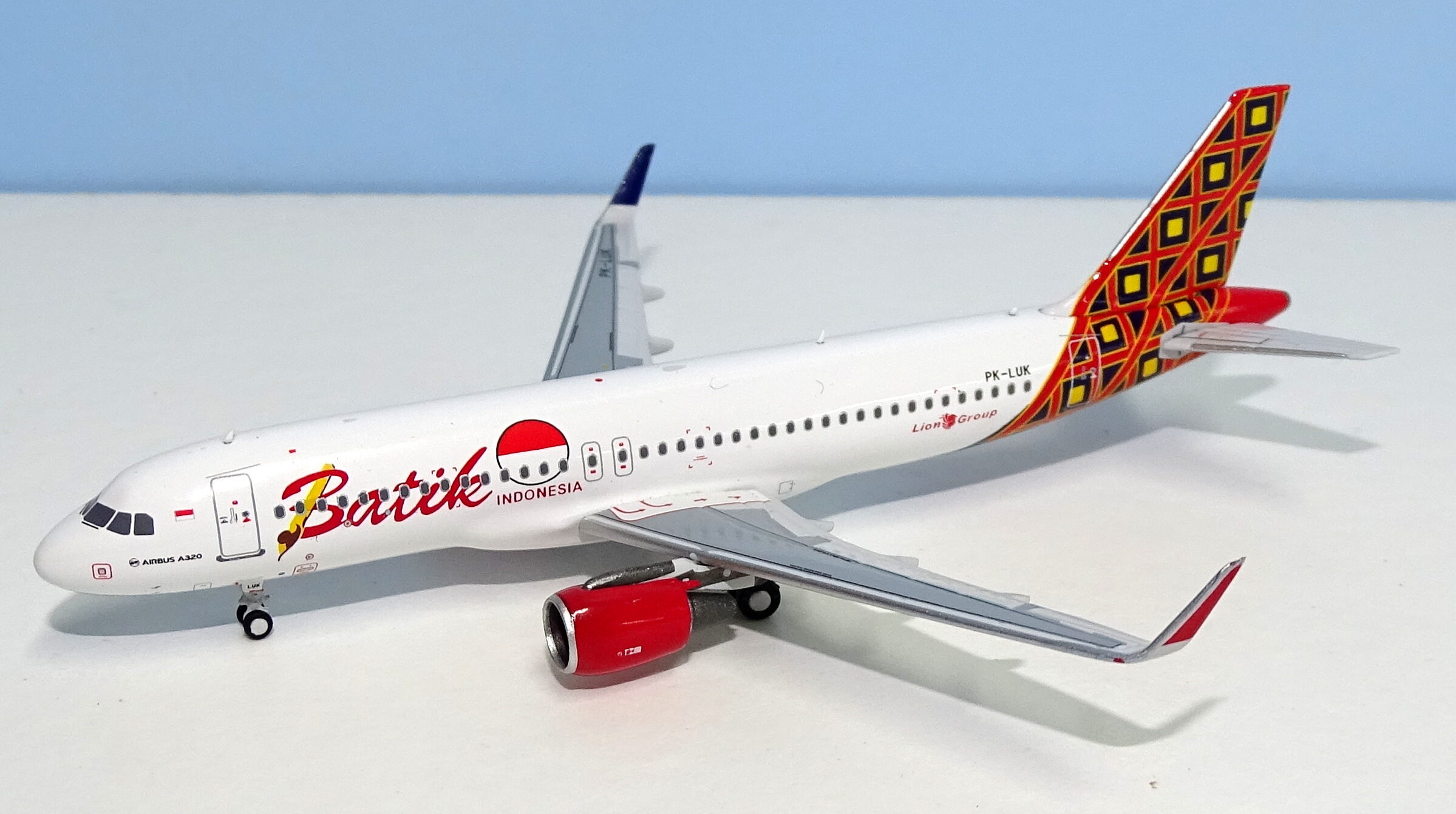 The other major feature is the B of Batik which consists of a canting, a pen-like tool used to apply liquid hot wax in the batik-making process. Some time between June 2017 and January 2018 this individual frame also gained a large circular representation of the Indonesian flag. 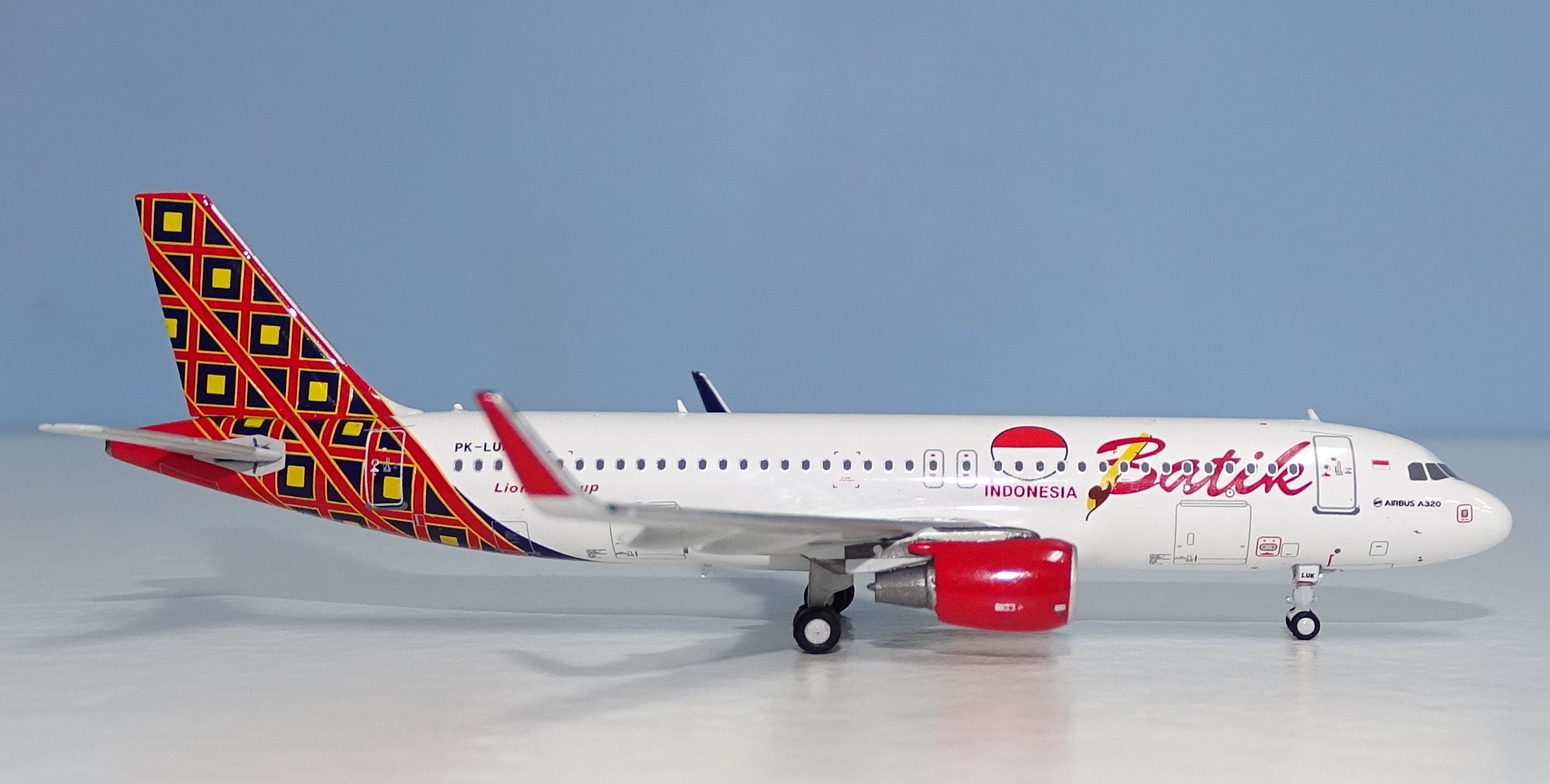 The livery colours are simple – red, yellow and dark blue. The shades are bright and simple giving Panda no troubles in reproducing them on the model. The tail patterning consists of squares overlaid with three stripes, each outlined in yellow. The shape and placement of the Batik pattern is excellent. The correct number of squares are present and they are all in the right place.

Likewise, I can see nothing to complain about with the tricky stylised main titles or the large Indonesia flag aft of them. Smaller details such as the Lion Group logo, aircraft type titles, LUK on the nosegear doors and Indonesian flag aft of the cockpit are all present and correct. I can’t fault the application of the scheme itself. 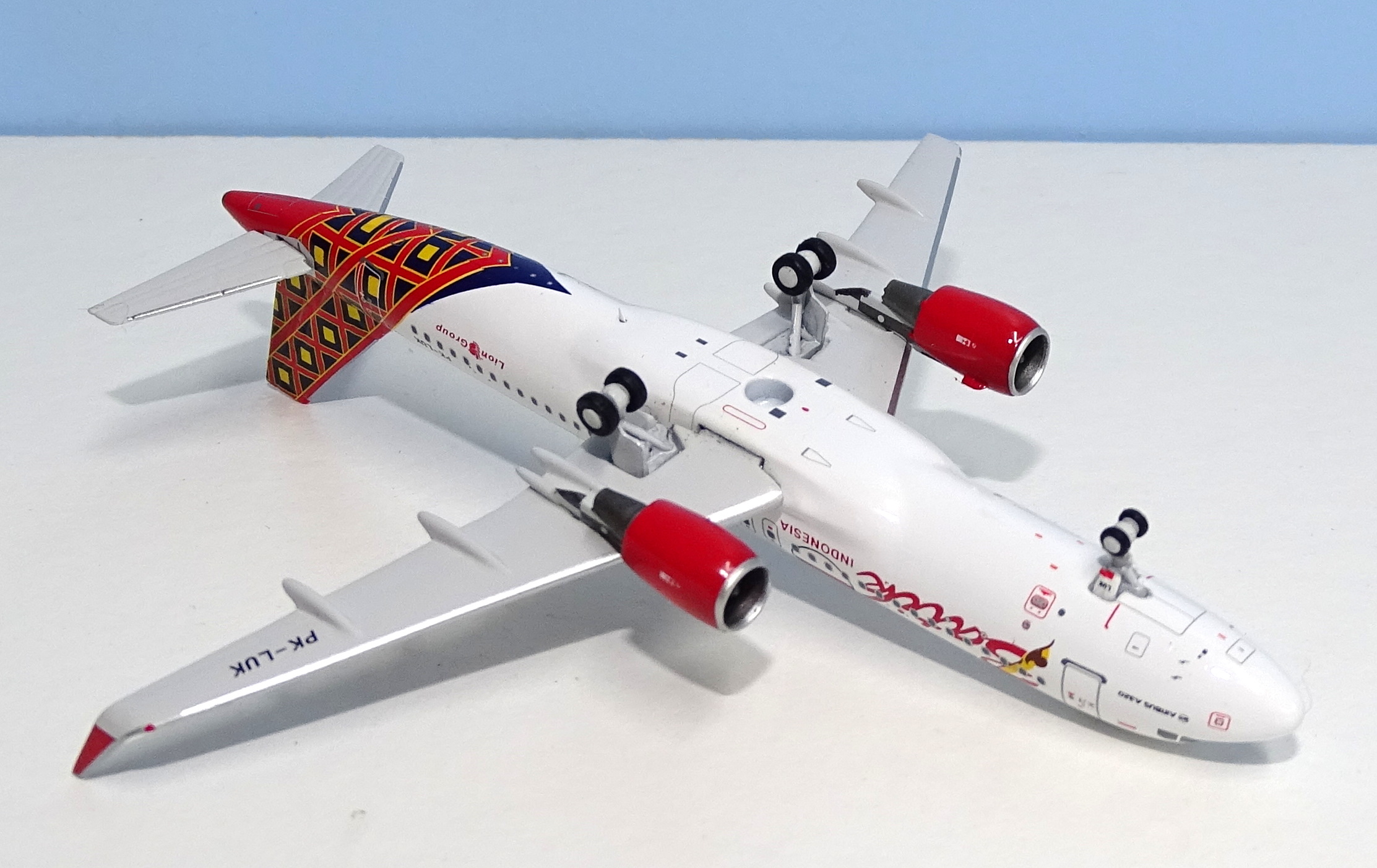 Printing on Panda Models is generally of a high standard although some finer lines, such as thenose radome, are omitted there is a lot of detailing elsewhere, especially under the nose, by the nosegear. There are no printing defects and in addition the engine fans are a lovely dark shade of titanium grey. All the paint is crisp and fine.

Unfortunately, the otherwise exemplary finish and mould of this release is slightly marred by the printing of the cockpit windows. This is a feature that can have a really adverse effect on a model to the point of ruining it. Phoenix has often made a dog’s breakfast of cockpit printing, especially on its 737s and 777s but this is the first time I have seen sloppiness of that kind from Panda. It is mitigated somewhat by the windows at least being the correct shape (unlike the Phoenix fails) but there is no getting away from the fact that the cockpit is not printed level and on the port side of the model the windows are lower than on the starboard. This means that the model looks better from the right rather than the left.

Construction of the model is good. All the aerials are well attached and the main landing gear properly rolls well. The nosegear does not roll for some reason, not that I care.

I have just started collecting Indonesian airliners and the appearance of this model is opportune as it means I don’t have to worry about the Phoenix version of a Batik A320. The model would be perfect if it weren’t for the cockpit printing angle so that is a shame. As it is the fault is not crippling to the eye but nonetheless it is noticeable. Also noticeable is the enterprise of Indonesian retailers like Airshop Diecast who are proving far more adventurous recently than Western retailers when it comes to making models for their local markets.

1:400 scale has been a hotbed of innovation in recent years, which has been a joy to behold. There has been Phoenix with spinning fanblades, JC Wings with flaps down, AV400 with beacon lights and […]