JC Wings continue to be a company that struggle to communicate their releases and get them out to the market in sensible timeframes, however they have shown commendable willingness to improve. Firstly, they have started an active Instagram presence enabling collectors to communicate with them directly and secondly, they have been incrementally improving their moulds and models in service of themselves, and at least sometimes, their partner Gemini Jets. Even so, often it is still a case of blink and you’ll miss their releases, which tend to appear sometimes more than a year after the original announcement and then sell out quickly. This HK Express release is unbranded, presumably due to the budget carrier’s new association with Cathay Pacific but is clearly from the JC stable.

HK Express has had a tumultuous existence, in keeping with any airline trying to grow at the Hong Kong hub of one-time rival Cathay Pacific. Originally a premium airline flying Embraer E-Jets it was soon absorbed into the HNA Group along with what would become Hong Kong Airlines. In October 2013 the airline was rebranded as HK Express and replaced its Boeing 737-800s with new Airbus A320s.

While Hong Kong Airlines aimed for the full-service market HK Express targeted the low-cost arena. As such it increased the density of seating in its aircraft and cut costs. With slot restrictions at its Chep Lap Kok base it also searched for larger aircraft and on October 29, 2016 the first of 13 230-seater Airbus A321s joined. Subsequently A320neos have also been added, cramming in 188 seats compared to the 180 in its A320ceos. HK Express also joined up with the HNA Group inspired low-cost U-FLY Alliance in 2016 and was a significant challenge to Cathay.

Cathay Pacific has a history of swallowing up competitors and aggressively protecting its Hong Kong hub. With HK Express’ parent, the HNA Group, desperately short of cash it was not too surprising that Cathay became interested in the budget carrier in 2019. The deal was completed in July 2019 at a cost of HK$4.93 billion (USD632 million) and HK Express is now a subsidiary of the Cathay Group.

In hindsight the deal to acquire HK Express may be one that Cathay now regrets given the double whammy of Hong Kong’s political problems and Covid. HK Express was forced to cancel all its flights between March 23 and July 16, 2020. Even in late September it was only operating one route – from Hong Kong – Taichung twice weekly!

It remains to be seen whether HK Express can survive, but the Cathay Group has said it still sees a good future for the unit. B-LEJ is an A321, which was delivered on March 21, 2018 wearing special Reward-U colours to celebrate the airline’s frequent flyer programme. With the takeover by Cathay Reward-U ended on December 31, 2019 and was replaced by the Cathay Group’s Asia Miles benefit programme. The carrier is also in the process of leaving HNA Group’s U-FLY Alliance. This airframe remains in its Reward-U colours but is in storage, along with much of the rest of the HK Express fleet, at Alice Springs. 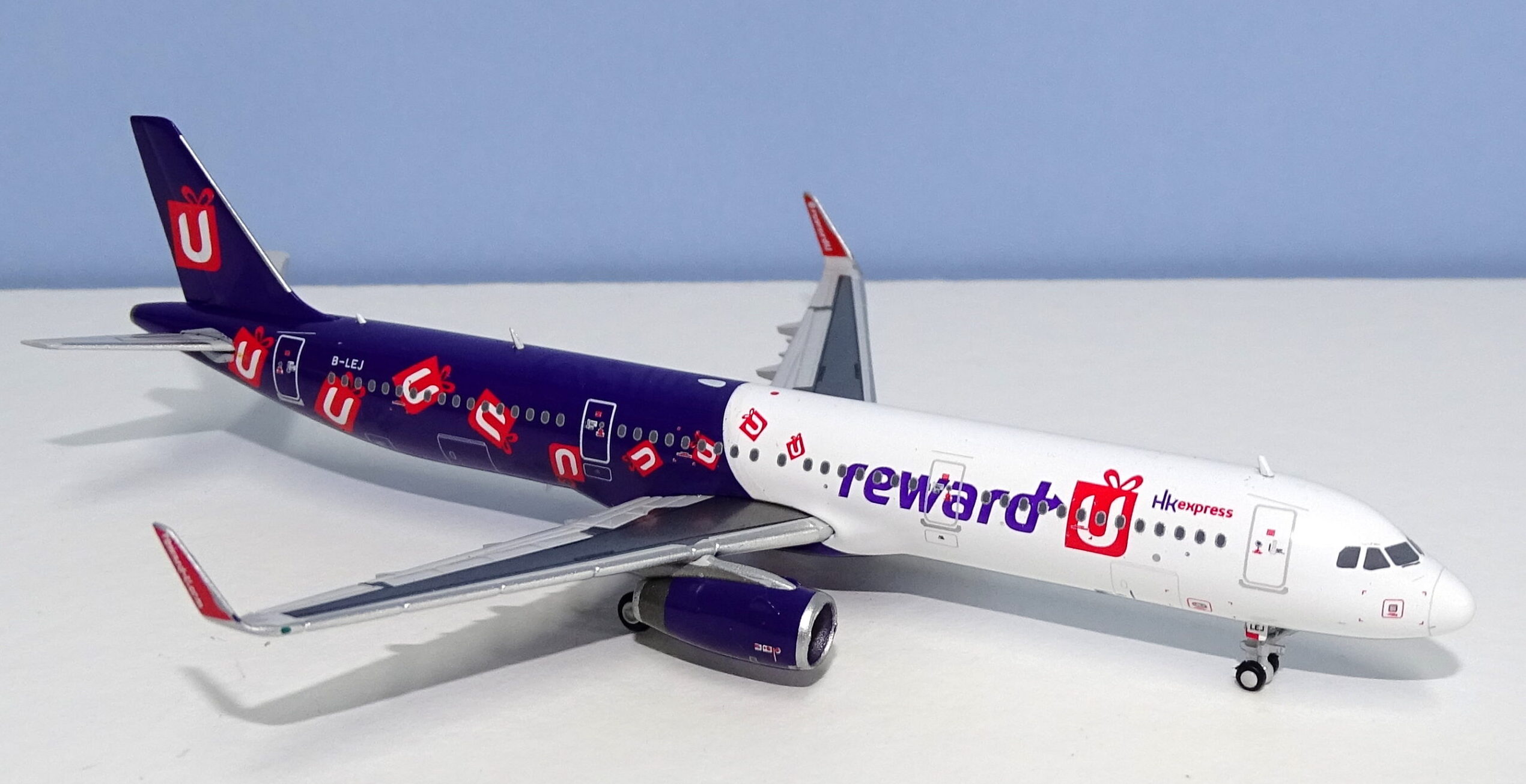 JC Wings introduced a new A320 family moulding set for the A320ceo, A320neo and A321 (with the A319 arriving later) back in 2016 to replace the previous cradle mount casting that was getting some flak. This meant that all three types shared the same features across the majority of the mould for better or worse. Initially this was a bit of better and quite a lot of worse, but JC Wings has incrementally improved the moulding in the past year or two. The result is a decent effort.

The fuselage shape is an area that JC Wings have been improving gradually. Earlier versions had a tailcone that was too short and thick but this appears to have been modified and is now a better length and shape. The nose and cockpit region are ok but I’m not 100% convinced by the shape of the nosecone and the angle up to the cockpit is not steep enough. Nonetheless, it looks better than many earlier JC A320s.

Another area of criticism has been the nosegear. The gearleg is a little chunky and perhaps marginally too short, however again this is an area where improvements have been made. The earlier nosegear doors, which were way too large, have been significantly reduced in size. The result is a more balanced and appropriate nosegear.

This A321 is fitted with the long thin IAE V2533 engines and so doesn’t have the same issues that have bedevilled CFM fitted versions and NEOs, where the engines have been too large. On the whole I’d say the engines look good and hang well from the pylons. This model also features four of the five aerials and includes the rear underside aerial that is often ignored by JC and Gemini. 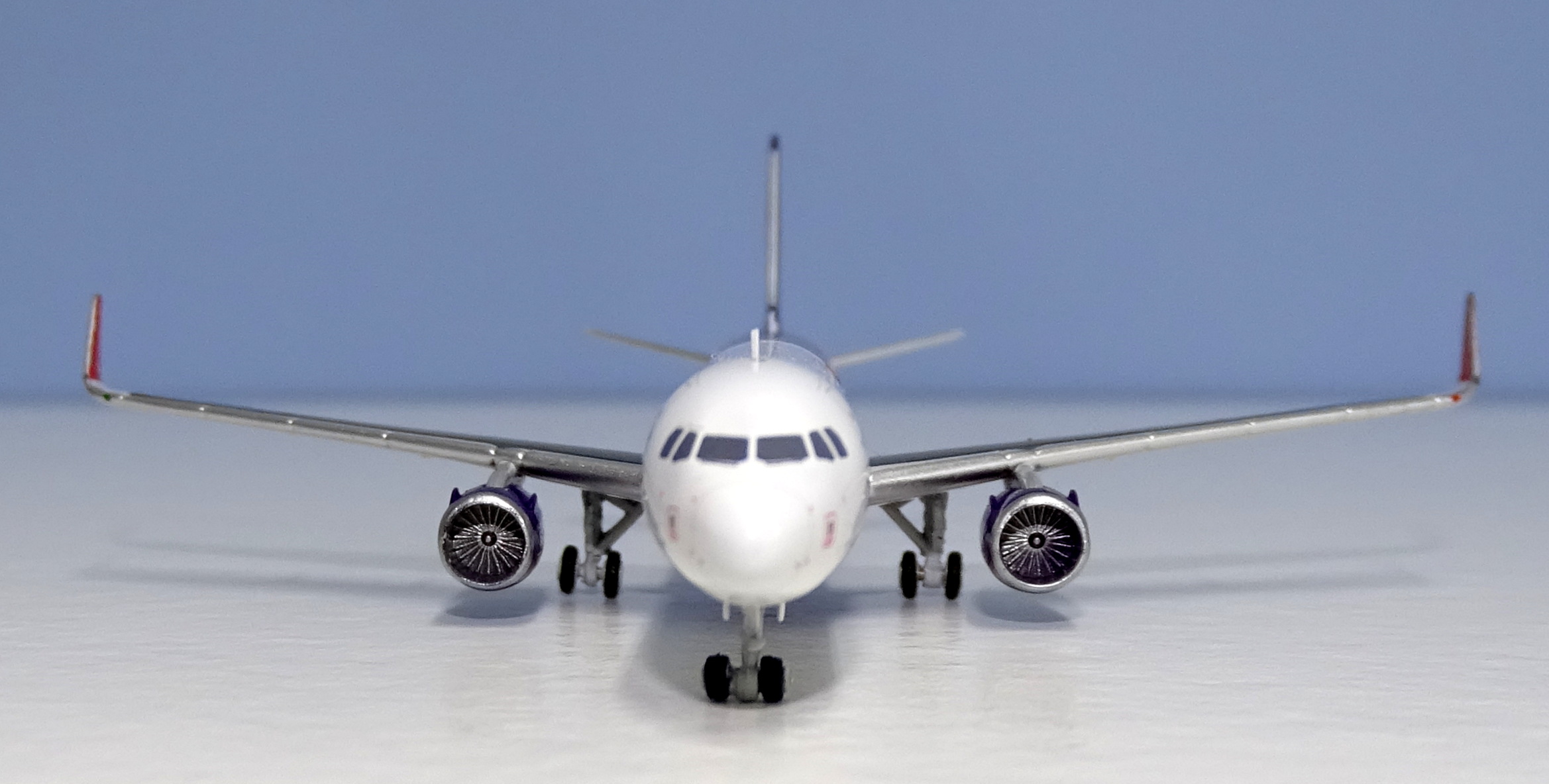 One of the best points about the JC Wings A321 is the wings – in that they are the correct ones! The A321 has double slotted flaps which mean there are more flap track fairings on the rear of the wing. In detail you can see the extra spiky bits between the 3 large fairings. Phoenix and Aeroclassics have never seemed to care about this and use an A320 wing on all their sharklet equipped A321s. 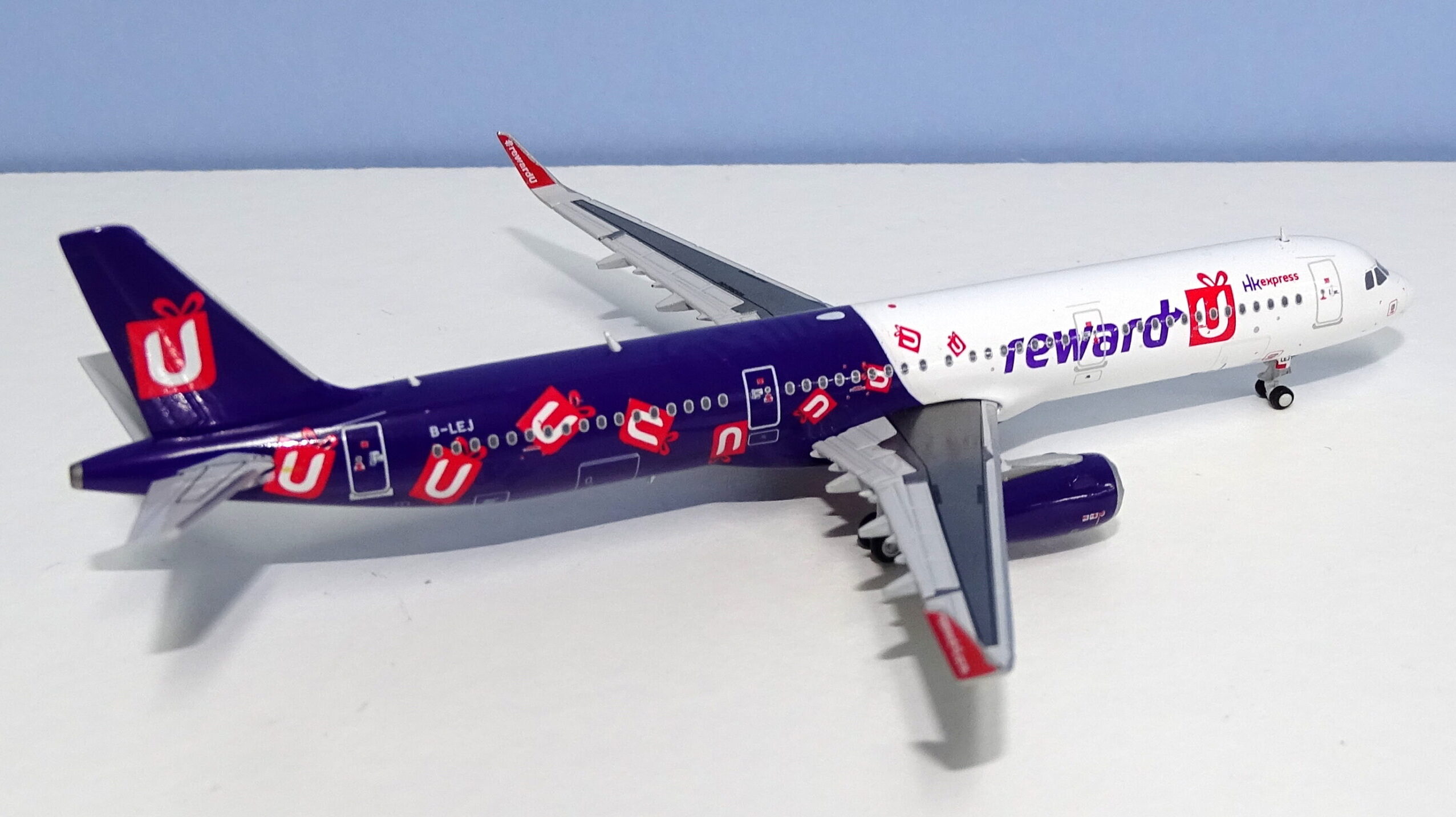 There’s no doubt that this A321 is inferior to the NG Models / HYJLwings and Panda Models version, however it is a good substitute in scenarios like this one where they haven’t made the livery. Certainly, it beats the Aeroclassics and Phoenix competitors neither of which use the correct wing in this instance.

The Reward-U scheme does away with the entire standard HK Express livery but keeps the purple and red colours. The rear half of the aircraft is purple with various versions of the U giftbox logo. The now defunct reward-u.com website appears on the inside and outside of the winglets and large reward U titles replace the standard titles forward. The standard HK Express logo only appears just aft of the L1 and R1 doors. 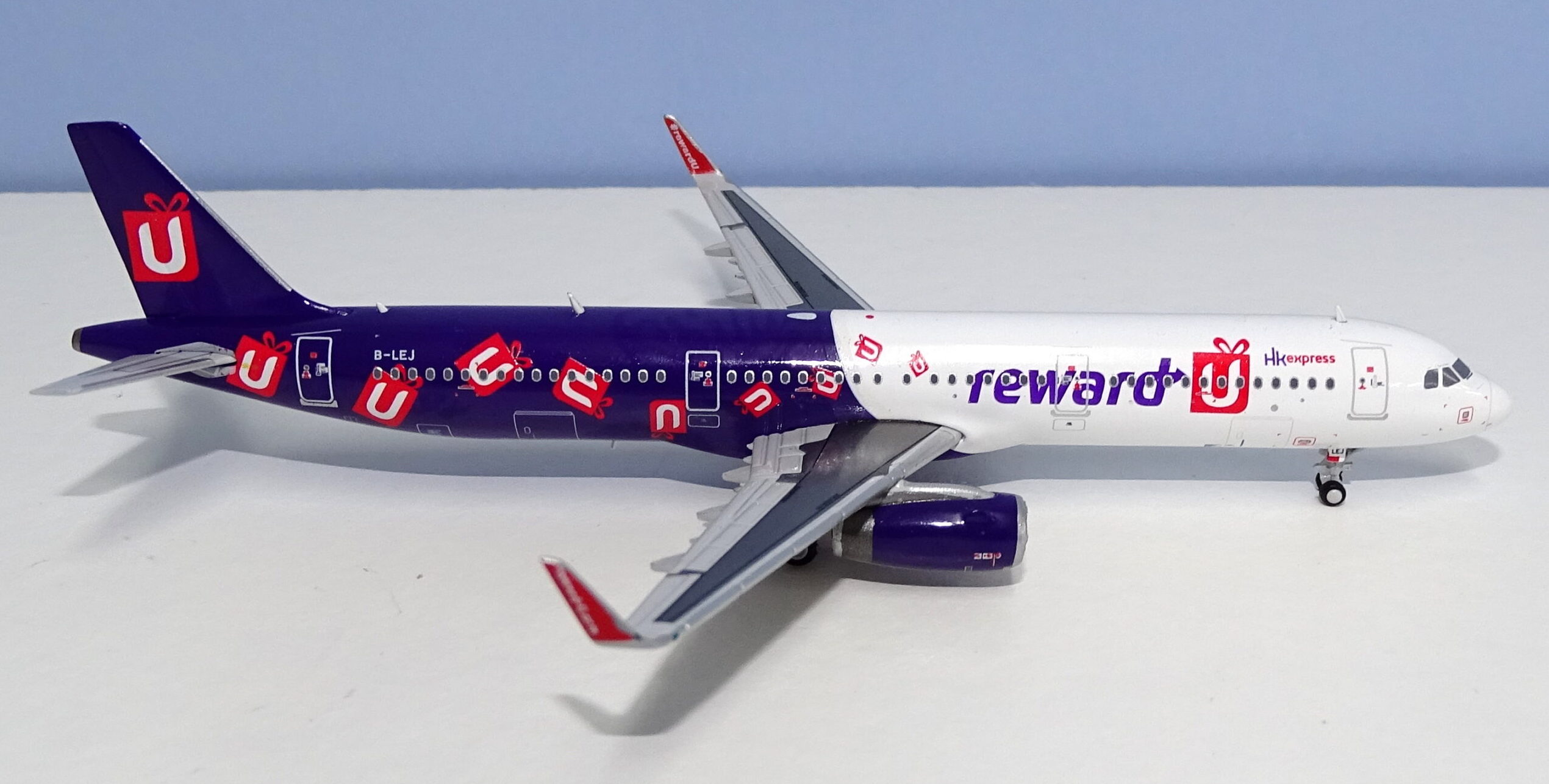 The deep purple and red colours of the scheme look good. The engines are correctly purple and the main titles use the correct font and positioning. The winglets correctly have reward-U.com on the outside and rewardU on the inside. 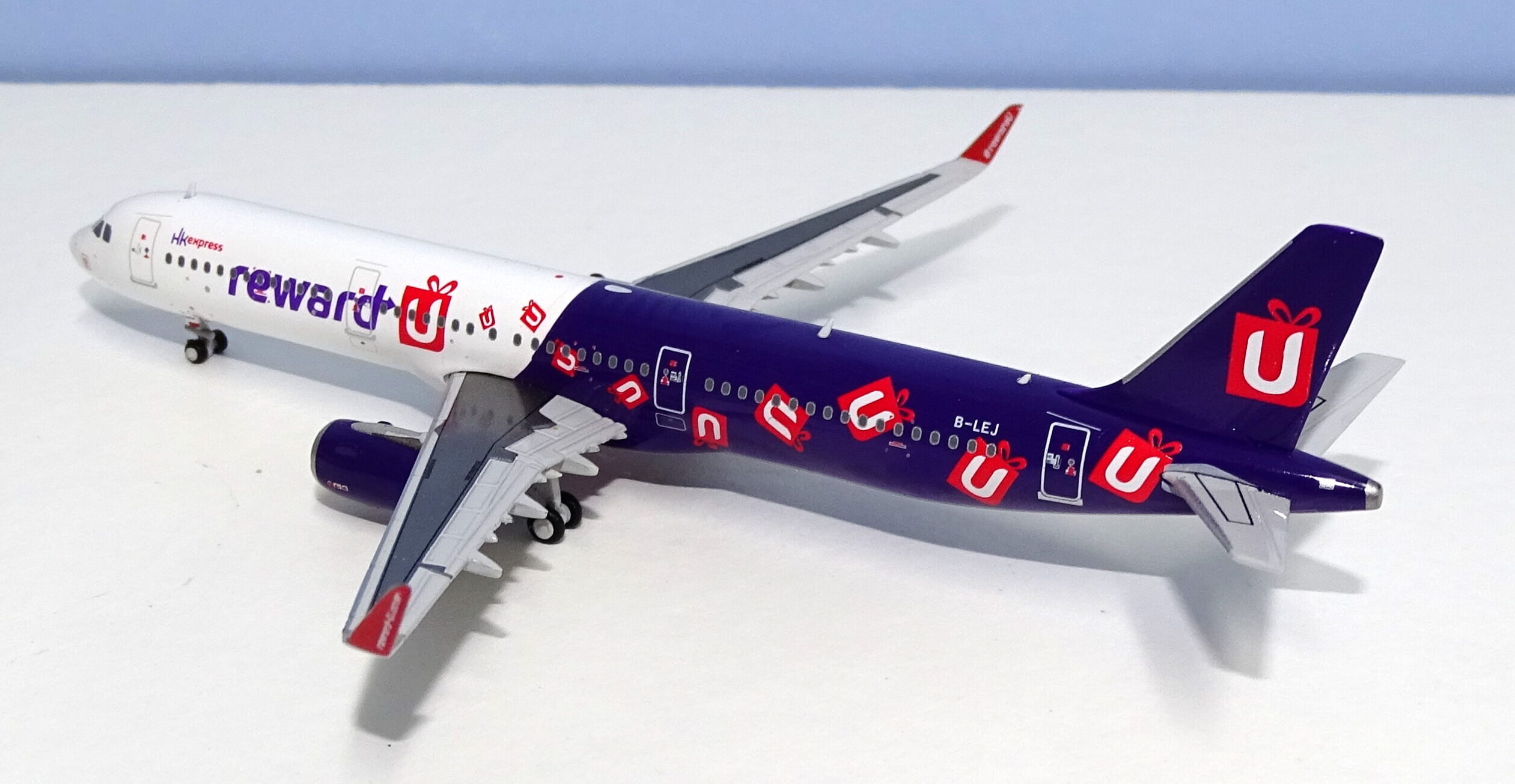 The tumbling gift boxes are well recreated on the fuselage aside from 1, which is slightly out of position. This is the penultimate box, just before the rear door. It is not angled quite correctly, but this is a minor point. 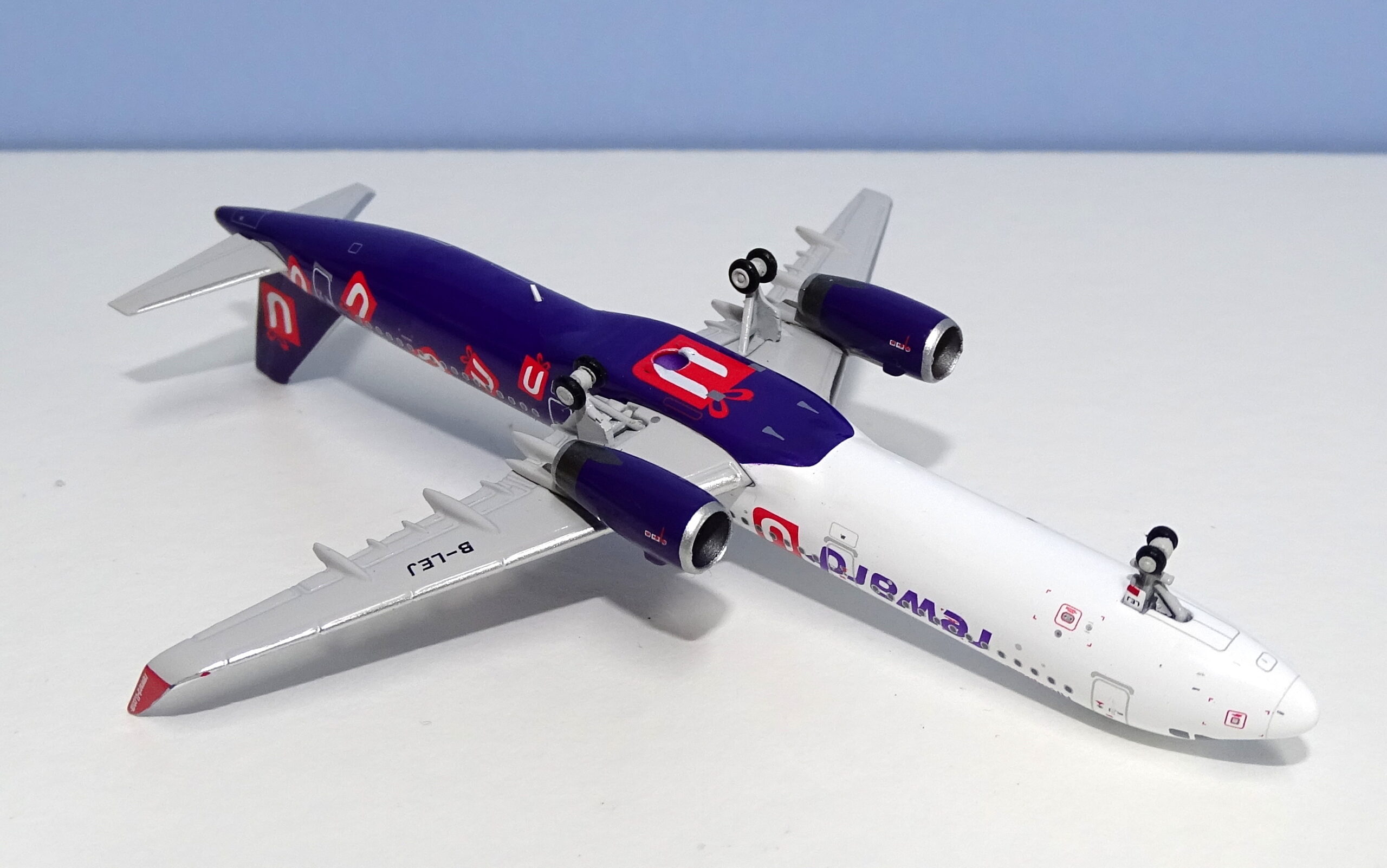 JC Wings can carry off detailed printing well and this model has plenty of it. On the starboard side where the underfloor baggage compartment doors are within the purple paint they are expertly finished in white. The printing is very crisp all over.

Build quality on the model is excellent, everything is attached well and there are no tyre tabs. I should also mention that this model comes in a non-standard smaller box with see through top and also comes with a HK Express branded small plastic stand, which is a nice touch.

The JC Wings A321 has always been the best of the A320 series moulds from that manufacturer and this is a nice model complete with crisp printing and good quality. It may not be the perfect mould but I know that JC Wings are still improving it and it performs well against the best A321s on the market. The model itself provides a nice snapshot of HK Express was taken over by Cathay Group and Covid arrived to change the world.

Welcome to this week’s Collector’s Spotlight where we take a look at one Air New Zealand fan’s ultimate 1:200 scale collection!

Aeroclassics have made lots of DC-10s but until October 2016 they had not crafted a series 40 version. Since then they have been dribbling out almost all the viable DC-10-40s but had been keeping their […]

Last week, Herpa Wings announced its lineup of releases for September and October. A total of 43 new models will released ranging in size from 1:72 scale to 1:500 scale. We take a look at some […]