It has been ups and downs of recent for Aeroclassics and hopefully the grand old brand can come through. March 2020 was the first month of Aeroclassics new selling mechanism whereby it no longer was selling to the majority of retailers inside the US and Canada. Instead it is now going direct from the distributor via its new website aeroclassicsdirect.com. I can only imagine the damage that Covid-19 will reek on model sales, especially with the volatile exchange rates but March’s releases were a solid set and I am always a sucker for their DC-9s.

Venezolana Internacional de Aviación Sociedad Anónima (VIASA) was formed on November 21, 1960 from the merger of L.A.V and the international operations of AVENSA. Together with a strong relationship with the Dutch flag carrier KLM VIASA became one of the leading South American airlines during the 1960s. Its initial jet equipment were KLM DC-8s and a trio of its own Convair 880s. The latter were used on international routes within the Americas, including as far North as New York and New Orleans.

One of the 880s was sold to Cathay Pacific in late 1965 and the other pair followed in 1967. They were replaced by smaller DC-9s wet-leased from AVENSA. The initial aircraft was a new build DC-9-14 and this was joined on February 27, 1969 by a DC-9-32, fresh from the Douglas factory. Unfortunately, this sparkling new twinjet would see less than a month’s service before it was destroyed in what was Venezuela’s worst aircraft accident for 36 years, and the first crash of a DC-9-30.

On Sunday March 16, 1969 VIASA flight 742 was to operate a scheduled service from Caracas to Miami, via Maracaibo. Temperature sensors along the runway, at the intermediate stop in Maracaibo, provided incorrect readings for the flight crew from which they programmed their take-off configuration. The result was that the aircraft was grossly overweight for the conditions. The take-off roll needed to get the aircraft safely into the air was far longer than the relatively short runway at the Grano de Oro airport and the DC-9 barely made it off the tarmac.

Even though it got airborne, it was not high enough for it to clear powerlines, only 50 metres above the ground beyond the runway, and after hitting several power poles it crashed in a small park in the La Trinidad section of the city. The aircraft had already had its left engine and wing ripped off prior to hitting the ground and the resulting crash and explosion killed all 74 passengers and 10 crew aboard. Worse, there were a further 71 casualties on the ground, making this the worst loss of life in a civil aviation crash to that date.

The accident was blamed both on the faulty sensors and the limited runway length. There was already a replacement airport under construction for Maracaibo and due to the crash the build of this was accelerated. La Chinita International opened nine months later and Grano de Oro was closed.

VIASA appears to have leased an AVENSA Caravelle III for a year as a short-term replacement for the DC-9. For the rest of the 1970s VIASA operated no short-range jets and instead relied on its DC-8s. It briefly operated another pair of DC-9s in 1981/82 before taking delivery of 2 new DC-9- Super 80s but by this time VIASA’s financial position was not great and both were returned to their lessors in 1984. 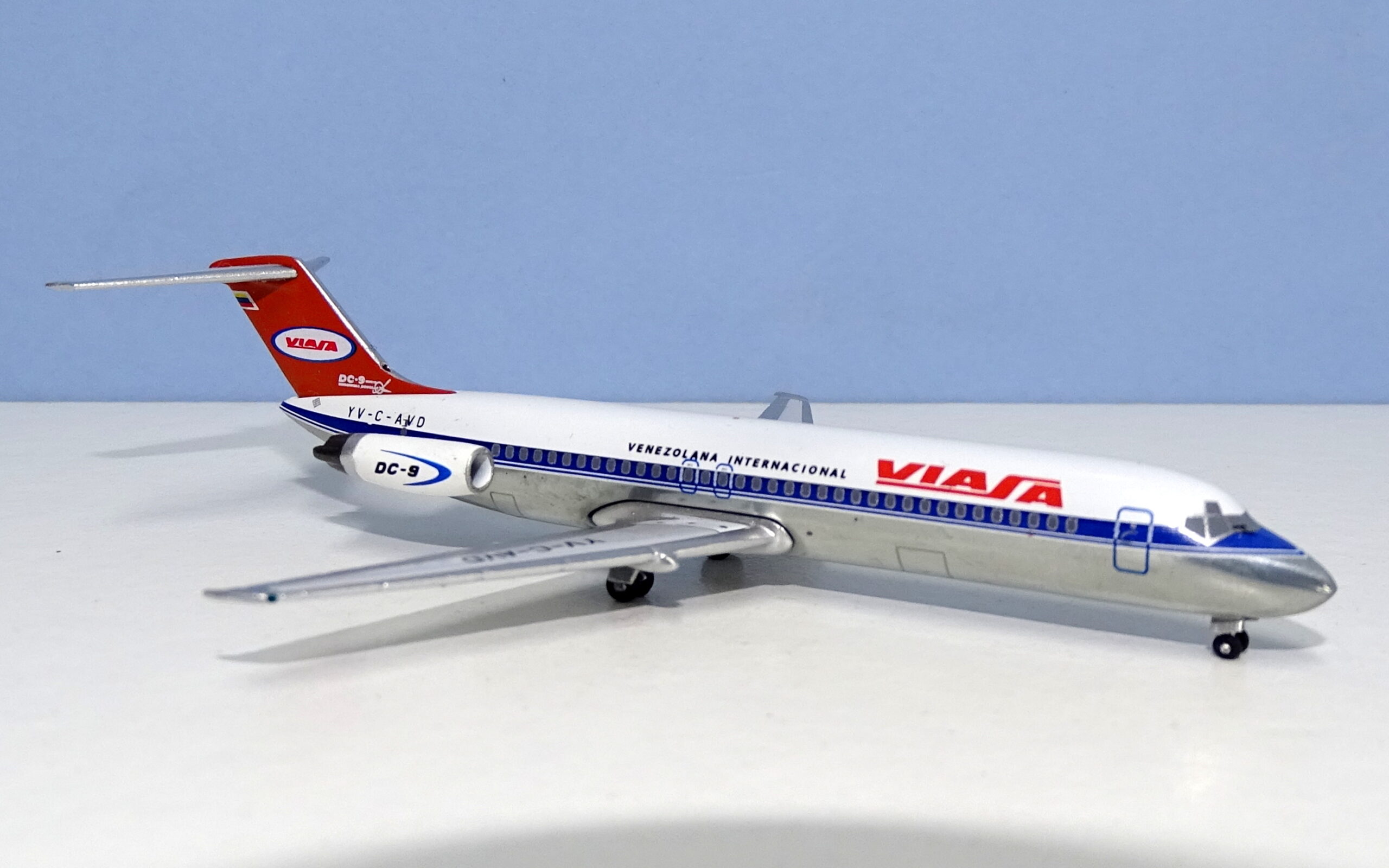 The DC-9 is a relatively simple looking aircraft but one that although attempted four times in 1:400 scale has only been particularly accurately recreated twice. The earliest moulds by SMA and Gemini Jets both have incorrectly shaped noses. The SMA mould’s radome is too large and chunky while the Gemini has an incorrect angle down from the cockpit.

It is the Aeroclassics DC-9, which is the most accurate of the four and it stands as one of the best moulds available to them (up there with their Boeing 707 and McDonnell Douglas DC-10). The fuselage shape of this 2008 vintage mould is picture perfect and the nosecone shape, essential to it looking like a DC-9, is super-accurate.

Aeroclassics usual simple landing gear fits these smaller narrowbody moulds perfectly since the simple style tyres on spigots allows for the small tyre size required and there is no need to create needless complexity with rolling gears. The nosegear is well placed and suitably small, as is the maingear.

The wings are detailed and thin, the engines perfectly sized and mounted, and the vertical stabilizer faultless. Criticism could be aimed at the cradle mounting of the wings but the seam is small, discrete and follows the fuselage fairing shape. There are of course no aerials in keeping with Aeroclassics’ philosophy but their absence is no loss here.

This is one of my favourite all time 1:400 castings. I just wish Aeroclassics could see to creating a DC-9-10 along similar lines. 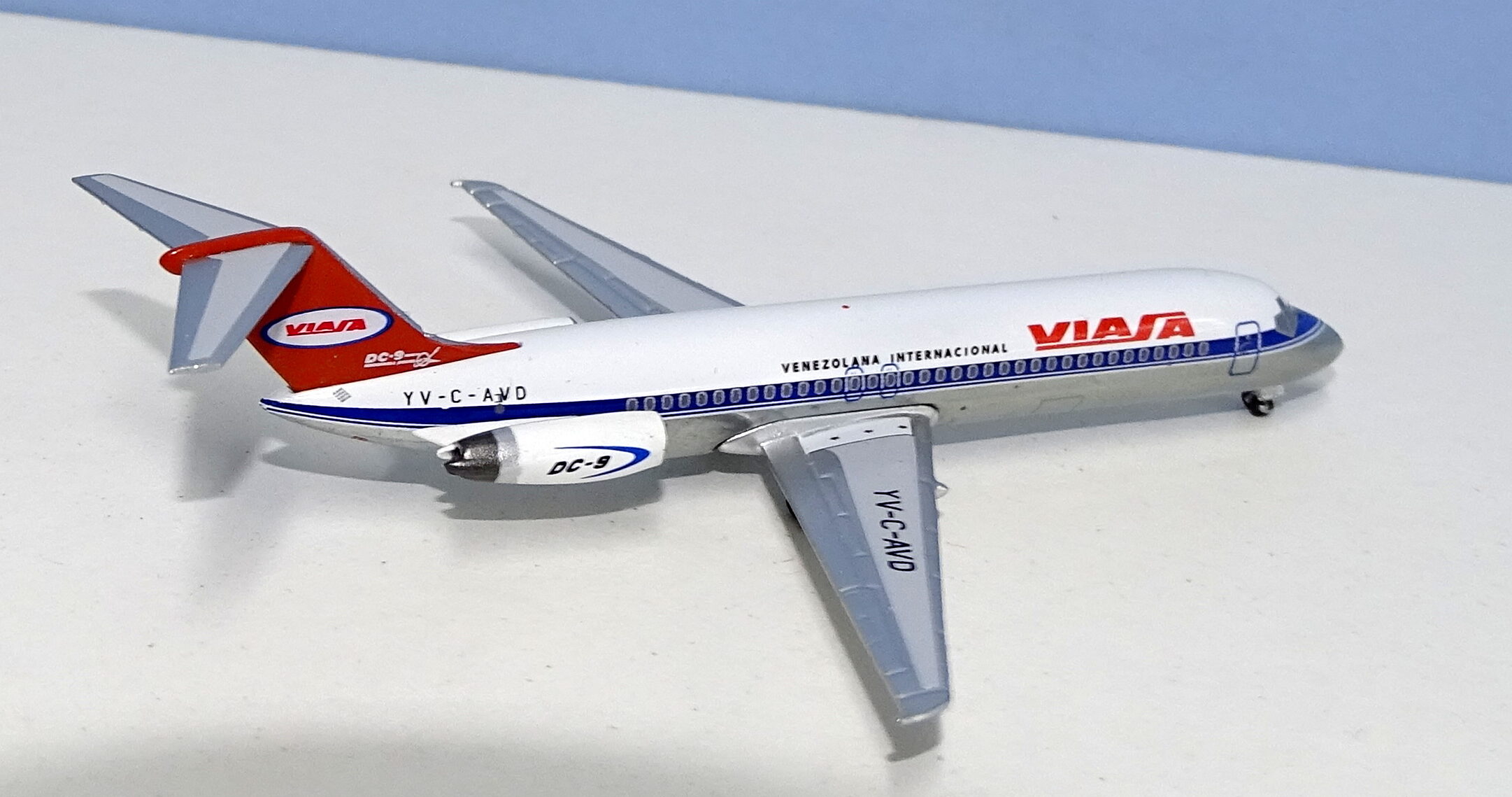 VIASA’s orange and blue livery was tastefully updated throughout its history, until the Iberia takeover in the 1990s. As you can imagine an aircraft that was only in service for just over a month didn’t have many photos taken of it. I can only find a single image at the Aviation Safety Network website here. It shows that the DC-9 wore the standard VIASA scheme of the time. There are other flightsim images of the aircraft and they do show that flightsimmers are paying more attention to detail than Aeroclassics.

I have to say that the model itself looks excellent; in fact, it probably looks better than the real thing did as Aeroclassics have carried the natural metal belly all the way forward covering the nose. Sadly, although this looks great, it is not accurate. The images linked to above show that in fact the thin white line under the cheatline expanded forward of the L1 door and covered the entire nose radome.

In other details Aeroclassics have done a much better job, albeit there are still detail errors. The main blue and orange colours are good and the position and font of the main titles accurate. Likewise, I’m happy with the tail, which has not only the VIASA logo inside the white oblong, but also has the small DC-9 logo and the Venezuelan flag.

The chevron on the engines is nice but the font of the large DC-9 inside it is not great. The text of all the elements is too curvy. My last ultra-nitpick is that the registration itself is about three letters too far forward. The D on the left-side should finish next to the little grill under the rudder line. 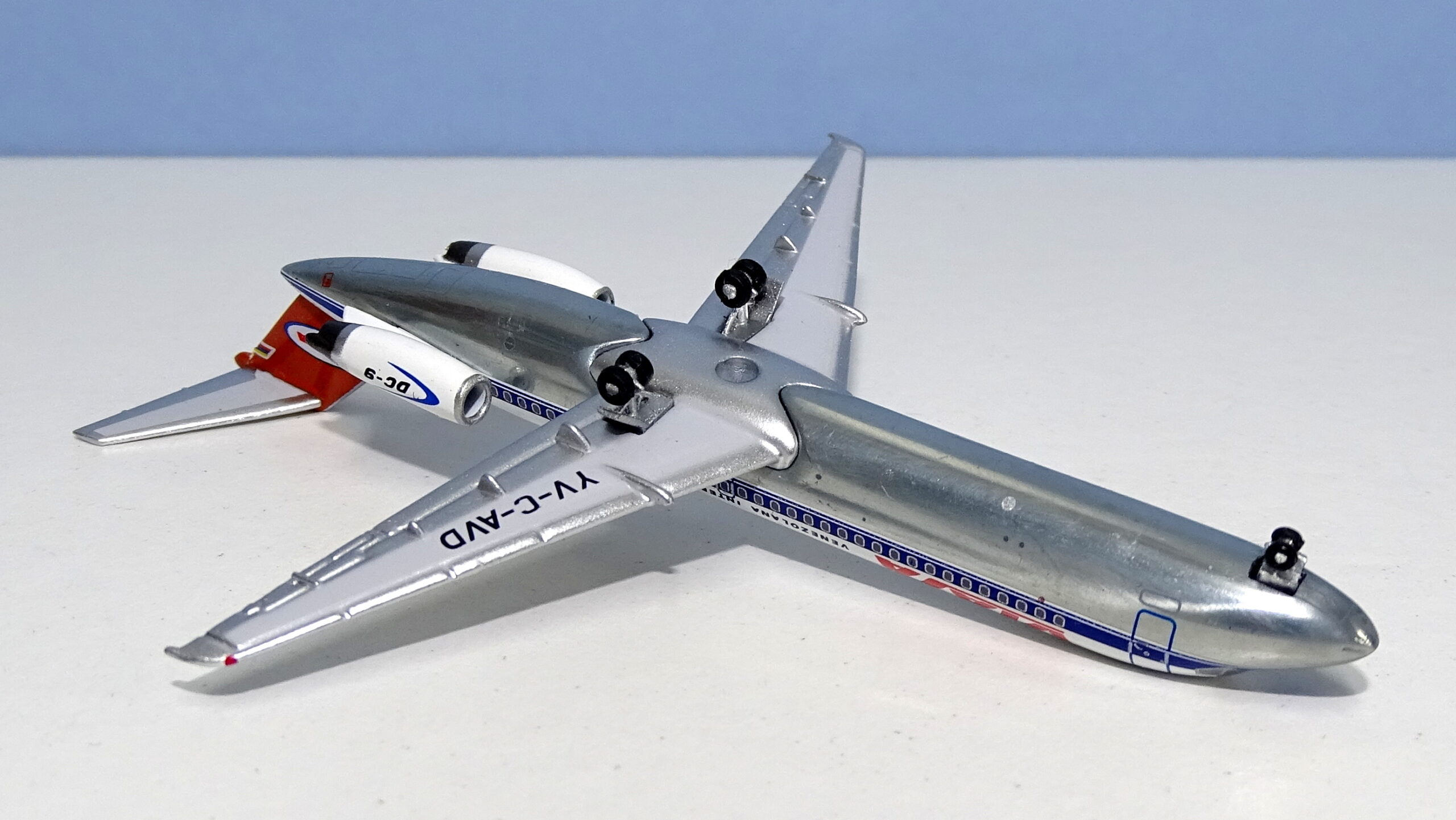 Aeroclassics have been hit and miss with the placement of windows on both DC-9s and 727s but this model has a nice set that are not slumped down the radome. The only photo of the aircraft does seem to show various grey panels along the belly but I get the feeling these weren’t present once the aircraft was delivered. The natural metal belly on this model is lovely, just a shame it isn’t quite accurate. Overall, the printing does what it needs to.

There are two criticisms of the engines. First the exhausts are too dark, which is very minor, and second the fanblades inside are left unpainted. That’s a bit more problematic as they would have obviously not been that light grey colour.

The DC-9 mould is simple and solid. This model has a tight fit between the wing cradle and fuselage. There are no build issues.

Aeroclassics have succeeded in creating a model that looks better than the real thing did but it is still inaccurate in a really obvious way when looking at the photo evidence. Why is this? At the end of the day I can only put it down to a lazy and disinterested workforce doing the graphics design. Even without aircraft knowledge (which the factory regularly shows it lacks) you just need eyes to see how the aircraft looks. If I can see it after a few seconds why can’t they when they are presumably spending hours on this task. Nevertheless, it is a very nice model, but that one mistake robs it of two points and a much higher score.

JC Wings new A320 mould has been out in the market since the end of 2016 but aside from an A320neo I have not had the opportunity to hold it in my hand until now. […]

Licensing is a funny thing; on the one hand some people want official releases and on the other I’d argue most people don’t care. I fall firmly into the latter category as charging for the […]

Thus far I’m thankful to be able to report that the primary impact Covid has had on me personally is that the flow of new models has been slowed significantly. Packages are still getting through […]