JC Wings has shown great interest in airliners wearing house colours and has the extensive mould catalogue available to back up that interest. Their regional airliners are particularly welcome and following on from the recent MD-90 I reviewed they have also made an E-Jet. This particular aircraft is not only the prototype but also marks a special certification that has been important in enabling sales of the type within Europe.

When London City Airport (LCY) first opened it was something of a white elephant. It undoubtedly provided premium access to the business district of London, thanks to its unrivalled docklands location, but was also restricted to operating a couple of aircraft types.

Primary among these was the de Havilland Canada Dash-7, which although an excellent STOL transport was rather inefficient for ordinary commuter types. Accordingly, it had sold only 113 examples and been superseded by the DHC-8 and ATR series. Nonetheless, both Brymon Airways and Eurocity Express (later London City Airways) commenced operations from London City in 1988 with Dash-7s.

Planning was in place for a runway extension and, although delayed by the economic downturn of the early 90s, this was completed and opened on March 5, 1992. This allowed for operations by other STOL types, mainly the BAE 146 and Avro RJ families. Gradually over time the airport has been expanded and with an increased apron it has become a destination for a wider variety of aircraft types, which must go through special certification to use the field.

In 2019 the airport was used by over 5 million passengers and the largest aircraft types certified to use the airport are the Airbus A318, A220-100 and Embraer ERJ-190SR. The latter type is nowadays heavily used by British Airways CityFlyer who ordered it, alongside the smaller ERJ-170, even before the type was able to use London City.

Embraer began steep approach tests with PP-XMA, named ‘Empress of London City’, on March 2009 and had to perform a minimum of 40 take-off and landings as part of the certification programme. The manufacturer had already simulated over 50 rotations at Macapa Airport in Brasil, which was able to simulate conditions at LCY. The E-Jets systems tackle the steep approach using a software modification that enables the fly-by-wire system to deploy the spoilers to create extra drag. In the cockpit there is only one extra button to be used by the crew.

A big part of the certification was measuring the aircraft’s noise footprint. Also important was ground maneuvering since at the time the ERJ was the largest type at LCY. It was longer than the DHC-8-Q400 and had a much larger vertical fin, although its wingspan is smaller than the Fokker 50.

Tests went as well as Embraer had expected, and BA was able to use the new E-Jets to replace its trusty Avro RJs from April 2010. Initially CityFlyer took delivery of 5 ERJ-190SRs but the fleet was expanded to 18 as further new and second-hand examples were added. PP-XMA, the aircraft used for the trials, was built as the prototype and first flew on December 3, 2004. She was still wearing the same London City scheme as of December 2018.

See the following link for a variety of photos of this airframe in the scheme displayed by this model.

This is the 21st outing for this E-jet mould, which has been in use since 2014. Overall, it is a pretty good effort. The fuselage is good and although there could be a slightly stronger change of angle at the cockpit nose transition, I think it captures the look of the aircraft well.

That isn’t to say that the casting is perfect and in my opinion most of the problems are the result of the nosegear. Most obviously it isn’t quite in the correct position. It has been fitted a couple of mm too far to the rear since it should begin immediately aft of the cockpit window end line and instead is closer to the L1 door. This accentuates the long nose of the aircraft and gives the impression it is too long. I don’t think it is but the nosegear isn’t in the right place and the tyre is too small also.

The vertical stabilizer, tailcone, engines and wings are all very good. My only criticism is a small one in that the flap track fairings are a little too round. More questionable is the complete lack of aerials on the model. The real aircraft has four, three of which are quite large and unusually shaped. JC Wings has featured all four aerials before but the last time they did so was on the Colorful Guizhou Airlines release in 2016. The aerials were excellent so I don’t know why they have been omitted since. 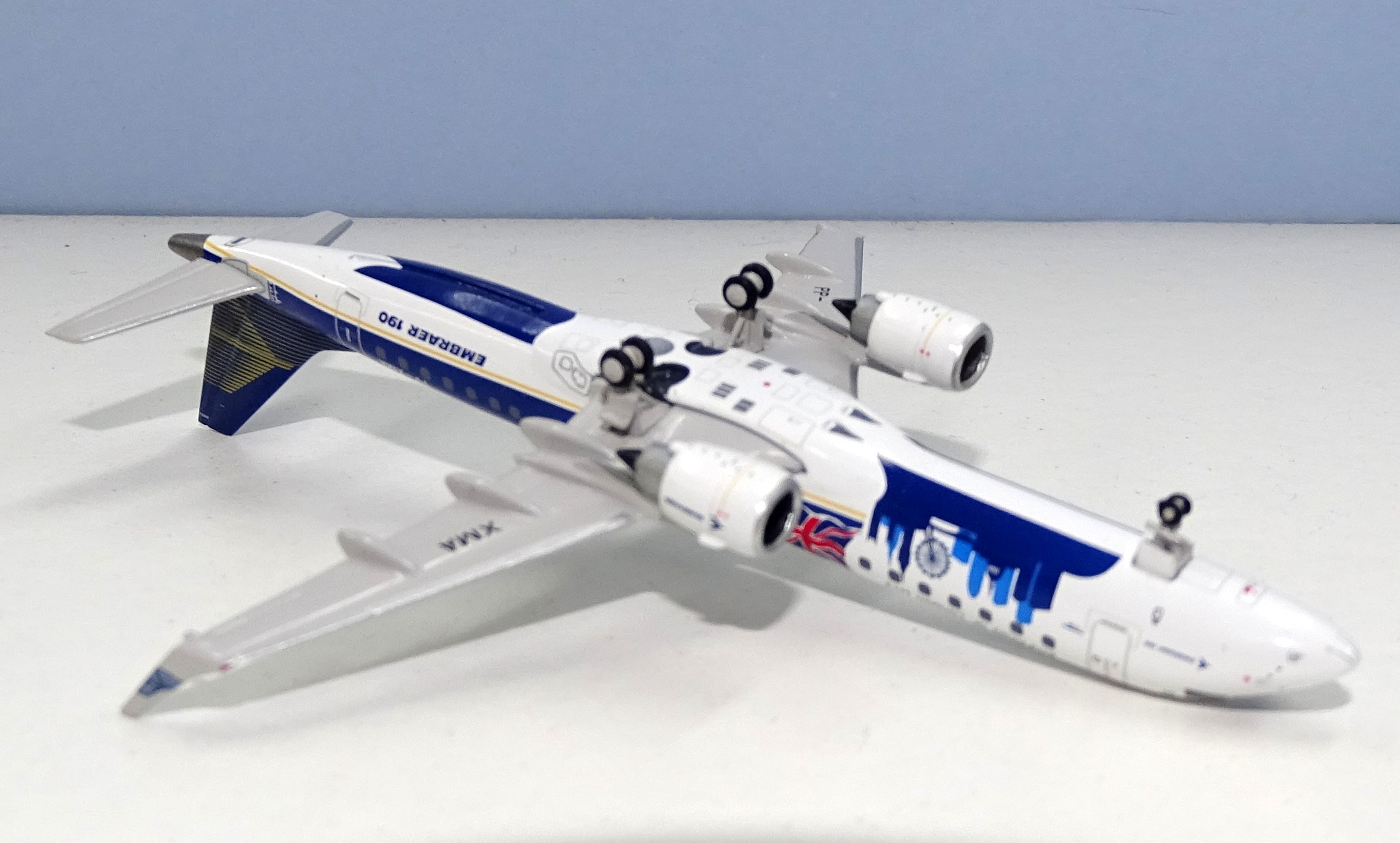 The unusual rear ventral strake appears to be lacking on the prototype and is also lacking on the model here, although the groove for it is present. The underside of the model is especially well detailed with very nice scoops and indented spaces for the maingear tyres. I quite like this mould but changing the nosegear position would do it wonders.

The London City trials included a repaint modifying the standard Embraer house colours with a large, and rather inaccurate, Union Jack plus the London skyline including the gherkin, London Eye, St Pauls and Houses of Parliament. It is very tasteful and I can understand why Embraer hasn’t repainted over it.

The primary livery colours are a deep blue and gold. The blue may be a little too dark and the gold not quite bright enough but they are close enough for my poor colour vision. Placement of the livery elements is excellent. This is all the more impressive when you consider the size of the model. The London skyline is very detailed and everything is in the right place, aside from the line of the forward blue belly. This ends too far back but that is because of the incorrect nosegear placement. 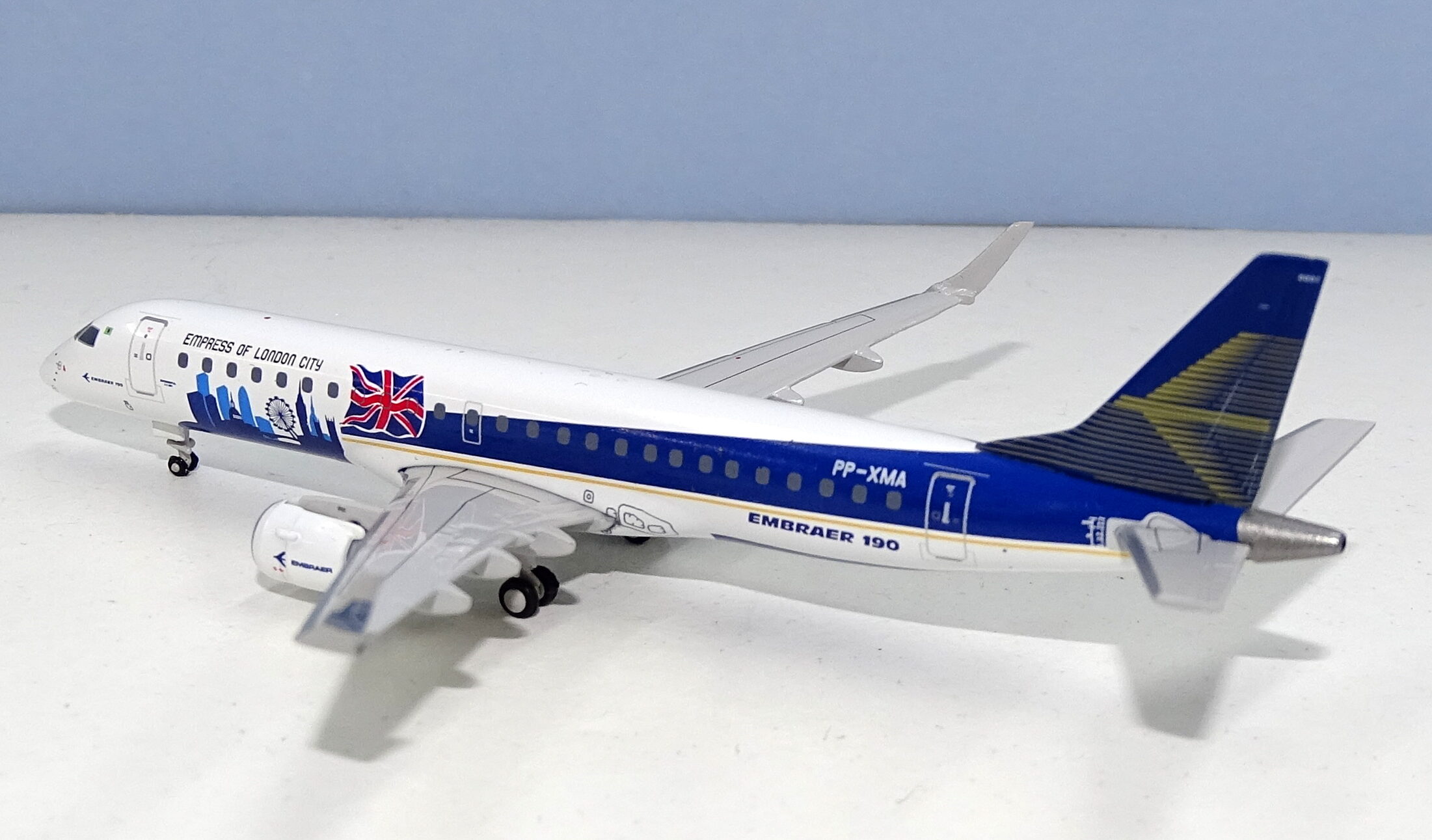 The detail is superb. The spokes of the London Eye for example are actually clearer on the model than on the real aircraft. The unusual curved font used for the EMPRESS OF LONDON CITY titles is spot-on and smaller features like the Embraer name and logo on the engines as it should be.

JC Wings can do great detailed printing and they do not fail with this model.  Precision and fineness are the name of the game. Things like the nosecone radome lines, engine panel lines and line detail on the underside make this model a joy to get up close too. The paintwork is also topnotch especially the tidiness and colour of inside the engines. Also, pleasingly, and unlike the last E-190 I reviewed, the cockpit windows are in exactly the right place.

Build quality is excellent. Everything is firmly attached and the tiny gears even roll well.

This year’s reviewed models have been something of a disappointment and so it is refreshing that JC Wings have here proven they can deliver the highest quality even on one of the smallest moulds in the scale. There is plenty of scope for more ERJ-190s, I’d snap up Tianjin Airlines and GX Airlines examples, so hopefully this excellent release will spur JC Wings to dabble further in their E-jet lineup.

Hello model collectors, we are excited to announced another contest at The Diecast Flier! It’s time to get those photos of your models ready as we’ll be having a Model Aircraft Photography Contest! To enter, […]