The wait for JC Wings to get its new 747-400 mould, which was previewed by myself way back in 2018, into production has been interminable . I am seriously questioning if we will ever see it and whether NG Models beats them to the punch. Until then the collectorate is forced to put up with the inferior Phoenix effort and one of the founding moulds of all 1:400 history. I know which of those I’ll choose so until something better comes along let’s take a look at a new JC Wings Singapore Megatop.

In recent years seeing a 747-400 at your local international airport has become increasingly difficult and the Covid-19 crisis has only exacerbated the end of the definitive version of the Jumbo. By March 2020 only 111 747-400s were left in service (including BCF conversions) but since then KLM and Qantas have retired their series 400s permanently, Virgin will retire its by end of year (if it lasts that long) and Lufthansa and British Airways are speeding up retirements too. Without those all that are left are a handful of second line operators. So soon it’ll be just our model collections from which we can see the series 400s.

Aside from British Airways the airline with perhaps the biggest claim to be the 747-400 airline is Singapore Airlines, which built its long-haul fleet around the type in the 1990s and early 2000s before 777-300ERs began to arrive in numbers. Singapore Airlines had a penchant for naming its airliner types during the 1980s and 90s. The 747-300s had been Big Tops so it was fitting for the 747-400s to gain the Megatop moniker (later names for the A340, ‘Celestar’, and 777s, ‘Jubilee’, were less successful).

Singapore certainly placed mega orders for the 747-400 and received 41 of the 747-412s as well as 18 747-412Fs (the latter were dubbed Mega Arks). The first aircraft, 9V-SMA, joined the fleet on March 18, 1989 and nine days later the first Trans-Pacific flight was operated, making Singapore the first to fly the type across the Pacific Ocean.

Singapore Airlines was a pace-setter and introduced personal in-flight entertainment systems on its 747s from April 15, 1992. They quickly became the largest operator of the type with 23 on strength by February 1994, including the 1000th 747 built (9V-SMU). I’m proud to say that it was this aircraft that brought me to New Zealand when I emigrated from the UK in 2005.

Deliveries of passenger 747-400s to Singapore continued until October 2001 but only 12 years later the type was retired from the fleet, replaced by 777s and A380s. The last regular service was a Singapore to Melbourne return operated on March 25. There was still time for a final enthusiast’s service by the youngest aircraft in the fleet, 9V-SPQ, to Hong Kong and back on April 6 but after that the 747 was only operating with SQ as a freighter.

Like many of the fleet 9V-SMS, delivered new in June 1993, was quickly converted to a freighter. She served with Cathay as B-KAH and subsequently with Air China cargo as B-2453. 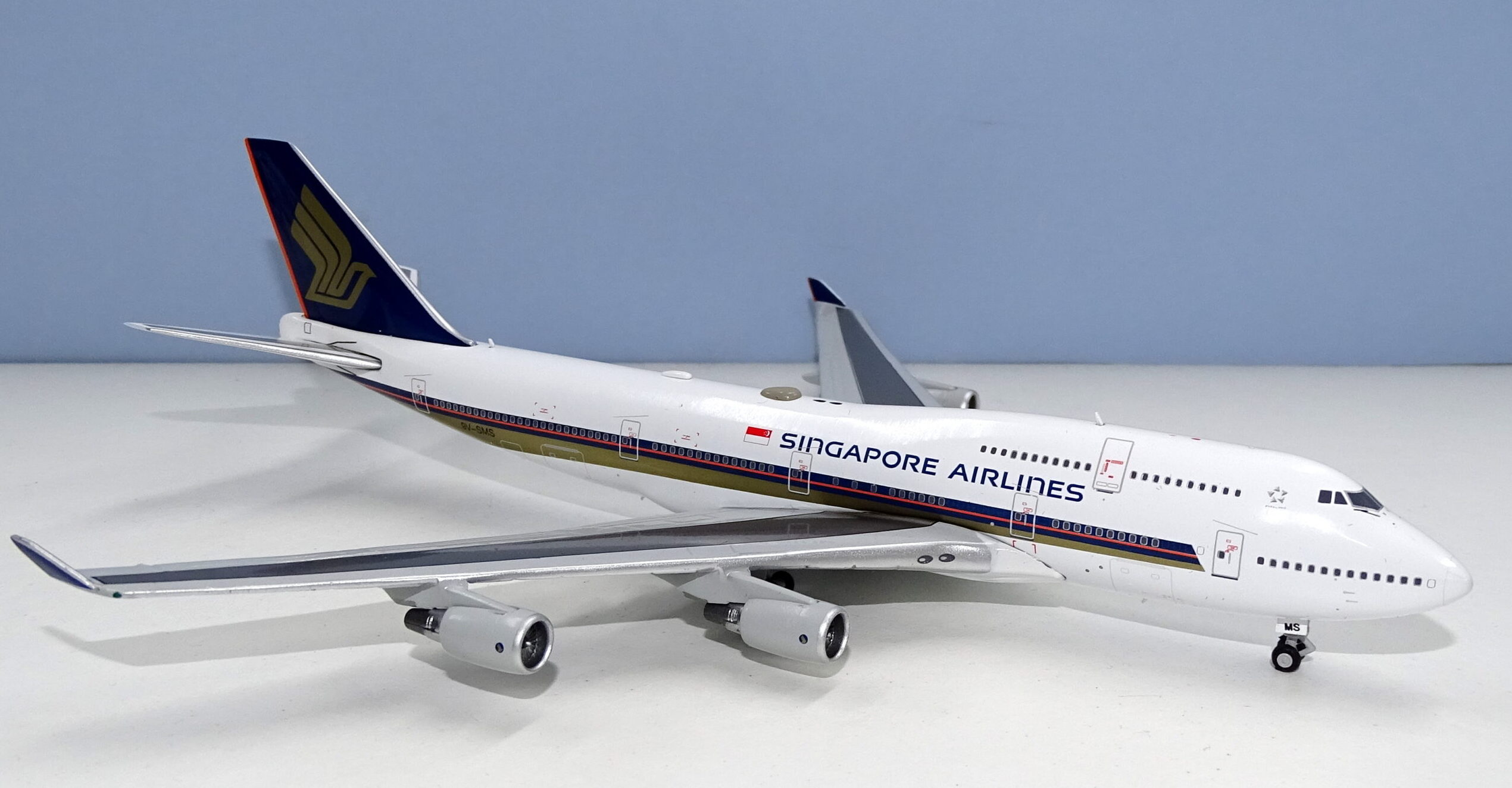 The lack of good modern 747 moulds in 1:400 scale, especially considering the rarity of the excellent BigBird releases, is something of a mystery to me. The Phoenix mould in use now for over 10 years is a disgraceful casting completely unworthy of anybody’s collection. BigBird Mk3 have proven a complete waste of time, having produced only a handful of 747s in the past 5 years or so. The result is that if you want a passable modern 747-400 release about the only place you can find it is coming from the JC Wings factory. JC Wings of course produce Gemini Jets and so have access to all the old Gemini moulds as well as their own. 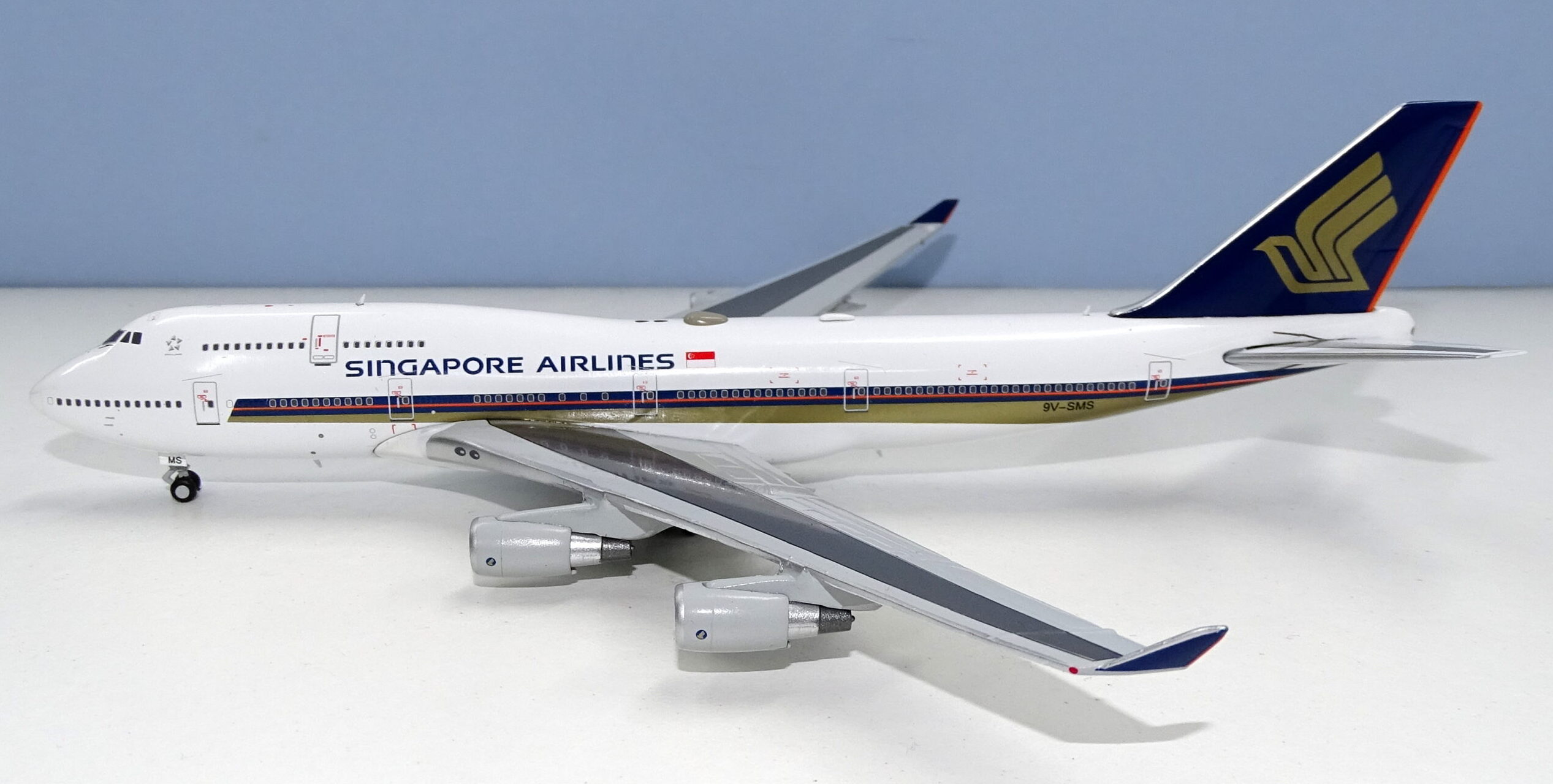 Gemini’s old 747-400 mould was Gemini’s first ever casting and dates from 1999. It is solid, reliable and in 2003 Gemini updated it by removing the old second seam at the horizontal stabilisers. In recent years the mould has been further upgraded with new undercarriage and now antenna too, both of which are marked improvements for the original casting.

The 747-400 had quite a lot of aerials and JC Wings replicate the four largest on this model (two above and two below).  They also have added both of the two large domes atop the rear fuselage. The detail and shape of these additions is very good. 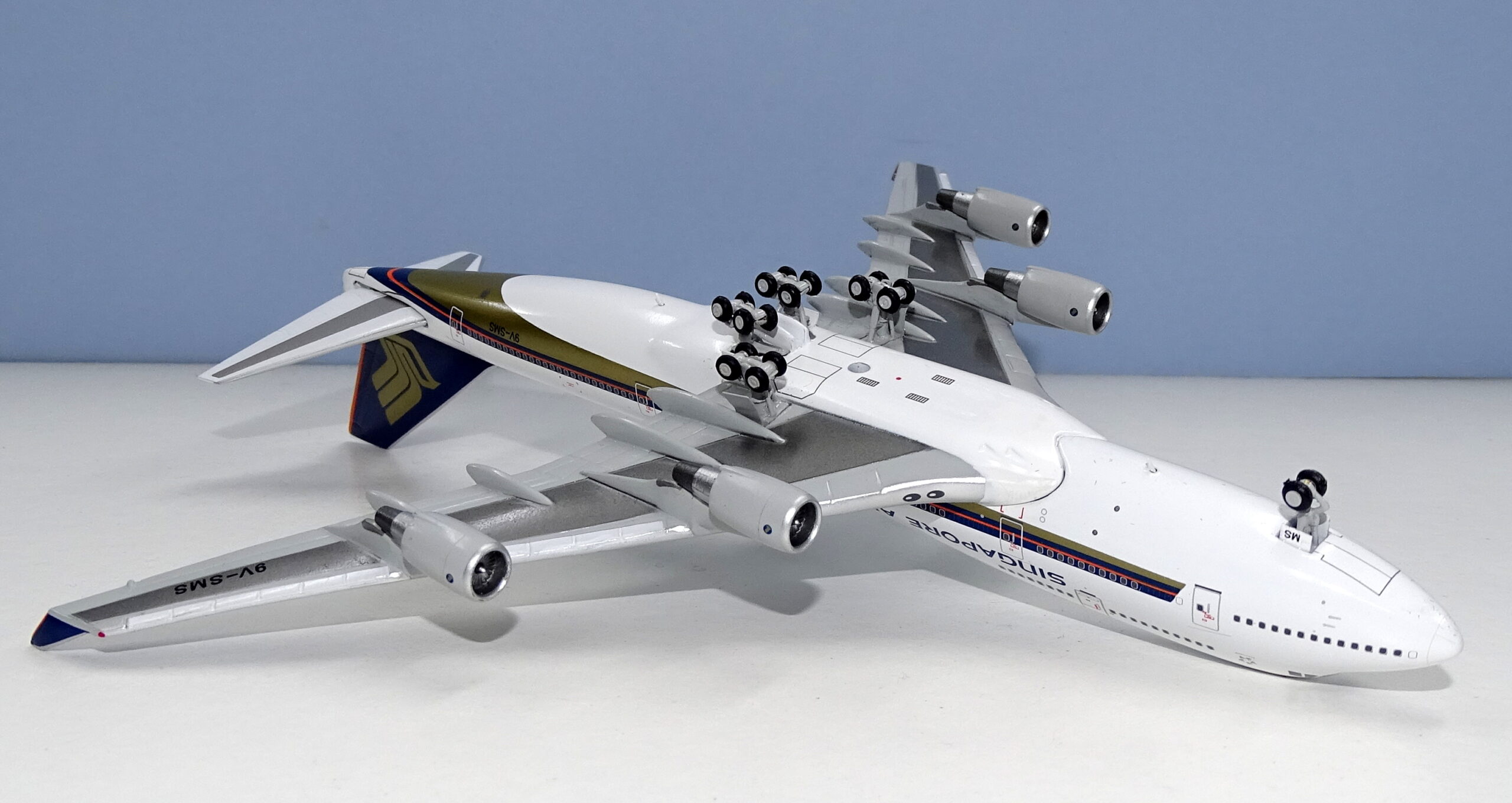 The tail, rear fuselage and wings are very nice, however the age of the mould shows in a couple of places. The rather cumbersome wing pylon/wing join isn’t great and this is a well known ‘feature’ of these Gemini 747s.  I can live with it. The cradle wing/fuselage join is tastefully done. The mould would be improved if it were seamless and had better pylons, but given its age it is unreasonable to have these expectations.

The nose of the mould is a bit too pointy but it still looks like a 747. Ignoring the pylons this really is a nice mould. It’s not as good as the BigBird and Witty 747s, but little is. I still wait in anticipation for the new JC Wings 747-400, which looked excellent, but in the meantime this will have to do. 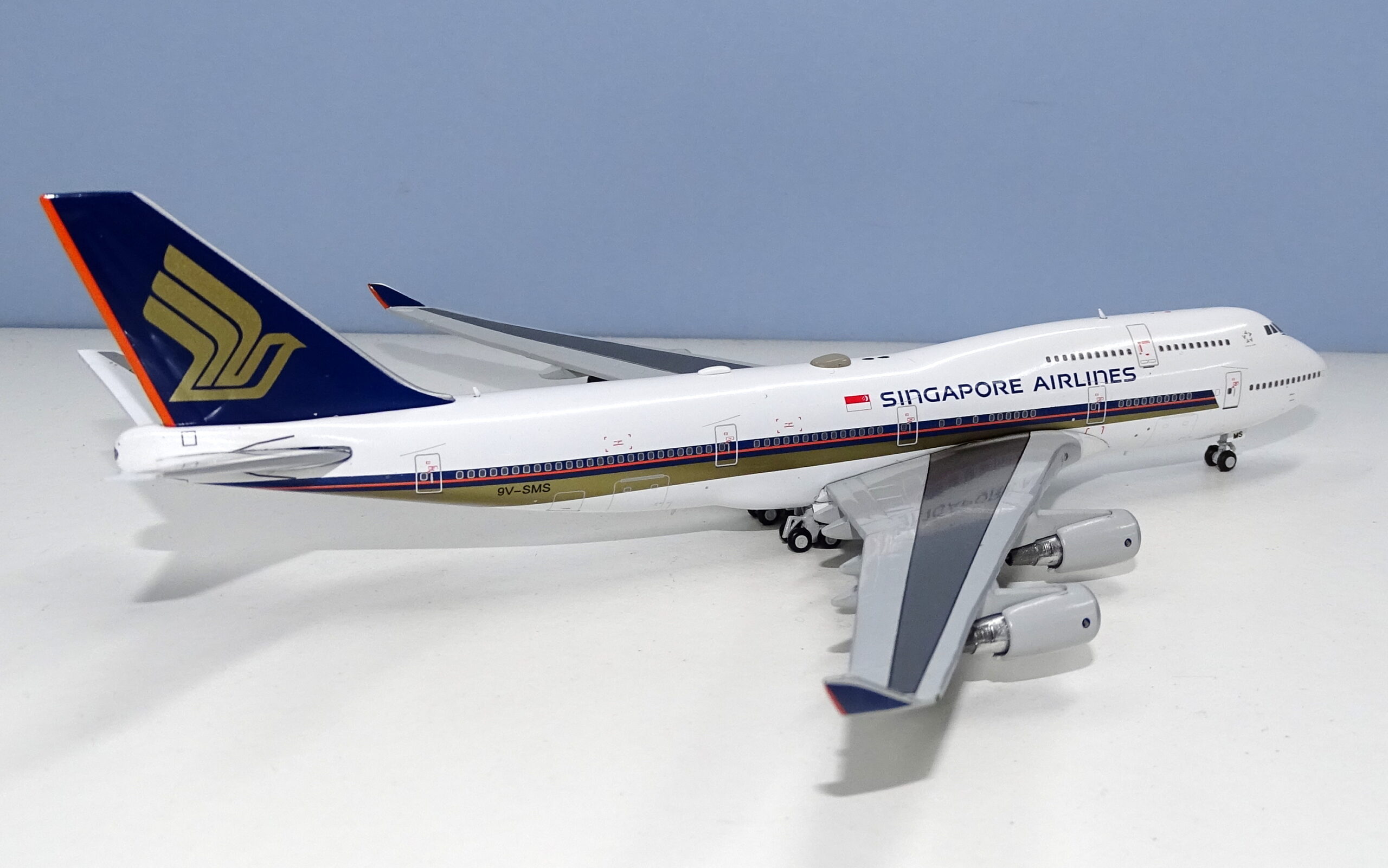 This model represents the livery worn by 9V-SMS towards the end of her career in the mid-late 2000s. By that time the Megatop name had been long dropped and was not carried on the aircraft. Otherwise the livery was unchanged since the type entered service, although of course the aircraft from the early 90s lacked the fuselage domes.

The central livery reproduction on this model is essentially flawless in placement of the main elements. The bird logo on the tail, inspired by the mystical Kris dagger, is perfectly shaped and placed. Like Aeroclassics JC Wings do regularly produce liveries towards the darker end of the spectrum and although the bird, and lower cheatline, are correctly gold it does seem too dark by some distance to me.

Aside from the gold colour the cheatline is excellent and small details such as the rear stripe on the winglets and bird logo on the engines are present. Looking at photos I do however think the Star Alliance logo is too small.

The main titles are spot on as is the Singaporean flag. Overall, this is a good rendition, which could be improved only by lightening the shade of gold used.

Printing is up to the usual high JC Wings standard and includes fine details such as the nosecone ring. The larger dome atop the fuselage is correctly painted a dark grey. My only criticism is the engine inners, which could be a tad darker.

This old 747-400 mould is solid as a rock and even the newer additions are fitted well. The domes atop the fuselage are particularly well fitted.

Models using older moulds start from a position of disadvantage and so although this model gets a score of only 25 that is not to say it isn’t a good effort. It has no major flaws, aside from the shade of gold, but is still not the definitive Singapore 747-400 this scale deserves. That will have to wait until someone sees fit to release a new 747-400 mould, which will allow this venerable mould to be retired and at the same time hopefully kill off the horrendous Phoenix mould too.

The ascendancy of NG Models in 400 scale continues apace with the introduction of their new Airbus A350, a mould that has seemingly gained more excitement than their 747SP. This is despite there being multiple […]

Here are a list of the model shows and popular airshow that will take place next month!