Aviation400 are making something of a name for themselves in 1:400 scale, both good and bad. On the credit side their A350 is excellent (and their 777 looks like it might be too) but on the debit side their correlation of announcements and releases is rather JC Wings like. Just last week their April 2020 releases arrived and they had been originally announced in June 2019. These included a trio of military A330s so it is timely to look at one of the civilian A330s they have made recently to see how the mould fares.

Civil aviation is obviously in the midst of taking a pounding the likes of which, even such a volatile industry as it is, has never seen before. China may seemingly be moving into a new post-Covid phase but that hasn’t helped the airlines much, which took the hit earlier than other countries carriers. In fact, in the first three months of the year the industry suffered a 39.82 billion yuan ($5.6 billion) loss and air traffic figures slumped by 53.9%. It is hard to see the industry in China returning to health anytime soon, but even so there is little doubt that the government owned big three will survive.

China Eastern Airlines is a core part of the Chinese State and has extensive ties with other partners. One of these is the largest newspaper group in China – People’s Daily. This is the official newspaper of the Central Committee of the Communist Party of China and also unsurprisingly has a strong online presence with People’s Daily Online.

As early as 2012 China eastern signed a strategic co-operation framework, whereby both companies would work together, and in July 2012 a China Eastern A330-300, B-6126, was painted in a bright orange and red scheme. This 2006 build aircraft undertook its last revenue flight for China Eastern on April 22, 2018 and has since seen service with Onur Air. Nowadays it operates as M-BLGR and has been converted to a freighter for DHL.

Replacing it as the People.cn flagship is B-5931, a 2013 build A330-243, now operating in a modified, and toned down, People’s Daily Online scheme. The aircraft made its debut flight on April 15, 2019 flying between Shanghai and Beijing. The aircraft repaint coincided with its return from China Eastern subsidiary Shanghai Airlines, with whom it had been operating since July 24, 2014.

No doubt in the post Covid world China will attempt to make strategic gains and trumpet its one-party system as a model of success in fighting the disease. I am sure that China Eastern and People’s Daily will both prove important instruments in this and this Airbus A330 is a visual reminder of the relationship of the Chinese government in every aspect of the life of China’s population.

Aviation400’s Airbus A350 is rightfully lauded but their A330s do not deserve the same plaudits. Literally everybody makes a 1:400 scale Airbus A330 nowadays and this is easily the weakest of the bunch, although it isn’t a total loss. 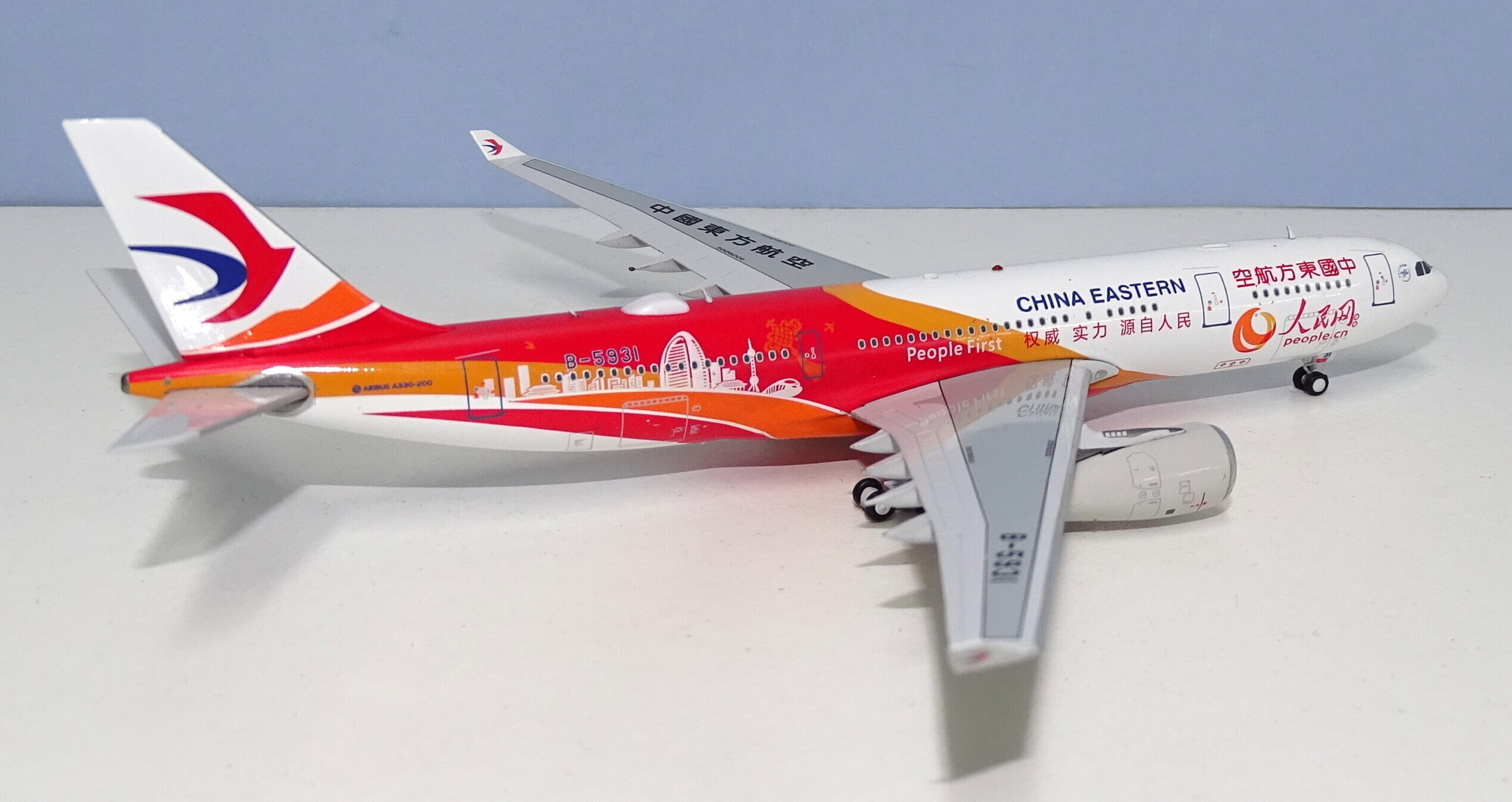 The main problem area with this casting is the front-end. The nose is too rounded and doesn’t have the characteristic sharpness found on the A300-A340 lineage. Additionally the angle down from the forehead to the nosecone is too rounded whereas the cockpit of an A330 is actually quite angular. This part of the mould reminds me of the criminally bad transition attempted by the Phoenix Models A300. It isn’t quite that bad but it isn’t good.

The nosegear is well positioned but the nosegear doors are slightly too small and the forward process on the gear leg is too high. The nosegear and maingear are both also a little short, but they are at least the same height as each other thereby avoiding the taildown issues the JC mould has. The rest of the fuselage is accurate and so are the wings, which slot into the fuselage tightly. The rear wing join is well modeled as are the various scoops on the underside of the fuselage.

The Trent 772C-60 engines are well shaped and hang from convincing pylons but they do hang a little low, most noticeable when viewing the distance between the engine rear and wing. A nice detail is that the engines are see through, although this does mean the fanblades are a little too thin in order to carry off the effect.

One of the areas that has made the AV A350 well liked is the addition of navigation lights atop and beneath the fuselage. The A330 also has this detail but it has not been carried off with the same panache. The beacon atop the fuselage sits up like a little volcano, or spot, and is a bit off-putting. The one under the fuselage is better. 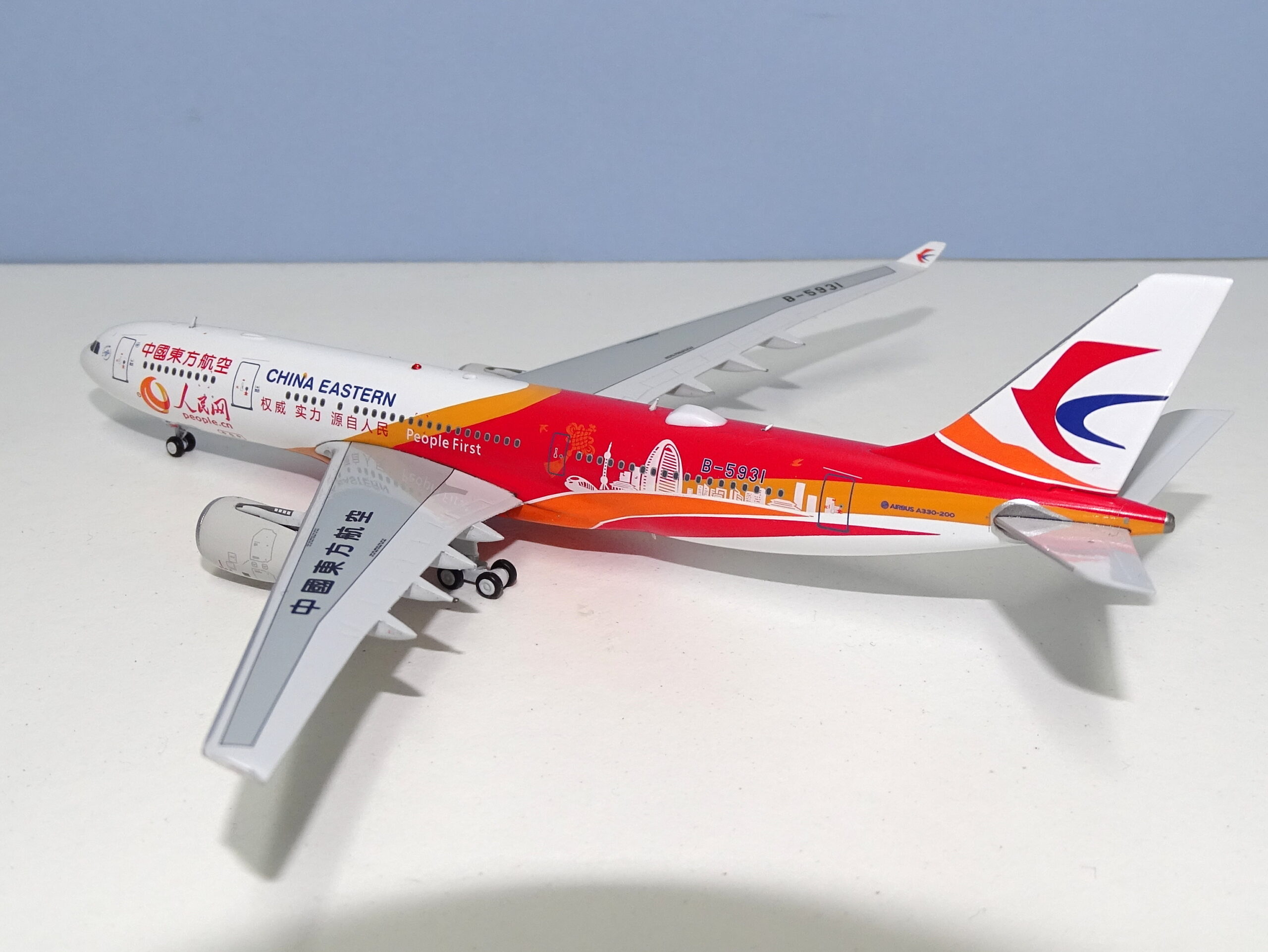 Better are the rather complex collection of bumps, domes and aerials. The four major aerials are all present but are perhaps a tad too tall. A nice detail is that the small roof bumps are all present. The forward one is moulded in while the mid-wing one is an addition. Further aft the large Wi-Fi dome is very nicely modeled and fitted.

This mould is up against some tough competition with the Aeroclassics, Panda Models, NG Models and Phoenix A330s all being strong and desirable moulds. This one no better, and in some ways worse, than the JC Wings / Gemini A330 and probably my least favourite of the 6 available extant moulds. 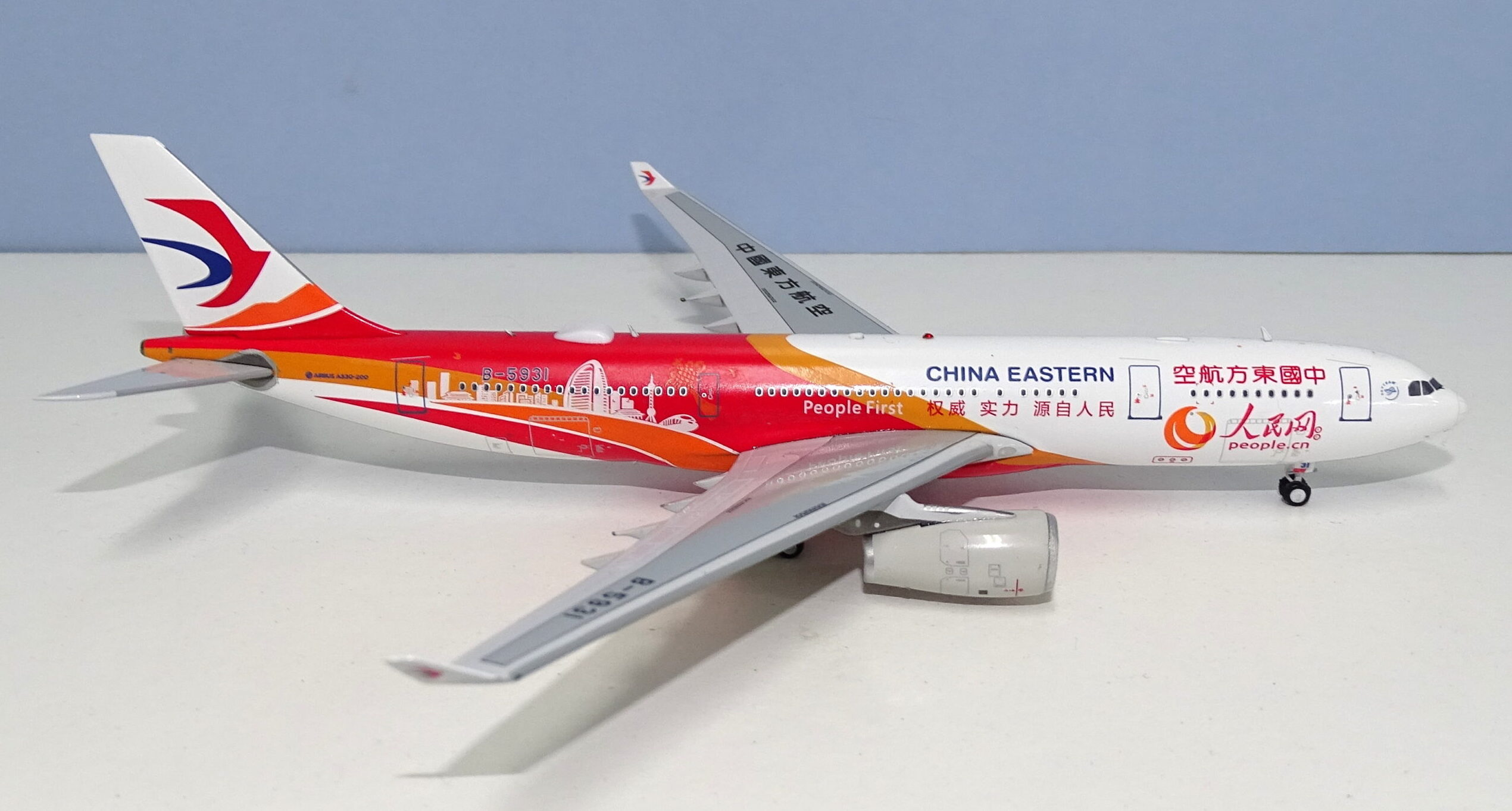 China Eastern needs special schemes to enliven its famously dull standard colours. Fortunately, the airline loves them and it wouldn’t surprise me if that was part of the reason for adopting the ultra-bland super-euro-white scheme in the first place. This scheme is very attractive and no doubt a far cry from the bland party-line reporting of the actual People.cn website!

The main colours are a dark orange/red and two shades of more middling orange. The darker of the three is a lot lighter than the red of the China Eastern swallow tail logo and I think Aviation400 has nailed the colours on the model except for the swirly logo on the lower forward fuselage. This looks too light on the model and is using the wrong orange.

Positioning of the complex livery elements is superbly accurate. These include the Beijing skyline inside colour of the rear fuselage. The printing definition is also very good making the livery rendition really shine. The only other minor criticism I can level is that the small ‘People First’ text just above the wing is not a very bright white as it is on the real aircraft. 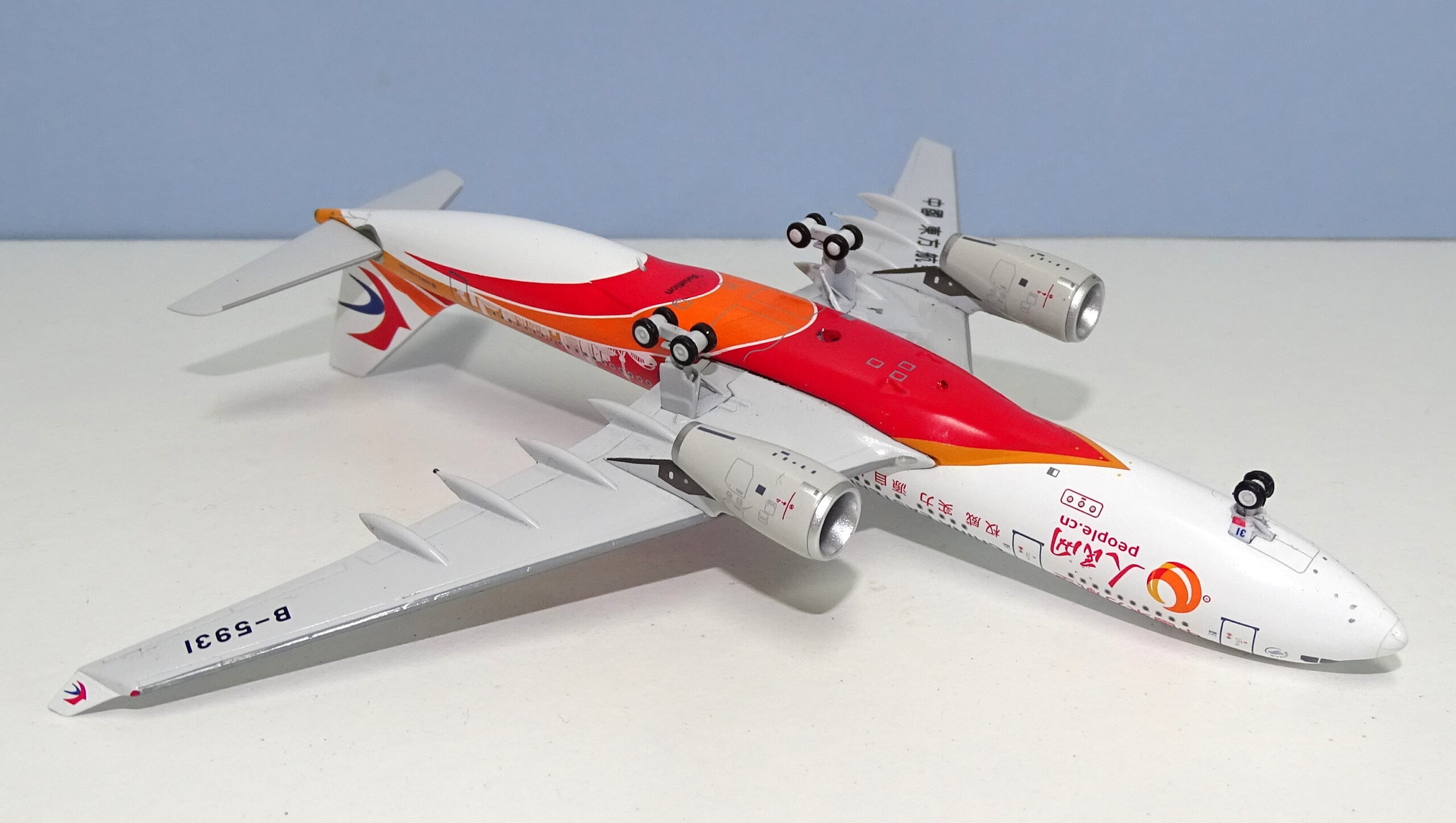 I’ve already complemented the printing and this fits up there with the best. It includes all the hallmarks of what printing should be like in 2020. There is a huge amount of small detailing on the fuselage, even in areas that you can’t easily see like the underside, plus a nosecone ring and engine panel lines.

Painting and construction of the multi-piece engines is excellent and the undercarriage is well fitted and rolls as expected. Unlike the last AV400 A330 I reviewed this one has perfect build quality, which is something of a triumph considering the number of aerials and domes fitted.

This model is a case of Aviation400 doing an excellent job of making a model but only having an average mould on which to create it. I will probably avoid collecting more AV400 A330s if I can help it, but the level of detail and quality bodes well for the military A330s that many people are eagerly awaiting (each of which come with a host of aerials, pods and booms). It is a decent model but shows that competition for A330s is so strong that despite its brilliance in printing, and success at reproducing a complex livery, there are other options which have better base material to work from.

The A321 threatens to do for Airbus what the A330 has done and enable them to monopolise a market segment until Boeing finally gets it act together and reacts. In this case Boeing has dithered […]