As the old saying goes ‘you wait an hour for a bus and then two turn up at once’ or in this case ‘you wait 20 years for a Dan Air HS 748 and then two turn up at once’. It was a major surprise that Gemini announced a pair of classic prop-liners in its February 2020 releases and for one of them to be a Dan Air HS 748 only weeks after Aeroclassics had also released one was a bonus. Thankfully they are not in the same livery either. Having reviewed the Aeroclassics example it seems only right to also look at the Gemini Jets.

The Hawker Siddeley 748, originally the Avro 748, was one of the last pioneering British civil aviation success stories, coming at a time when British jet development was taking something of a nosedive with the Trident and VC10, in great part thanks to the meddling of BEA and BOAC. It competed very favourably, in a strong competitive field, up against types such as the Fokker 27 Friendship, Nord 262, Handley page Herald and NAMC YS-11.

The raison d’etre of the HS 748 was that it was designed for operations from primitive airfields, that were commonplace throughout the world at the time. The HS 748 was rugged, simple to operate, reliable and had excellent STOL capabilities. Sales were usually in small numbers but to wide-range of airlines operating in challenging conditions. The HS 748 did however also see a lot of service in its home market and Dan Air would become a substantial operator throughout the 1970s and 80s.

This airframe actually started life in April 1963 when it was delivered to the regional independent UK airline BKS Air Transport. BKS focused on local scheduled and charter operations from its Newcastle base but gradually grew its operations at London Heathrow until it became its busiest destination. BKS operated a trio of HS 748s during the 1960s and this exact aircraft has actually already been represented in 1:400 scale by JC Wings in the livery of BKS (as part of a twinpack with a Britannia).

G-ARRW saw a lease to, the other great British HS 748 operator, Skyways Coach Air in 1967 and had joined them permanently by the time that Skyways successor Skyways International was acquired by Dan Air in 1972. Dan Air made extensive use of the Budgies on all manner of its routes from scheduled services, to the IGS network, to oil charters, to the Highlands and Islands routes.

This aircraft left the fleet in 1986 and switched to, what was at the time a small Irish regional operator, Ryanair as EI-BSE. By 1990 she was with the short-lived British Independent Airways and by November 1992 had been exported to Nepal, as 9N-ACM, for Necon Air. Her rough and tumble service operating in the Himalayas was cut short in November 1997 when she was damaged beyond repair in a runway overrun at Pokhara, Nepal. In the process of stopping ACM managed to hit another HS 748 of Nepal Airways but there were no fatalities among the 48 occupants. 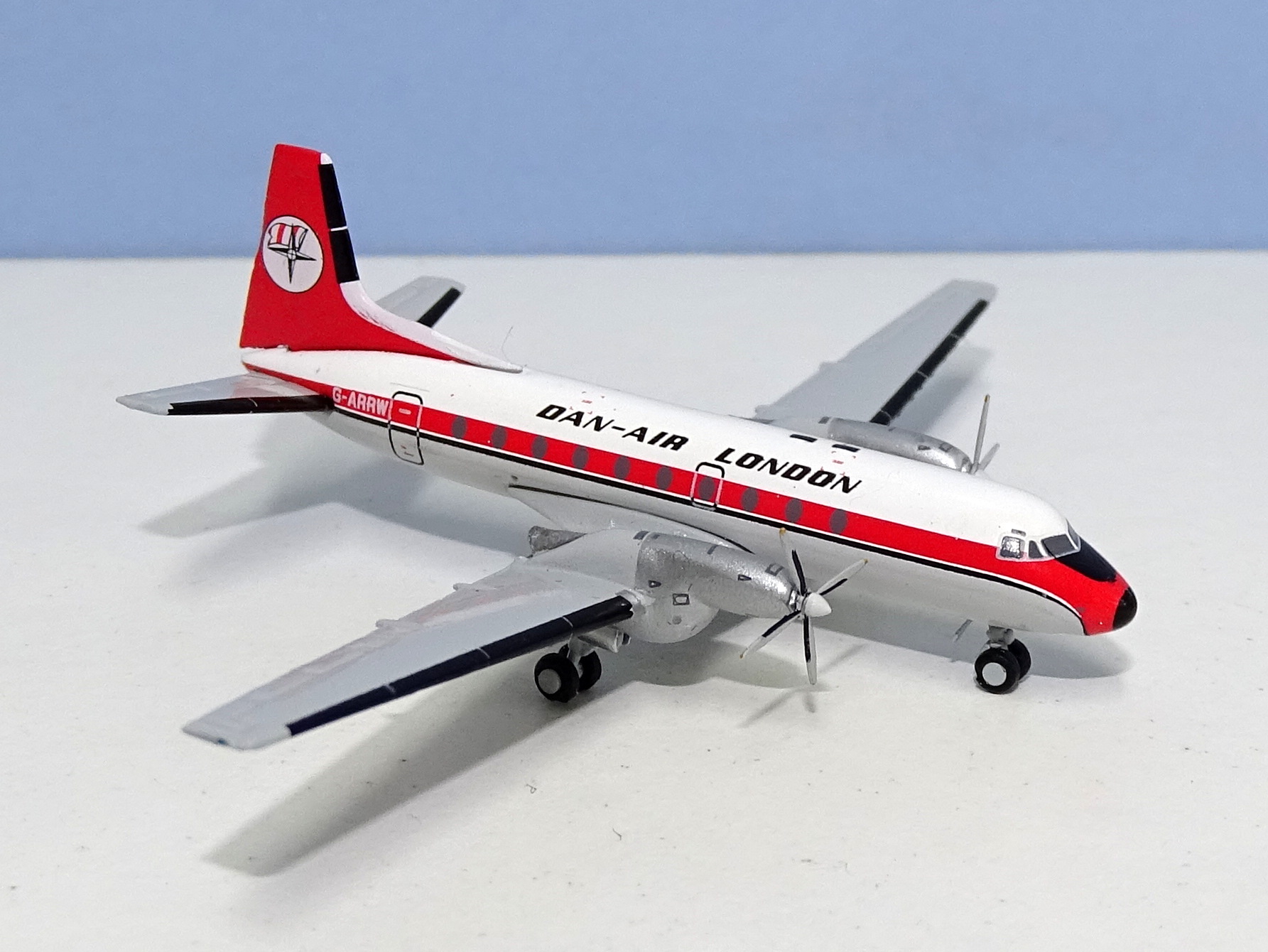 It is something of a quirk of the industry that there are two moulds in 1:400 scale for the HS 748, especially as it is classic, regional and non-American. Both moulds came out in 2009 and share a strong resemblance, as you’d hope if they were any good. The JC Wings / Gemini Jets mould has, perhaps unsurprisingly, seen a lot less usage than the Aeroclassics mould. Only 7 models have been made using it including this release. This is its first run-out since 2012!

The long holiday for the mould has not necessarily been a good thing as during the intervening period it has somehow lost its nosegear doors, which on an HS 748 are hardly a minor part. Also modified is the nosegear itself, which now has a larger tyre than previous releases. This is not an improvement as the new tyre is too large.

This model sits at a rather hot-rod stance but that is not a fault of the mould itself and more to do with the fitting of the maingear, which I’ll discuss later. The fuselage is good and very similar to the excellent Aeroclassics version. I think the Aeroclassics has a slightly better nosecone and forehead shape but there isn’t much in it. 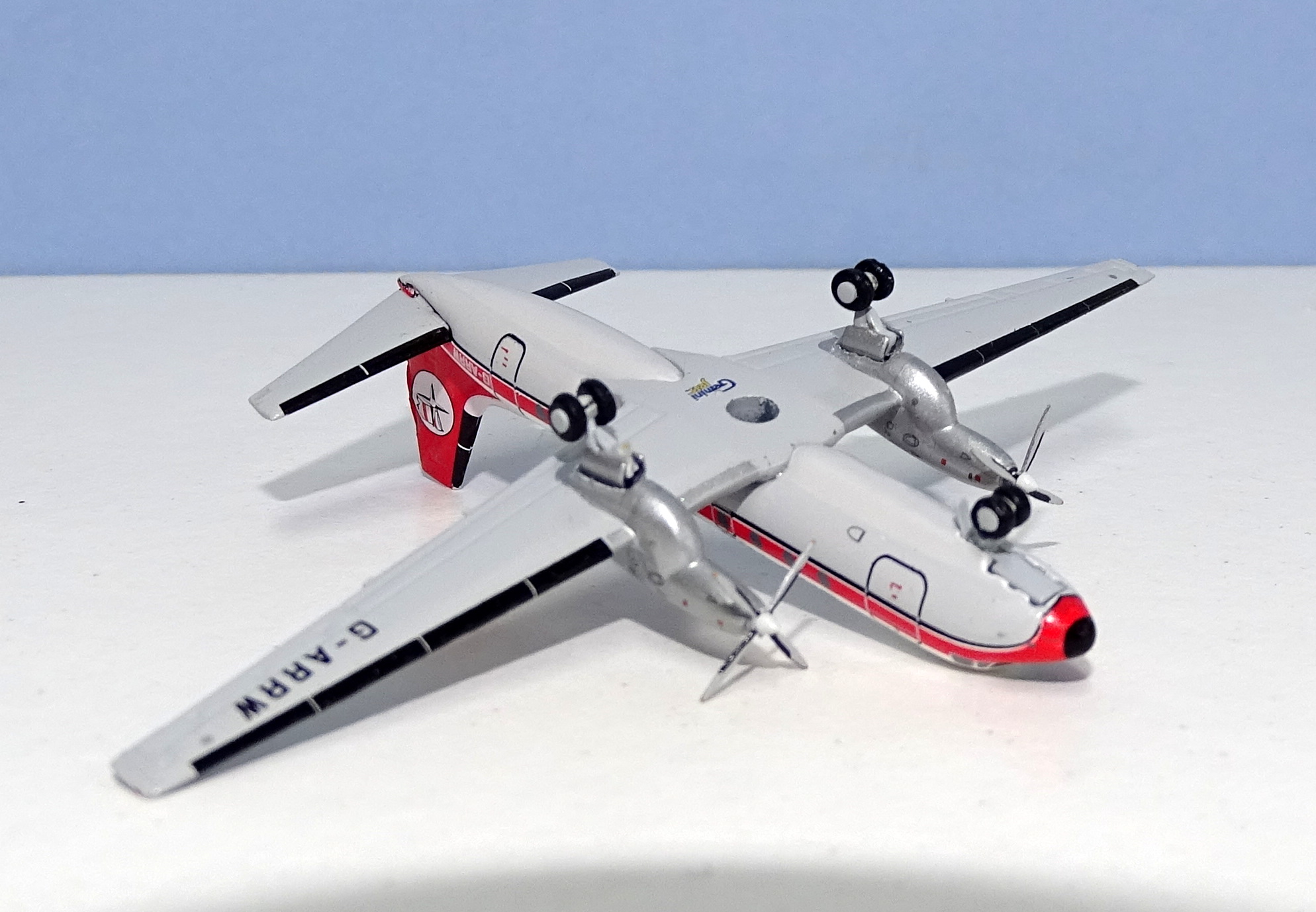 The wings attach to the fuselage as a cradle mount but the seamline follows the wing fairing edge, in exactly the same way as on the Aeroclassics mould. An area of superiority for the JC mould is the wings, which have a slightly stronger shape and better detailing than the Aeroclassics does. I also prefer the shape of the exhausts on the engines on this mould. They look like separate parts coming out of the rear of the nacelles, which is helped by some good paintwork.

As with the Aeroclassics version this mould has no aerials represented. This is a decent little mould that deserves greater usage. My BKS HS 748 is a compulsive tail-sitter but this Dan Air example does not, that could be however due to the fitting of the undercarriage. With the missing nosegear doors this is an equal of the Aeroclassics mould but without them it loses another point.

This model wears the 1970s Red and Black Dan Air livery rather than the red, white and blue version featured on the Aeroclassics release. The deep red and sharp black of this scheme are well represented on the model. The livery is quite simple and Gemini have done an excellent job. 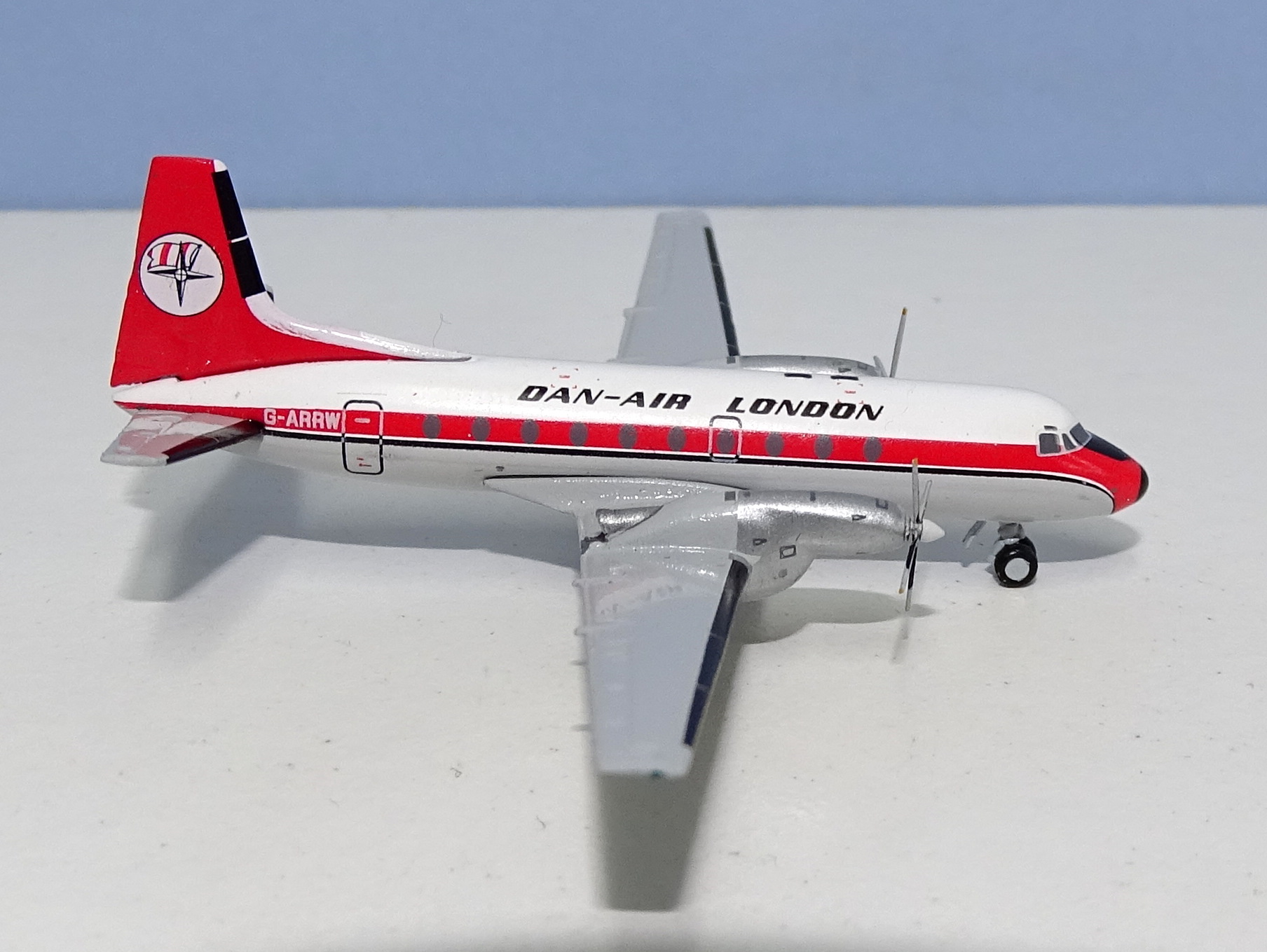 The Davies and Newman compass and flag tail logo is very finely printed, at least on the starboard side anyway. On the port side the logo is missing the middle detail. At least unlike the Aeroclassics version there are no underprinting issues present. The size and position of the tail logo are accurate. 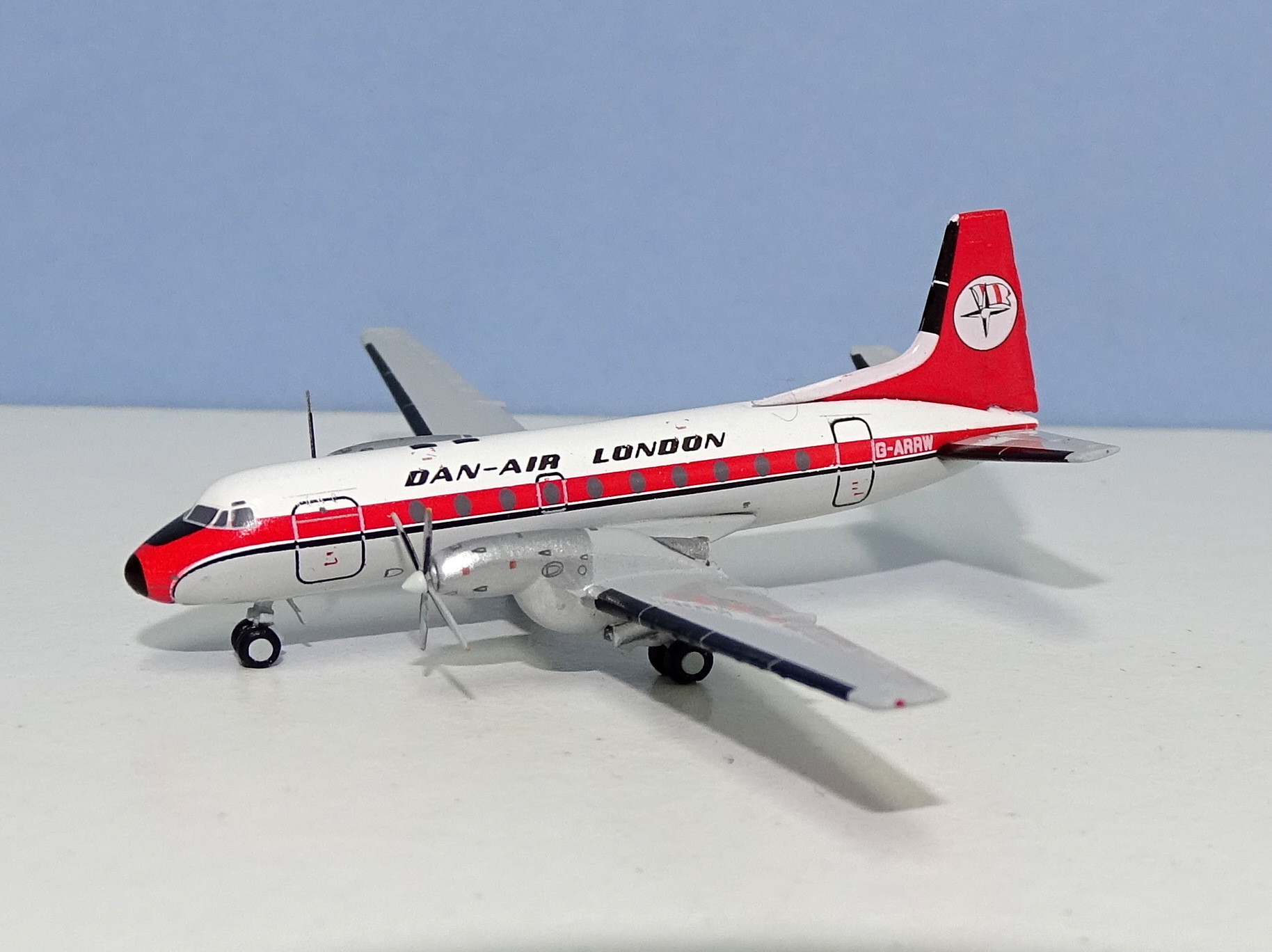 The rest of the scheme is picture perfect. The thin black cheatline understriping correctly thins at the nose and the shape and size of the radome and anti-glare are great.

The last element to check is the titles. They are nice and chunky, use the correct font and slope well. Overall, this is an excellent paint and livery job aside from the tail logo print on the left side. 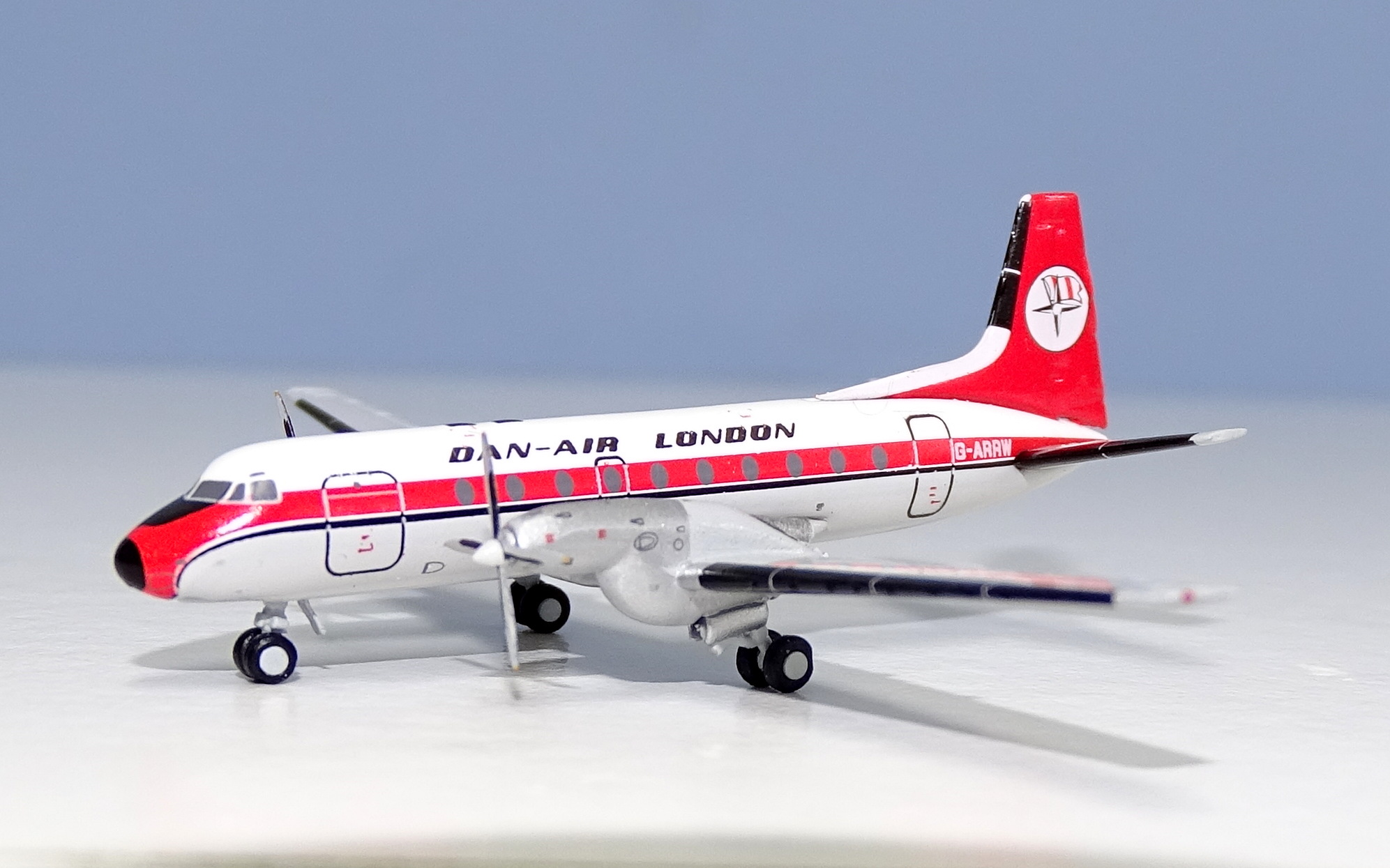 Printing on Gemini Jets models is nowadays very good and this tiny model shows crisp and fine detailing all over it. Comparing with the Aeroclassics Dan Air HS 748 Gemini have worked harder on printing where it matters. They go into extreme detail, capturing things like the hinges on the top of the L1 cargo door. The biggest difference are the engines and props. On the Aeroclassics they are a uniform silver but the Gemini model correctly has grey painted rears to the nacelles and plenty of other printed detailing.

The paint and colour of the prop blades is also much superior on the Gemini model except that the Aeroclassics correctly has the prop tips coloured yellow and the Gemini does not.

From a distance the quality control on this model looks fine but in close-up shots it is obvious the aircraft has a nose-down hot-rod style appearance to it. This is not a product of the mould itself but is due to the maingear not being fitted properly. The maingear legs are simply not pushed in enough, making the model tail high. The nosegear is also slightly pushed forward. Ironically this mistake does mean the aircraft doesn’t tail-sit and it is only noticeable when you get really close, however it is incorrect.

I am happy to see Gemini Jets returning to their pre-GFC ways with a wider variety of releases. I can only hope this Covid-19 mess doesn’t impact that pattern, although I suspect it will. This is a lovely choice for a model and a good rendition of a 1970s Dan Air HS 748. Now if they can just find the nosegear doors, print both tail logos well and fit the maingear properly then they’d be getting an impressive 28. Even so this model is a pleasure to add to the collection.

As 2019 moves into its last quarter there aren’t many major airlines that haven’t made their re-equipment choice between the Boeing 787 or Airbus A350. Of course, if you are one of the Chinese majors […]

Piston liner or turboprop releases from JC Wings are nowadays rare as hen’s teeth, aside from the occasional ATR, so it is no surprise that this Electra dates all the way from back in 2008. […]