The A330neo has taken the place of the smaller A350-800 as the competitor to the 787 at the lower end of the market, which is somewhat ironic considering the original A350 was just a warmed over A330 anyway. Sales have been relatively slow but 337 have been ordered (95% the larger series 900s) and 46 had been delivered prior to the Covid crisis. There is little doubt that the A330neo will become a hot subject in 1:400 scale and currently it is Phoenix vs JC Wings.

Despite a questionable history of crashes Lion Air has been able to ride the boom in cheap travel, enabled by industry liberalization, to become one of the world’s most important low-cost carriers. Inside Indonesia it has regional (Wings Air) and full service (Batik Air) subsidiaries and it has also expanded internationally to create subsidiaries in Thailand and Malaysia.

One area that Lion has stayed away from, unlike the competing AirAsia, is the standard long-haul low-cost market. That isn’t to say it hasn’t operated widebody aircraft but those it has had have been primarily focused at servicing the need presented by the massive Indonesian Muslim community undertaking pilgrimages to holy sites in Saudi Arabia. These services began in 2009 with the acquisition of a pair of 1989 build ex-Singapore Airlines Boeing 747-412s.

Lion’s next move in the long-haul market was an order for 5 Boeing 787s, destined for its Batik Air subsidiary, but all five of these were cancelled in 2014 and replaced with 737s. Since then Lion has established a good relationship with Airbus and in July 2018 it ordered four A330-900s, leapfrogging its competitor AirAsia X as the launch customer for the type in Asia. By that time, it was already operating a trio of A330-300s, which had arrived in late 2015.

Lion received its first A330-900neo, leased from BOC Aviation, in July 2019 and the type enabled the retirement of the last 747. The order for the neo has been topped up since with 10 aircraft now scheduled for arrival. The first two went to Lion Air and the second pair to its subsidiary Thai Lion Air. The Indonesian examples are fitted in a 436 seat all economy layout whilst the Thai examples are in a less dense two-class layout.

The differing layouts illustrate the different uses the type will be put to. Thai Lion Air wants to use the A330neos for flights to North-East Asia and then long-haul services to Europe whilst Lion Air itself is focusing them firmly on the pilgrimage routes to Saudi Arabia. Initial routes will include Makassar and Surabaya to Medina and Balikpapan and Solo to Jeddah.

The outstanding economics, existing A330 familiarity and relatively low purchase price of the A330neo makes it an excellent fit for Lion Air. The neos are certainly an impressive counterpoint to the way pilgrimage services used to be flown where Garuda and others would lease in older aircraft temporarily for the routes. They illustrate the increasing maturity of aviation in Indonesia.

This is the second A330neo of JC Wings that I have reviewed and last time round I gave this mould a ten. That was perhaps a little overzealous as, now I look at this, I can see the wing height issues that have afflicted JC Wings A330s have not been fully resolved. So ‘mea culpa’ for that dear readers. Nonetheless this is still a good mould and preferred by me over the Phoenix example.

Unlike the Phoenix A330neo the JC Wings version does not share the same moulding as the A330ceo and this has given JC Wings the opportunity to improve the A330 fuselage significantly, which frankly is what it needed. The nosecone is now pointier and the nosegear position has been moved slightly forward to its correct location. This dramatically improves the mould in my opinion. 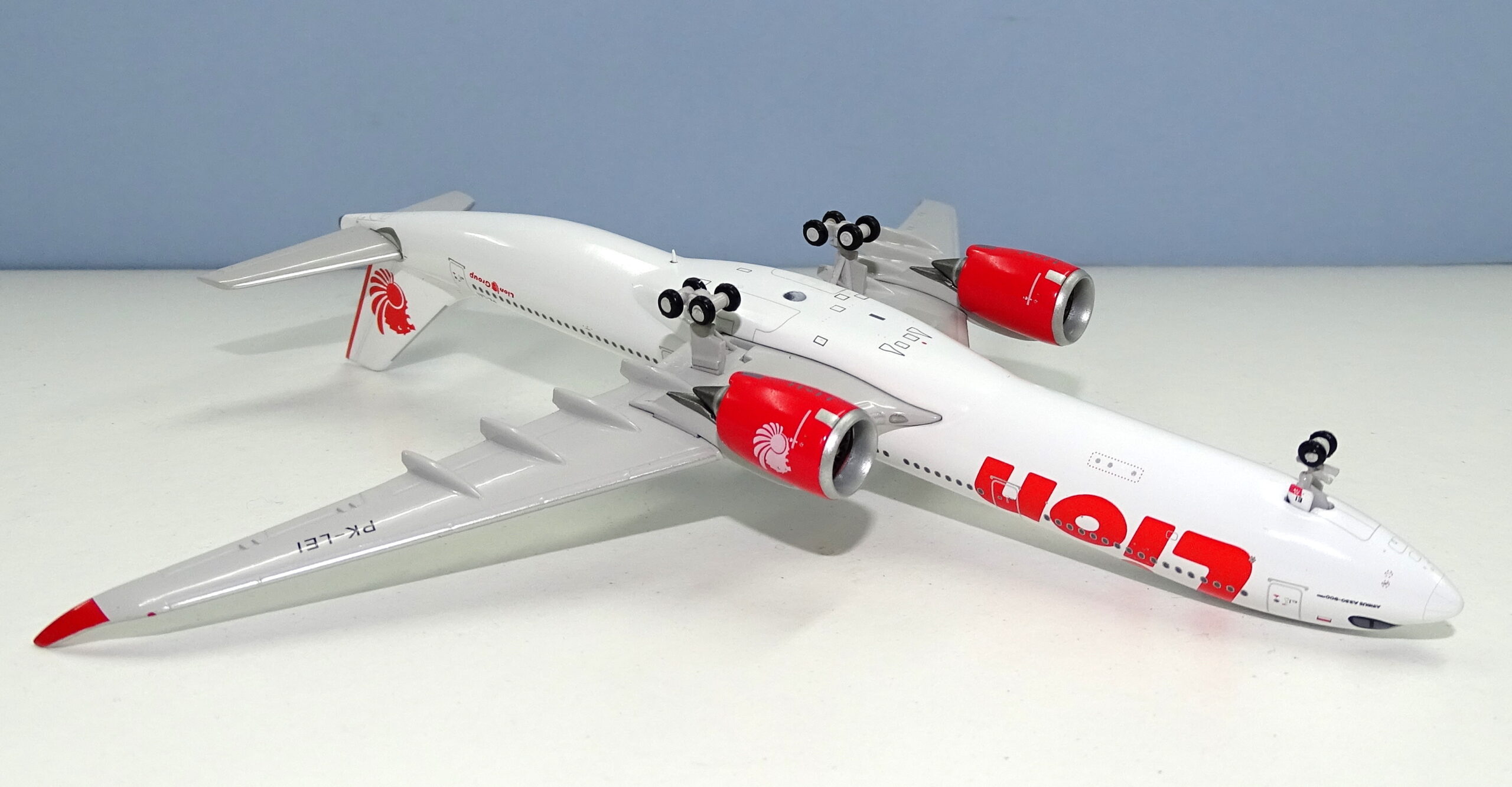 The rest of the fuselage is very good, as it was on the original A330-300 mould. The neo’s underside looks simplified compared to the ceo and on the new mould JC Wings have decided to print on the scoops and inlets rather than have them in relief as on the older mould. It doesn’t impact the mould’s quality.

The wing join and complex fairing are excellent and the mould doesn’t have the same issues that JC A330s have had with odd wing angles, instead it has a different one. It was the case that JC once had major problems fitting the wings to their Airbus line, but that have been resolved. This mould does however appear to have wings that are too high at their tips. This doesn’t spring from the fit with the fuselage, which was the old problem, and it looks like there is an angle change at the engines that leads to the tips ending up too high. If it followed the original line it would be a perfect angle. 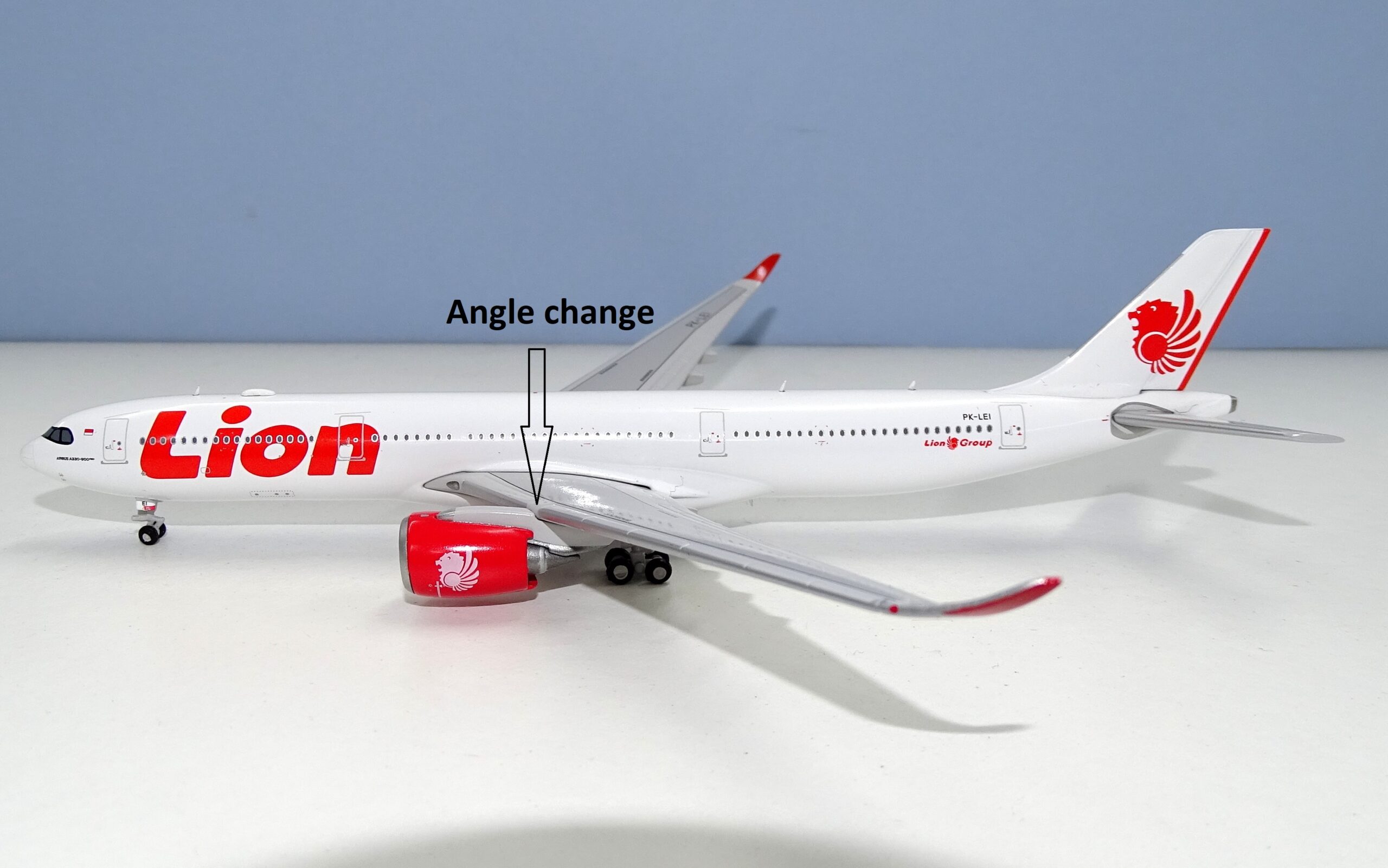 The Phoenix mould has almost flat wings, which is actually a trait of several Phoenix moulds. They are more accurate but aside from this I think the JC version is better. Phoenix can barely put a model together and their A330neo uses the old A330 fuselage, which means it gets the same old undercarriage, often poor wing fit and other issues. Not to mention that the printing on Phoenix models is much inferior to that offered by JC. Looking at images of this model made by Phoenix and it has an odd look not helped by some less than great cockpit printing. 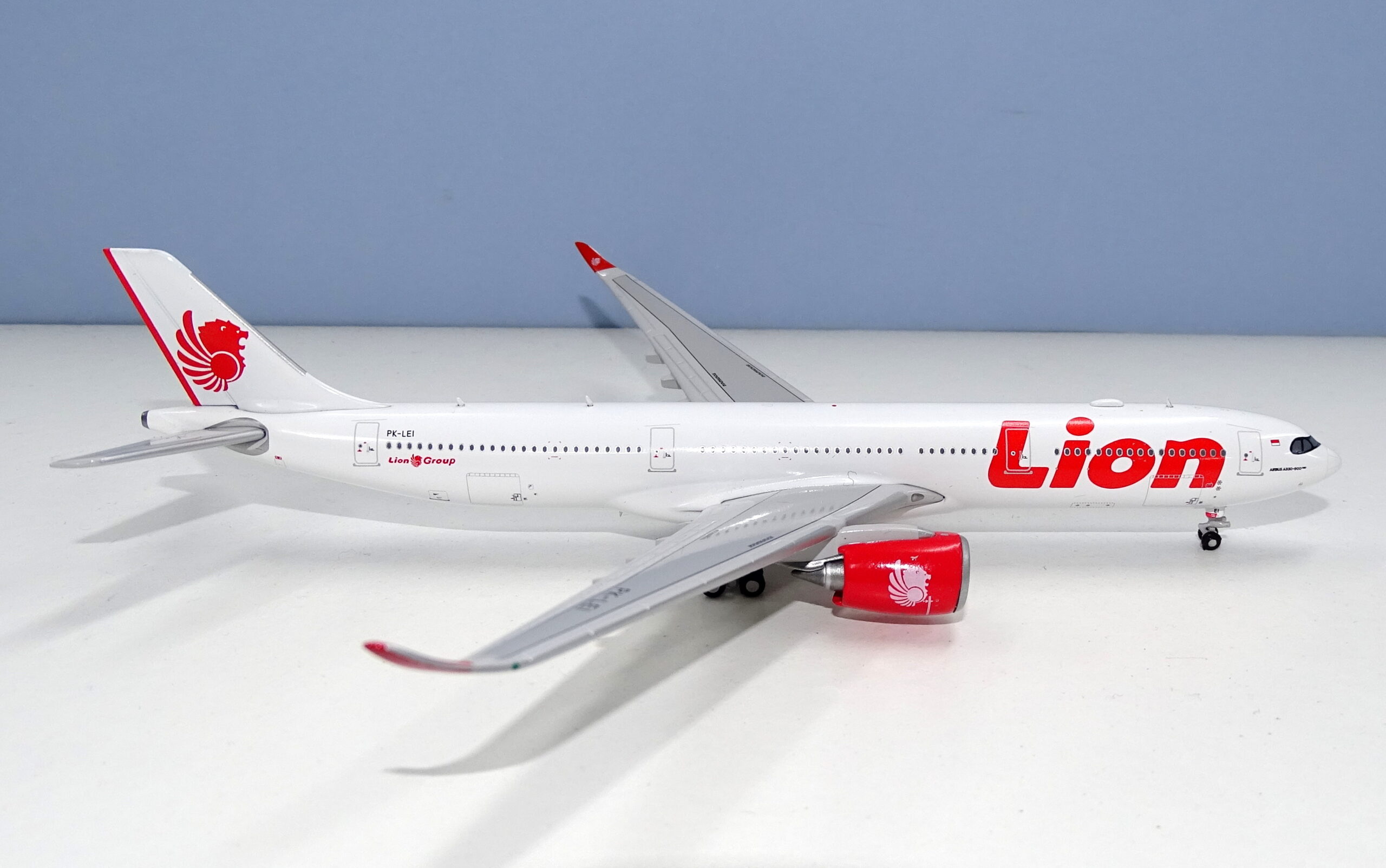 Of course, with a neo, as with the A320neo, it is the engines that are the biggest change since the new Trents are huge. The new engine mould and pylons are excellently shaped and fitted. The engines have plenty of ground clearance, which is helped by JC having increased the height of the landing gear (another peeve I had with their ceo A330 mould, which they’ve resolved). The engine fans are well detailed and revolve. It is a rather useless feature but competes well against Phoenix who first had the idea.

The model has four aerials (3 up top and one below) and the small dome forward ahead of the wing. Only the smallest aerial forward of the wing on the underside is lacking.

Overall, this A330-941N is a major improvement over the JC Wings A330-300 and another example of how JC Wings are willing to try to improve their moulds, which is in contrast to Phoenix who look like they have basically just updated their A330ceo mould to make a neo. Whether you discount this mould due to the wing height is your decision but aside from that it is in my opinion a better model than the Phoenix. 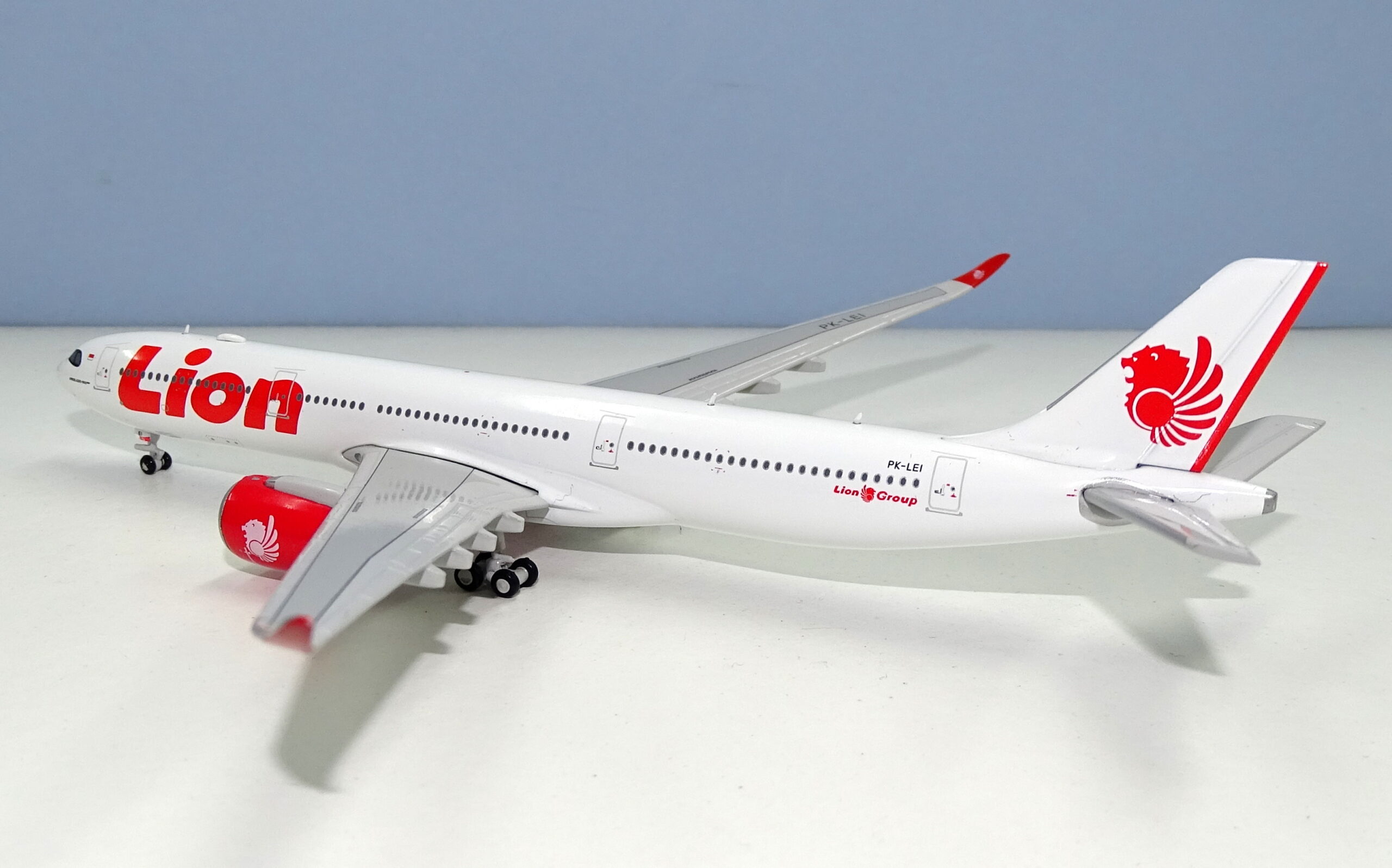 The Lion Air livery is simplicity itself. It features only two colours: red and white, which by no accident match Indonesia’s incredibly boring flag. It’s a classic modern Eurowhite scheme with billboard titles, painted engines and a tail logo. Hard to get wrong on a model really and JC Wings make no mistakes.

The red is a nice shade. The winged lion logo on the tail is very nicely detailed and the shape of the, actually quite complex, mane and muzzle are perfect. This is recreated, albeit in white, on the engines and on the inside of the winglets.

The rest of the livery basically constitutes the Lion Group logo, Indonesian flag and cockpit mask. I can’t see any issues so it’s an easy full mark score.

Printing of JC Wings models is, in my opinion, more detailed than that of Phoenix and on par with that of Panda and NG Models. Unlike on the last A330neo I reviewed the maingear outlines have been added and there is plenty of great detail. Still missing is the strong outline around the body/wing fairing. This latter point is something regularly missed off, perhaps because the manufacturers don’t want collectors to think they are using a cradle mould?

Construction quality on this model is very good. In macro photos there are a couple of tiny notches on the small rooftop dome but these are very hard to see with the naked eye.

I like this model even with the wing issue, which doesn’t stand out to me dramatically.  I can’t see A330neos featuring heavily in my fleet until the Chinese majors start buying them but if they were going to this is the mould I would choose.

With the recent announcement that A380 production will cease in 2021 it seems fitting that I should review an A380 in 1:400 scale, and in fact the first A380 delivered. Despite its lack of sales […]