Aviation history is rich with important airlines that are nowadays considered so obscure few enthusiasts, fixated on Airbus and Boeing 787s, have heard of them. In 1:400 scale Aeroclassics is the last bastion of releases covering these classics and although the past few years have seen a downturn in quality from them they are still more than capable of producing excellent models and regularly announce superb choices. May was a bumper month despite the new MAXs and included this TAI DC-8. 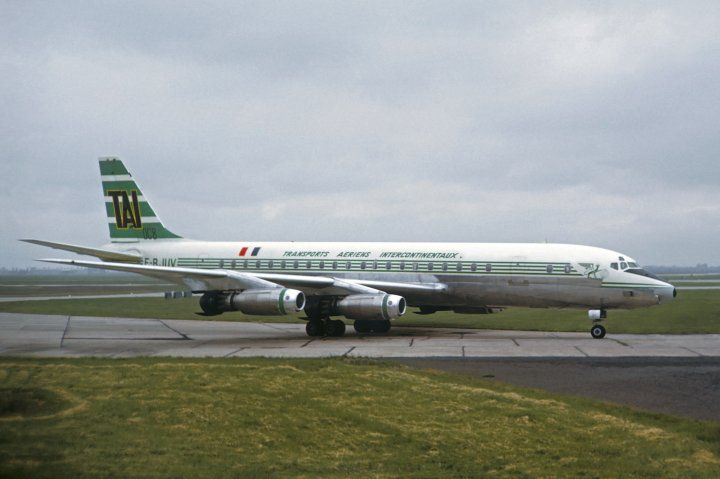 Unlike in the United Kingdom France during the 1950s had a pair of independent airlines that were not restricted to government contract and other charter work but could operate scheduled international services alongside the national carrier Air France. One of these was Transports Aériens Intercontinentaux (TAI).

TAI built its postwar fleet around Douglas products although it did in December 1952 accept four of the unsuccessful French long-range airliner the SNCASE S.E.210 Armagnac. This large and impressive airliner unfortunately proved uneconomic and after 8 months TAI returned to its trusty Douglas products.

With the jet age looming TAI had just the sort of network suited to the new aircraft – a variety of long prestigious multi-stop routes to Africa, Asia and even into the South Pacific connecting France with exotic destinations such as Noumea, Tahiti and Bora Bora; in addition to Auckland, Brisbane and Darwin. 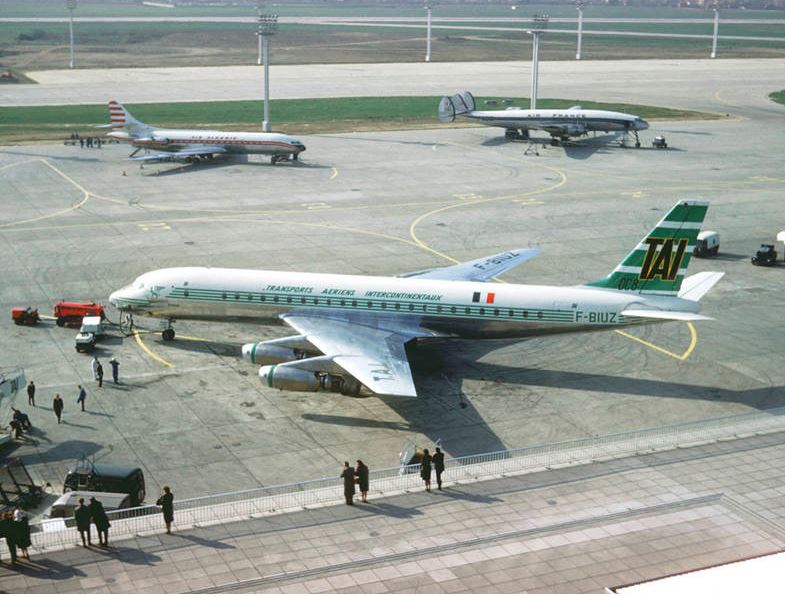 Unsurprisingly given its fleet preferences TAI ordered the new Douglas DC-8 – choosing the intercontinental series 30 version. Three aircraft were delivered with F-BIUY being the first to arrive on July 31, 1960. She was subsequently followed by F-VIUZ in February 1961 and F-BJUV in June.

The DC-8 opened for TAI what was at the time the type’s longest route connecting Paris to Fiji, via Los Angeles where it connected with Air France’s Boeing 707 service covering the other side of the globe back to Paris.

As early as September 1961 it was decided that TAI would be stronger if it combined together with another French long haul independent, Union Aéromaritime de Transport (UAT) to form a second force airline – similar in concept to that which in England would become British Caledonian more than a decade later. The two airlines already had strong commercial ties and both operated the Douglas DC-8.

On October 1, 1963 they were officially merged and the new airline took up the name Union de Transports Aériens (UTA). The three TAI DC-8s transitioned to the new airline joining UAT’s three DC-8s. UTA had a strong relationship with Air Afrique and F-BIUY saw service with the African airline for three years between September 1965 and June 1968. In March 1973 she was sold to TAE of Spain as EC-CCN. She saw a decade of service with TAE and was withdrawn in May 1983.

It has been just over a year since I reviewed an early DC-8 and the mould remains essentially unchanged. This is a good thing since the standard DC-8 mould is very, very good and even more so when compared to the obsolete old Gemini DC-8 mould with the thick wings and ugly giant undercarriage. There are no complaints for me regarding fuselage or control surface shape.

The early DC-8-10/20/30/40s had either Pratt & Whitney turbojets or Rolls Royce turbofan engines. To cater for the enormous sound of the engines and improve reverse thrust Douglas developed a special noise suppressor system for the engines, which involved a daisy shaped silencer on the back of the engine and a moveable noise suppression ring / ejector sleeve that slid aft of the engine for takeoff and landing.

Aeroclassics developed this mould from their DC-8-50 with new engine pylons and engines with a moveable ejector sleeve, allowing the model to appear with them deployed or retracted. It’s a good feature and surprisingly I’ve never had an issue with them coming free, although when deployed far back they do sometimes hang rather poorly.

The weaknesses of the mould are inconsequential to its overall appeal. They relate to the wing/fuselage seam join, angle of the engines to each other, lack of the DC-8s single forward antennae and the usual simple Aeroclassics tyre hubs. In general this is a fabulous mould and hard to seriously fault.

TAI had an interesting green livery with thick green striping on the tail, green pin stripes along the fuselage and the company’s proud griffin logo just ahead of the passenger entry door forward. The green would survive in the combined UTA in the new airline’s doors.

Aeroclassics green is quite dark, maybe slightly too dark but it is close enough for my eye. The yellow outline around the TAI initials on the tail is present but it doesn’t pop as much as it does in the photos, in fact under close inspection it may actually be gold on the model. The fuselage pin stripes are well positioned and I really like the griffin logo with its front paw firmly on the globe.

Other small details of the livery are also well represented such as the tiny UY on the nosegear doors and the green bands around the engine nacelles. Even so there are some minor errors in application here and there. The French flag on the rear fuselage is not tall enough and the anti-glare mask ahead of the cockpit is the wrong shape.

On the model it is circular and finishes well above the pin stripes but on the real thing it is a more angular triangle shape and reaches down to the nosecone. More positively the airline initials and aircraft registration are on the wings but once again a lack of attention to detail has seen the full stops between the TAI initials missed out. The errors are all minor but add up to the loss of a few points for me. 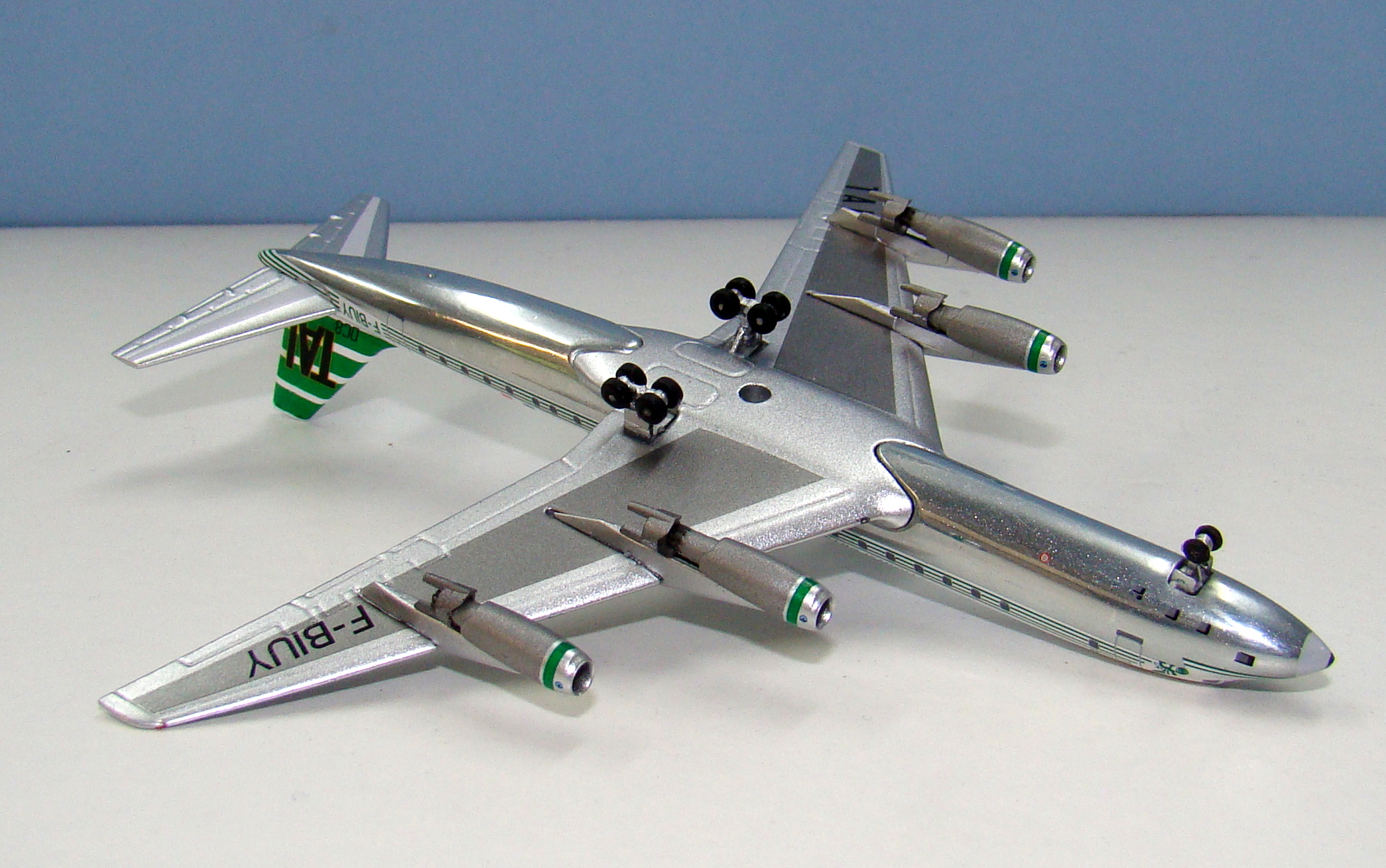 The fineness of the printing on this model is good even under a magnifying glass. This model also has a large silver belly which looks fabulous. Extra print details are few but they cover all the bases you’d expect with tiny engine manufacturer logos on the nacelles a nice touch. Less nice is the wavy poorly defined top to the uppermost green stripe on the tailfin port side and the minor scratch in the same place on the starboard side.

Construction of the model is good and I rarely have issues with Aeroclassics DC-8s. The only point of issue is that the ejector sleeve on the outboard port engine does not fit as snugly as the other three do – nothing major.

There aren’t many Aeroclassics DC-8s that I don’t have an interest in acquiring and this is one that has been requested for sometime by hardcore classics collectors. It is a very worthy addition to the Aeroclassics stable but yet again whomever is designing the liveries for these models needs to make better use of the internet. It took me only a few minutes to find multiple images of TAI DC-8s with which to identify key characters of this livery and yet clearly the person doing the design did not do this. The faults are all individually quite minor and so don’t harm the model materially too much but still a little bit of extra care would go a long way.

There are plenty of older Aeroclassics models that are very hard to find and fetch high prices. Two of these are the Indian Airlines A300s released in 2007, one of which was a Hangar Club […]

Collecting model airliners is a lot more fun with model airports and if you have a diorama or flughafen you are going to need ground service equipment (GSE) to make it look half realistic. GSE […]

The Airbus A330 has built up a commanding order backlog amongst the Chinese airlines and its flexibility meant that by 2016 Boeing’s share of the intercontinental Chinese traffic was down to only 30%. Fortunately for […]