It is rare that it is possible to say that you have purchased 2/3 of an entire manufacturer’s output for a given year but seeing as this is the enigmatic Bigbird Mk3 and they literally produced 3 models in 2018 it isn’t too hard. It is hard to say whether they are just constrained by JC Wings production issues (the models are made by JC for BigBird) or whether BigBird itself is at fault, but the lead time for models (this one was announced about a year before it was released) and the number of actual announcements make it hard to take Bigbird seriously in 1:400. Even so what they do produce is usually pretty good and there are very few 747s made in 1:400 nowadays.

Canadian Airlines International was formed on March 27, 1987 when the PWA Corporation acquired the assets of Canadian Pacific and merged them with its own airline Pacific Western. Along with Nordair, EPA and Wardair the result was a seemingly strong contender against Air Canada. Unfortunately, few of these airlines had been particularly profitable and the economy towards the end of the 1980s did not bode well for the new airline.

The impact of the Iraqi invasion of Kuwait and the resulting downturn in traffic and increase in fuel prices came at a time when Canadian was trying to establish itself as a combined airline and renew its fleet with 767s and 747s. Canadian had ordered four Boeing 747-400s for its long-haul Pacific network but by 1991 the airline was in such a poor financial shape that Air Canada was proposing to purchase Canadian’s international routes.

Cost and route cutting at Canadian allowed losses to decrease and the fourth 747 was accepted as C-FBCA on April 22, 1992. The trio of 747s were used almost exclusively on the Vancouver to Hong Kong and Vancouver to Tokyo Narita routes, however for about a fortnight they did see service on domestic routes for pilot training purposes and during their proper careers served the tag-on Vancouver to Toronto leg of the Tokyo service.

At times the 747s could also be seen on services to Bangkok, Honolulu and Taipei but they never made it across the Atlantic in Canadian colours. Canadian would continue to struggle and the Asian economic crisis of 1998 hurt its profitable Pacific routes. Eventually after a protracted struggle it was acquired by Air Canada in 2001 and the 747s wore the maple leaf thereafter. C-FBCA was sold on in September 2002 and subsequently served with Aerolineas Argentinas, and later Aerosur, on lease from Pegasus Aviation. She was broken up in 2012.

As with the 747-200 from the first BigBird this mould dates all the way from 2003 and like that mould the models made are hard to find and tend to change hands for exorbitant amounts of money. In 2006 BigBird was replaced by the inferior BigBird Mk2 who had a copy of the mould which although looking similar had inferior and too short undercarriage. The sudden reappearance of Bigbird Mk3 signalled the return of the original mould from whatever purgatory it was in but sadly this is only the third 747-400 they have made (and one of those was a 400D with no winglets).

BigBird’s inability to get more models made is a crying shame as the alternative 747-400s are either some of the worst moulds in this scale (hello Phoenix) or fine but not great (Gemini and JC Wings own mould). JC Wings are making a new mould but when this will appear is as usual with JC a really unclear question. This Big Bird Mark 1 is spectacularly good and shares most of the great features of the 747-200. 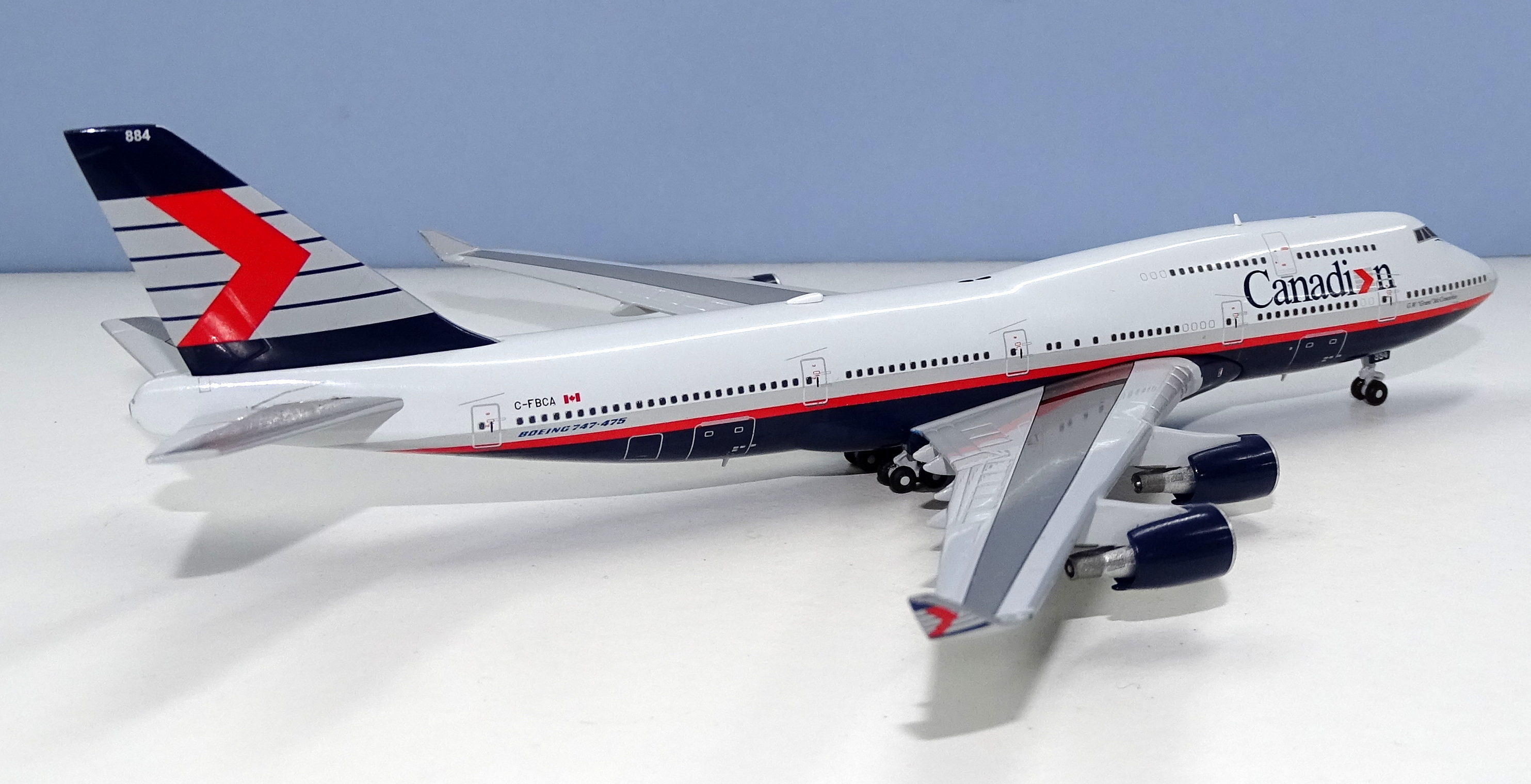 It has a great fuselage shape, plus comes with very finely done landing gear and long fine wingtip HF aerials. The engine pylon join is fine as is the vertical stabiliser fit so this mould is undoubtedly superior to the earlier Gemini and Dragon moulds. A particularly nice area is the APU exhaust in the tailcone.

Issues with the mould are hard to find. The only real compromise is that it is a cradle mould and so has a seam. At this point in time literally nobody was making seamless moulds, aside from Dragon, and the seam is tastefully done running around the natural fuselage/wing join bulge. With a dark bottomed livery like this Canadian has the seam line becomes a total irrelevance.

BigBird have taken the opportunity to sensitively update the mould with aerials and a small dome – all on the fuselage roof. It is therefore missing the two smaller aerials on the underside, however adding aerials is a nice touch and they are well sized and shaped.

Pleasingly unlike the recent debacle JC Wings managed with the Witty Tristar mould Big Bird have not thought to muck about with the excellent original mould undercarriage even though it does not have rolling wheels. I am very grateful to that as the original landing gear is perfectly fine and unlikely to be bettered by annoying rolling tyres and the resulting mis-shaped gear legs.

Canadian Pacific was one of the first airlines to embrace, what became something of a trend, probably started by British Airways with their Landor livery, towards a more business focused livery. When PWA merged itself and the other regionals into CP it refocused the new scheme around the new Canadian Airlines name. This kept most of the last CP scheme but replaced the new Motion mark with a boxed chevron logo that could be cleverly used to avoid the English/French spelling difference in the word Canadian. The result was one of the better business schemes of the period.

The livery consisted of four colours: light grey, dark grey, navy blue and red. It is one of those schemes that can look wildly different in photos based upon the lighting condition at the time. BigBird has gone down the path of a very dark blue and quite light greys. Compared to the Inflight200 release of the same aircraft none of the colours match.

I think that the Blue is actually quite close to most photos (perhaps slightly too dark), however the dark grey stripe above it is much too light and the lighter grey is also too light. It is interesting as there are photos I have seen that match the BigBird colour choices but overall I think they have errored here. Ironically, I think I prefer the version on show here but it isn’t accurate.

Where BigBird have not errored is the placement of the livery components. The cheatlines and logos are well placed across the board. The thin elegant title font is especially well reproduced. When I first looked at the model I thought that the winglet printing was off as the logo points a little upwards. Checking photos shows that this is in fact the correct orientation so it’s not a problem.

The colour mistake on this model is not a killer, although I do admit that it does make the model look a little strange when it is sat next to another wearing the same scheme.

Being made in the JC Wings factory you expect strong printing and as with the Cathay 747 I reviewed last year it is impressive. Often dark colours obscure printing detail but this model looks a million dollars. Especially well printed are the noseone markings and cockpit.

Production quality is very good. There are no rolling models to contend with but the inner bogies of the maingear do move very well. The landing gear is immaculate. The aerials are well placed and the small comms dome aft of the wing on the roofline is one of the best I have seen in terms of attachment. The only fault from a build perspective is that the outboard port engine is mounted at a slightly odd angle. It doesn’t stick out too much and I’m not going to risk the model by trying to alter it.

The BigBird releases are really very good and if not for the colour issues on this model we’d be looking at a near perfect score. Sadly, it seems unlikely that they will ever be produced in enough diversity to make a dent in 1:400 like they did way back in the early 2000s. The result is that collectors are still calling for NG Models and such to make a 747, even though JC Wings are themselves making one (they also suffer from the same issue as BigBird but to a lesser degree). With the Jumbo reaching the end of the road in real service I hope that somehow we can start getting the models we deserve and in my opinion that would best be served on existing excellent moulds, such as this one.

Gemini Jets has announced its September lineup of 18 new diecast model aircraft releases. This month brings several new models which will certainly be popular. Highlights for the 1:400 scale releases include the release of […]