There are a lot of older model releases made at the dawn of the 1:400 era, which need re-releases on modern moulds benefitting from the superior printing of 2019. Many of these are older Gemini Jets such as their DC-10. I have had a Gemini Jets chrome version of a Hawaiian DC-10 for many years, and it is a fine model for its time, but in comparison to newer models it is showing its age. Whilst NG Models can do the Tristars and 757s, Aeroclassics has the best 707s, 737-200, DC-8 and DC-10s in the scale.

Like many US airlines Hawaiian really struggled to come to terms with how to operate in a deregulated environment. The decade long expansion begun in 1983, that turned the airline into a widebody operator using Honolulu as a mid-Pacific hub for a West Coast and South Pacific operation, was a massively expensive failure. So much money was lost that it is surprising that a chapter 11 bankruptcy filing could be postponed until September 21, 1993.

The resulting agreement with American Airlines that allowed an exit from bankruptcy on September 12, 1994 created a radically different Hawaiian Airlines. The new carrier was aligned closely with American using its frequent flyer AAdvantage programme, SABRE computer reservations systems and AA’s maintenance facilities. Outwardly however it was the adoption of the McDonnell Douglas DC-10, in place of the Lockheed Tristars, that most obviously signified the changes and the AA connection.

The DC-10s had a roomier interior fit-out and, due to the AA connection, were a lot cheaper to operate than the L-1011s. They were used on the slimmed down West-Coast network and began to join the fleet in February 1994, allowing for a swift retirement of the Tristars. Of the 23 DC-10s that Hawaiian would go on to operate during the 1990s all but two would be the shorter-ranged DC-10-10, and all would be leased from American Airlines.

N153AA was a 1972 build DC-10-10 that was delivered new to National Airlines on October 19 as N66NA and named ‘Shirley’. She transitioned over to the Pan Am fleet as ‘Clipper Sirius’, when they made the mistake of acquiring National, and was purchased by American on July 22, 1984 whereupon she became N153AA. She joined Hawaiian on August 29, 1994 and was named ‘Maui – the Valley Isle’.

The changes Hawaiian made following bankruptcy allowed it to post strong profits by the late 90s. In 1998 for example it posted record operating results with a profit of $8.2 million. These results gave the airline confidence to embark on a re-equipment plan with Boeing 717s and 767-300s, the latter to replace the DC-10s. The first 767s arrived in late 2001 and N153AA was returned to American and stored on October 15, 2002. She was subsequently purchased by Federal Express, converted to a freighter and upgraded to MD-10-10F status as N554FE ‘Brett’. She was finally retired in December 2016.

The Aeroclassics DC-10 mould is one of their finest mouldings and arguably the best DC-10 ever produced in 1:400 scale. See my DC-10 mould review for a more detailed comparison. The shape of the nose and fuselage is effectively perfect whilst the wings and engine pylon/nacelle combination are also top quality. Having said that as this is a DC-10-10 the wings ought to be about 4mm shorter than a DC-10-30 in 1:400. Aeroclassics reuses the DC-10-30 wings. It is forgivable but not ideal. 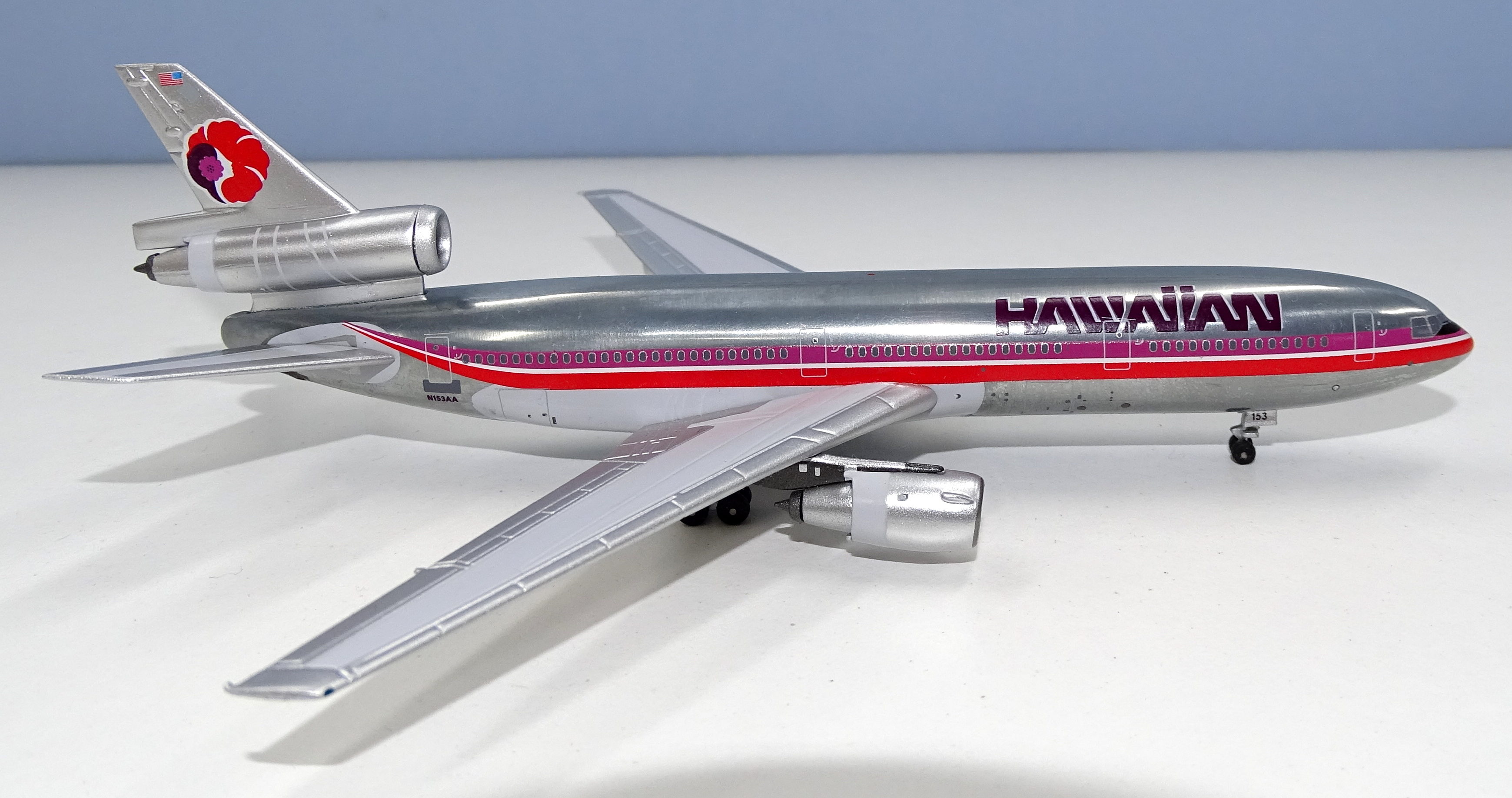 The nosegear on Aeroclassics DC-10s comes separated in a little bag so as to avoid breakages during posting. This is great but you do have to pay attention to fit it correctly since neither the gear doors or gear leg is symmetrical. 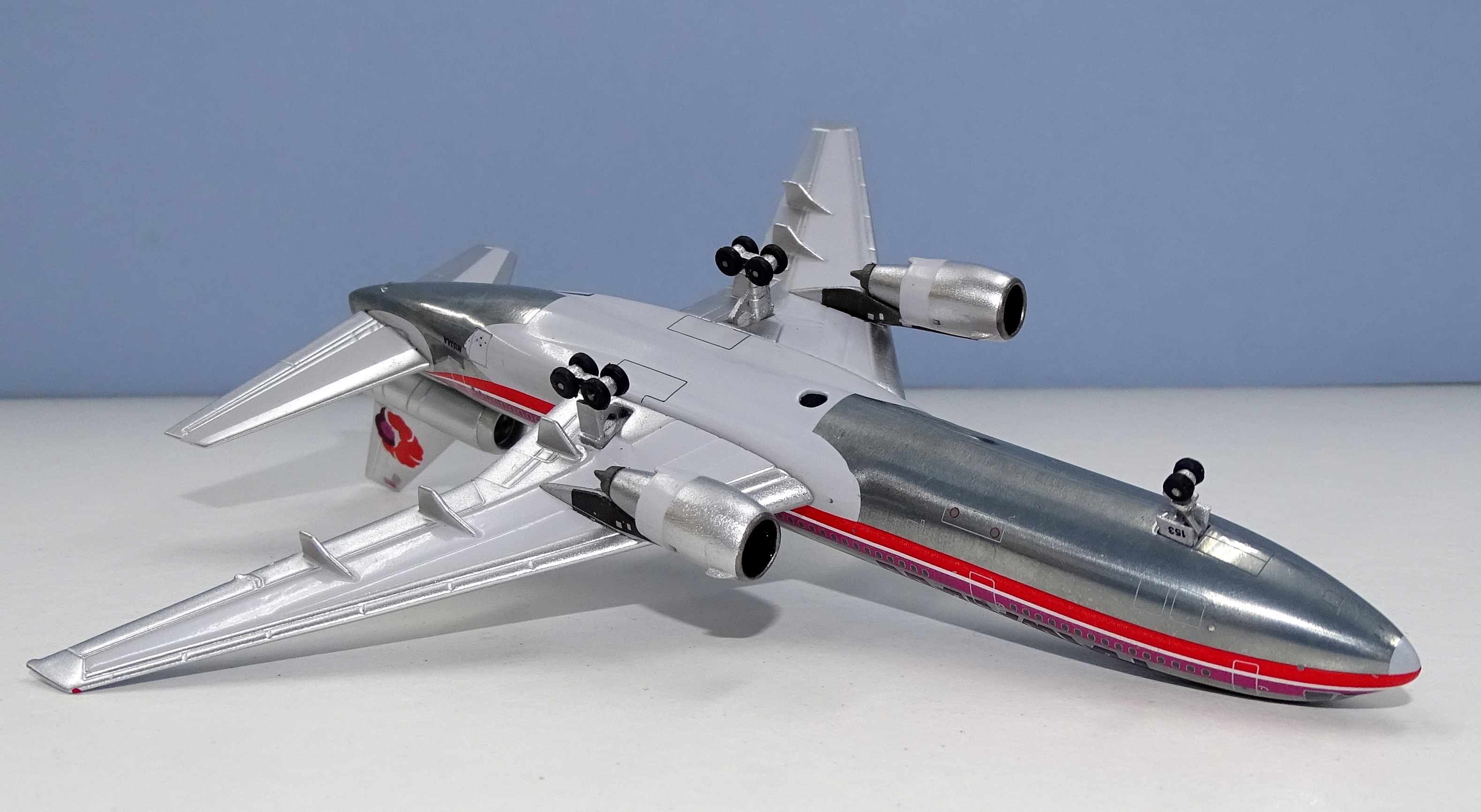 If the Aeroclassics DC-10 does have a failing it is the tubelike shape of the tail mounted engine, which isn’t as curvy as it ought to be. Aeroclassics has three different engine exhaust options to cover the six possible exhaust variants. This DC-10-10 had the later CF6-6 exhaust with a longer exhaust cover and so seemingly shorter inner cone. This is one of the variants that Aeroclassics has not chosen to mould but they do have a CF6-50 variant, which is broadly similar and passes ok for the earlier engine.

It would be nice if Aeroclassics upgraded the mould to have the three aerials of the real thing but this is wishful thinking. As it is the mould stands as one of my favourites in 1:400 scale. I particularly love that the middle number 2 engine has a full rendition of the fanblades in it even though they are well down the intake. JC Wings/Gemini could learn from that with their MD-11 mould.

In a quick comparison with the older Gemini Jets DC-10 the Aeroclassics casting is seamless (the Gemini has seams at the wing and rear fuselage), has superior engines, landing gear, wing thickness and overall fuselage shape. Plus Gemini also do not have a DC-10-10 with the correct length wings either.

The Hawaiian DC-10s unsurprisingly showed off their ancestry as ex-American Airlines aircraft and introduced a bare-metal jet scheme to Hawaiian for the first time. The traditional AA style cheatline was retained except where it tapered and swept upwards towards the tail at its rear. The titles were also enlarged.

The Pualani tail logo had already undergone a subtle change back in 1990. The flower in the hair of the island girl figure was updated with the dots replaced with a star. The petals of the larger hibiscus were also simplified with the leaf veining removed. Only a few DC-10s wore this logo as in 1995 the scheme was updated once again and the small hibiscus in the girl’s hair was replaced with a pinwheel style flower. In detail the shape of the girl herself was also altered.

Unfortunately, the subtleties of the tail logo changes have been lost on Aeroclassics. This DC-10 did wear the 1990-1995 star flower version of the scheme but the model displays the 1973-1990 dot version, which was never worn by a DC-10. Fortunately, you have to really be looking to notice the mistake and Aeroclassics at least don’t include the veining on the larger Hibiscus flower.

Another area of criticism is the main titles, which are way too dark regardless of whether this is supposed to be the 1990 or 1995 version of the scheme (the colours do seem different between the two). I have seen some poorly lit photos on flickr that seem to show the same darkness as the model has but they are very much the minority when you look across many images.

One other omission may be planned or may not be. That is the aircraft name ‘Maui – The Valley Isle’ which upon delivery was printed in a crescent shape under the cheatline forward of the L1 and R1 doors (you can see it in this photo). It is still present in photos from 1996 but looks like it was probably deleted by late 1997 when the aircraft was repainted into the 1995 colours.

The rest of the scheme is fine. An interesting detail that is correct is that the flag on the tail top on the port side is the Hawaiian State flag while that on the starboard side is the US flag.

In summary the tail logo and title colour are incorrect regardless of whether this is meant to be before or after 1997 and the name is missing if it is supposed to show the aircraft before 1997. Not very impressive research by the Aeroclassics factory at all.

Aeroclassics can certainly do bare metal on their DC-10s and the classic look of this aircraft is magnificently recreated with the aid of the silver belly and engines. The printing quality is very fine across the board. What is also nice is that the areas of carbon fibre at the nosecone, rear engine nacelles and around the wing and stabilizer joins are correctly grey not silver. Less good is that the tail is painted silver rather than left baremetal like the fuselage.

The model is generally well built but the engines under the wing are not fitted in the same way. The port side engine sticks up a little and the starboard side engine sticks down. The correct position is, I think, somewhere in between.

The Aeroclassics DC-10 is so superior to the older Gemini Jets mould, and the printing of the cockpit and engines that much better also, that I bit the bullet and replaced my old chrome Gemini model. I also like the rough and ready baremetal look rather than the chrome (there was a real metal version of the Gemini I just didn’t own it). Nonetheless Gemini got the livery mainly correct – they had the right tail and the right title colour, back in 2001. It is frustrating that Aeroclassics keep on making basic livery errors. This DC-10 is far from perfect because of that.