I last reviewed a BigBird model in March, but don’t let that fool you into believing that they have picked up the pace at all. In fact, since then only two models have been released, an Alitalia Bvlgari 747-200 and this KLM example. The first of those dates from a 2017 announcement whilst this Dutch model is the only BigBird announced in 2018. It seems that BigBird have for whatever reason given up the ghost. As I understand it although their models are made in the JC Wings factory they, not JC, actually own all the old 747 BigBird moulds, which is why JC Wings has to persist in using the old Gemini castings. With NG Models having announced their own 747SP, it seems likely that us collectors will finally have access to modern classic 747s in the nearish future, and we can then consign BigBird Mk3 to the history books. Before we do that however let me take a closer look at PH-BUD.

Early Boeing 747-100s were not renowned for their performance and engine reliability. The jumbo was pushing engine technology to the limit and the first Pan Am machines suffered from engine overheating, failure to start and casing deformation problems. The original production Pratt & Whitney JT9D-3A was quickly given water-injection to boost take-off thrust and enable a higher MTOW, but this was really a temporary solution. Boeing had always envisaged a B model 747 and the water injection JT9D-3AW could get the heavier Jumbo into the air until a better engine (the JT9D-7) arrived.

The 747-200B, as it became known, was broadly similar to a series 100 but had structurally strengthened wing stringers, spars, landing gear beams, flaps, and rib and wing panel splicing. It also had further strengthening in the fuselage, stronger brakes and new tyres. The maximum take-off weight increased to 775,000 pounds and the fuel load rose to 51,430 gallons. The range improvement benefits of the series 200 were obvious and the first series 200B was only the 88th on the production line, rolled out on September 30, 1970.

The initial production series 200 was actually built for Northwest Orient, however the first series 200 to be delivered went to KLM, as PH-BUA, who flew the airline’s first 747 to Amsterdam on January 16, 1971. KLM’s initial 7 ship order were all delivered with the Pratt & Whitney engines (eventually upgraded to water injected JT9D-7Ws) and registered PH-BUA-BUG. KLM has historically named its aircraft after a variety of cities, geographical features or animals and the 747s were allotted the names of famous rivers.

PH-BUD arrived in the fleet on August 31, 1971 and was named ‘Nile’ after the Egyptian river. It would be nearly four years until further 747s were added to the KLM fleet and when they were, they would be significantly different to the first 7 frames. This was because they were the first 747s that weren’t equipped with Pratt & Whitney engines. Multiple engine choices were unusual for aircraft at the time but by 1975 KLM was able to chose between the Pratt engines and the General Electric CF6-50, opting for the latter.

The GE engines had benefitted from their development for the Lockheed C-5 Galaxy and the base model was more powerful than even the JT9D-7. It was also being used on the McDonnell Douglas DC-10-30, which was already in the KLM fleet. Ten extra aircraft would join the fleet over the next 5 years, several of which were Combis that would also be retrofitted with the extended upper deck later to be used on the series 300 (for which KLM was also a customer).

KLM’s early 747-206Bs saw service into the late 1980s. The first four were sold to America West in late 1989 for its ill-fated adventure into the Pacific. PH-BUD became N534AW in July 1990.  She saw a short lease to Garuda but was sold to TWA in March 1994 as N306TW. In January 2002 the airframe was sold to Evergreen Aircraft Sales and Leasing for parting out and was broken up at Mojave in January 2003.

As with the 747-400 from the first BigBird this mould dates all the way from 2003 and like that mould the models made are hard to find and tend to change hands for exorbitant amounts of money. This is actually the second time that this mould has been used to produce an aircraft of this livery, with the original 2005 release being typically hard to find and expensive. 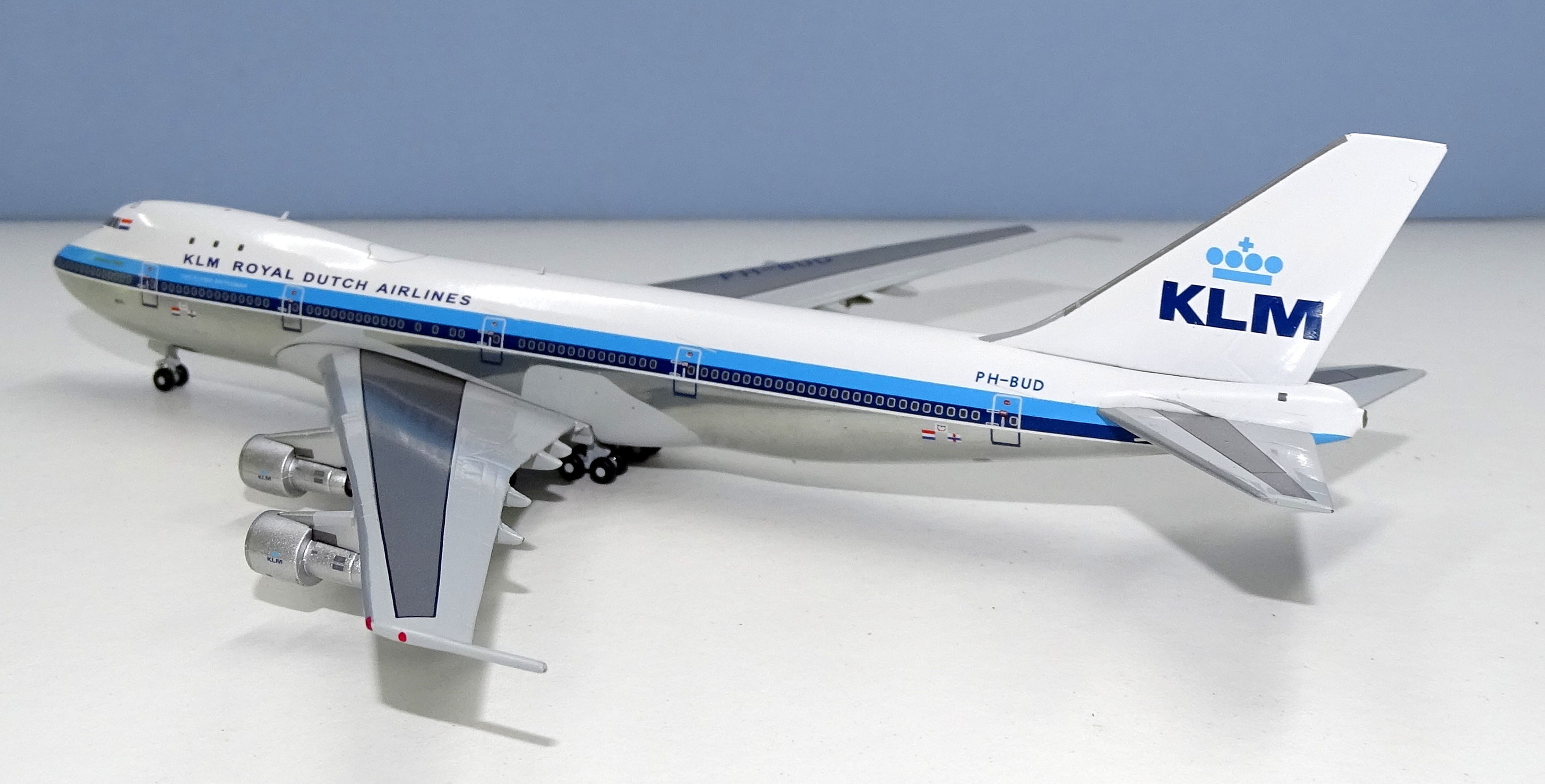 The classic BigBird 747-200, as represented by this model, has been lionized for years, and although it is perhaps showing its age it is still a very impressive casting. If BigBird Mk3 could have been more productive I don’t doubt they could have sold many 747s using this mould, but it looks likely they have missed the boat.

It has a great fuselage shape, plus comes with very finely done landing gear and long wingtip HF aerials. The urge to replace the non-rolling gears has, I’m glad to say, been avoided, which means there is no fear of the sort of damage to the integrity of the mould that resulted when JC modified the landing gear of the Witty Tristar. The vertical stabiliser is well shaped but probably slightly too tall making the top edge too slim.

Arguably you could say the engine pylon join is a little old fashioned, but it is much better than that of the old Gemini 747, and the vertical stabiliser fit is better than the competing Dragon Wings 747. I’m obviously not going to even suggest a comparison with the risible Phoenix 747-200. A particularly nice area is the APU exhaust in the tailcone.

The only real compromise is that it is a cradle mould and so has a seam. At this point in time literally nobody was making seamless moulds, aside from Dragon, and the seam is tastefully done running around the natural fuselage/wing join bulge.

BigBird have taken the opportunity to sensitively update the mould with aerials but have not added in the unusual dome at the rear of the hump. The aerials are well sized and shaped and only one small underbelly antenna is missing.

This has been for many years the benchmark in 747-100/200s only surpassed by the seamless Aviation400/Witty Wings mould. Nonetheless there is some room for improvement so I will dock a couple of points for the seam, tail tip and engine/wing join.

KLM’s original Jumbos were delivered in the fairly conservative livery used by the stretch DC-8s. This had ditched the chocolate box style striped tail scheme and introduced a mainly white tail in its place. The new scheme was not a great success and in 1972, even before the entire fleet had been repainted into it, the classic blue top livery was adopted in its place. Nonetheless the delivery scheme looks smart on the 747. Excellent photos of PH-BUD in this scheme can be found here and here.

Since this model was made way back in 2005 on the same mould, albeit as PH-BUA, it is hard not to compare this modern example with its older sibling. Unfortunately, the comparison isn’t very flattering. Broadly the colours are fine. The light blue may be slightly too light but it isn’t a major concern.

The width and detailing of the cheatlines is good and the main titles and tail titles use the correct font. Undoubtedly what damages the model is the placement of the fuselage elements. At the nose the cheatline appears correctly positioned but by the time it’s near the wing it is clearly way too high. At the horizontal stabilizer, where you can see on the model that in its neutral position the cheatline intersects at its upper surface, it ought to be completely beneath the stabilizer altogether.

The result is disappointing, doubly so, as the 2005 release gets the position of the cheatline correct along its entire length. The 2005 release also has better placement of the Dutch flag behind the cockpit windows. Another small criticism is to be made of the ‘THE FLYING DUTCHMAN’ titles within the light blue cheatline forward. They are not white enough; in fact, they are almost blue themselves.

This is a frustrating representation of a simple scheme. All the details are there (Dutch NIJL spelling on the port side for example) but they have made such a mess of the cheatline placement that it damages the overall result. 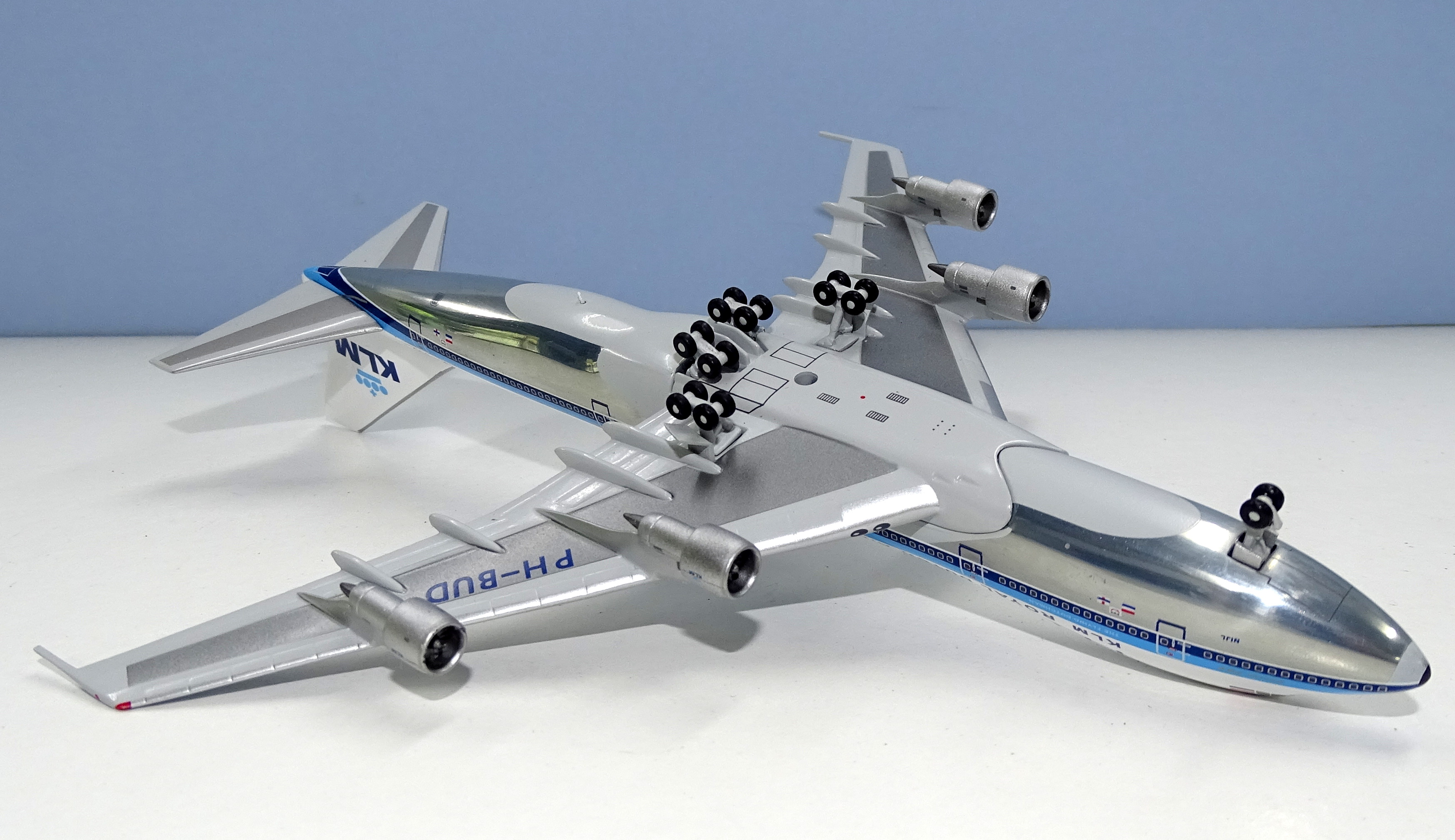 Ignoring the placement of the cheatline, scored in the earlier section, the printing is crisp, clean and detailed. The silver belly and grey panels around the wing root are very nicely done. Detailing on the engines is also impeccable, although the fanblades are not dark enough by far.

Construction quality would be perfect if it weren’t for the fact the starboard side horizontal stabilizer came detached. It hasn’t damaged the model and can be easily slotted back in but there hasn’t been enough glue used on it, simple as that. The model’s nosegear also does not naturally quite reach the ground, although the distance between it and the surface is very small.

It is hard to turn down classic Jumbos, especially when they are on such lovely moulds, but I have to admit that the cheatline printing on this model does give me pause for thought and had I known about it before purchase I may well have not acquired it. BigBird Mk3 models have been good but this model illustrates that they are really part time model makers. Perhaps it is simply best for them to move over and let someone like NG do it better. Since BigBird Mk3 haven’t actually announced a new release in over a year anyway this may well be academic. If this is the last BigBird Mk3 model then it is a middling release to go out on.

Aeroclassics is the go to place for models in 1/400 scale that pre-date the turn of the century, and they reliably produce a wide range of interesting and noteworthy airlines on a wide variety of […]

It is easy to be harsh on Gemini Jets nowadays and one of the main reasons in my mind is how incredibly conservative their releases can be. They have a massive mould catalogue but rarely […]