Once again, I have the opportunity to directly compare two versions of the same aircraft. It was only in the last issue of the Airliner Model magazine that I reviewed the Panda models version of the first Hainan Airlines 737 MAX-8 and indeed, as is usually the case with new Chinese airliners nowadays, this same aircraft has been released by all of Panda, Aeroclassics and JC Wings. Having bought the Panda version, I wasn’t expecting to receive the JC Wings example but having done so it gives me a chance to directly compare the two best MAXes on the market in 1:400 scale.

Hainan Airlines is the cornerstone of the HNA Group, which has become a behemoth of a company, buying up everything in its path in a wide range of fields such as Hilton hotels and Deutsche Bank. Unfortunately, not only is the ownership structure of the group opaque but quite how it has acquired such vast wealth is poorly misunderstood. A lot of it appears to be off of the back of gargantuan loans from state-owned Chinese banks.

The chickens have however come home to roost at the HNA group, which has amassed debts of over $100 billion. Of recent it has been struggling to pay its way and desperately trying to sell assets. This has impacted the airline side of the business, which not only includes Hainan Airlines but also a variety of other carriers. As recently as March it became apparent that HNA Group had been not paying on time for aviation fuel from the China National Aviation Fuel Group.

If this all seems pretty serious, it should, but so far there appears to have been limited operational impact on Hainan Airlines itself. Indeed the fleet, which nowadays stands at over 200 aircraft, is super modern and the airline has been receiving new 787-9s and A330s on schedule. In addition, Hainan Airlines has taken into service its first 5 737 MAX-8s in a two-class configuration for 176 passengers. The airline has commitments for at least 45 other MAXes, announced as long ago as July 2014, and it’ll be interesting to see how many it gets given its parent’s financial troubles.

This aircraft, B-1390, was the first aircraft to arrive in Haikou for Hainan, even though subsequent deliveries have had numeric registrations earlier than it in the sequence. It first flew on October 30, 2017 and was delivered on November 17 making Hainan the second Chinese airline, after Air China, to fly the MAX.

Even with HNA group’s financial troubles Hainan Airlines itself remains profitable. In August it announced its results for the first 6 months of 2018, which, although showing a 55% decline year on year from the same period in 2017, still amounted to $100 million and this was off the back of a revenue jump of 16%. At the same time assets sales have continued, such as its large stake in the Brazilian carrier Azul, helping to bolster its financial position.

It is a credit to this mould and the Panda mould that both look distinctive and yet at the same time close to the real thing. Indeed, it is difficult to choose between the two. As with the Panda mould the JC Wings has an effectively faultless fuselage. The nose shape is very good and about the only possible criticism, and it is very minor, is that the tailcone is perhaps a little too blunt.

The wings, winglets and engines are also superb with the engine pylons representing one of the clear areas of difference between the two moulds. On the Panda version they are one piece with the wing whilst on the JC version they are separate pieces. It doesn’t make any real difference to the quality of the finish although the JC version is perhaps more accurate and detailed.

The undercarriage is good although the nosegear doors are a little short and the nosegear tyre slightly too large. Another point of minor difference is the vertical stabilizer. The JC Wings tail is very closely fitted and there is no space under the rudder as on the real thing and the Panda mould.

Looking at the aerials and domes and once again there are minor points of difference but it is ‘six of one and half a dozen of the other’ as the saying goes. On the JC Wings version all 5 aerials are represented (including the underbody off centre one) however I do think that all the aerials are slightly over-sized. This model also features the small dome just ahead of the tail although it is too large on the model here. The Panda version has better sized aerials (but misses the fifth one) and ignores the small dome.

The differences between the JC Wings and Panda 737 MAX-8 boil down to small and relatively insignificant details none of which really amount to much. Although personally I prefer the Panda version this JC Wings mould is nearly as good.

I rather like the current Hainan Airlines scheme, which is modern without resorting to a mainly white fuselage. The movement of colour from the tail forward holds the entire scheme together well and connects it with the titles, whilst nice details like the yellow main doors forward add a nice pop of colour.

In 1:400 there are two trends for this fairly common scheme. Phoenix tend to produce a lighter version of the colours whilst everyone else goes darker. JC Wings certainly subscribe to a darker version which is slightly darker than the one Panda used on their MAX. It is a shade too dark but isn’t distracting especially if you already own other Hainan JC Wings releases. 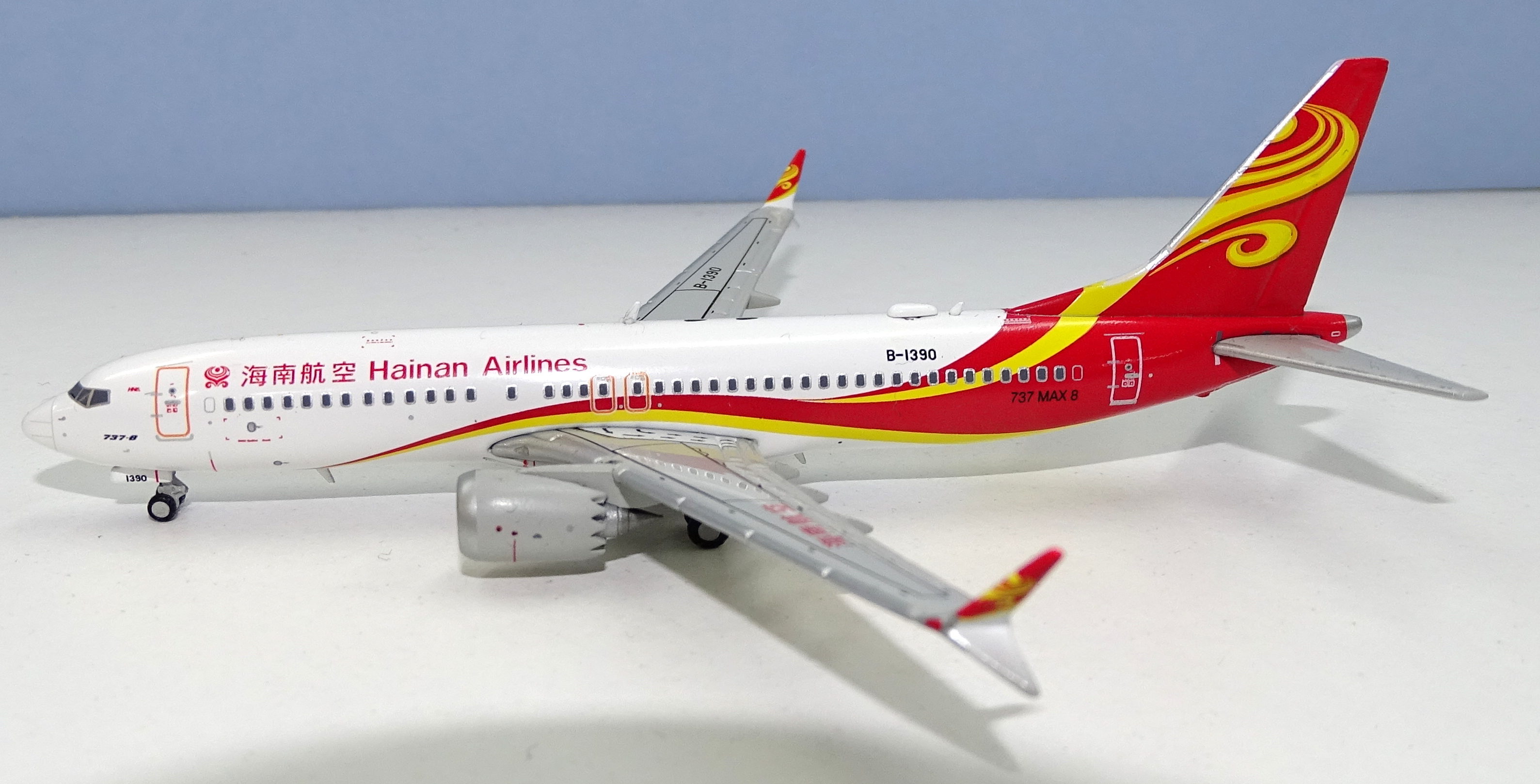 The placement of the livery on the model is very good. The small details are a good indicator of the overall quality. The main doors forward are correctly yellow, the 737-8 titles forward and 737 MAX 8 titles at the rear present and correct, and the shadow on the main tail logo good. Also exemplary are the winglets with the Hainan logo on both sides of the upper half.

About the only problem I have with the representation of the model is the colour of the engines (and also the wings). The grey used on the real thing is a light shade but the model has a medium grey, which is definitely too dark. 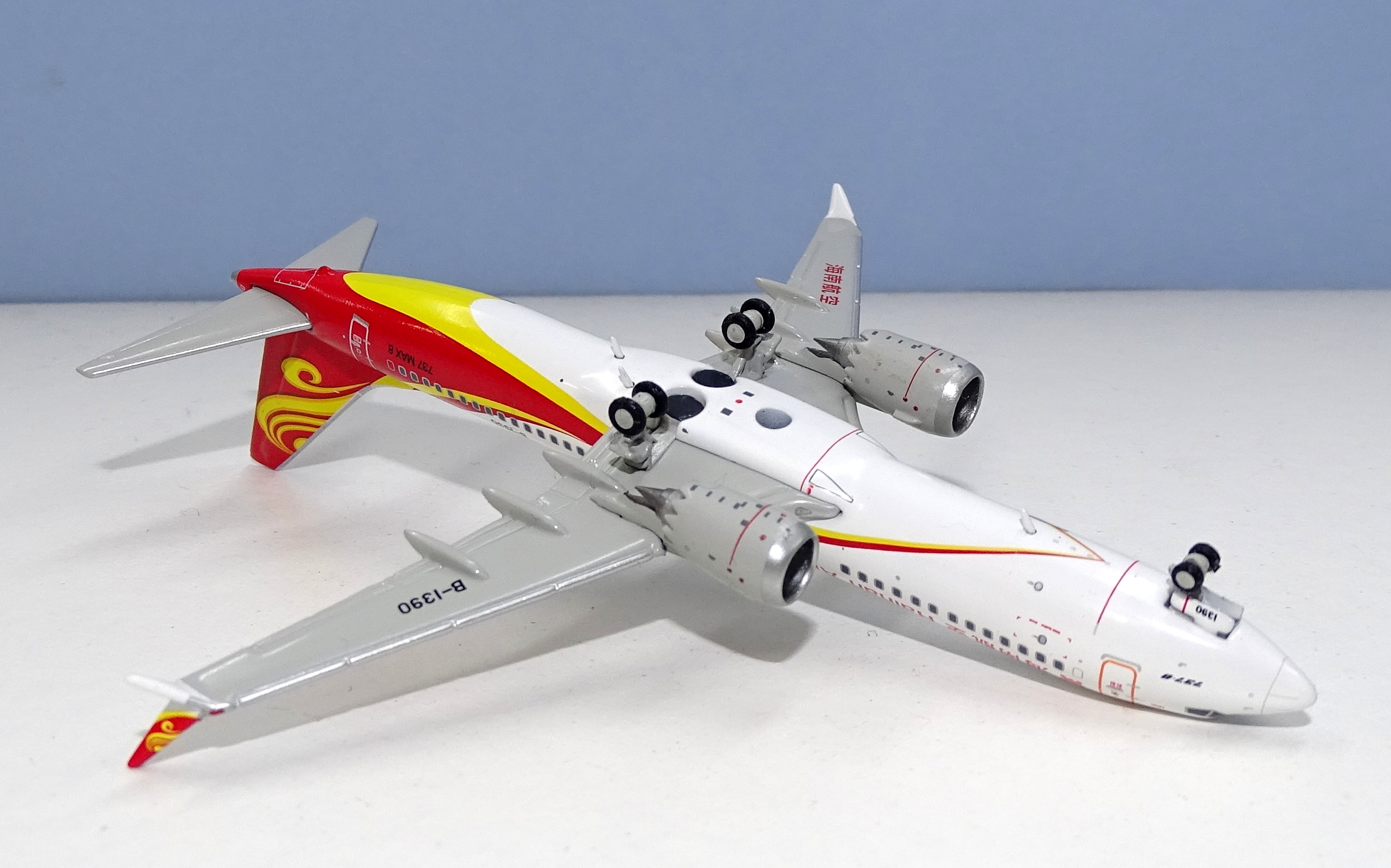 This JC Wings model matches the Panda’s for printing and surpasses it in that it has the nosecone printed. Tiny features like the HNA logo after the cockpit are printed in fine detail. Cut out panels and engine markings are also great and almost exactly mirror those of the Panda version. On the underside the mould has a stand hole (unlike the Panda) and the wheel bays are coloured black. The inside of the engines is arguably too silvery but there is good definition between the blades themselves and the spaces in between them.

There are no issues with the build quality of this product. Everything is fitted well and all the wheels roll.

It is a rare thing to have two examples of the same aircraft from two manufacturers and find that they are equally as strong as one another. The JC Wings mould easily out competes those of Phoenix and Aeroclassics and is as good as that of Pandas. If you can find major issues with either of these releases then I’d respectfully suggest you should stop collecting right now! After the debacle of various 737NG moulds, none of which quite hit the mark, it is refreshing to have plenty of options for the type’s successor.

Manufacturer house colours have become a fertile ground for new models in recent years, mainly for Aviation400, JC Wings, Panda Models and Phoenix. Of these only JC and Phoenix have the variety of moulds, or […]