There are just not enough prop aircraft made in 1:400 scale and if it wasn’t for Aeroclassics there’d be almost none. This year though even Aeroclassics has not produced many props so it was a very welcome surprise to see the return of the C-46 Commando in September. The Commando is one of those aircraft with a lot of personality, but with relatively limited usage primarily before the 1970s it is a wonder that it has a mould in 1:400 at all. The scale is a lot better off for it though.

Seaboard & Western Airlines began as just one of hundreds of non-scheduled airlines in the USA, during the immediate postwar era, but unlike almost all of them it focused on freight and successfully managed in 1955 to convince the all-powerful Civil Aeronautics Bureau (CAB) to assign it as the only approved US freight airline across the Atlantic Ocean to Europe.

By this time the core of the fleet was Lockheed Super Constellations, backed up by the remaining DC-4s, but they were too large to provide feed into the airline’s European cargo hubs and for that task Seaboard turned to the Curtiss C-46. The C-46 had overcome initial service issues (mid-air explosions!) to become an excellent cargo hauler offering twice the payload capacity of the competing DC-3.

Three Commandos had been operated by Seaboard briefly from 1949 until 1951 but it was a 1942 build frame that was leased in 1956 (and later purchased) from the supplemental airline AAXICO that would fulfil the European feeder task for over a decade. N10427 had originally been built for the USAAF as 42-101077 but transferred to the US Navy in September 1944 as 39573. She wasn’t acquired by AAXICO until 1956.

During her 14 years with Seaboard N10427 would see Seaboard & Western struggle financially and then be reborn in 1961 as Seaboard World, whilst the aircraft would be feeding the Connies at first, then Canadair CL-44s and finally Douglas DC-8 jets.

For more about Seaboard in the 1960s see Western to the World: Seaboard’s Golden 60s

She was retired at Frankfurt in 1970 but sold a few years later and as with many C-46s found her way to South America. Sadly her new owners (Joanne Fashions) didn’t take very good care of her and still wearing N10427 she was was written off in a crash at Barrancabermeja, Colombia on February 21, 1973 after an engine failure.

The rugged simplicity of the C-46 saw them survive in the primitive high-altitude conditions of Bolivia flying meat to market well into the 2000s. Hopefully Aeroclassics will see fit to continue to produce examples of this solid transport in the near future. 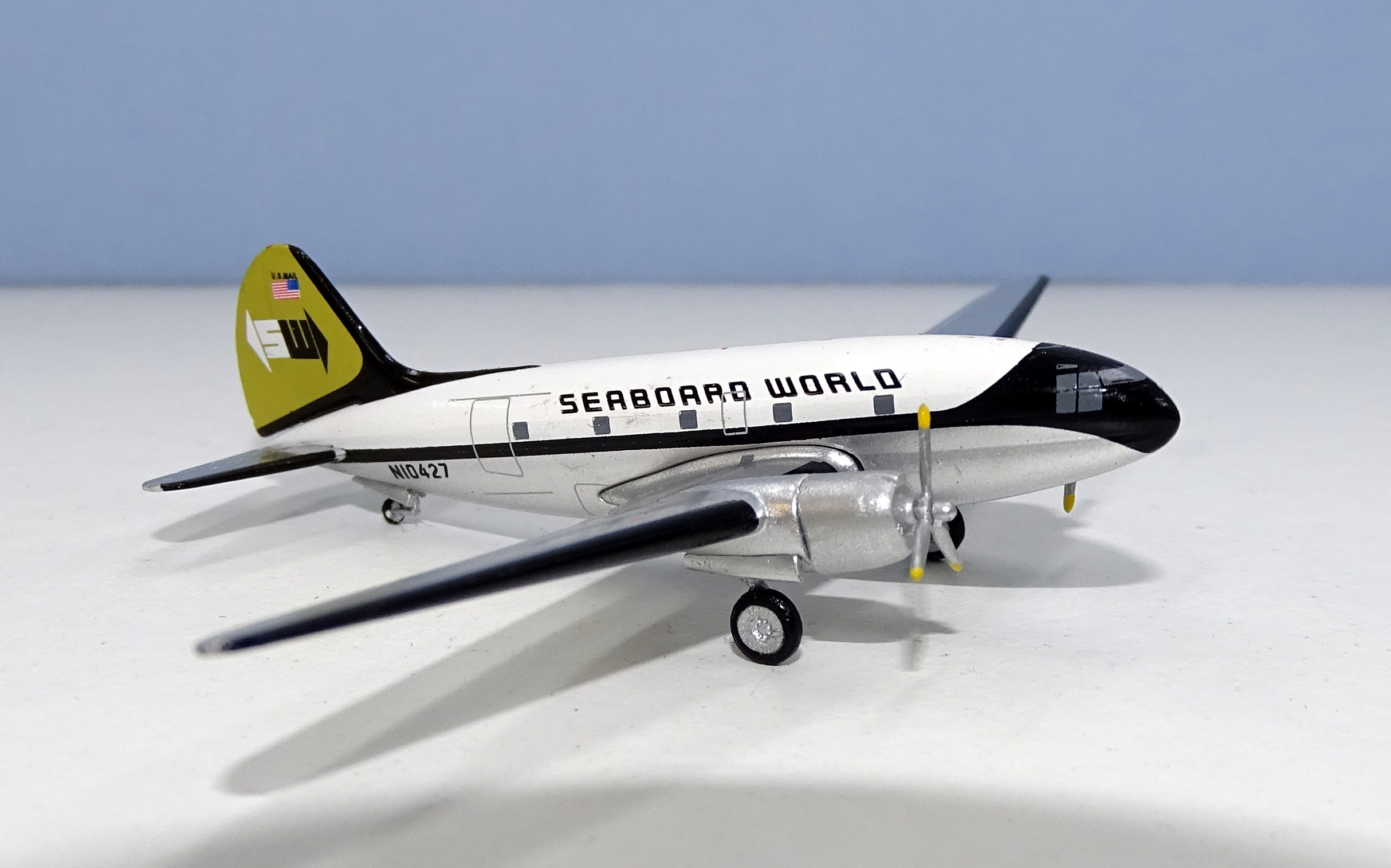 The C-46 is one of the smallest moulds made in 1:400 scale but even so the aircraft is surprisingly large and chunky – much bigger than a DC-3 and larger and chunkier than most regional props (HS748, Saab 340, ATR-42). The fuselage shape is especially unusual being ovoid both in cross-section and from the side. There is a major crease along the side of the fuselage betraying the fact that the upper fuselage and lower fuselage have different cross-sections. The shape of the entire fuselage is excellent on the mould and the crease clear and obvious as in the real thing. 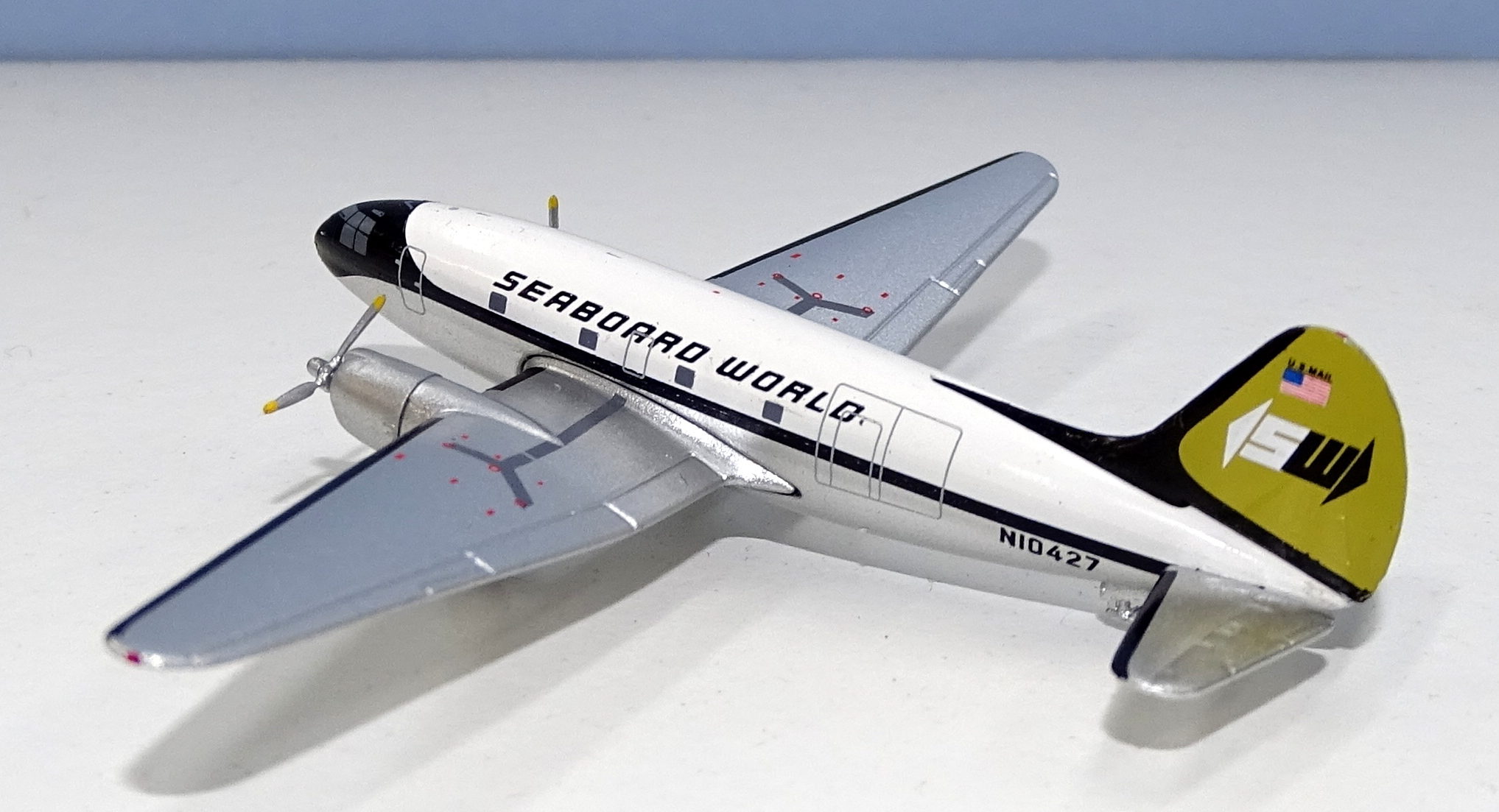 The wings on the C-46 are impressively large and the mould has them excellently mated to the fuselage and moulded together with the engines and main gear doors. As is often the case with Aeroclassics prop moulds the actual engine, with their prop blades, are attached to the engine mounts as a separate piece but the join line matches the natural line of the real engines so the connection does not look unnatural. There is room for some extra detailing of the engines on the underside ahead of the wheelbays, which is missing. The C-46 has massive maingear doors and although well shaped they are perhaps slightly too small. 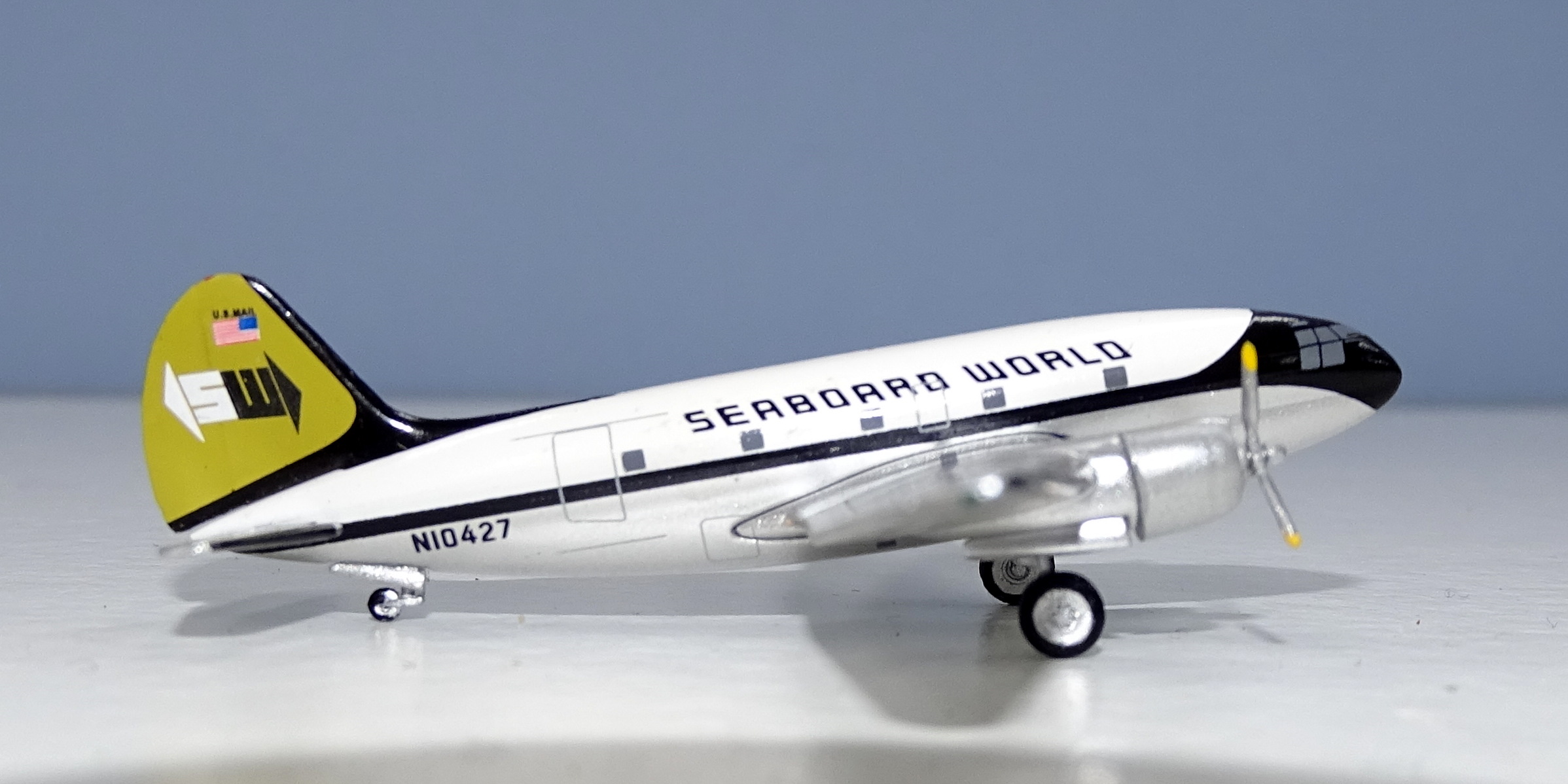 Aeroclassics doesn’t bother trying any rolling gear on such small moulds and given how the single tyres are fitted to the gear leg I can understand why. Rolling gear is not needed and both the main and rear gear is nicely detailed. Control surfaces on the wings and horizontal stabs are well marked with only the rudder line a little too lightly defined. 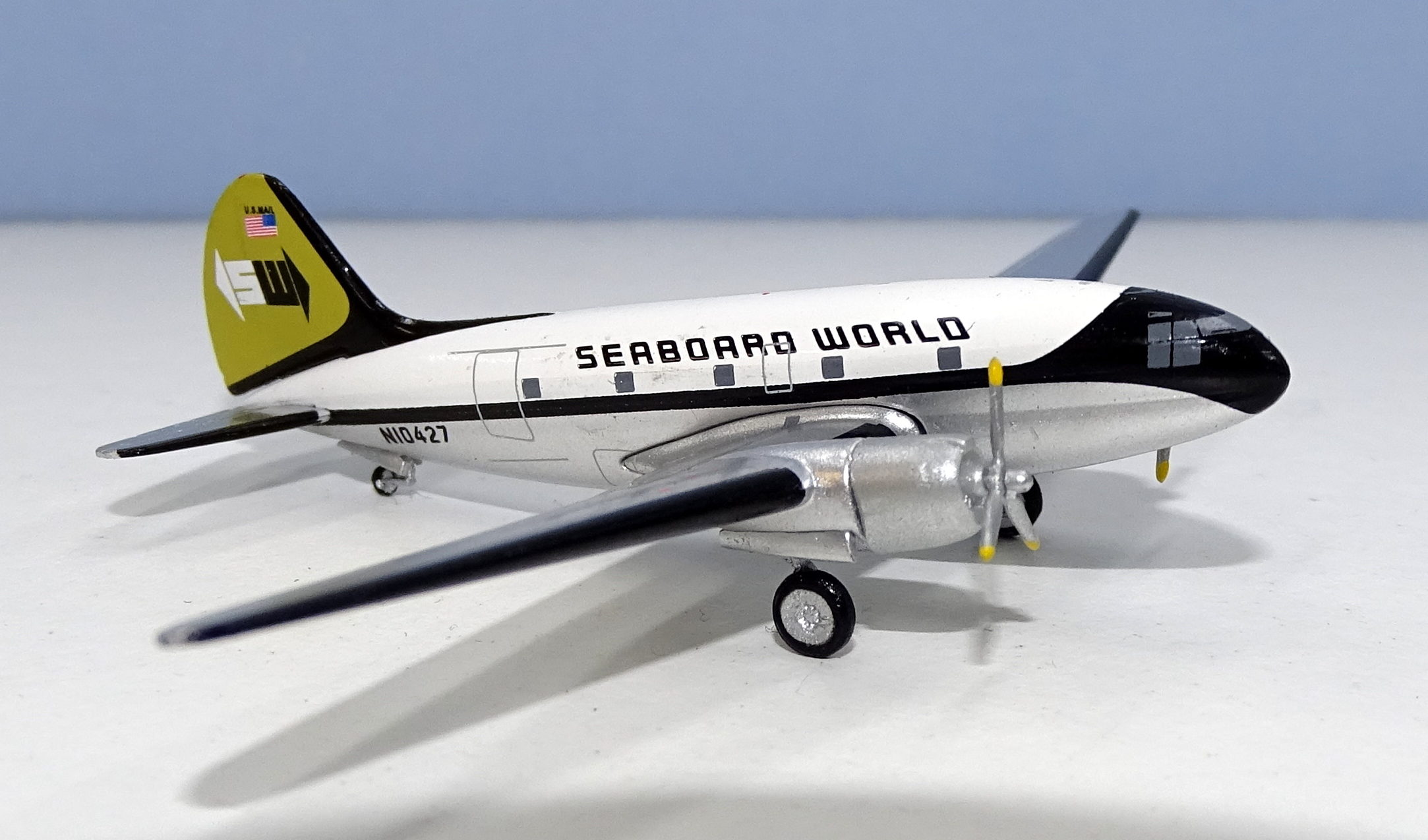 The only real criticism of this mould is that it of course has no aerials. You would think that doesn’t matter on such a small mould but the C-46 actually had some seriously chunky aerials under the nose and on the roof line. I can understand why they were left off but I do think at least the two under the nose would add to the model if a method could be found to fit them well. 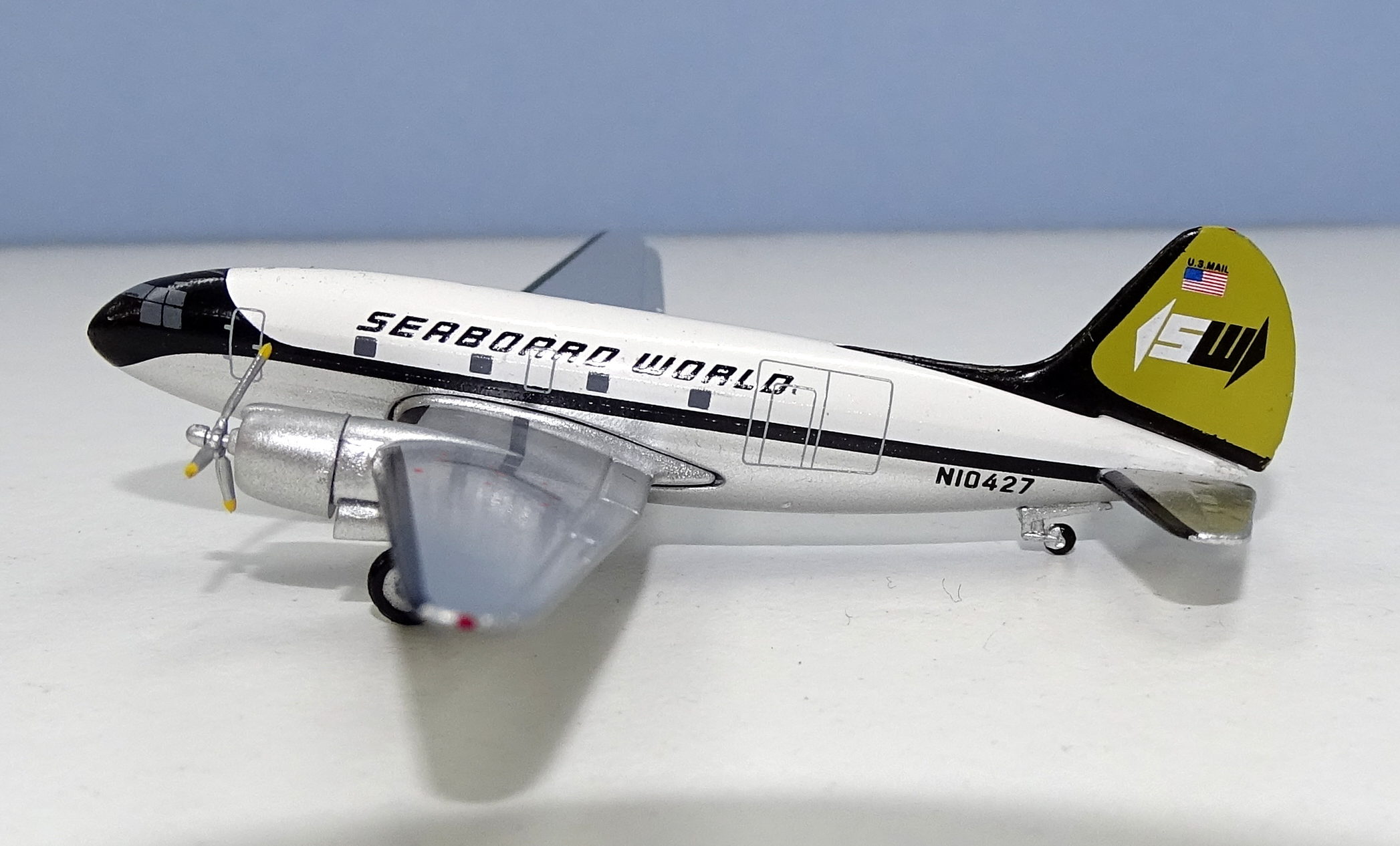 The Seaboard World scheme adopted in 1961 following the name change is a certified classic, which looked good on any plane. The gold and black colour combination is excellent and I am surprised that more airlines didn’t pick such a nice colour pairing. Aeroclassics gets the colours accurate enough and I have no complaints about the placement of livery components either. 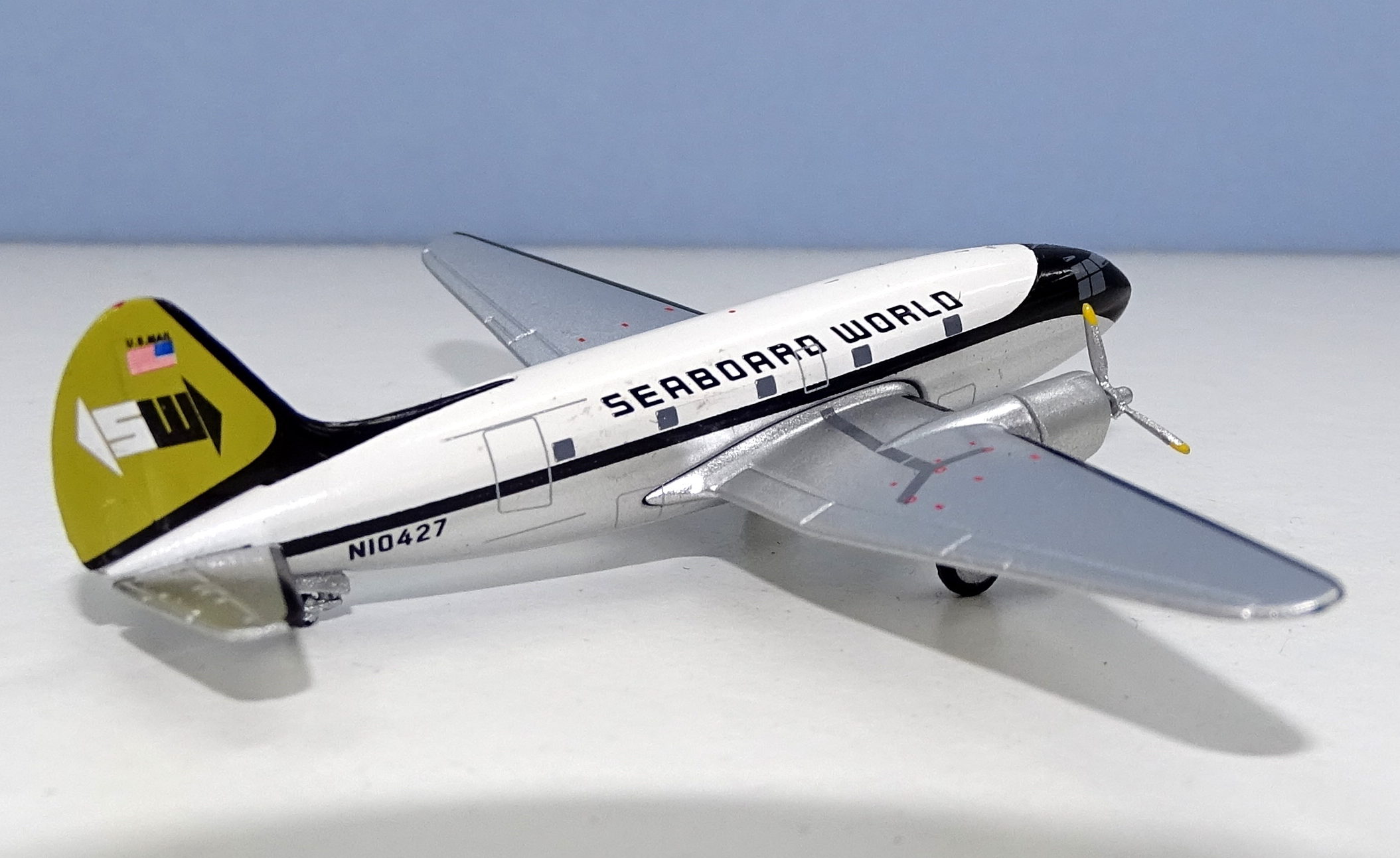 The black mask looks especially good and even the font of the SEABOARD WORD italicized titles is decent. Leading edges on the wings and stabs are correctly black and the belly and wings nicely overall silver. 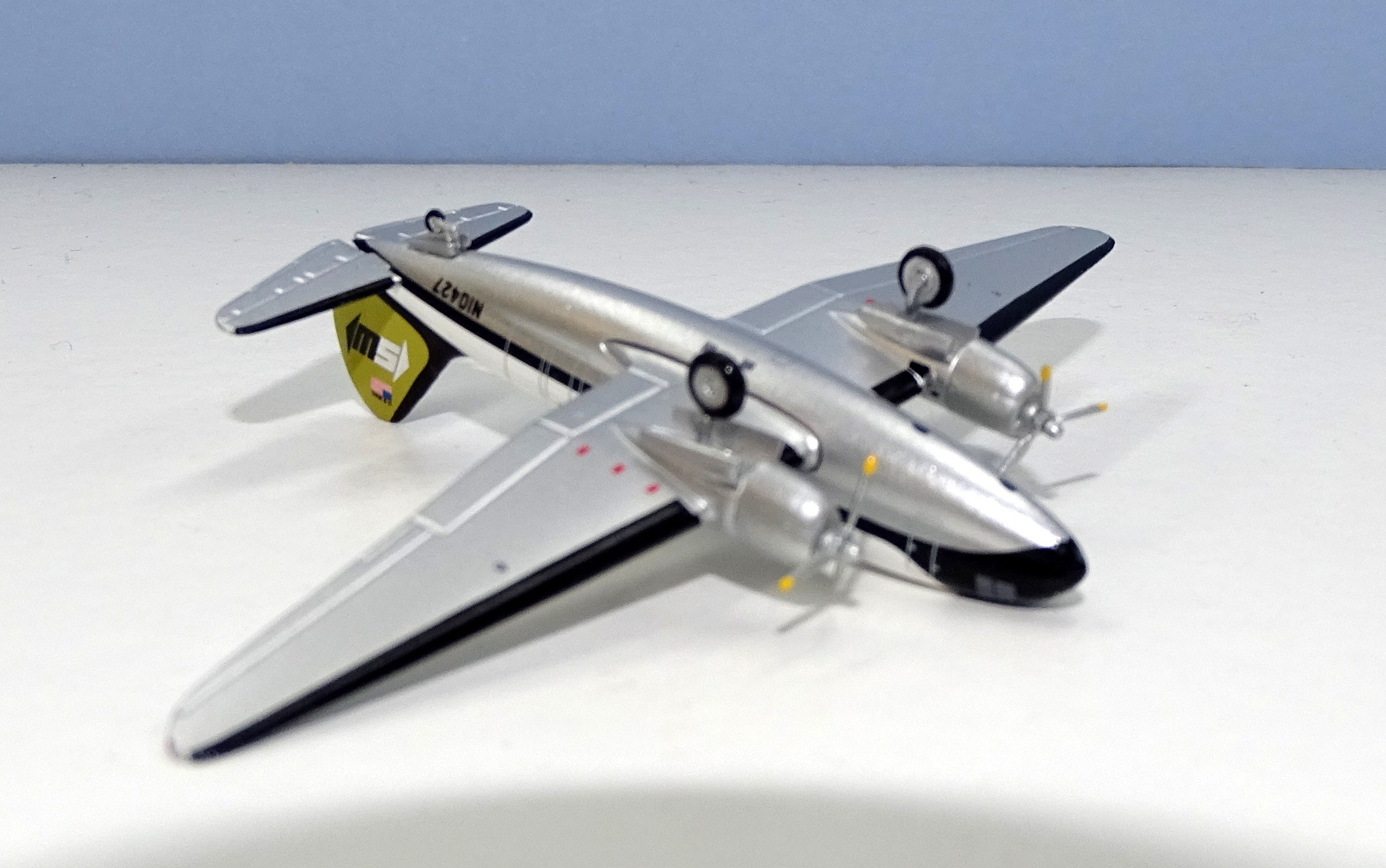 Printing is vital on small models as mistakes are really obvious; Fortunately, Aeroclassics doesn’t make any. The large glazed cockpit windows are nicely placed giving the correct look to the aircraft. One area that Aeroclassics does sometimes struggle with on the non-rolling gear moulds is painting the tyres. This was evident on the last batch of HS748s but is less of a problem on this C-46. The paint application to the maingear tyres is uniform and good, however there isn’t enough of it making the tyre hubs look a little larger than they ought to. The tiny rear tyre is painted less well and there is silver present where it ought to be all black.

It is a small fiddly mould to construct but this has been carried off well and there are no build problems. Both sets of props spin effectively.

I was surprised to see the return of the C-46 but I have been very impressed by both the selection of airlines and the quality of the models made on it. They are excellent and welcome shot in the arm to those collecting aircraft dating from the 1950s and 60s. This Seaboard World example was a no brainer for the mould and I hope to see more examples like Alaska Airlines, Capitol, Wien Air Alaska, and Flying Tigers for starters. Hopefully amongst the sea of A320s and 737s collectors can show there is still a market for classic props.