Propeller releases are an endangered species in 1:400 scale so there is an exaggerated sense of gratitude whenever one appears. Since I have a particular soft-spot for the Convair 580 (due to my flight from the cockpit on an Air Chathams example) I’m a big advocate for Gemini Jets dusting off their CV-580 mould, which has seen precious little usage in 1:400 scale. So, here’s hoping that it is worth the wait and will be the first of a wider selection of Convairs available in 2019.

The certified local service airlines of the 1950s had built their operations around the versatile and rugged Douglas DC-3, but as the jet-age arrived, and their route systems grew, they knew they needed new equipment. Some, like Allegheny, Bonanza, Pacific and West Coast, opted for the Fairchild F-27, but the expensive turboprop could only be purchased in small numbers. Instead the majority looked to the trunk airlines and began to acquire the fleets of used piston engine Convairliners and Martins they were rapidly discarding.

When North Central acquired 18 new cities and 2,000 route miles from a 1958 CAB award they looked at the F-27 to upgrade their fleet, but instead settled on the cheaper second-hand Convairs and acquired 5 CV-340s from Continental for $325,000 each. These were just the first of many, and other Convairs arrived regularly from a wide-range of airlines (from Braniff to Lan Chile) so that by 1965 the fleet included 28 CV-340/440s. These accounted for 90% of the airline’s available seat miles.

The logical next step for the cheap, but sturdy and reliable, Convairs was to re-equip them with turboprop engines and in 1966 North Central signed a deal with Pacific Aeromotive to upgrade the first of an eventual 33 Convairs to 580s with the huge Allison 501-D13D prop-jet engines. North Central was actually quite late to the game since the first CV-580 had been converted in 1961 and the first went into airline service, with Frontier, in 1964.

Indeed, North Central took the very last of the 170 conversions done by PacAero, on July 26, 1969. Service entry of the CV-580 with NC was April 1, 1967 and the type proved cheaper to operate than the CV-340/440s. The 580s were superbly successful and 24 remained in service with North Central after the merger with Southern to form Republic Airlines in 1979. Thirteen were still in service by 1986 and briefly joined the fleet of Northwest Airlines when Herman the Mallard duck disappeared for good.

N2041 was an unusual example from the North Central fleet. She had been originally delivered to National Airlines in June 1956 as a CV-440 and was sold to North Central in February 1963. She was selected for her conversion to 580 status in early 1968 and rejoined the fleet in May, by which time North Central had joined the true jet-age with DC-9s.

What made her time with NC unusual was that in July 1975 she was converted to an executive configuration and re-registered as N580N. She served in this capacity through to the merger with Northwest in late 1986. Following that she was exported to Canada and served, as c-FTAP, with Time Air, Canair cargo and from February 1998 Nolinor Aviation. Impressively she remained in service into late 2018 and is as far as I’m aware still providing reliable service to this day. 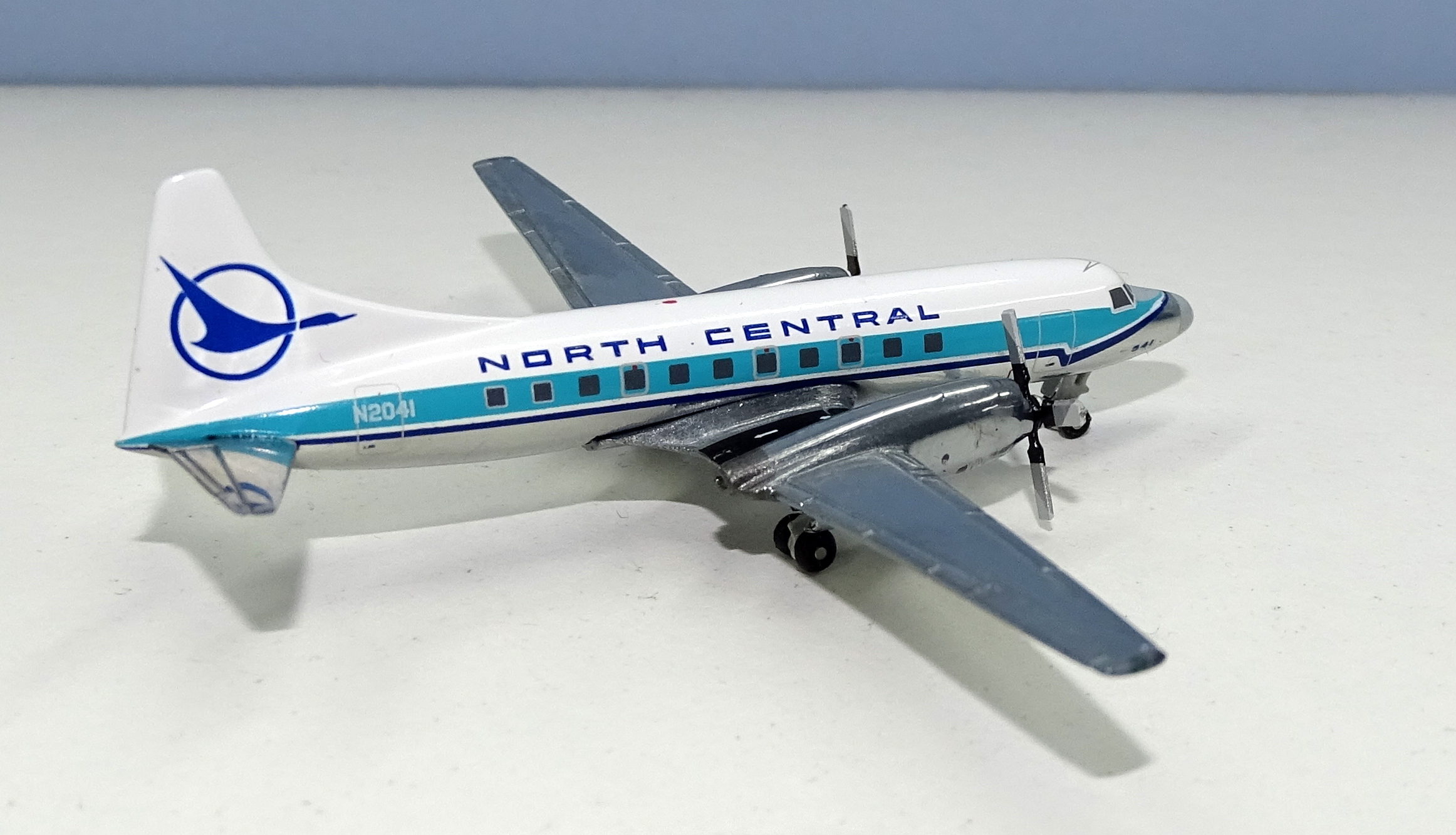 Aeroclassics has the definitive Convairliner mould in 1:400 scale, but they have not created a turboprop CV-580 version of it and can only represent the original piston engine versions from the CV-240-440. As I discussed recently there is plenty of scope for new Convair 580s, although I admit some of them will probably not reach the sales threshold that would make them worthwhile for Gemini. That’s a shame as this is a solid casting. 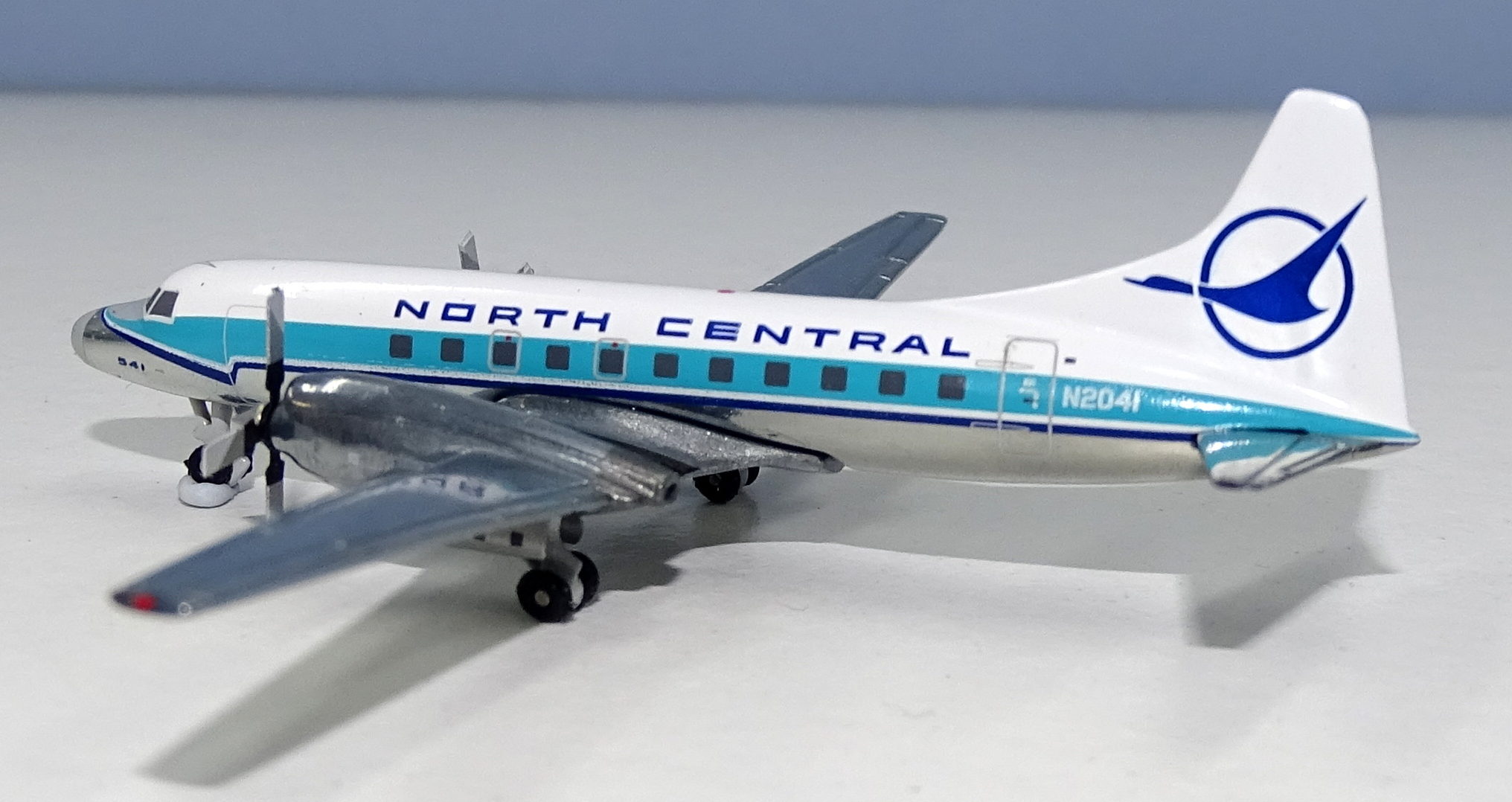 The origins of this mould come from the JC Wings piston engine version, which appeared in 2009. Mating the long nose CV-440 with a new wing and engines created a CV-580 in 2012 and the result is pretty good. Starting with the plus points the wings and engines are lovely single piece fittings. Yes, the mould is a cradle mount, but you don’t really notice, and the single-piece engines are an improvement over the Aeroclassics style ones, which are two-piece. The large flat four-bladed propellers of the Allison engines are especially nice.

The fuselage is well shaped. Gemini understandably don’t bother with aerials on such a small model. I do think the tail top could be a little rounder and the nose underside a little deeper but these are minor criticisms. 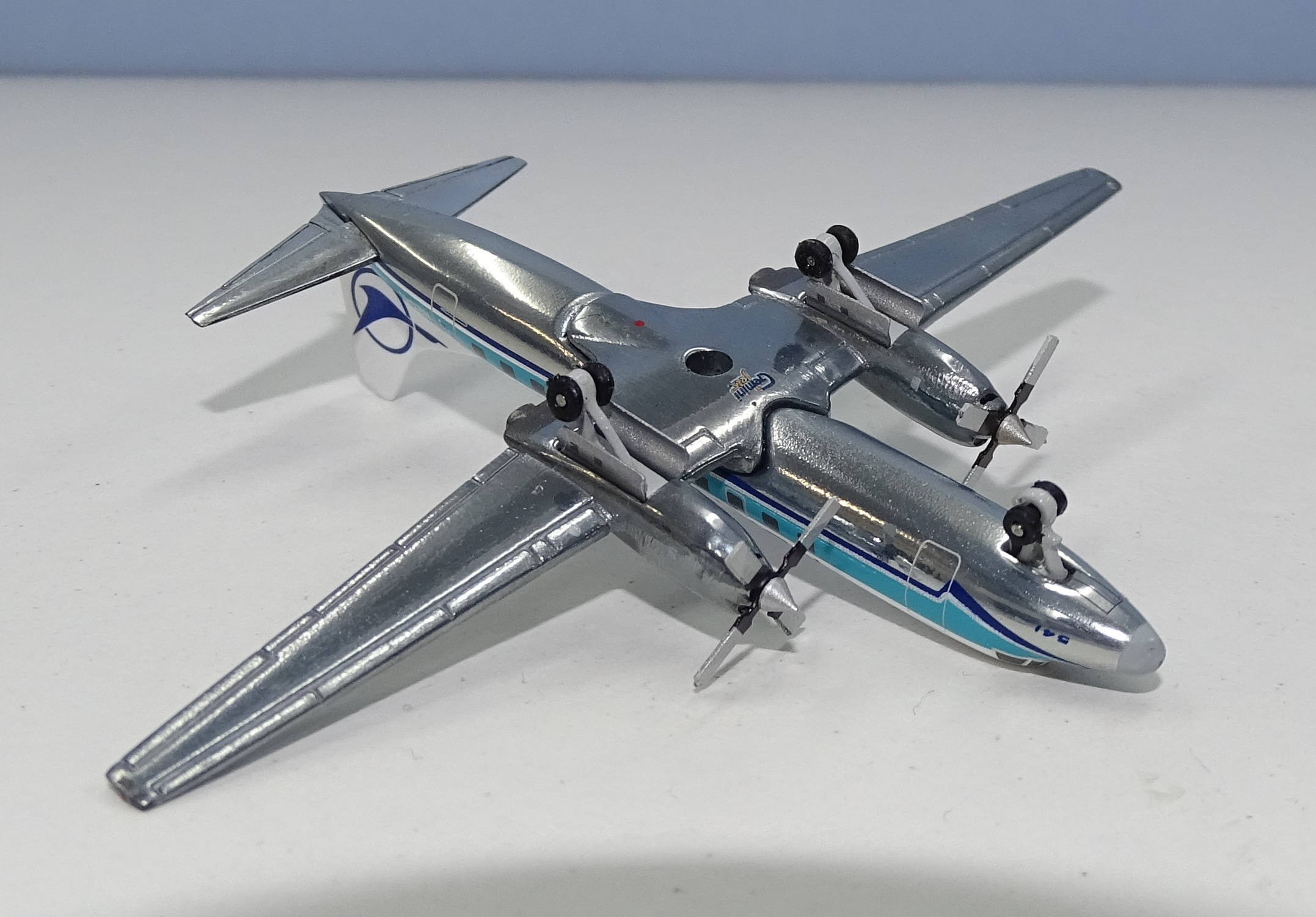 The mould’s greatest weakness is the landing gear. The maingear isn’t too bad although the wheels sit a little too far back from the geardoors. It is the nosegear which is the mould’s achilles heel. Compared to the delightfully thin and crafted Aeroclassics Convair nosegear the Gemini mould’s is too chunky and also too short. The model stands with a nosedown attitude, when the CV-580 should have a straight back.

Standing is actually a major issue for the model but I’ll discuss that in the QC section. This is a nice little mould. It may not be perfect, and could do with a better nosegear, but it is more than satisfactory for me. 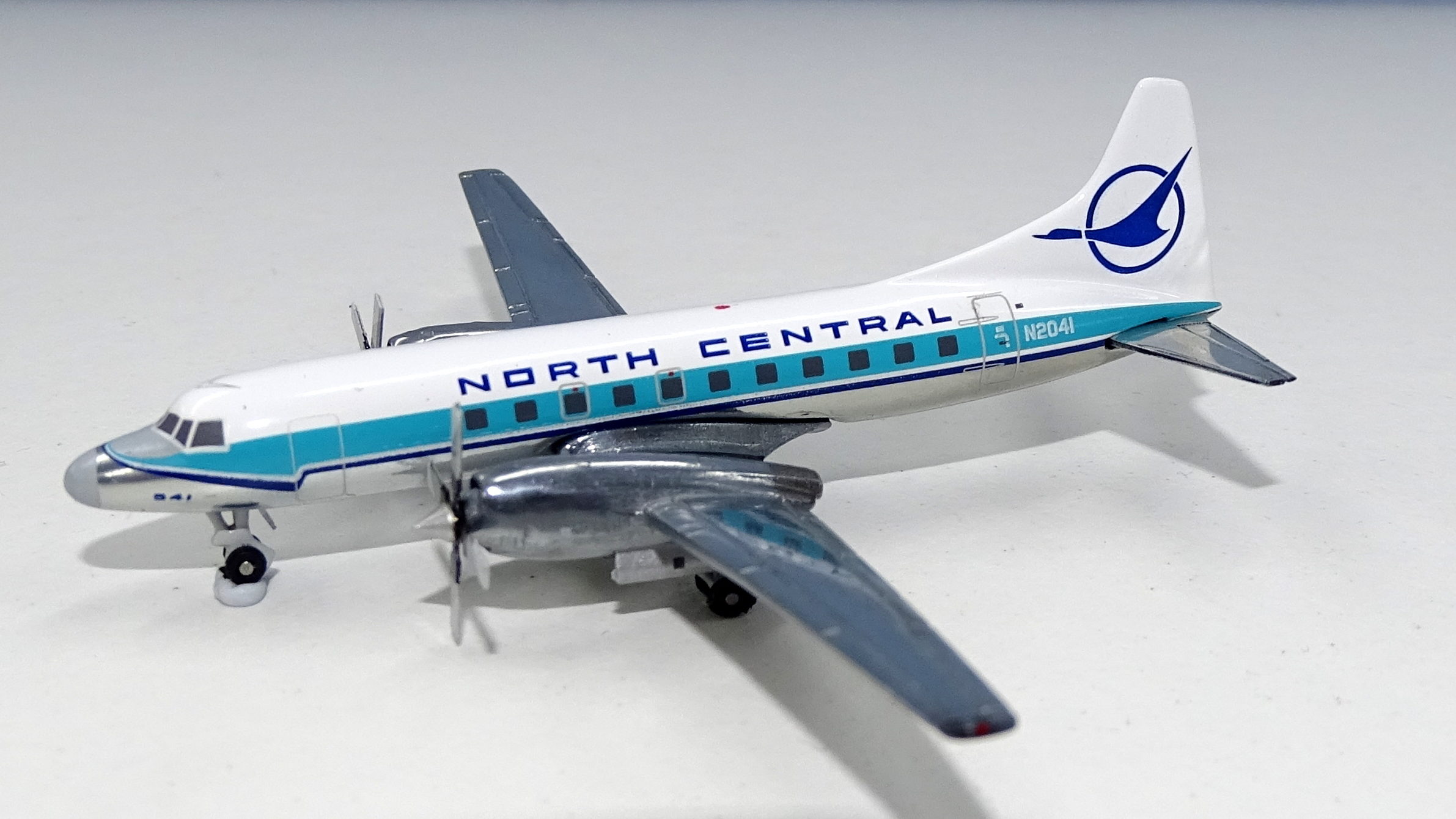 Most of the local service airlines had strong identities rooted in the local communities that they served. North Central had a particularly strong association as the ‘Route of the Northliners’ with a mallard duck logo named Herman. In the classic 1972 colours shown here Herman was emblazoned on the tail in dark blue. Fuselage cheatlines were in aqua and dark blue with a nice arrow type effect at the nose. The major changes from the previous late-60s scheme were the dropping of the feather motif aft of the cockpit and deletion of gold detailing.

Gemini have achieved a very nice finish with this scheme. The colours are rich and accurate, placement of the tail emblem and cheatlines is good and the square style main titles are great. The fleet number (541) is correctly printed on the nose and the grey painted nosecone is also correct. 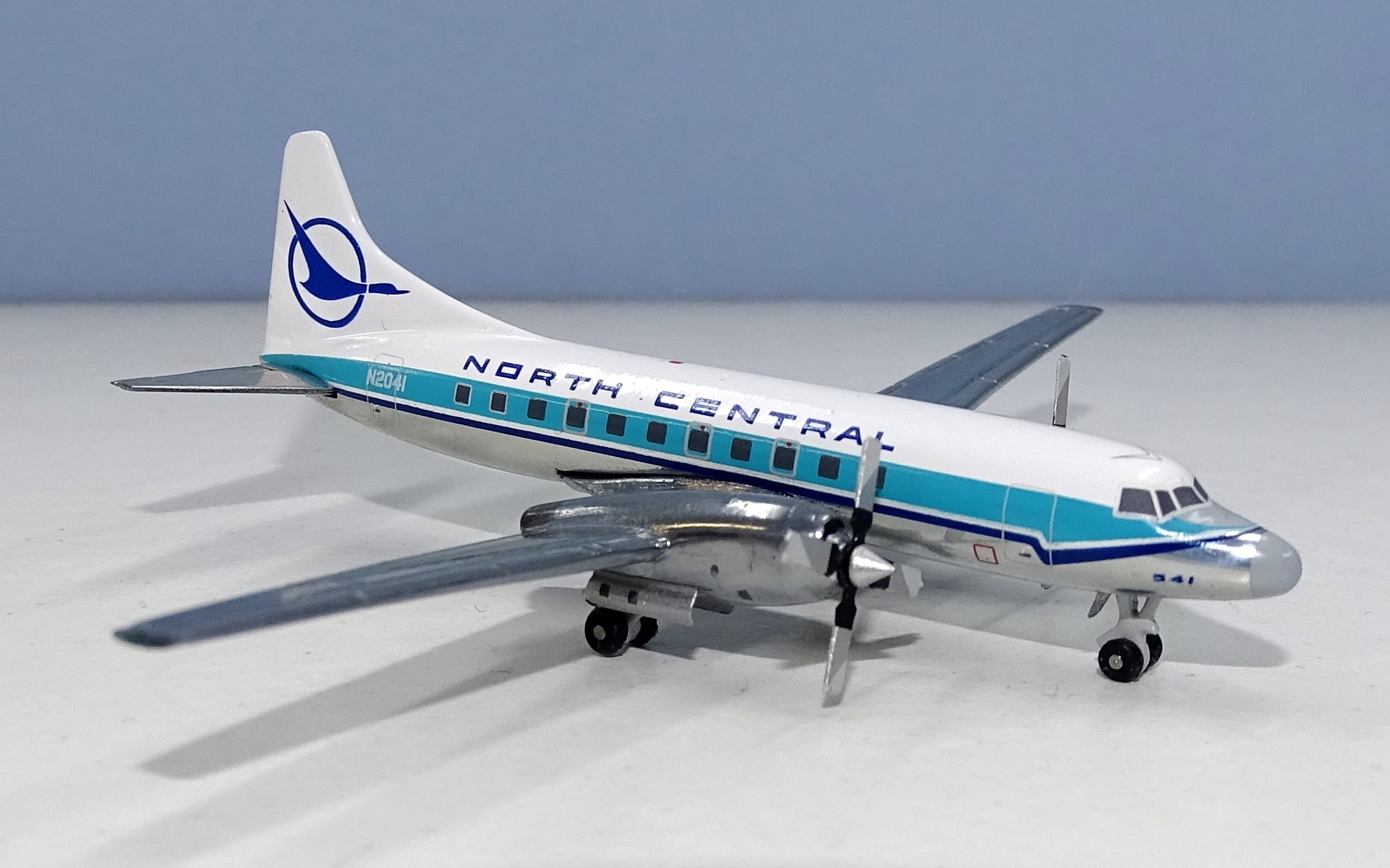 Printing on smaller models is always a challenge and since the mould itself has well-defined ailerons and flaps on the wings no extra printing is required there. Gemini have added the outline for the large forward aerial above the cockpit and some points of detail on the engines and undercarriage doors, which is enough for me. The silver wings and belly gleam beautifully too.

Construction quality is excellent and the model has the same rugged feel as the real thing does. The only issue is getting it to sit level. I have the previous Allegheny CV-580 release and it is nowhere near as bad a tail-sitter as this one so I wonder what has changed? It is actually almost impossible to get it to sit on its nosegear when facing right to left but this can be solved with a small dab of blu-tack.

Sometimes it seems smaller models are easier to make as there are less parts, but I would argue that any mistakes are magnified and can have a larger impact on the model as a whole (see the Aeromar ATR I reviewed a few years back). Gemini have done an excellent job with this model and I really wish to see more CV-580s, at least mirroring their releases in 1:200 for the type. I hope it sells well and to that end I can highly recommend adding this important piece of 1970s nostalgia, which complements my North Central and Republic DC-9s beautifully, to your collection.

An Interview with Percy Spee from No Point Airport

His son’s toy collection and an X-Plane flight simulator game helped spark Percy Spee’s passion for aviation. Little did he know, this passion would lead him to another endeavor in 2011-the creation of airport diorama products. […]

Last week, Herpa Wings announced its 11/12 lineup of models. We take a look at some of the highlights of this upcoming release. 1:87 Scale Highlights The real life Junkers model can be found at […]