There are plenty of older Aeroclassics models that are very hard to find and fetch high prices. Two of these are the Indian Airlines A300s released in 2007, one of which was a Hangar Club model. Aeroclassics has recently been looking back on its, and others, earlier production and re-releasing models, or at least producing new similar variations of them. It is pleasing then to see not only the return of the A300 mould after 5 years but also finally a standard livery Indian Airlines example.

Looking back to when Indian Airlines had a near monopoly, on domestic routes within the vast nation of India, makes me feel old indeed. The domestic market wasn’t finally opened up to competition until 1994, at the same time that Air India and Indian Airlines were changed into public limited companies. This has led to the diverse, but not necessarily healthy, market of today. Along the way all of the first batch of start-up airlines (Jet Airways, Air Sahara, Modiluft and East West) have fallen by the wayside and been replaced mainly by low-cost carriers. Air Deccan was the first in 2003 but nowadays SpiceJet, IndiGo, AirAsia India and Air India Express lead the way. Indian has itself been merged into Air India and fights out the full-service space against Vistara. The new Air India is deeply unprofitable.

Looking back to the 1980s however, and Indian Airlines ruled the skies of India. It had operated jets since 1964, when its first Sud Aviation Caravelles arrived, and during the period the Indian airlines were strong and well run. The Indian Airlines fleet became built around two types throughout the 1970s and 80s. These were the Boeing 737-200 and the widebody Airbus A300. The first three of the latter type began to arrive in April 1976, making Indian an early adopter for the, at the time, poorly selling Airbus.

The first eight A300s were all B2 series, but from March 1982 the heavier and longer ranged A300B4-203 was added. Only two B4s were purchased new and became VT-EHC and EHD. The ten new A300s were not the last to be added to the IA fleet. In August 1986 a pair of ex-Lufthansa B2-1Cs were leased from Airbus. Both had seen five months of service with the short-lived US start-up Northeastern. Unfortunately, one of the ‘new’ frames was written off almost immediately due to a birdstrike on takeoff, that caused an overrun of the runway at Madras, now Chennai, on September 29, 1986.

Another one of the A300s was written off, in November 1993, but as late as 1998 the carrier added another pair of B4s leased from GECAS. By this time the mainstay of the fleet was the Airbus A320, which the airline had also been an early adopter of, in 1989. Even so, some of the A300s continued to ply high-density domestic trunk routes until after August 2007 when the fleet was transferred over to Air India. The final aircraft appear to have been retired on March 31, 2008. These included VT-EHD, and her sister EHC, both of whom spent their entire 26-year service with Indian Airlines.

One of Indian’s A300s continues to ‘fly’ as it is parked on the outskirts of Delhi from where it offers virtual flights to the masses of Indians who have never had the opportunity to fly for real. 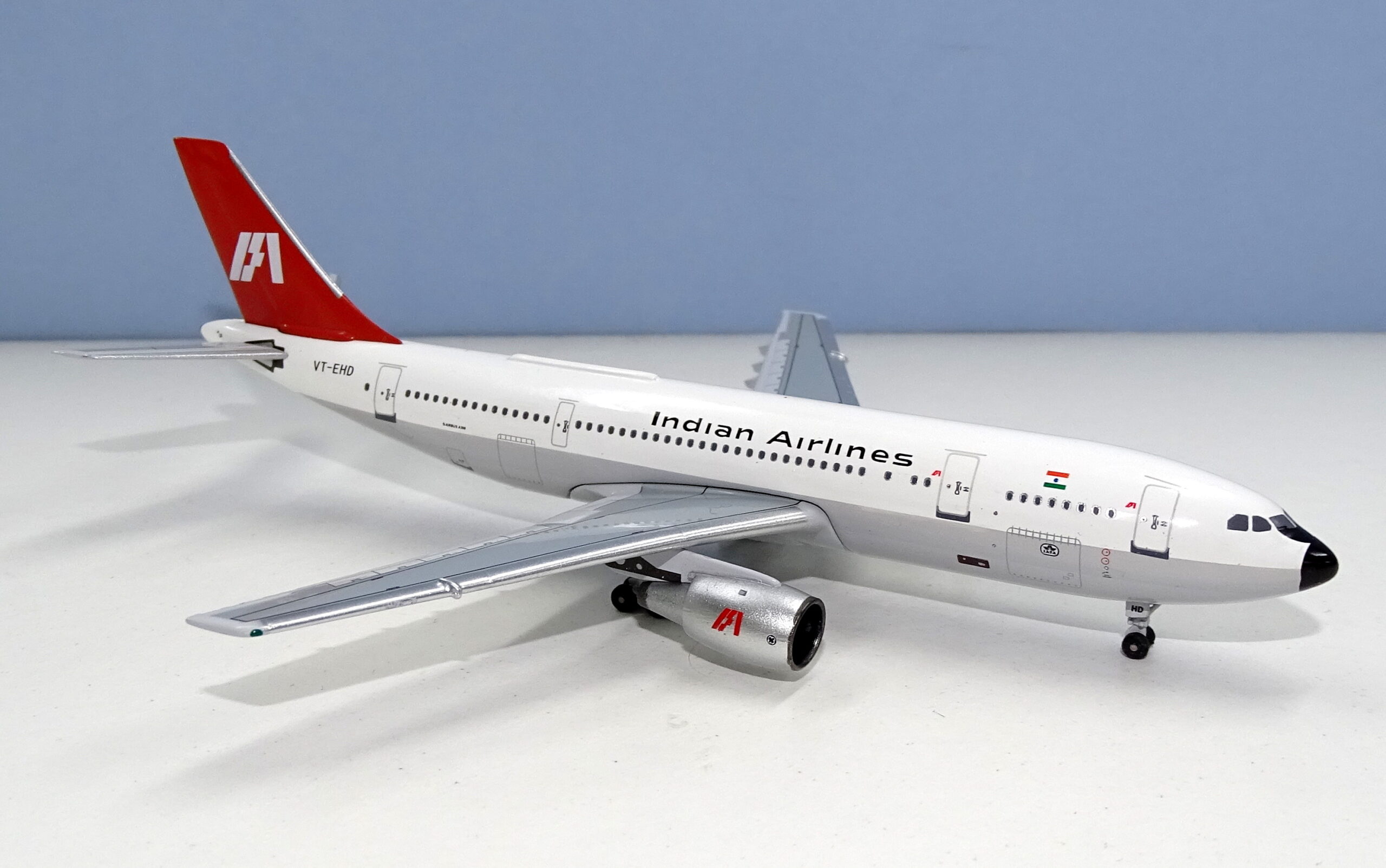 There have been 5 attempts at an Airbus A300 mould in 1:400 scale, although, as of 2019, I think only the two newest, by Aeroclassics and Phoenix, are still available for use (although Phoenix haven’t used theirs since 2014). It is my opinion that the Aeroclassics version comfortably beats all contenders including the Phoenix one.

The A300 has the classic Airbus sharply tapering nosecone and the Aeroclassics mould gets this all-important aspect correct, whereas the Phoenix competitor makes a complete mess of this. On the Phoenix mould there is almost no change in angle from the cockpit to the nosecone. The nosegear and tyres are some of Aeroclassics best and like that of their DC-8 and DC-10s are much superior to recent attempts on the 767s and Tristars.

The rest of the fuselage is well shaped and the rear fuselage near perfect. The one weakness the Aeroclassics mould has is that it is one of the last moulds to be made as a cradle fit. That means there is a seam around the wingroot and under the fuselage. Unfortunately, it is quite an obvious seam. The Phoenix mould is a year younger and has slot in wings and so no seam. It is better in this area due to that so if seams bother you, you’ll probably buy Phoenix. Not me though as I don’t think the Phoenix A300 looks anything like one forward of the wings. 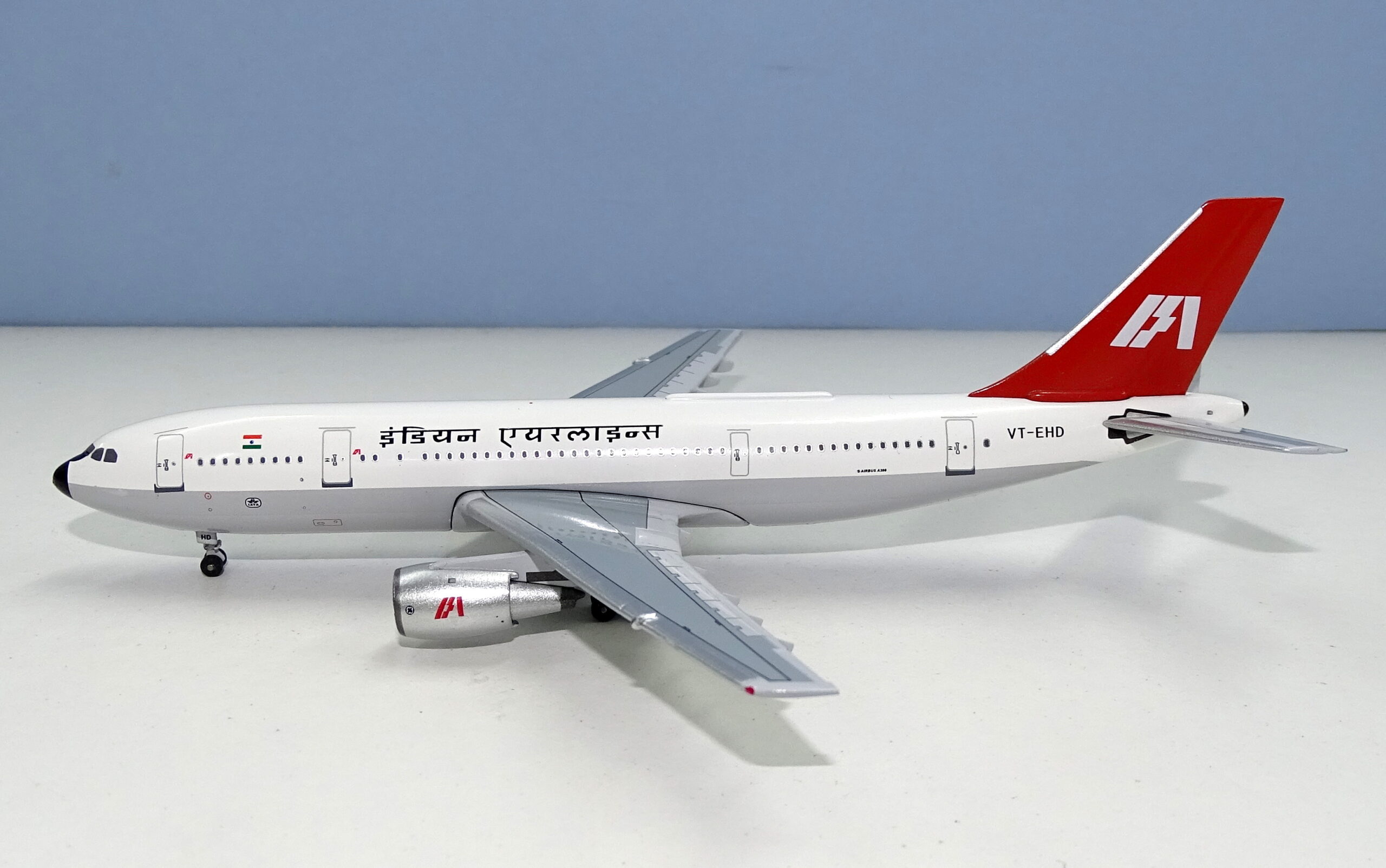 This is an A300B4 and so has no wingtip fences. The wings are very nice, as are the engine pylons. The engines are well sized and have good ground clearance, although the rear exhaust area looks like it resembles the older CF6-50C rather than the CF6-50C2 fitted to the IA A300s.

I am very pleased to see a return of the A300 in 1:400 scale. It is one of my favourite Aeroclassics moulds, despite the wing seam. Nobody else is making classic Airbuses and even if they were this version outclasses the current competition. 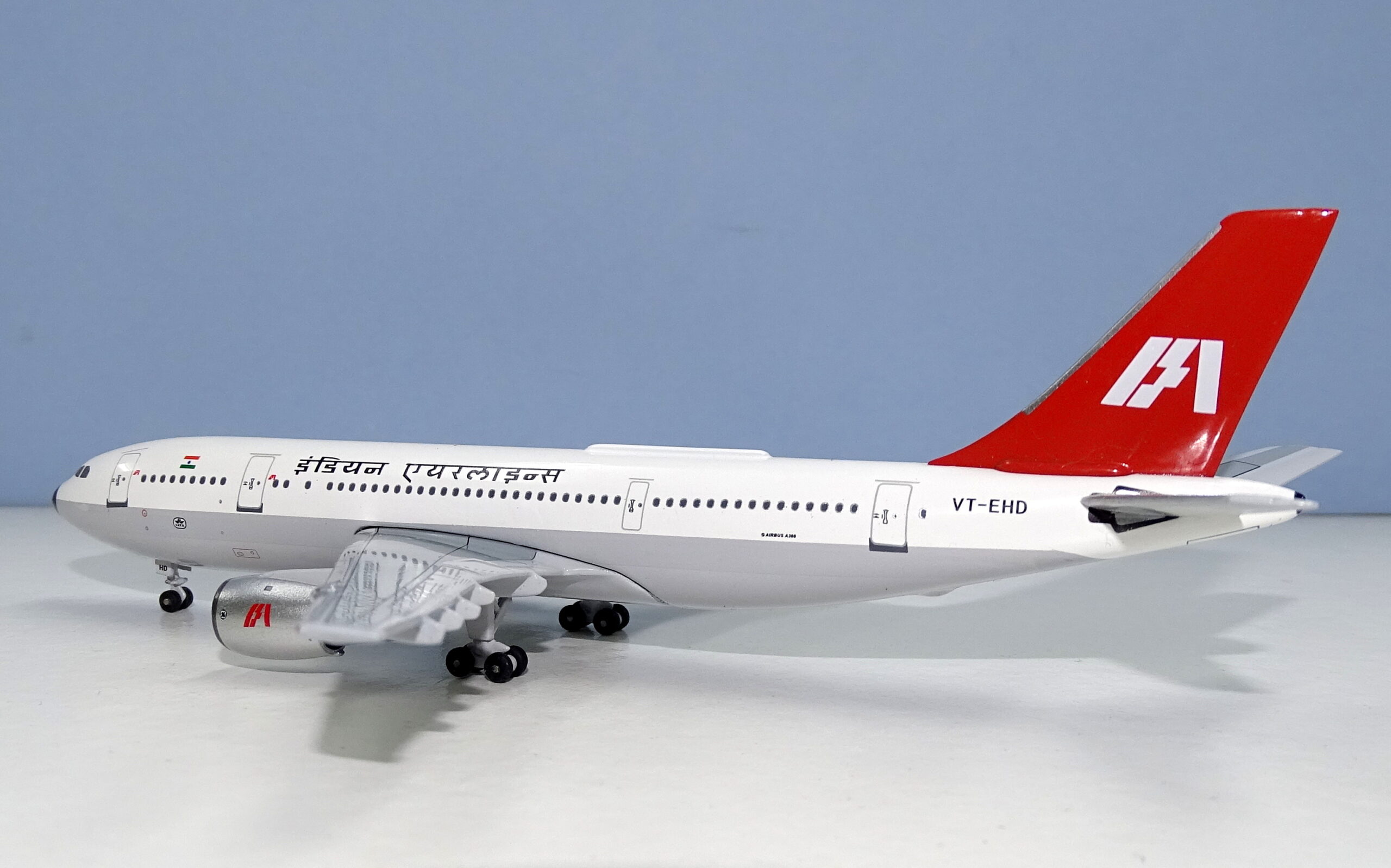 Indian Airlines never had a very exciting livery and where one of the first airlines to sport an almost naked white fuselage, albeit their HS748s and Caravelles originally had a bare-metal lower half. The A300s kept the same scheme, albeit with a toned-down anti-glare and nosecone application. They also used a light grey painted lower fuselage half rather than natural metal. The last pair of A300s added in 1998 sported an all-white fuselage for a time but this was non-standard and the scheme applied here was the livery the type wore through the majority of its Indian Airlines service. 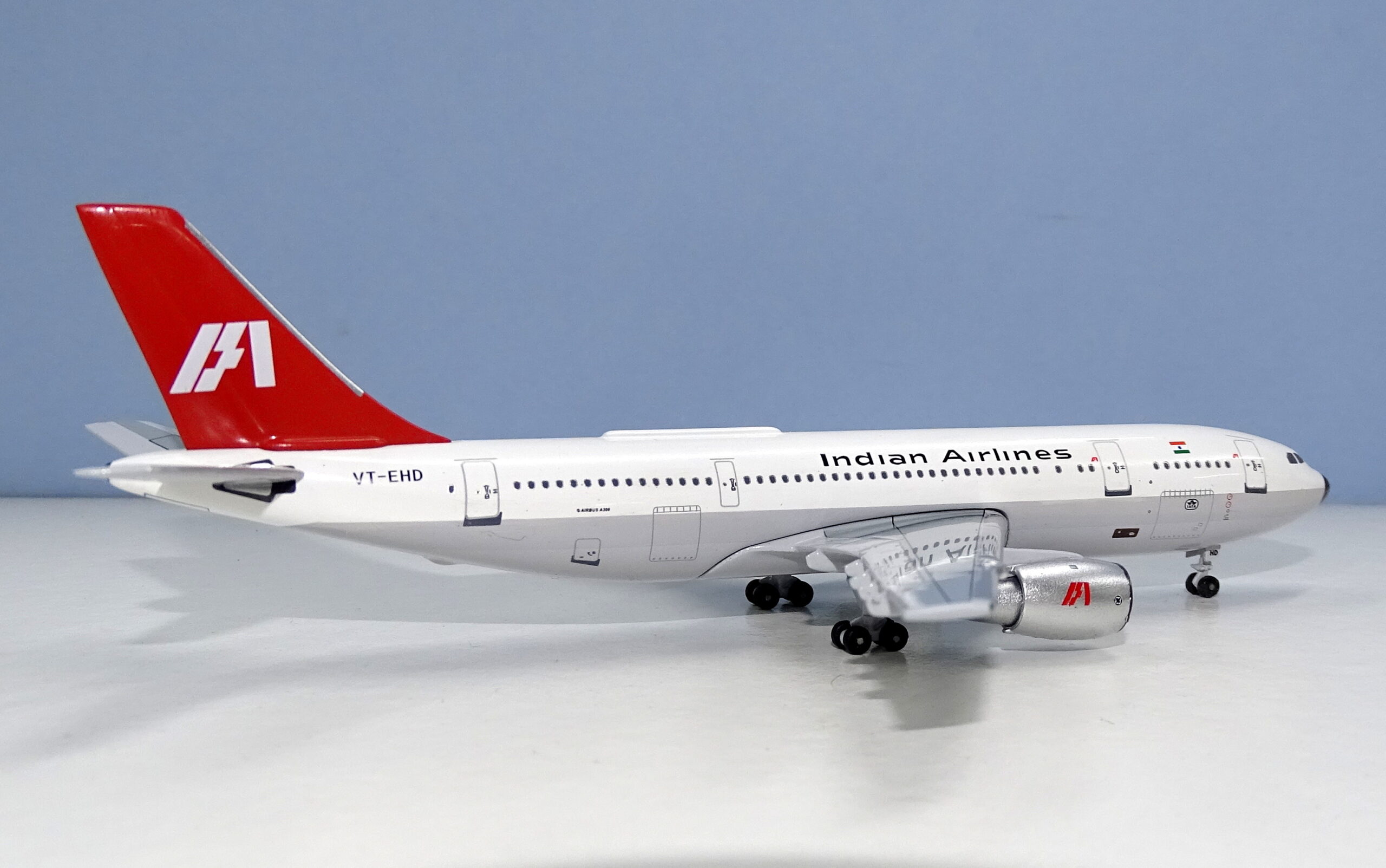 The primary colour of Indian Airlines, other than white, was a deep orange – used as the base colour on the tail. It can look quite light to quite dark in photos depending on lighting conditions and although here Aeroclassics is on the darker side I think it falls within the correct range. The gery belly colour is also fine – I’ll discuss its position in the printing section.

The stylized IA logo on the tail uses the correct font but is printed at an angle on the left-side of the tail (it is ok on the right). The logo is repeated on the engines and is also not level. The large black radome and smaller anti-glare look good but the nosecone print is not great on the right side. The main titles on either side are accurate but a little thin. The English text version correctly misses the dots of the letter I throughout.

The IATA symbol within the grey belly forward is nicely detailed and correctly has the white background. There does appears, on the real thing, to be some text at the rear fuselage within the grey but I can’t tell what it says from photos I’ve seen so it makes sense to leave it off.

Initially when I saw this release I was concerned about the cockpit printing, however I think it is just the huge black radome that makes it look unusual and it is actually correct. There is one printing problem though, which is common across Aeroclassics A300s in general. The windowline is printed slightly too high. It is probably by just under a millimeter but it does noticeably make the door and window tops a little close to the roofline and has a knock-on effect on the rest of the scheme. The grey belly line for example is also I think a small amount too high. It has been a bigger issue on some earlier releases and isn’t a major factor with this one but it could do with coming down ever so slightly. 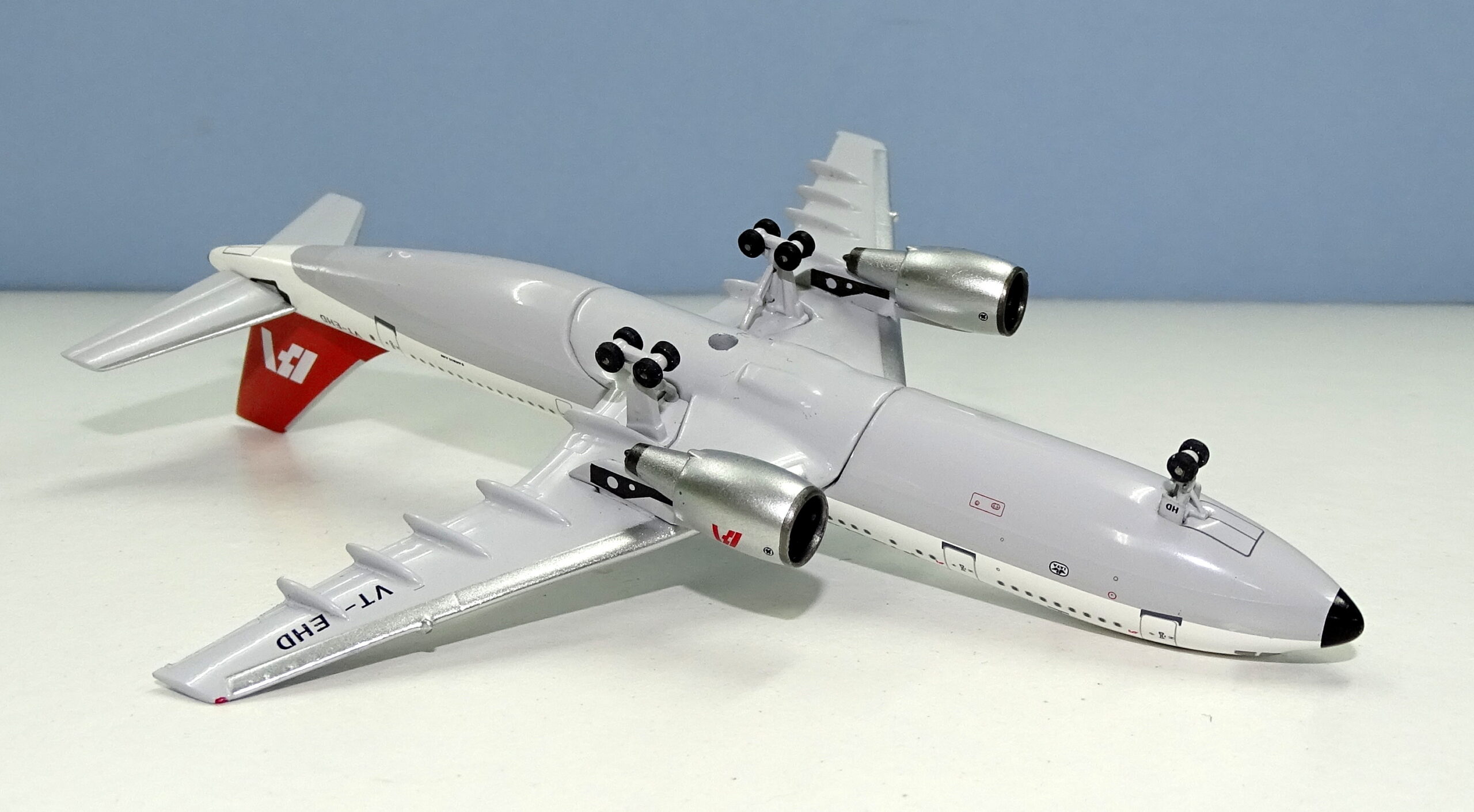 Personally, I’d like to see some engine panel line detailing and although the engine inners are nice and dark the fanblades themselves are a little too silvery for my tastes. Construction quality here is topnotch. The A300 is a solid mould and rarely has build issues associated with it in my experience.

This model gets a solid score and is a very welcome addition to my Indian subcontinent fleet. I do not expect Aeroclassics to bother making a seamless version of their A300 and am quite happy to add lots more to my collection. It would be nice if the printing could get a little attention, especially considering the recent price rise, but overall this is a fine model.

Gemini Jets do not tend to venture far from the modern US market with the majority of their releases, however one area they do appear keen on is that of Mexico and they have pleasingly […]