This is my third Gemini/JC Wings 787 review and all three have used different mould variants. JC Wings have proven to be the most adventurous company in 1/400 in 2017 so far and the idea of flaps down models is an excellent one. They have both flaps down A350s and 787s and in this review we’ll take a look at the latter.

Xiamen Airlines has long been China’s best run airline by some distance. Like most other Chinese carriers it has grown impressively in the past decade but it has done so in a manner which is the envy of most other Chinese airlines i.e. with a homogenous Boeing fleet and consistent profitability. In fact the 2015 profit of 1800 million Yuan was the 28th consecutive profit year. This is all the more impressive considering it is also China’s oldest existing airline, having been originally created as far back as July 25, 1984. The airline has gradually fallen under the control of China Southern, which now holds a controlling 55% share, but is still nominally independent and itself has controlling shares in both Hebei Airlines and Jiangxi Airlines.

The Xiamen Airlines fleet nowadays consists of 145 Boeing jets – primarily 737-800s (121). As China’s fourth largest domestic airline the company’s focus has until recently not been on international sectors but in 2014 six 787-8 Dreamliners began arriving for use on a new long haul network to such locations as Amsterdam, Paris, Sydney and Vancouver.

Xiamen Airlines became the 3rd 787-9 operator in China, following Air China and Hainan Airlines, in December 2016 when its first of six was delivered. This aircraft, B-1566 was named ‘Welcome to Xiamen’. The aircraft are configured in a two class layout seating 287 passengers (30 business and 257 economy). Domestic services began on December 10th between Xiamen and Beijing. Xiamen is planning on using its new dash 9s on its growing North American network. Seattle from Shenzhen was the first service, launched on September 26 and was followed by New York on February 15, 2017. Los Angeles is due to start in June.

I recently reviewed the new JC Wings 787-9 mould using a Hainan Airlines example and that scored very well – better even than the Phoenix mould. This mould also forms the basis of the flaps down variant of the 787-9 but has seen further improvement. As before the JC Wings mould overall is superior to the current Phoenix offering in terms of nosegear leg, rear wing detail, under fuselage detailing, wing join shaping and tailcone. It is a fabulous seamless mould. My only criticism of the previous mould was the lack of the third rooftop fuselage antenna and relief of the post wing fuselage roof bump. JC Wings have shown a real willingness to incrementally improve their moulds and it is delightful to see that this model has all 4 of the antennae in place. So in terms of the fuselage this model scores as well as the Hainan version I reviewed and even slightly better.

It is however the wings which are the main attraction on this model as they are a new moulding showing the aircraft with leading edge slats and trailing edge flaps down. Extension of the flaps increases the curvature of the wing and lowers the minimum safe speed the aircraft can be flown at. Flaps also increase drag. Flaps can be used on take-off to increase lift, and thus reduce take-off length, but do impact climb rate. More typically they are used for landing, allowing a steeper and slower approach. The Boeing 787 has both leading edge slats and also single-slotted trailing edge flaps. Other Boeing widebodies, like the 767 and 777, had more complicated double section inboard flaps but as with newer Airbuses the single-slotted design is less maintenance intensive and lighter.

Back to the model and the accuracy of the rear wing join fuselage area in the JC Wings model really helps carry off the flaps down look. Not only that but the flaps look great extended. It adds a really nice feel to the model as a dynamic machine having them extended. If you wanted to criticize I think the only thing you could say is that perhaps darker lines could be used between the separate flap elements to make the wing look less one piece. The extended leading edge slats also look great. 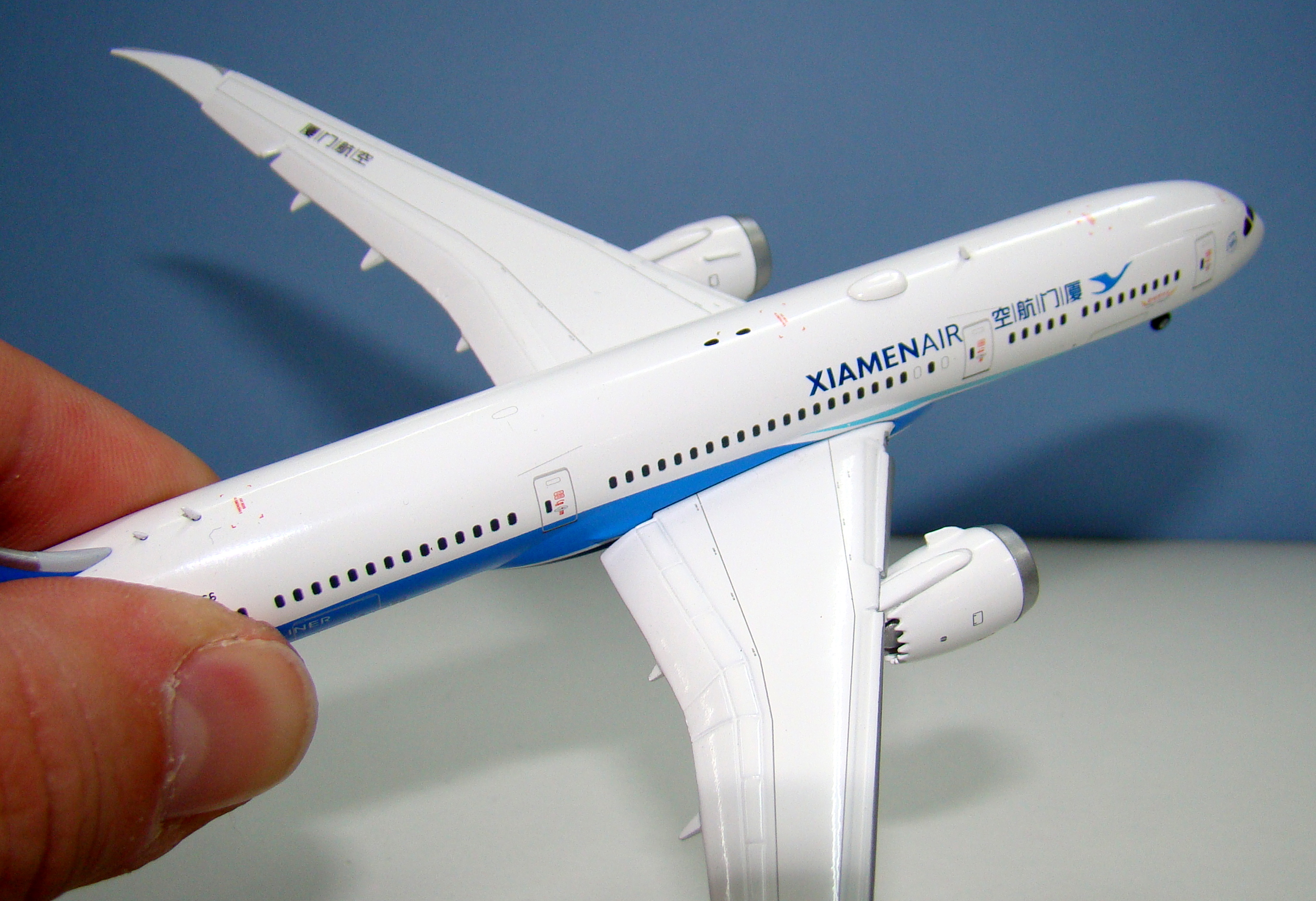 If anything it is underneath where the extended slats and flaps really come into their own as there is a lot of detailing and the downward aspect is in some ways more obvious. I should also add that the rest of the wing is great as well and this 787 has the nice wing flex of the actual aircraft well realized.

All in all JC Wings have pulled something special out the bag here. There is no criticism that really amounts to me knocking off even a point. In my opinion this is one of the finest mould combinations out there and JC wings deserve plaudits for the flaps down idea. Great work.

Xiamen Airlines has rebranded it’s aircraft as XiamenAir with only the third livery in its 33 year history. The scheme still features the carrier’s Egret logo on the tail (and next to the titles) although the bird is no longer matched with a blue circle. The scheme’s curving blue colour stranded lines are modern and works particularly well on the longer 787-9 to make a very attractive scheme/aircraft combination. It is simple but classy and based around three distinct blues.

Looking at the colours I think perhaps they are a little light across the board, especially on the lightest blue stripe at the nose. It isn’t a major problem for me however. The tail is pretty good with the Egret logo well designed and positioned, however on the real thing it is a brilliant white whereas on the model it is almost light blue.

The position of the wavy lines is good and nearly perfect. The only deviance is that the first light blue line should just cut through the wingroot but just misses it on the model. That is very nitpicky however. The titles are less of a success as JC Wings have repeated a similar error as I reported on the Gemini Air France 787 – namely the title font isn’t tall enough. On the real thing the middle of the X is above the top of the passenger door but on the model it is level with it. This isn’t a major problem like it was on the AF 787 but even so the titles are too short. It is almost as if the designer is looking at a photo shot looking up to the aircraft rather than one from above.

Other minor livery points are represented in very fine detail really well. The Skyteam logo is excellent as is the very small ‘Welcome to Xiamen’ motif just aft of the first passenger door. Likewise the DREAMLINER titles aft are well positioned and sized (though again not white enough).

Overall JC Wings have done a good job with this livery. The colour of the Egret and title height do however lose it a couple of points here.

I am continually impressed by the quality of the printing possible on 1/400 scale models nowadays and this continues here. Some people think JC print the cockpit windows of the 787 too small but I must disagree. If anything Phoenix print them far too large. On this model the printing is top notch and shows a wide range of excellent little details. I have no concerns at all in the printing department.

It is quality of construction that has been lacking across all of the major players recently but I can report with this model that is finally not an issue. The wings, satnav domes and antennae are all fitted perfectly – something I was beginning to believe was impossible. There are no paint smudges or fingerprints at all either. To top it off there are no tyre tabs, though I admit the nosegear doesn’t seem to roll. I have no problem with that (rolling gears are often a curse) and refuse to knock off any marks for it.

This is the first model to score full marks in the quality department of all my reviews so far.

What can I say – this model is close to perfection. With just a small amount of extra attention to livery detail it would gain 100%. As it is 28 is the best score I have been able to give out so far. If only JC Wings could keep this kind of quality up all the time they would blow Phoenix out of the water. Nevertheless this is a beautiful model with great innovative details for a lovely aircraft and one of the world’s best airlines. Get yourself one!