Deregulation and a failure to adapt to new market realities has been the grave of many proud names in aviation history. None are prouder than Mexicana de Aviación, which over the years graced us with a variety of wonderful liveries. The recent release of this example from their fleet gives an opportunity to also look at an example of Aeroclassics’ A319.

The collapse of Mexicana de Aviación on August 28, 2010 was a watershed moment for the Mexican aviation scene following over twenty years of turmoil since the Mexican aviation market was deregulated. The airline had been privatised in 1990 only to be renationalised in the mid-90s as the Mexican economy nosedived. Mexicana was sold to Grupo Posadas in 2005 at roughly the same time as the next wave of new entrant airlines (mainly Volaris, Viva Aerobus and Interjet) entered the scene.

The new competition from true low cost airlines in concert with climbing oil prices, a worldwide recession, a swine flu epidemic and rising drug related crime, which all combined to damage both business and tourist traffic, led unsurprisingly to a raft of bankruptcies amongst the established airlines, like Aero California and Aviacsa. Mexicana itself began to rack up debt as it attempted to compete and also set up subsidiaries like Mexicana Click which were better suited to the new market normal as they had lower operating costs. In the end a combination of these factors plus the intransigence of the employee unions would lead to Mexicana’s total collapse.

Mexicana had been an early operator of the Airbus A320, but had struggled to replace its old 727 fleet totally. From December 2001 it added the smaller A319 to the fleet and gradually grew a fleet of 27 of the small jets, as Fokker 100s were swapped to other subsidiaries. The majority of these aircraft were leased and came from a variety of sources including ILFC, CIT Aerospace, GECAS, Aerventure and others. Most of the aircraft were N registered but with an MX suffix. N750MX was delivered new from Airbus after a first flight on May 8th as D-AVYB and named ‘Vamos por todo’ – roughly translated as “Let’s go for everything’.

Following Mexicana’s collapse she was stored. Her next lessee was MIAT Mongolian where she was named ‘Nirun’ and registered JU-8889 in March 2012. Subsequently she switched to the Mongolian airline Hunnu Air but was returned to Aviation Capital Group in November 2014. She was still stored at Victorville in September 2015. 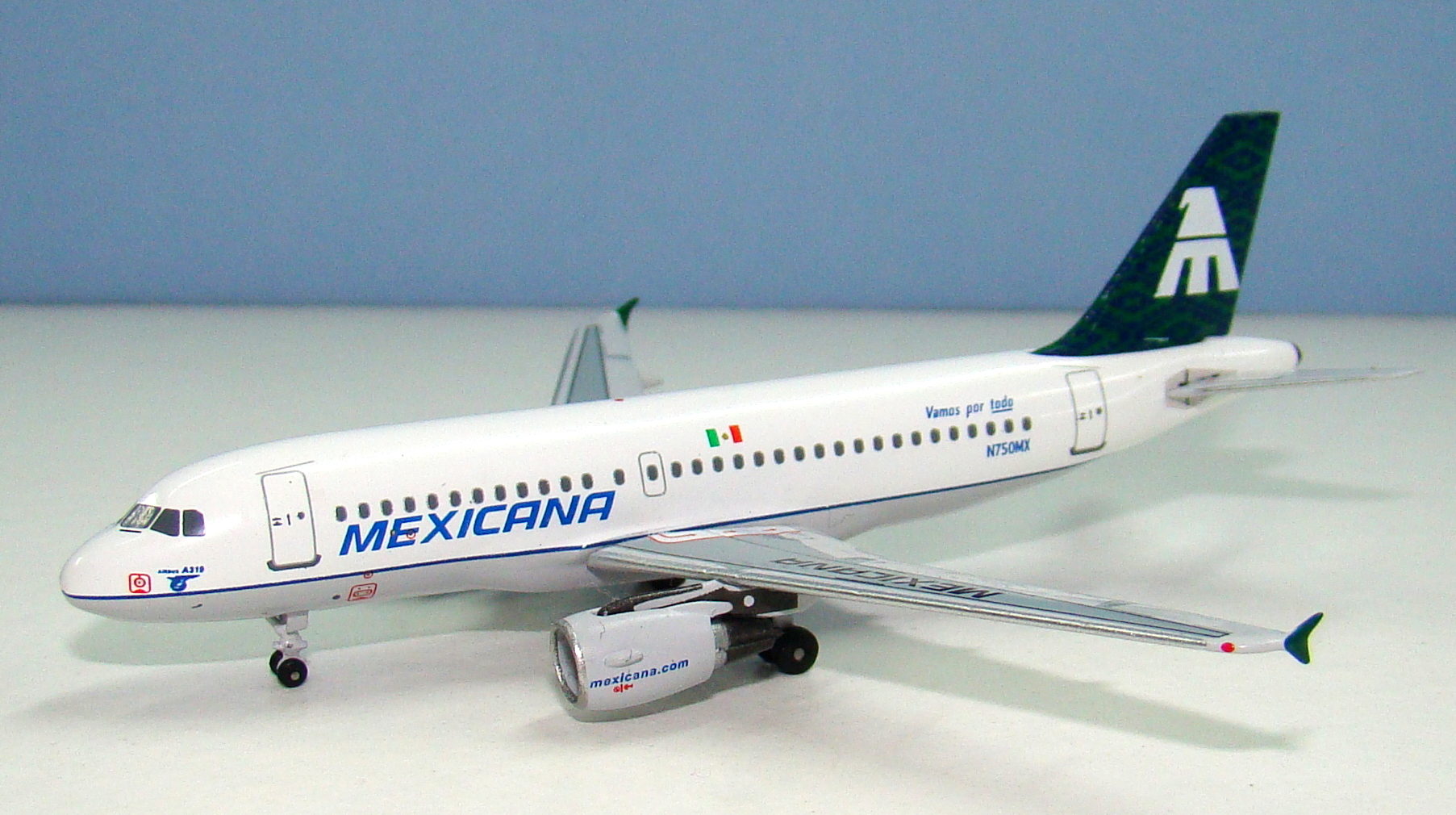 It is widely recognized that the Aeroclassics baby buses are the best available, certainly they are ahead of anything made by JC Wings, Gemini Jets or Phoenix. Nobody else has got the shape of the fuselage so accurate. The nose, wing join and tailcone are all faultless.

The wings are also thin and detailed with excellently shaped winglets. Whereas it is possible to criticize the IAE engines of the Aeroclassics buses the CFMs, as worn by this release, are very good. Obviously being Aeroclassics there are no aerials (there should be 4 here) or satnav domes on the model and I admit I increasingly miss them, however it isn’t a dealbreaker when the rest of the mould is so fine.

In fact for me the worst part of the mould isn’t the lack of aerials but the length of the nosegear and the tiny nosegear wheels. They make the model too low at the front, whilst the tyres are merely rubber rings on spigots with no discernible wheelhubs at all. This is an issue that is well documented but Aeroclassics seem to have no interest in doing anything about it.

Following privatisation Mexicana introduced a new livery in 1991, with a variety of individually styled tail designs which were handpainted onto the aircraft. The adoption of these designs was never fully realised due to the high cost of maintenance and instead the airline chose a modified version of the green Iztaya design, which had been one of the more widely worn of the livery variants. The scheme was modified so that the tail colours didn’t move onto the rear fuselage and a thin stripe split the grey belly from the white fuselage.

This scheme survived until 2005 when a rather bland modification saw the tail modified to a block colour with a logo that didn’t fit on the stabiliser. Finally in 2008 a unique and interesting two tone blue livery was put into play. This model wears the pre-2005 colours and compares interestingly to the several recent DC-10s in the earlier ethnic tail schemes.

Aeroclassics regularly have issues with the darkness of their colours and once again it rears its head with this release. The green of the tail design is way too dark, so dark in fact that except for in the brightest light the tail design is rather obscured. This is a shame as the tail design itself is beautifully recreated. The Mexicana bird logo on the tail is nice, however it has clearly been printed over the tail design, which if you look closely you can still see through the white.

The main titles are also oddly coloured. I have no problems with the font but on the model they are blue whilst the photos all tell a story of black. The winglets show no hint of the tail design on them as they should, although they are so dark it is hard to be certain.

On the plus side the smaller details of the livery such as the ‘Vamos por todo’ titles, Mexicana logo forward, Mexican flag and registration are all very nicely done. It is a shame that once again the colours are so far off as to spoil an otherwise good livery effort.

Printing detail is good but not exceptional on this model. Most obviously the outlining of the wing to fuselage fairing is absent as are the admittedly feint lines on the nosecone. These are far from major things but less good is that the port side engine cowling’s mexicana.com titles are not printed straight (they are on the starboard engine). In some photos the aircraft has 750 on the nosegear doors but it is absent in others so this is not an error.

The model falls into the silver fanblade category with no hint of a more realistic colour tone. It does however come perfectly built with no QC issues in regards to the components. People often complain about the nosegear tyres falling off but I cannot say it is ever an issue for me (the same can’t be said about Aeroclassics 707s and DC-8s though).

I’ll admit I was expecting this model to score more highly than it has after I have taken a detailed look at it. That is a little disappointing, however the model overall is still a sound purchase even if it does only just slip over into the acceptable range. Aeroclassics Babybuses are, or ought to be, excellent given the pedigree of the mould but once again greater attention to the final finish would easily elevate this release into a much higher range. The issues are all relatively minor in of themselves but add up to knock quite a few points off the final total.

Phoenix seem to continue on oblivious to the rest of the 1:400 world producing much the same types of model as they have done for years now. That would not be so damning if their […]

The march to produce the entire back catalogue of at least the big 3 Chinese airlines continues with the aid of the impressive combined mould inventory of JC Wings and Gemini Jets. The month of […]