I must be getting old for an A340-300 to be almost considered a classic, and admittedly Gemini Jets have made an aircraft/livery combo that dates only to 2016 and only incidentally stretches back to the mid-90s, but nevertheless the days of seeing this aircraft type in service are numbered. As such it is a delight to see this model made, especially by Gemini who rarely make anything verging on the pre-year 2000. Even better it is in Iberia’s lovely old scheme so let’s hope they’ve done a good job.

The Airbus A340-300 was a major breakthrough for Airbus pushing it into the true long-haul market, alongside the smaller A340-200, and dealing a killer blow to McDonnell Douglas’ MD-11 trijet. The arrival of the Boeing 777-200ER seriously hurt the A340 however and the massive improvements in the A340’s twin engine sister the A330 has seen it eclipsed. In hindsight it was in many ways a transitional aircraft but despite the influx of A330s and 787s, in early 2017 a creditable 115 of the 218 built still remain in service including with some major airlines like Air France, Lufthansa, SAS and Swiss.

Iberia has long favoured four engine aircraft for its largely latin america long haul network, which often requires aircraft with good hot and high capabilities (something that favours a 4 holer). It was operating 12 DC-10-30s and 6 747-256Bs in the early 1990s but began to take delivery of 20 A340-313s from February 1996 with which it replaced its entire long haul fleet. The last new aircraft a series 313X arrived in December 2002 and the year afterwards deliveries of the larger A340-600 began. Even so another pair of A340-300s were added on lease as late as 2009.

A couple of the A340s began to leave the fleet in 2010 but disposals really began in 2013 as new A330-300s arrived. The last pair of A340-300s in the fleet were EC-GUP and GUQ, which had a special tourist configuration (Configuración caribe) with less business class seats (24) and more economy class seats (265). None of the A340-300s were repainted into Iberia’s new livery and had not been reconfigured meaning they lacked such things as personal IFE in economy.

EC-GUP operated the last scheduled flight between Panama City and Madrid on October 31, 2016 however she was used as a backup aircraft into mid-November. Many of Iberia’s old A340-300 fleet remain in service at Aerolineas Argentinas (2), Philippines (6) and South African (2) although EC-GUP is apparently slated for preservation at Madrid.

JC Wings introduced a new A330 mould in 2014 and that is what is also used for their A340, with of course new wings and engines. This mould has been used for all Gemini Jets A330s since December 2015. The mould is no worldbeater but wouldn’t be half bad except JC Wings has had major issues with the wings, which can often point upwards at a bizarre angle. I am glad to say that JC Wings have not been oblivious to this problem and in a chat with Johan Chan of JC Wings not long ago he said they were working to resolve these problems. I am happy to report with this model the wing issue does not present itself so instead we can focus on what is a decent looking A340 model and mould.

The fuselage shape is very good. The vertical stabilizer, main fuselage and cockpit area all have a nice feel to them. The wing fuselage join is excellent and underneath the fuselage the mould has excellent detailing with great moulded scoops.

In terms of antennae the mould has all three atop the fuselage but lacks the underbelly ones. The small mid-fuselage bumps are not detailed in the mould other than a printed outline. The wings on this model are excellent as are the engines and pylons.

If anything lets the mould down it is the undercarriage. As this uses the same fuselage as the A330 mould (albeit with central maingear added) it repeats that moulds error. The nosegear is slightly too far back, although the angle of the gear leg minimizes the issue it is noticeable. More annoying for me is that the gear is also a little too short. It is only a mm or so but the A330/340 have a high look to them that the JC Wings mould doesn’t replicate well. The maingear is rather fine in detail but again probably slightly too short.

Even though I have some reservations about the landing gear length and nosegear position these do not have a huge impact on the model. With the wings correctly fitted it is a good mould. If it wasn’t for the fact all the competing moulds were so strong I’d probably think it was better but it’s still getting an 8.

Iberia unveiled its new livery in October 2013 and quite frankly it is awful. A bland euro-white nothingness compared to the wonderful classic red and yellow stripes of the classic 1980/90s scheme. Apparently the company that designed it, Interbrand, were inspired by ‘the letter I, the comfort of a seat and the dynamism and movement of a wing’. So you can see their thinking was deeeeeppp. Fortunately the A340-300s never had to wear this abomination of a livery and so for this review we can focus instead on the classic and beautiful scheme of old.

I’ve got no issue with the primary colours except perhaps the white IBERIA titles are perhaps not bright enough inside the stripes. The placement of the stripes is spot on however the placement of the IB tail logo is not accurate vis a vis the rudder position. This is minor and hardly noticeable and perhaps more indicative of the rudder itself rather than the logo placement. It’s not enough for the model to lose any points. 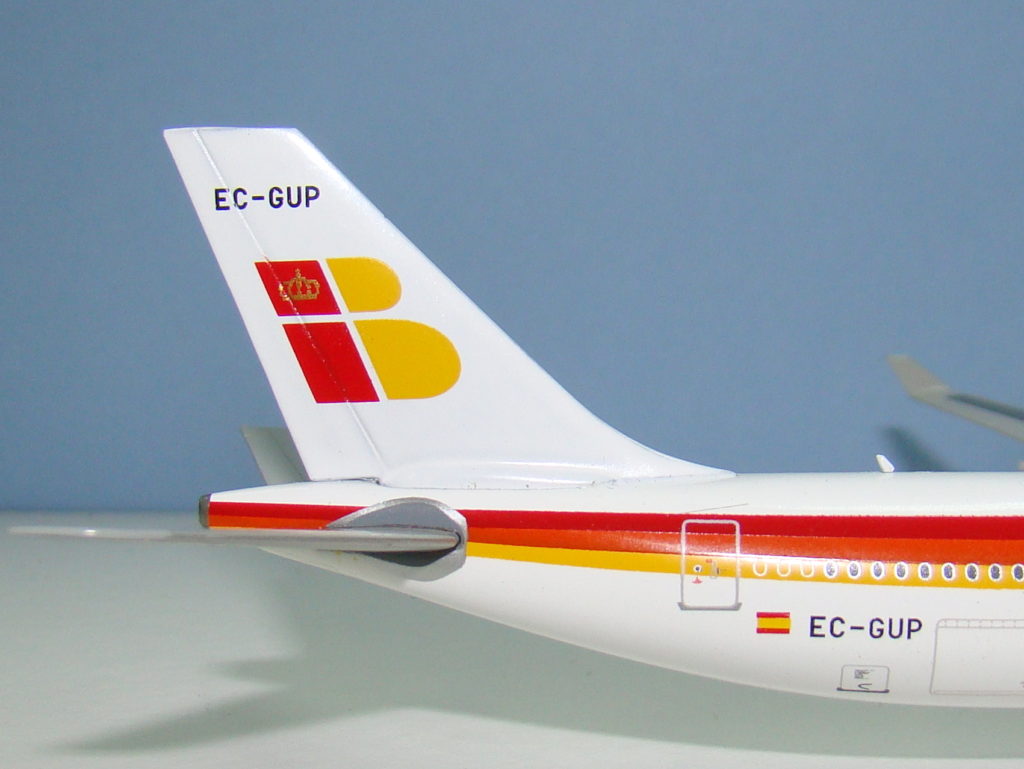 Less successful is the golden crown in the I of the tail or the tiny ‘LINEAS AEREAS DE ESPANA’ titles in the red stripe on the fuselage. As with the Continental MD-80 I reviewed the golden elements are not really shiny enough and become almost invisible at some angles. The gold on the real aircraft is always bright.

Other elements like the aircraft name, titles on the engines and registration are perfectly realized. Overall this is a great rendition of one of my all time favourite schemes. If anything the aircraft looks too clean as the real thing often seems to have been rather dirty!

I have been continuously impressed by the overall print quality of Gemini / JC Wings models. The fine details are great. I have no reason to change that with this model. I particularly like the doors, cargo holds and paneling on the engines.

What does however annoy me with JC Wings / Gemini A330/A340s is the cockpit windows. The side windows are too large. It is the position of the lower margin which is incorrect. It should be almost in line with the bottom of the front facing windows but is lower on the models. This is a regular issue. The shape is otherwise good and this isn’t by any means a deal killer like the awful windows on Phoenix 737s, but it is a little annoying as the cockpit windows have so much to do with the overall look of the model.

Down to quality of build and this is a beautifully made model. Everything is in place and there are no leftover nasties from the workers putting it together. All the gears roll and the tyres look good too. I wish everything came from the JC Wings factory like this.

This model just slips outside my collecting criteria and as such I would have not paid much attention to it, especially given the JC Wings A330/340 mould’s well publicized wing issues. I would have been wrong to do so however, as Gemini have pulled off a real gem of a model here and a fitting tribute to Iberia’s long haul workhorse of 20 years.

Diecast aircraft collector Angel Alvarez has an extensive collection of 1:200 scale diecast model aircraft. As part of this week’s Collector’s Spotlight Series, we had a chance to chat with him about his passion for […]