I was shocked to see that in the hundreds of reviews I’ve done over the past few years I have only reviewed a handful of 747s. Upon reflection this shouldn’t come as a surprise since the 747 is nowadays one of the most poorly represented major aircraft in 1:400 and bizarrely one of few that has lower quality used moulds available now than it had in the past. With the Phoenix 747s being a complete write-off and BigBird Mk3 being AWOL, it falls to JC Wings / Gemini Jets to represent the Jumbo. Even in 2019 there are new operators of the type and one of the most recent is SF Airlines. 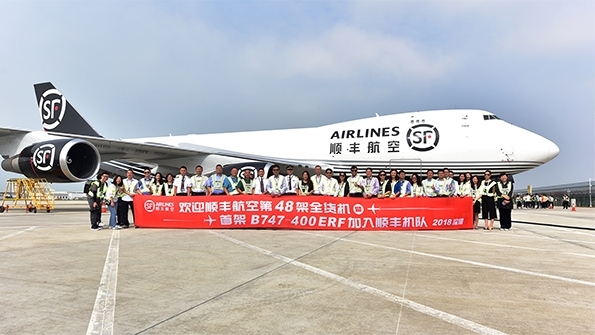 I have reviewed a ShunFeng Airlines model already (see Perfect Package: SF Airlines Boeing 757-204F B-1578 by JC Wings) and so briefly touched upon the rise of the small package market in China and the transition of SF Airlines to become the nation’s largest all-cargo airline. The backbone of the airline’s fleet has been narrowbodies and it was only in late 2015 that the first 767 was acquired. Today there are seven in the fleet but that compares to 25 757s and 17 737s. Very recently the airline has acquired also a pair of 747-400ERFs and their acquisition made headlines.

Usually an airline buying a couple of used 747s isn’t big news but it was the manner of the purchase that made this sale standout. The aircraft were 2007/08 build freighters that were part of a package of three for sale via auction at the Alibaba owned e-commerce website Taobao. They had previously served with Jade Cargo International, which was a joint venture involving Lufthansa Cargo. The airline had begun operations on August 5, 2006 but never found a successful niche and collapsed on December 30, 2011 following a major downturn in the China-Europe freight market. See my blog entry Cargo 747s in China Pt2: Jade Cargo for more.

The three 747s sat at Shenzhen for many years after the restart of Jade in 2012 failed to materialize. Eventually the aircraft were seized by the Intermediate People’s Court of Shenzhen City, which over the years tried unsuccessfully to sell the aircraft at six previous offline auctions.

Bidding on the three aircraft began on November 21, 2017 at 135 million yuan and 27 bids were placed before the final sale of just over $162 million yuan each (c. USD$25 million). Only two of the aircraft were sold, the third received only a single bid, and the winner was SF Airlines. The 747s became the most expensive item ever sold by auction in China, but were still some way behind the largest ever sale in an online auction (a 2006 sale of a super yacht on eBay for $85 million).

Both airframes have seen relatively little service and so represent good value although they both require extensive heavy maintenance before they could re-enter service. In fact, the first of the pair, B-2422, was not delivered to its new owner until October 26, 2018. Her sister-ship, B-2423, is still undergoing maintenance.

It appears that SF Airlines has plans to utilize the 747s on long-haul services to New York, for which it has recently applied. Usually acquiring the rights would be straight forward but given Trump’s brewing trade war with China it is perhaps an inopportune time to seek markets in the USA.

When faced with buying the truly awful Phoenix 747-400 mould or the JC Wings / Gemini 747-400 it would have to be a monumental mess of a model for you not to go with the JC Wings / Gemini mould. Although not a worldbeater it clearly knocks the spots off of the Phoenix version and in the case of this model, where both released the same aircraft at almost the same time, anyone buying Phoenix must truly be a few sandwiches short of a picnic.

Gemini’s old 747 moulds have been around since nearly the start of 1/400 production but they are solid and reliable. In recent years they have been upgraded with new undercarriage and now aerials too, both of which are marked improvements for the original casting. The aerials (three above and one below) and the small dome on the roof are all excellent.

The tail, rear fuselage and wings are well done however the age of the mould shows in a couple of other places. The rather cumbersome wing pylon/wing join isn’t great and is a well known ‘feature’ of these Gemini 747s.  I can live with it, whilst the other negative the seam at the cradle wing/fuselage join is tastefully done. The mould would be improved if it were seamless and had better pylons but given its age it seems silly to moan too much about it.

The nose of the mould is a bit too pointy but it still looks like a 747. Ignoring the pylons this really is a very nice mould. It’s not as good as the BigBird and Witty 747s, but little is. It remains to be seen what the future new 747-400 mould, JC Wings have been working on, looks like and whether they will have a freighter variant.

SF Airlines continues to have one of the best liveries around and not just amongst cargo airlines. It fits the 747 especially well. The last time I reviewed this livery was also on a JC Wings release but although they got the livery generally correct, they in detail misprinted most of the complicated line elements. This model has a better representation.

On the 757 the colours were accurate but on this model they aren’t quite as good. The red and darkest grey are a shade too dark but the red at least is within tolerances. What is very good are the positions of the line elements that move up in a wave from the underside of the nose to the tail. The two uppermost lines curve strongly back and downwards, unlike on the 757 they are correctly positioned.

All the positioning of livery elements is in fact spot on including the rather odd washed out splodges on the rear fuselage. I’m not sure why these are present on the scheme but JC have reproduced them faithfully. 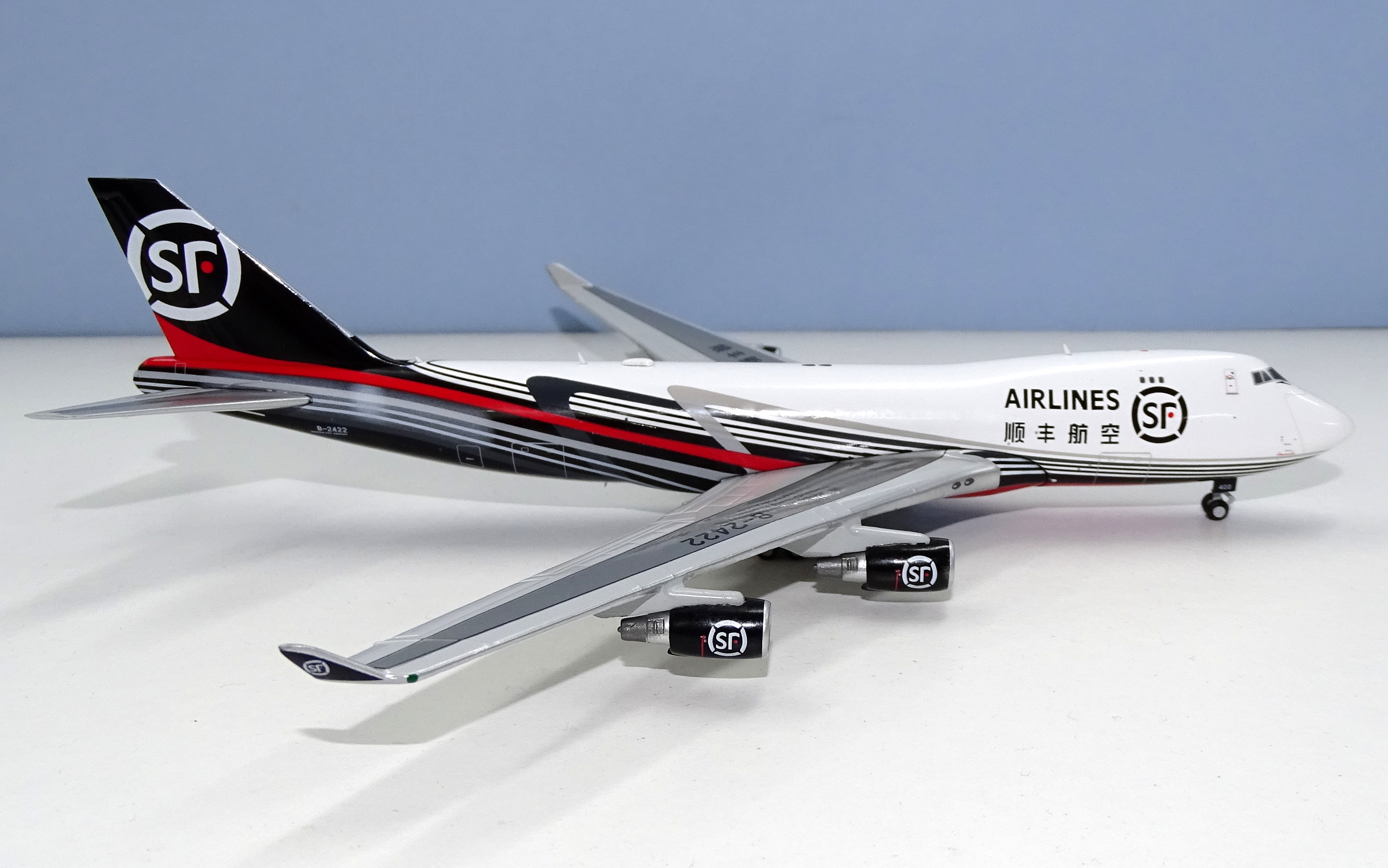 Minor livery elements such as the engine detailing, characters on the wingtops and registration are excellent. The only place where the livery printing is not perfect is the painting on the outside of the winglets. The silver leading edge is a little too thick and the black slightly too curved. 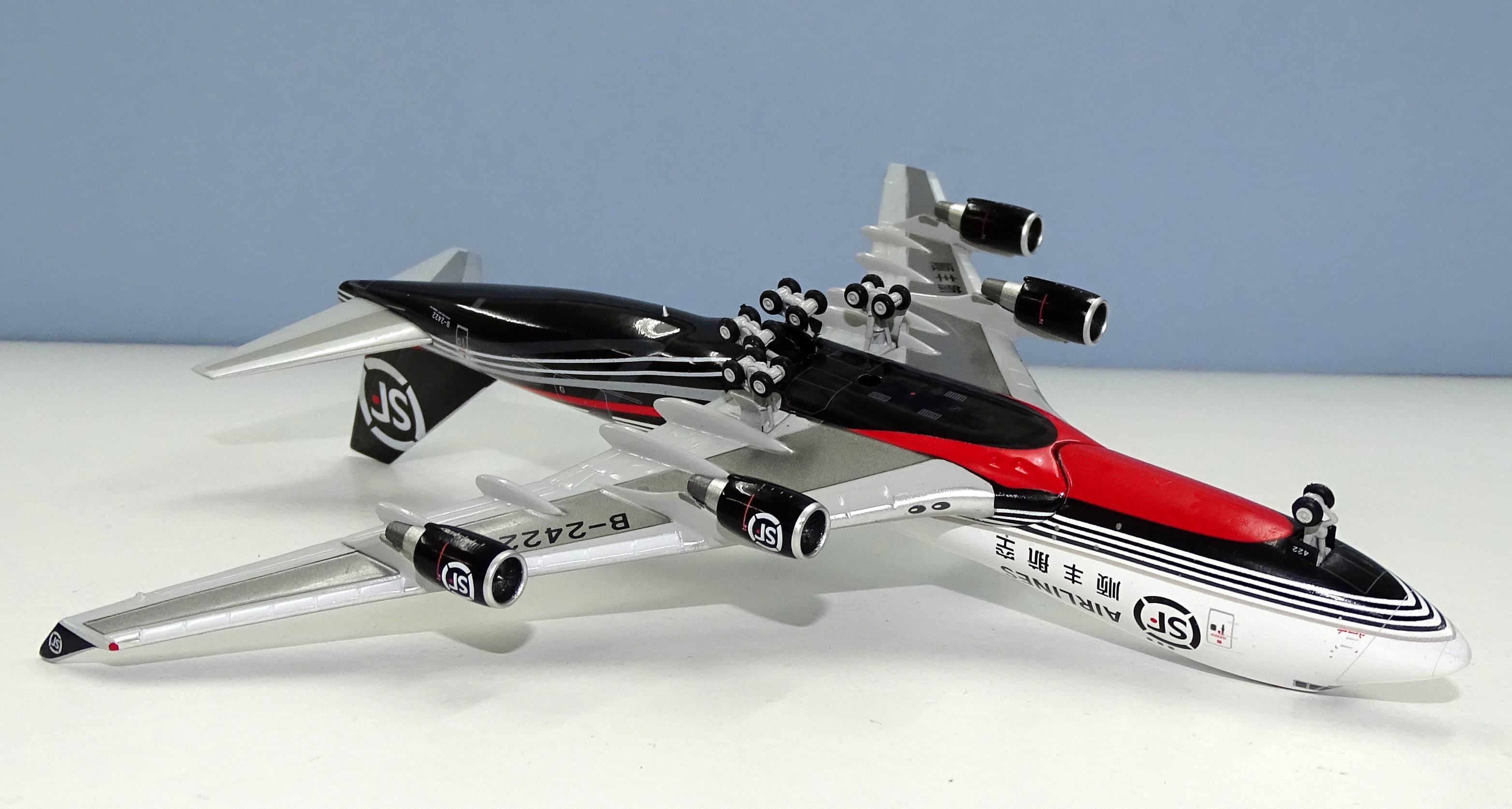 Printing on the model is crisp and the fuselage comes with excellent detail printing. This is to be expected of JC Wings models, they do generally have excellent fine printing. There are a couple of areas that let this side of the model down however. On the starboard wingtop although the registration, B-2422, is present the first 2 of it looks odd. In light you can see a smudge across it as though it was partly wiped out and touched up. It’s not hugely noticeable but in close-up the 2 has a very different form to the pair of 2s at the end of the registration sequence.

The other printing issue is also well obscured, this time by the dark and complicated livery at the rear fuselage. It is apparent on both sides of the fuselage that the cargo doors are about 2 mm too high. This is most apparent with the portside large SCD, which curves up onto the roof. Its lower margin should be lower than the aircraft registration but it is not. It becomes even more obvious when you compare its lower edge to the L1 entry door. They should of course be level. Fortunately, with the complex lines the misplacement isn’t especially noticeable and the impact on the model is decreased.

There are no problems with build quality.

As I said this would have to be an awful model to lose to the competing Phoenix example on points and it is not. It scores a perfectly reputable 25, which is even better considering the age of the original mould. JC Wings may be producing a new 747-400 mould (including a flaps down variant) but the freighter version at least still has decent life in it, aided by the fact that the competing Phoenix version is so awful.

With the recent announcement that A380 production will cease in 2021 it seems fitting that I should review an A380 in 1:400 scale, and in fact the first A380 delivered. Despite its lack of sales […]