It is no coincidence that both Phoenix and JC Wings (the latter under the guise of BBOX) have recently produced examples of this aircraft given it was relatively recently retired with some fanfare, however it was also only a few weeks ago that I reviewed the Boeing prototype N7771 by Phoenix, which is the same airframe. I assume Phoenix took the opportunity to produce the prototype off the back of the media attention – kudos to them. However, when it comes to a head to head competition between 777s nowadays my choice is usually JC Wings so let’s see how they did.

Since I just reviewed the N7771 prototype I won’t cover this airframe’s earlier career again (see Working Together: Boeing House Colours 777-200 N7771 by Phoenix Models for the details). Cathay were of course part of the ‘Working Together’ group of airlines Boeing consulted prior to launch of the 777 programme so it was not surprising that they were an early customer for the type. They ordered both the standard A model 777-200 and the initial 777-300.

The first Cathay 777-200 (VR-HNC) was delivered in May 1996 and put onto short hops like Hong Kong – Bangkok. She was followed by three sisterships prior to the end of the year and the aircraft allowed Cathay to match services to varying customer demand as it fitted neatly between the A330s and 747s. Being non-ER variants the 777-200s were really only suited to regional and medium range routes like Tokyo, Seoul, Taipei, Osaka, Bahrain and Dubai.

In fact, the first series 200s were something of an odd fit to the CX fleet as their shorter-range limited cargo capacity and they were also fitted with smaller than standard cargo doors. The aircraft were fitted in a 2-5-2 two-class configuration with 336 seats. They proved non-standard enough that during the Asian recession at the end of the 1990s Cathay apparently looked at swapping the 777s with British Airways for 747-400s, but BA wasn’t happy with the cargo doors either.

As the economy picked up the 777s gradually found their place, and the prototype, re-registered as B-HNL, joined the fleet on December 6, 2000 to make it 5 777-267s. At the same time she was zero-timed and equipped with a pair of Rolls-Royce Trent engines. The series 200s actually had a surprisingly long career in the Cathay fleet considering the number of series 300s in the fleet and weren’t retired until last year.

B-HNL racked up 20,519 flights and 49,687 hours in airline service (highlighting a low average stage length of less than 3 hours). Her last commercial service was on June 1, 2018 between Hong Kong and Xiamen after which she was stored at the HAECO base in that city. Cathay and Boeing together took the positive step of making sure this landmark aircraft was preserved and on September 18 she began the ferry flight to the Pima Air and Space Museum in Tucson, Arizona to whom she was donated.

JC Wings 2018 Boeing 777-200 mould is based off of their series 300 mould and despite the long-standing quality of the Phoenix 777 it is the JC Wings moulds which are now my favourites. It  is a superb representation of a triple 7. There is absolutely nothing wrong with the fuselage mould. The shape is perfect and there is plenty of detailing like the scoop inlets on the underside forward of the wings and the complicated asymmetrical APU tailcone.

All the major aerials are represented on the mould and are nicely to scale, since this is an old 777 A model there are no Wi-Fi domes to worry about. Moving to the landing gear and it is intricately made and accurate, aside from the JC Wings standard light grey gearlegs and wheelhubs. The maingear doors and legs are some of the most detailed I have seen with multiple struts and a small triangular extra door piece on the inside edge. As with the series 300 on the underside the maingear bay doors are not just printed but also inscribed as part of the mould.

The engines and engine pylons are excellent and the see-through cores with separate fanblades are very good. JC have not gone down the rotating fanblades line as they have with the 787 and the engines realism is improved by the lack of this feature. In fact, the number, size and spacing of the blades is some of the best I’ve seen.

Since it is clearly based on the 777-300 mould it is not surprising that the 777-200 does repeat the only thing that could really be called a fault with that mould – the attachment point of the wings to the fuselage. The fit isn’t as tight as I’d like and there is a noticeable gap on the topside. 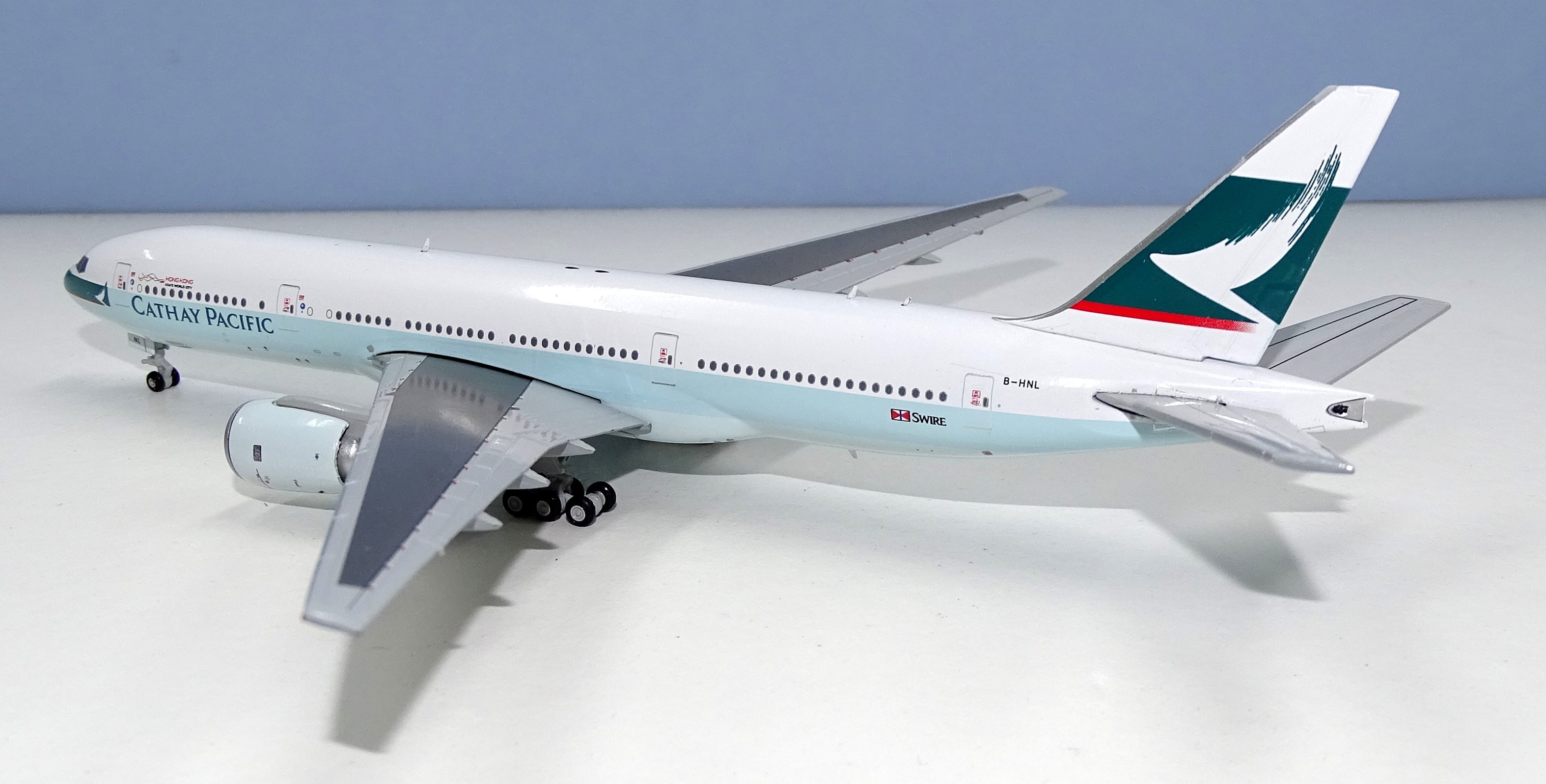 This mould has quality stamped all over it and to be fair to JC Wings they have announced a decent set of releases on it (mainly Asian majors). Hopefully there will be plenty more to come.

Even though the first 777s were delivered to Cathay with VR registration prefixes none arrived in the old Lettuce Sandwich colours and all wore the Brushwing livery. This is to my mind a true classic of design and Cathay’s best ever scheme. The new version is a dull, simplified copy of the original. The scheme has four colours: red, green, a light grey and white. Aviation400 most recently failed massively with the light grey (rendering it bluish) but JC Wings does well on the colours. Perhaps the green is on the light side but it looks good.

This is a scheme that JC Wings have some experience with so as you’d expect the placement of livery details is mm perfect, especially the grey fuselage band. The green stripe at the nose has a very thin red strip under it as it should, but I admit being somewhat red/green colour blind I had to get out the magnifying glass to see it. It is perhaps a little too thin. 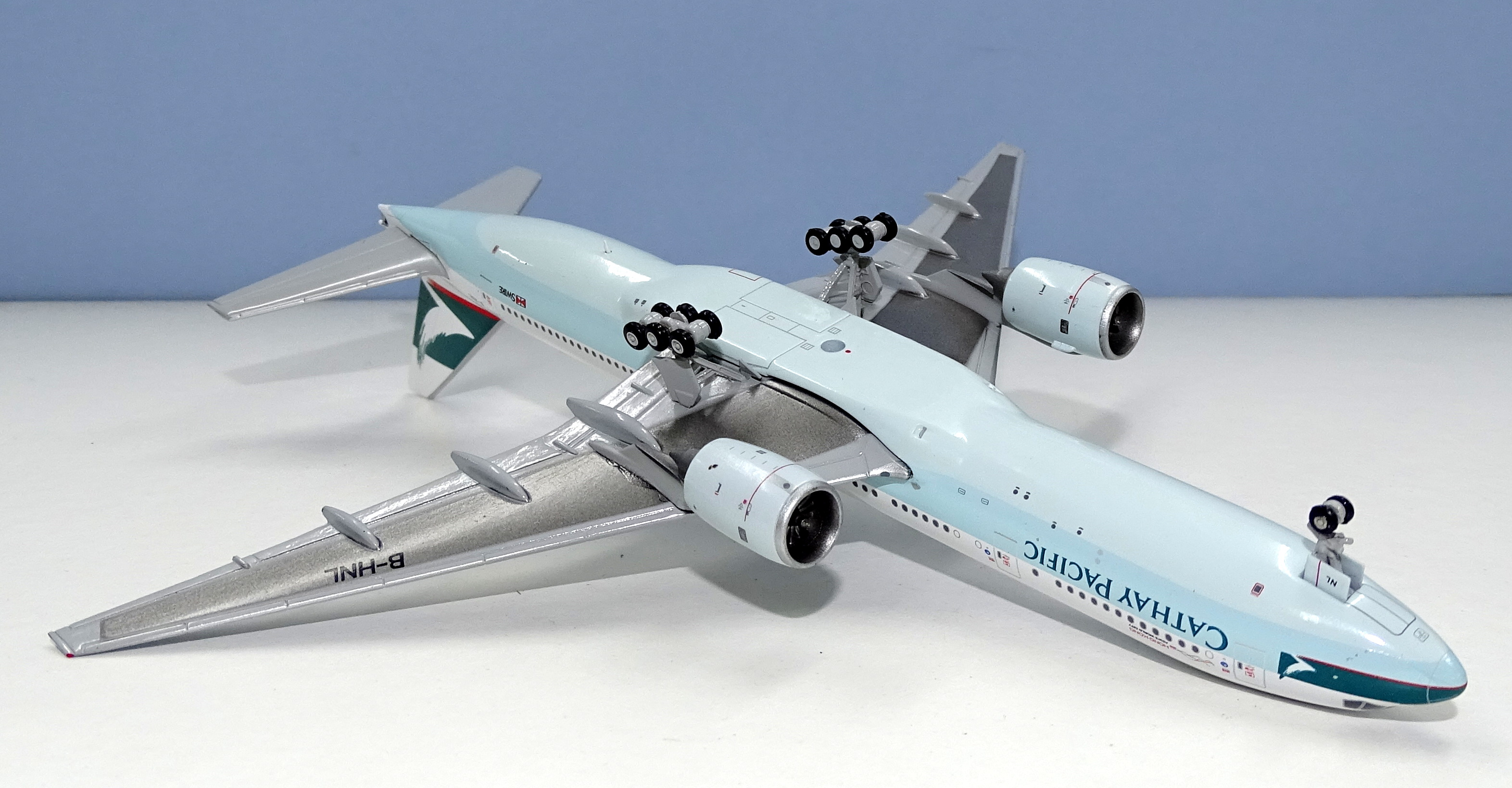 The printing on this model is outstanding showing once again that along with NG Models and Panda, JC Wings has the best printing in this scale. The detail is amazing and the definition on elements like the Trent engines exceptional. You can actually look under a magnifying glass and see the fine RR logo wonderfully detailed. 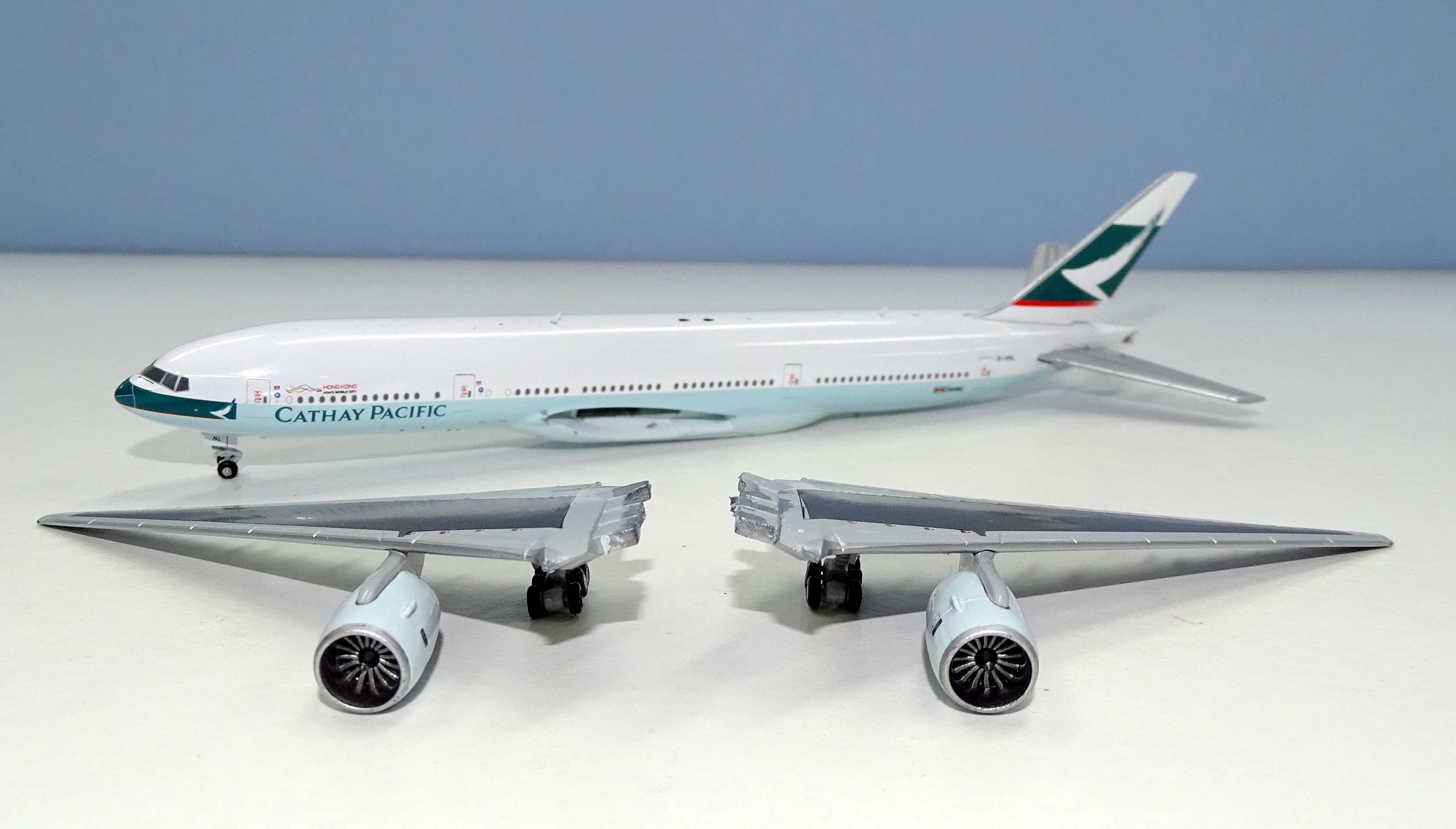 As with last week’s review the biggest issue this model has is the lack of sufficient glue on the wings, which once again came detached. There was so little glue that they came away almost completely cleanly, however the left wing has slightly scratched the fuselage just above the leading edge on the port side. The wings themselves were not damaged so were easily reattached and sit nicely even without gluing in but it is disheartening receiving models in pieces.

I can’t recommend JC Wings 777s highly enough. A fabulous casting allied to some of the best printing in 1:400 makes a formidable package. This does however make it 3 of the 7 models I’ve reviewed in 2019 (although I admit I have received more than 7 models this year) that have arrived with loose wings (and from 3 different manufacturers). For the sake of a little extra glue this wouldn’t happen. Still having seen the competing version of this model by Phoenix I can easily say that this JC Wings version is far superior.