Panda Models seems to have discovered the rest of the world outside of China in 2018 and they also appear to have been chided by competition into developing their own Airbus A321 casting, presumably in response to HYJLwings. It was always a surprise that they had an A319 and A320 but no A321 so it is a logical step and with NEO deliveries ramping up likely to be a fertile ground for them to explore. Already their releases are looking interesting and although there is overlap with HYJLwings there is also overlap with Phoenix, who probably have more to fear. 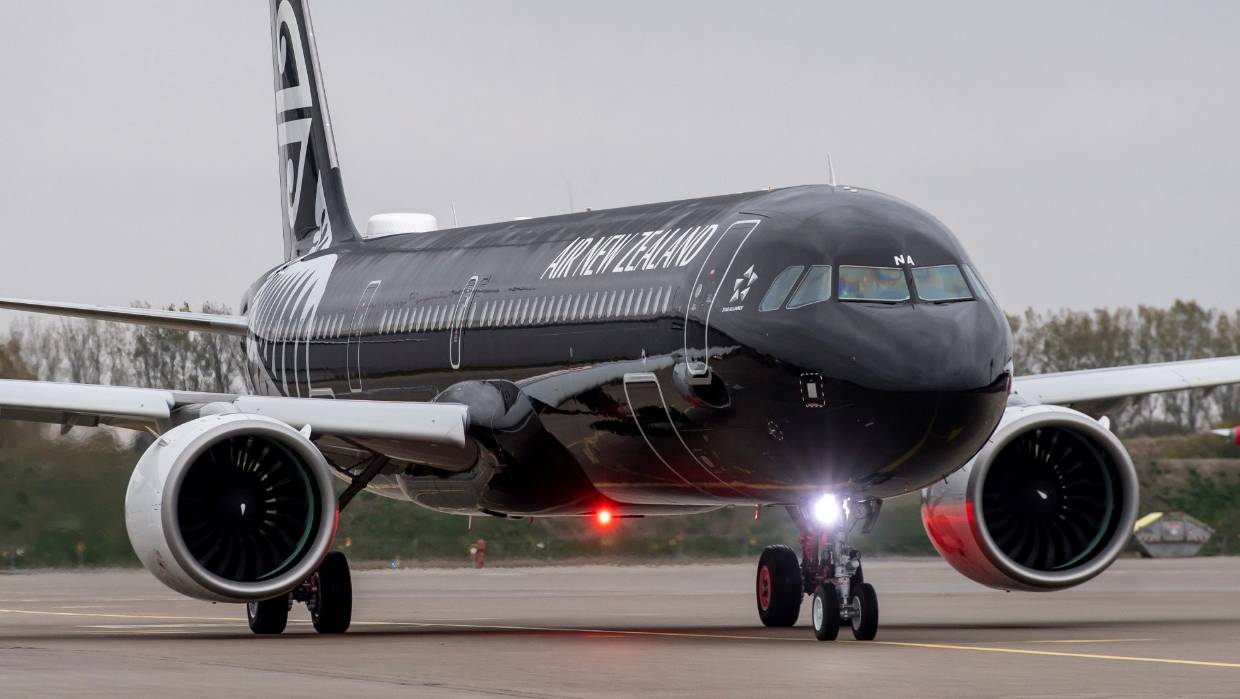 Air New Zealand has been in a purple patch in recent times with some magnificent profits recorded over the past few years. $527 million was made in 2017 and this was bettered in 2018 to the tune of $540 million (this is NZ Dollars), the second highest profit of its entire existence. This has been achieved by, and I quote: ‘strong revenue growth across the airline’s key markets, as well as continued focus on sustainable cost improvement, despite significantly higher fuel prices.’ 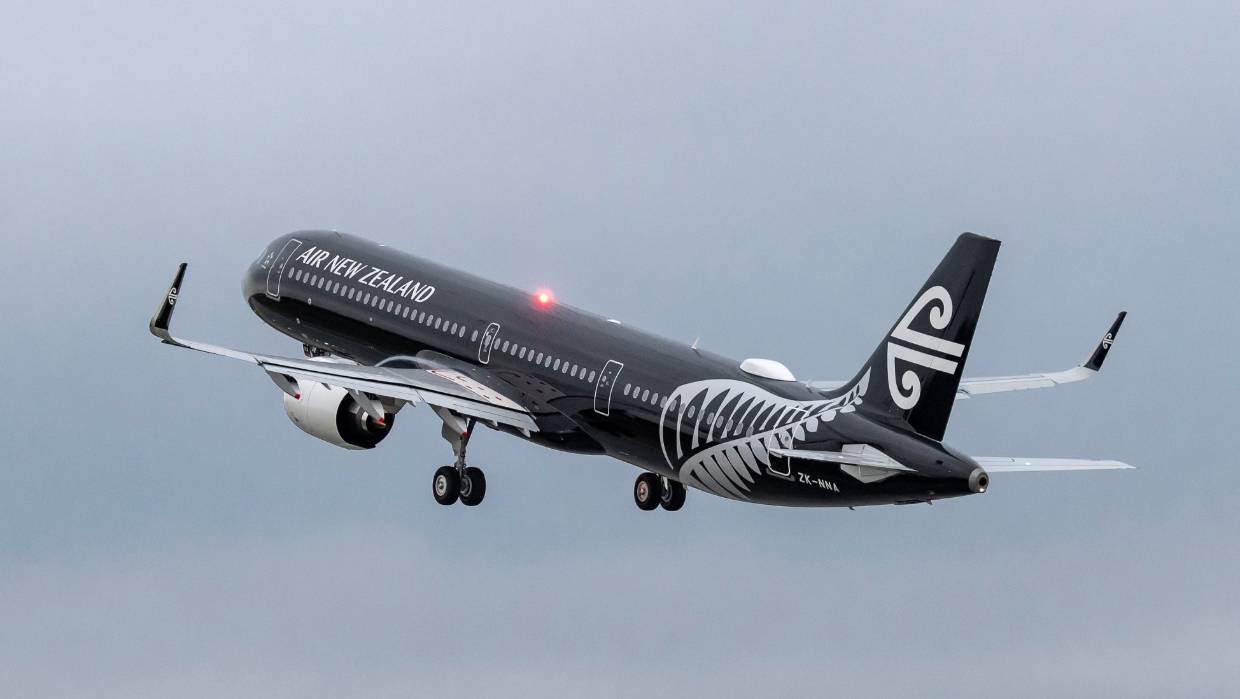 It has done so by focusing on efficiencies and its premium products whilst successfully keeping a stranglehold on domestic markets and being ruthless in cutting loss making regional routes. Although ostensibly the national airline of New Zealand it is first and foremost a heavily free market-oriented airline working for its own ends rather than the nation’s. That is perhaps as it should be but its own aims should not necessarily be swept up with those of the country it hails from.

Even so it has impressively soaked up competition across the Tasman and in Asia, especially from Chinese airlines. It has also been able to finance a modern and well-balanced fleet with 777s and 787s forming the backbone on longer sectors and A320s across the Tasman, domestically and to the Pacific Islands. The entire A320 fleet has consisted of ceo variants until recently. In 2014 the airline announced a $1.6b deal for 7 A321neos and 6 A320neos.

The A321neos will no doubt be helpful in making up for lost capacity from the retirement of the last 767-300s and have been touted as providing annual fuel savings of 15% that would save the airline $1.9 million a year.

The first Pratt & Whitney powered 214 seat A321, ZK-NNA, left Hamburg on November 3 for its four-day transit to New Zealand via Oman, Kuala Lumpur and Cairns and was put into revenue service neo November 23 as NZ739 flying AKL-BNE. As of February 2019, Air New Zealand now has three of its seven A321neos in service and the type will surely take the strain on high density medium range routes for years to come. 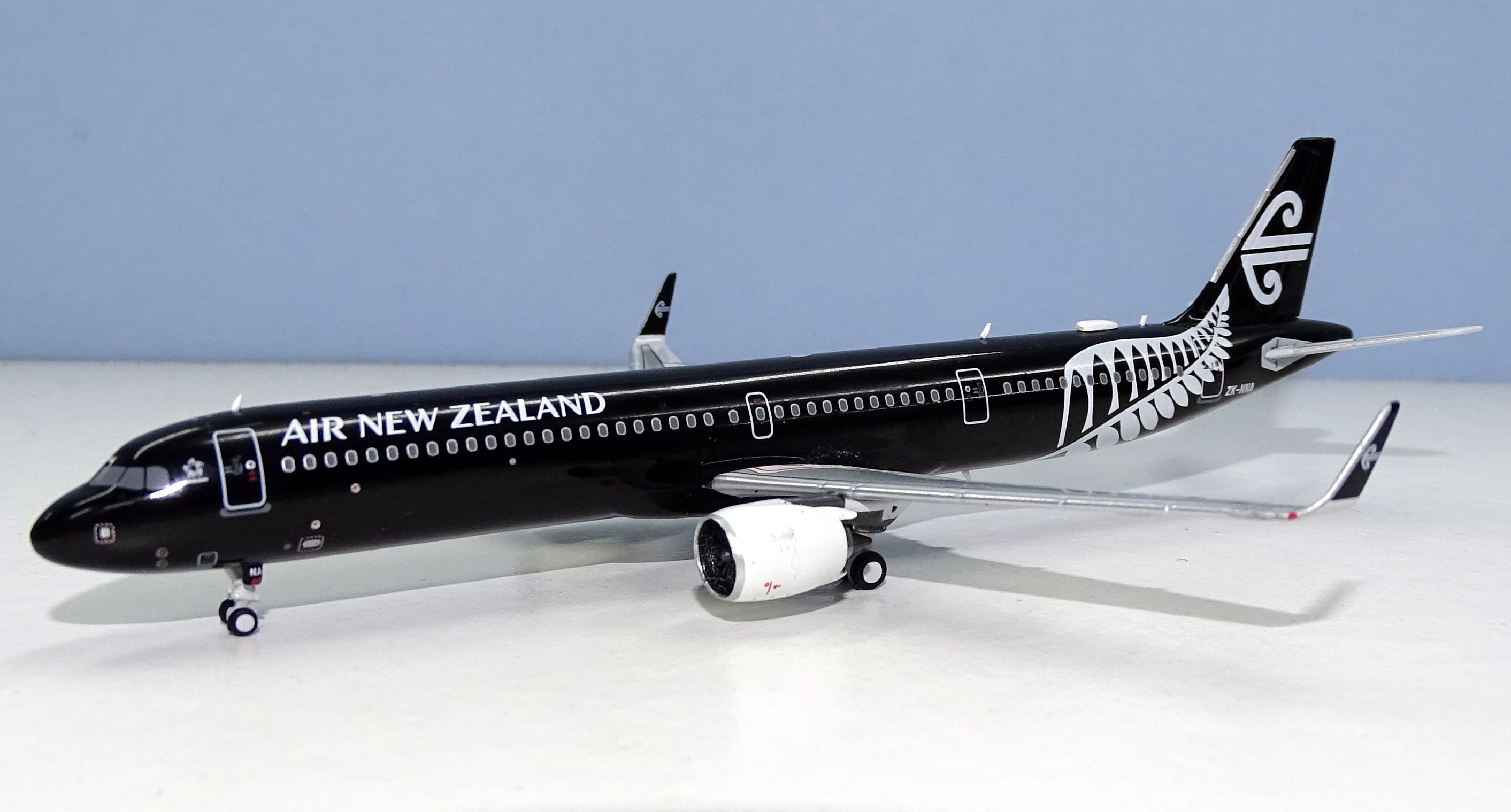 I had been keen to compare the new Panda mould with its closest competitor, the HYJLwings A321, ever since I saw them first announced. The HYJLwings is close to perfection so I guess in theory the Panda should look and feel very similar. In fact, it is very hard to distinguish them from each other. Ignoring any accusations of plagiarism, that isn’t a bad thing obviously since it means the moulds are both excellent.

The shape of the nose is perfect as is the rest of the fuselage. You have to get really into close-up to notice any real differences and they come down to tiny things like the HYJLwings sitting a tiny fraction taller at the nose and having tiny bit taller sharklets. The most obvious distinguishing point between the moulds is the position of the stand hole, which is a lot further forward on the Panda (at the front of the wing line rather than in the middle of the wings).

Of course, as I have pointed out a few times previously when reviewing A321s the type is more than just a stretch A320 since the wing is equipped with double-slotted flaps. Only JC Wings and HYJLwings have got this correct until this Panda mould. The wing is effectively impossible to tell apart from the HYJLwings, which once again is a good thing as it immediately makes this a superior model to the recent Phoenix release in the same livery.

The undercarriage is very nicely done and the forward gear leg has the characteristic slight tilt forward of the real thing. Another difference between this and the HYJLwings is at the maingear where the inside struts are not individually partitioned but have connecting material between them. I have another Panda A321 and it shows this to a lesser degree as well so in fact I think it may be a QA problem and I’ll deal with it in that section.

Considering the size of the LEAP engines ground clearance is pretty decent. The engines themselves are accurate and introduce the final difference between this Panda and the HYJLwings A321. The HYJLwings has see-through engines whereas this model does not. It actually probably looks better for the solid fans as reproducing the correct number of fanblades in a see-through engine at this scale is very difficult.

On the aerials front the model has all the major aerials (3 on the roof and 1 on the rear belly) and is only missing the very small one on the forward belly. All the aerials are well placed and sized. The Wi-Fi dome is also on the model although it may be slightly too small.

Given they are so incredibly similar I think this Panda A321 is tying with the HYJLwings for first place amongst A321s. It is certainly a country mile ahead of the Phoenix A321.

Air New Zealand’s new identity had been delayed for several years, during which aircraft were progressively stripped of their Pacific Waves, but was finally unveiled in June 2013 and featured a new ‘fernmark’ logo in addition to the Koru. For those of us not endeared with Rugby the choice of black as the main colour was vaguely annoying but there is no doubting the livery is eye catching and following on from the All Blacks Rugby scheme several members of the fleet have been painted into a modified Rugby-less all black version of it, including ZK-NNA (both her sisterships wear the standard white and black scheme). 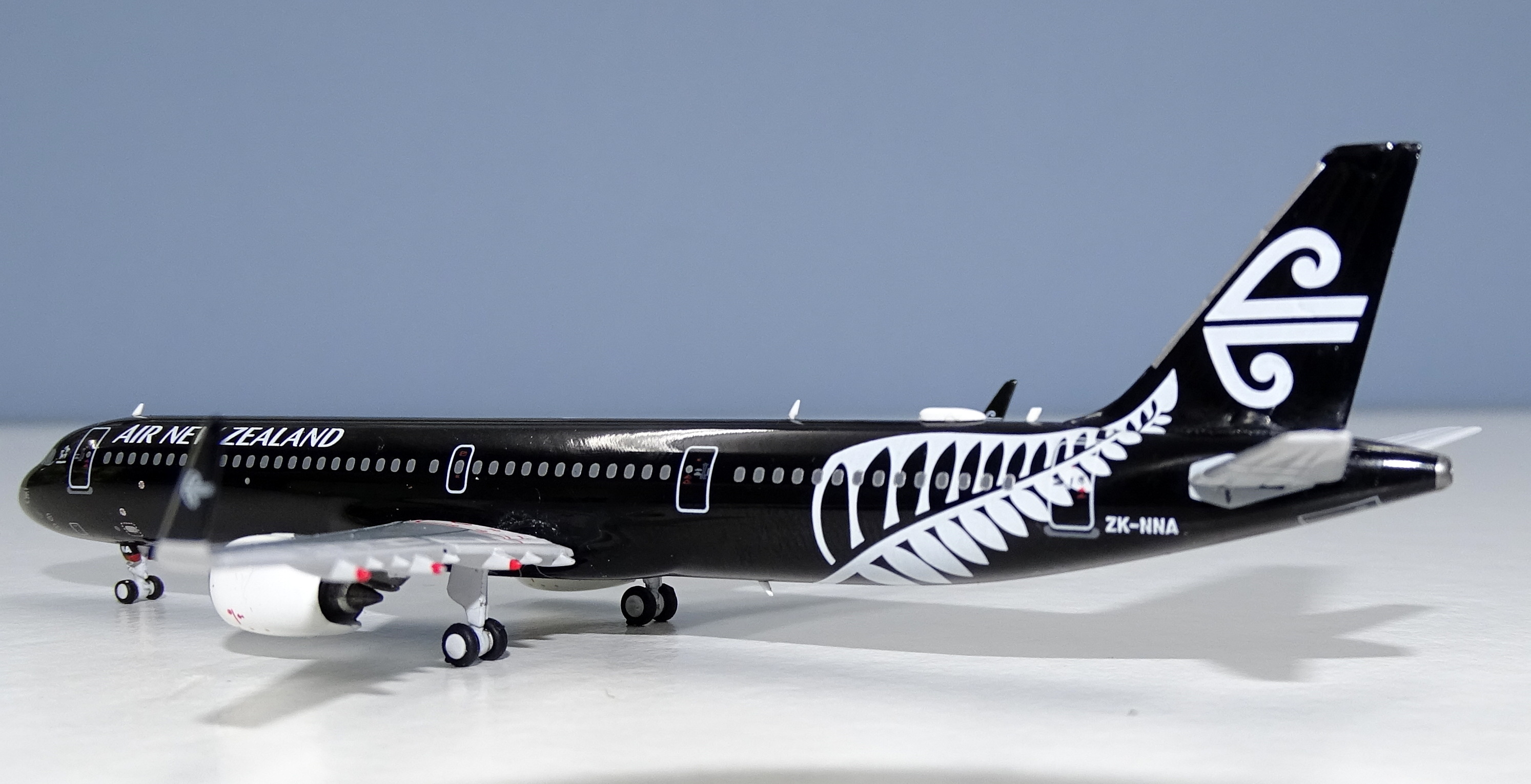 It is hard to make a mess of the colours when they are black and white and Panda does not. The new title font wordmark is easier to get wrong as it is subtly quite complicated. I’ve been looking closely with the magnifying glass and it is about as good as it can get in my opinion. The letter positioning and serifs are present correctly. 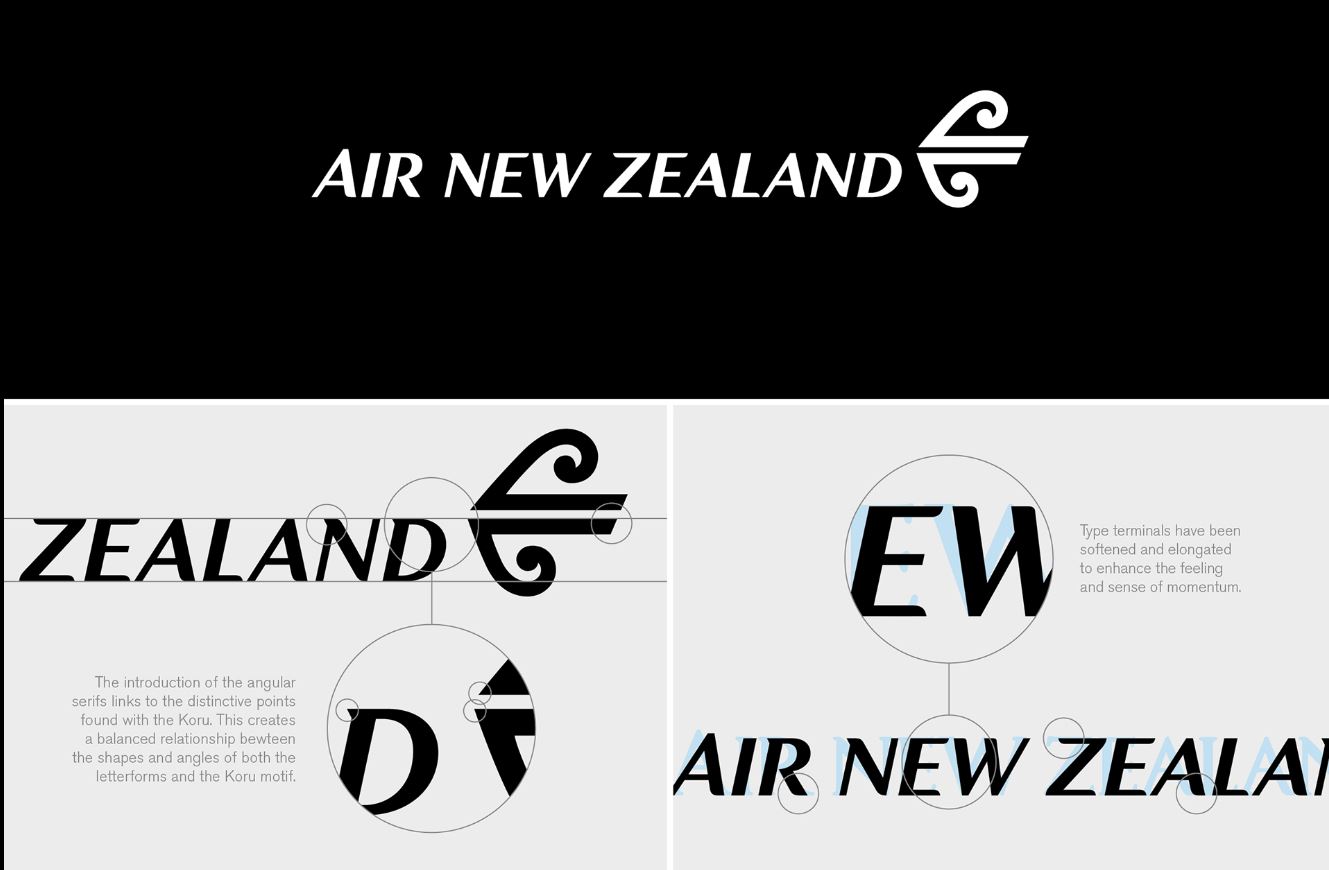 The positioning of the Koru on the tail and the swirling fernmark are excellent and other little details (Koru on winglets, white door outlines, Star Alliance logo) are beautifully placed and printed. Lastly all the aerials and Wi-Fi dome are correctly white, along with the engines. 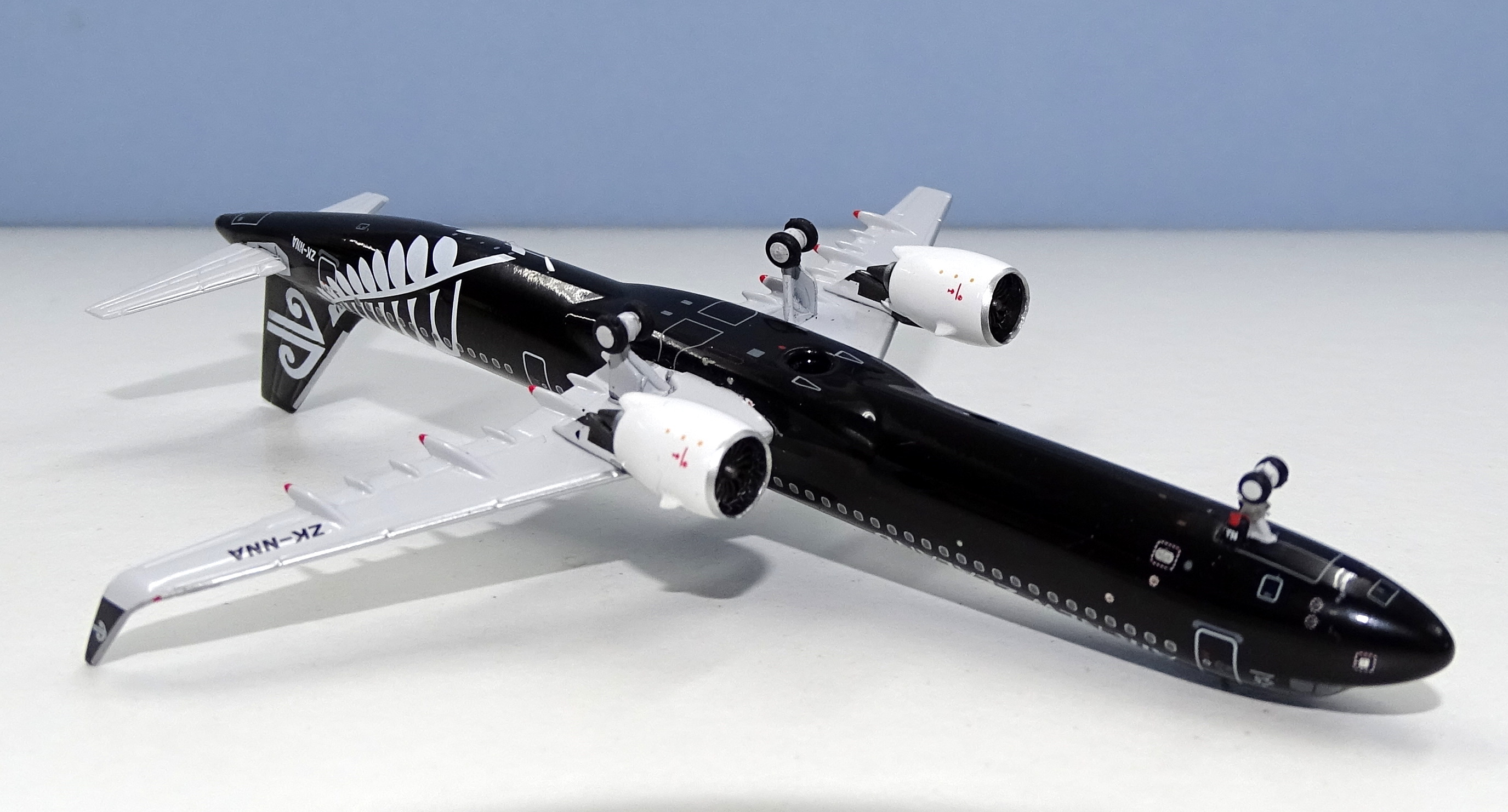 The printing is excellent right across the model. I’d be stretching to say it’d be nice to see some panel lines on the engines. Everywhere else the level of detail is very high. 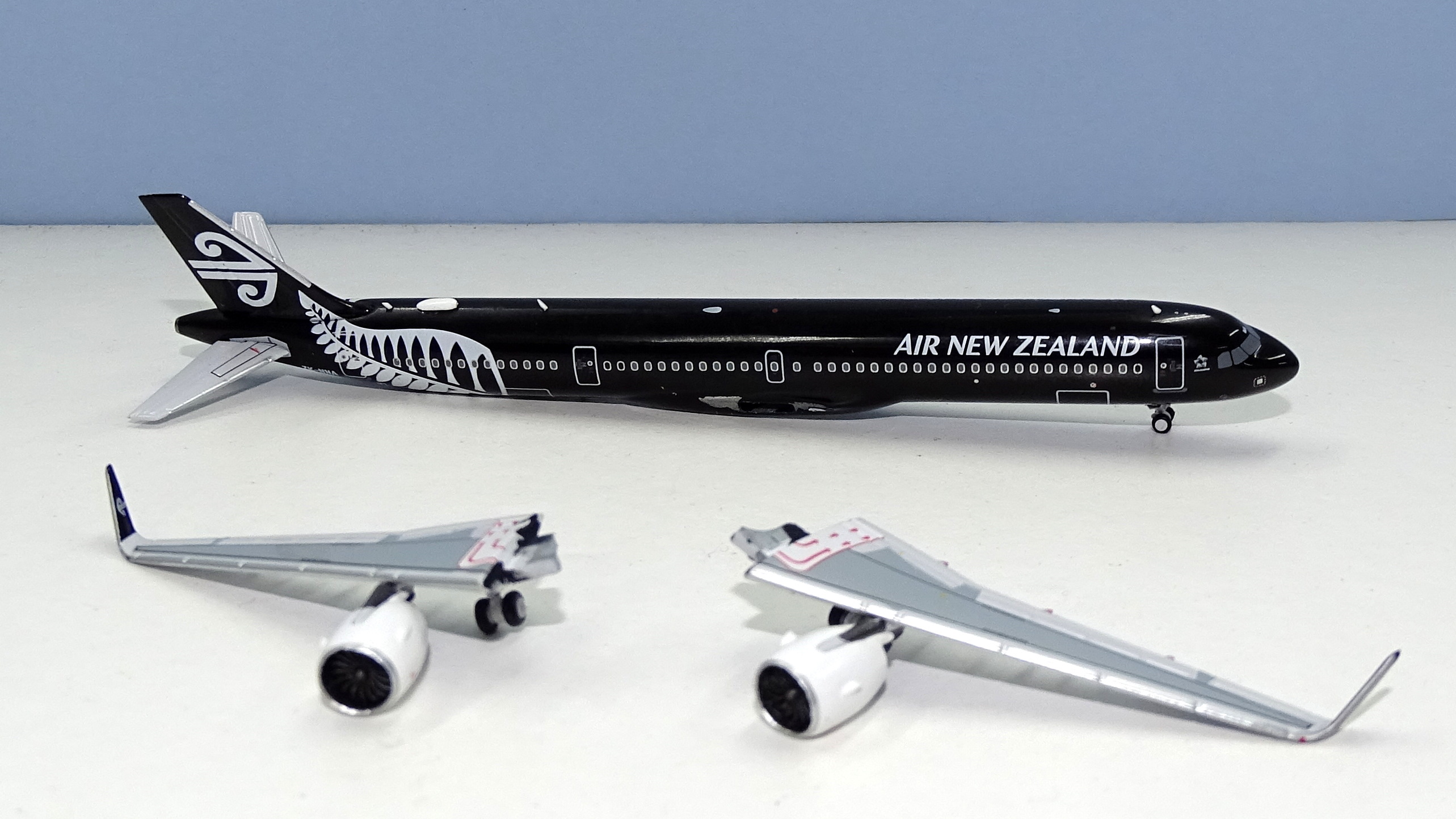 This model arrived in a box from China and it is well known that EMS like to put their parcels to the test, however the model was inside a box within a box and its own box (the third layer) was undamaged. So, I am not especially keen to prescribe the QA failure the model has to postal concussion. The issue was that the model arrived with one wing off and the other just sitting in the hole. Fortunately, the wings have been easily attached and there is no damage to the aircraft. However, it would be nice to have enough glue to keep the wings attached.

I’m also going to knock a point off for the connecting material between the rear gear legs, which I’m convinced is just the filler material that hasn’t been removed.

This Panda A321 displays an excellent mould, exceptional artwork and printing, and looks a million dollars. But that is due to me being able to reattach the wings. I haven’t previously had these kinds of issues with Panda Models so I will assume it is a one off but loose components risk damaging the model, which when it is this good is a crying shame.