The new February 2019 Aeroclassics have just been announced and I’m lucky this month in being able to get a preview of some of them including the USAir 767, which means I can bring you a review without having to wait the usual postage time from California to New Zealand. After a slightly bumpy start Aeroclassics 767 seems to be making its presence felt positively and Aeroclassics are putting the mould through its paces with a series of great subjects. Look out in the near future for more Asian and African examples.

USAir inherited its first international routes and first Boeing 767s from its acquisition of Piedmont Airlines, which was announced in March 1987 but not fully consummated until August 5, 1989 when the pacemaker finally disappeared. Piedmont had been one of the most dynamic and successful of the US deregulation era airlines and USAir itself had been successful also during the early 1980s. So perhaps it was to be a good match up?

Unfortunately, the combination of the two airlines (of which ironically Piedmont was the larger) was initially a disaster with internal conflict between the two sets of employees, huge costs integrating systems and dreadful on time performance added to the negatives effects of a weakening economy, debt from the merger and the wasteful acquisition of Pacific Southwest Airlines as well. During 1989 the combined airline lost $63 million.

Piedmont’s first 767s joined the fleet in May 1987 and six were in service by the time of the merger. One of these was N648US, which arrived in February 1988 as N608P ‘City of Tampa’. Despite its financial problems USAir’s 767s provided it with excellent money-making routes across the Atlantic from its Charlotte, Baltimore and later Pittsburgh and Philadelphia hubs. A further six 767s would be delivered direct to USAir from 1990 as 767-2B7ERs. These allowed further expansion to European destinations like Paris and Frankfurt. When I was a teenager it was common to see multiple USAir 767s parked at the Gatwick Satellite (and later North Terminal).

The 1990s would not be kind to USAir, which dismantled its new Western hubs acquired from PSA, had a chapter 11 filing and a short-lived deal with British Airways, which would acrimoniously end in 1996. Nonetheless the carrier would survive and morph into US Airways in 1997. As Airbus A330s joined the fleet to supplement the 767s both types continued to fly the international network beyond the acquisition of US Airways by American in 2013.

Aeroclassics have been producing not only airline/aircraft combinations for the 767 that are new to 1:400 scale but also replacements for existing models from Dragon Wings, Jet-X and Gemini Jets. This aircraft for example can be seen as a direct replacement for the 2005 Gemini Jets example (N645US), which had a production run of 2000 units (far more than this Aeroclassics release is likely to have got). Given this, and the fact I own the old Gemini version it makes some sense to compare the moulds. 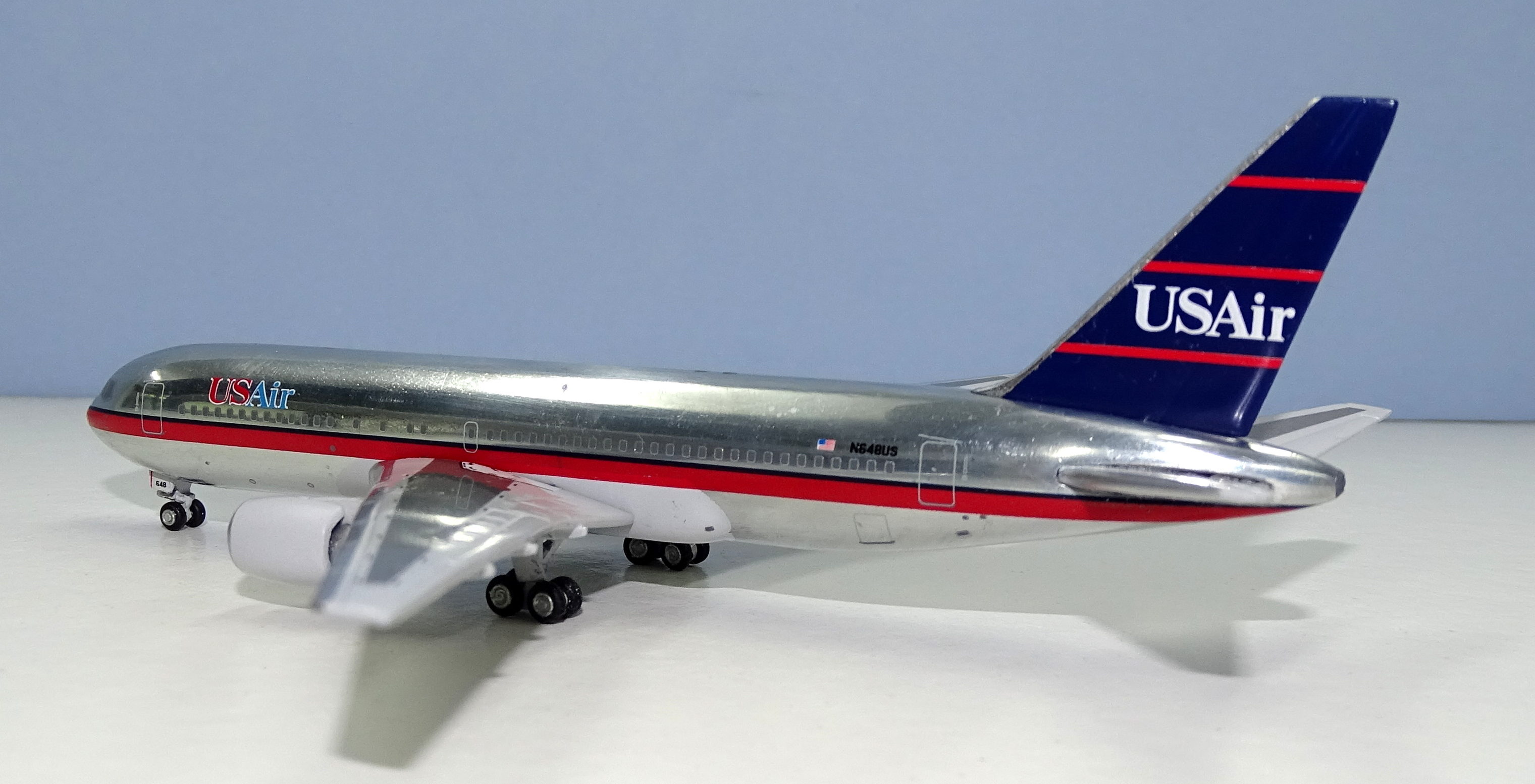 The new Aeroclassics mould’s fuselage shape is excellent, especially at the nose and tailcone. The blunt rounded nose of the 767 is re-created well and I can’t fault the tail region either. To be honest the Gemini Jets mould is also very good in these regions but unlike the new Aeroclassics version the Gemini is a cradle fit mould with a substantial seam line around the wings. The Aeroclassics has a very tight wing/fuselage join.

This being Aeroclassics the most obvious ‘error’ is not an error at all and that is the lack of aerials. All three are missing (one up top and one forward and backward on the underside). I do think they would improve the model but it is not a deal breaker. Nonetheless it is disappointing that in that respect the new mould is not a major improvement on a mould dating from near the turn of the century.

Under the wing the engine pylons do not reach far enough to the rear but otherwise are well shaped and hold the engines correctly higher than the old Gemini. The engines themselves are decent representations of the CF6-80C2B2 at the nacelle but should have a longer exhaust without the cone being visible. 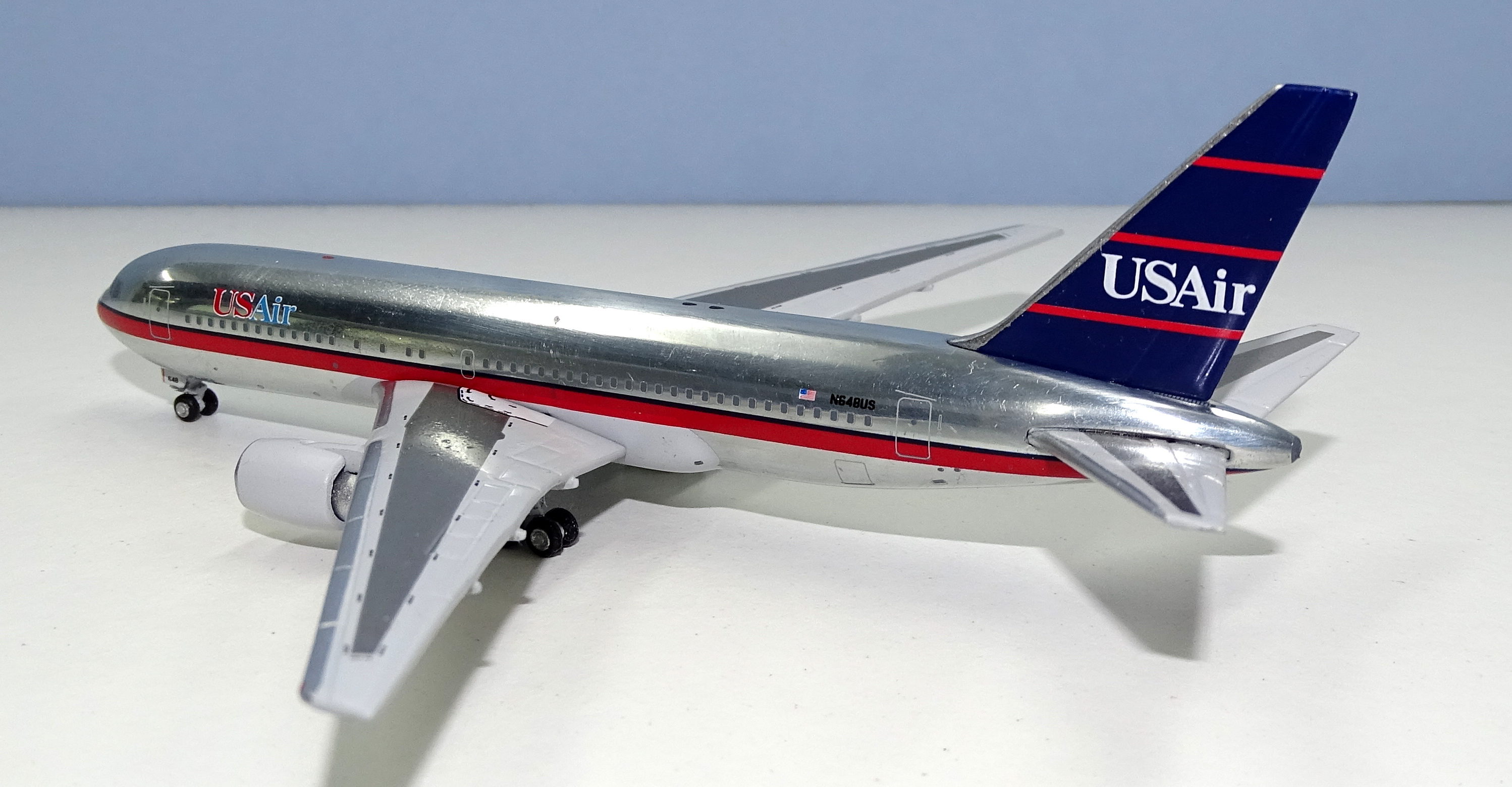 With 14 years between them the biggest difference between this new mould and the old Gemini one is the undercarriage. The original Gemini had static gear with simple tyre hubs, plus the old Gemini mould often didn’t have a nose tyre which quite touched the ground. After many years Aeroclassics has finally recognized it needs better tyre hubs and the 767s have wheels which are not just tyres on a metal rod but have accurate tyre-hubs. It is a major improvement, although the nosegear tyre is now a little too large. The maingear doors aren’t particularly accurately shaped but then again, they also aren’t on the old Gemini.

The Aeroclassics 767-200 shows several areas of superiority over the older Gemini mould especially when it comes to seams, engine pylons and undercarriage. Nonetheless it isn’t faultless. The nosegear is slightly too large, the engines incorrect and it lacks aerials. Even so there is probably just enough to start replacing your old Gemini 767s assuming the rest of the model works out.

The 1990s saw the introduction of a more business-like look to several airline liveries – quite literally in the case of United and USAir. Whereas the former opted for the dull and boring battleship grey scheme at least USAir kept their trademark natural metal and applied a lovely scheme that in my opinion stands the test of time well. The low thick cheatline is red, topped by a much thinner blue one. The fin is dark blue with three red pinstripes across it and USAir titles. 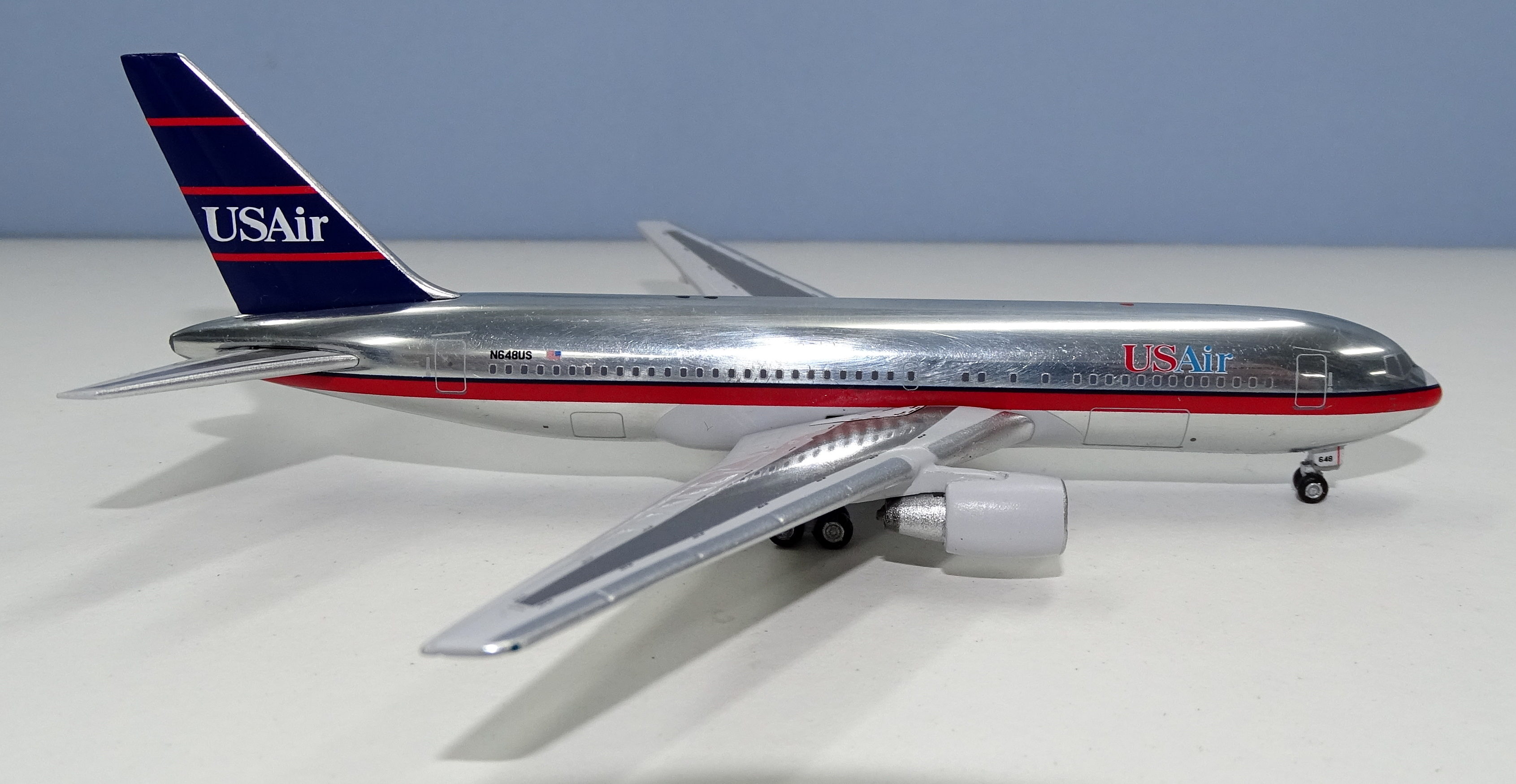 Aeroclassics has struggled to get the pinstripes on the tail accurate of recent with this scheme (my DC-9-30 is particularly bad) but on this model there are no issues. The tail in fact is excellent across the board.

The fuselage is less impressive. The cheatline is slightly too thin and the window printing slightly too low (this is an issue on several of the 767s this month). It is only so by probably a mm but it is noticeable when you compare the window height to the cockpit, the bottom of the overwing emergency exit to the wing itself and the top of the cheat at the rear (which should touch the lower part of the horizontal stabilizer). It doesn’t really damage the model but it isn’t correct.

Likewise, the fuselage titles are a bit sloppy. The USAir should be surrounded by a thin white outline. It is present on the model but isn’t universally applied, almost as if the blue and red has been printed over the white. The S is worst but the top of US and bottom of Air are also poor. It is better on the starboard side than the port.

Lastly although there are photos of the aircraft with the US flag after the registration there are plenty with it ahead so this is not an error.

All the recent 767s share some common printing errors. The passenger entry doors are too short. They should be higher at their upper margin than the cockpit windows and they are not. Additionally, the rear belly cargo doors on the starboard side is not tall enough. Another printing detail missing is the navigation lights near the wing root, something that the Gemini 767 has printed despite its age. Another issue is the overwing escape markings, which have two sets of arrows despite their being only one overwing exit.

Having said all that there has been an improvement in the printing. Maingear undercarriage bay doors are now being printed as standard on the 767s and the tiny no-step markings on the wing are excellent. Another plus over the old Gemini is that the fanblades are dark – perhaps a little too dark actually being black.

Construction wise this model comes well put together. There is a small wiggle at one of the wings but it is attached and not losing points for that.

This is a perfectly decent release, generally well executed by Aeroclassics, but perhaps lacking that little bit of extra detail that would make it stand out. As it is this model is just about worthy of replacing the old Gemini version however it isn’t essential enough that I can say 100% that you have to. Most concerning is that several of the printing issues relate to the template so impact all 767s. Hopefully they can be resolved for upcoming models.

Aeroclassics has been spending much of 2020 filling in gaps in its releases associated with the first two decades of deregulation in the United States. This has meant a heavy dose of DC-9s and 727s, […]

Much maligned in passenger service the MD-11 has more than proven itself as a freight hauler with the majority of the 200 airframes either being delivered as, or converted to, freighters. Unfortunately like its older […]