The Airbus A330 has built up a commanding order backlog amongst the Chinese airlines and its flexibility meant that by 2016 Boeing’s share of the intercontinental Chinese traffic was down to only 30%. Fortunately for Boeing the 787 has enabled them to claw back some of that market share and the type has increasingly been filling out the fleets of the Chinese majors as well as some of the smaller airlines like Juneyao. China Southern are something of a fan of the type and it is a happy coincidence that I recently flew on several of their 787s at roughly the same time as NG Models has released an example of the 787-9 on their new mould.

The march of the big 3 Chinese majors continues on so that now all three are behemoths of global aviation with over 2,000 aircraft between them, ignoring their many large subsidiaries. China Southern is the big cheese in the Pearl River Delta based at Guangzhou Baiyun. Unsurprisingly all three are now also filling their fleets with the next generation of widebody airliners from both Boeing and Airbus, however China Southern is the only one of the three to not operate A350s and instead focus on the Dreamliner.

China Southern was the launch customer in China for the Boeing 787-8 and received ten aircraft, all in a 3 class 228 seat configuration. By 2016 the airline had decided to add twenty of the larger 787-9 as well. Twelve of these were ordered directly from Boeing with the remaining eight acquired through lessors (Aercap and Air Lease). Five were to be delivered in 2018, four in 2019 and the last trio in 2020.

The first aircraft to be delivered arrived on May 3, 2018 and was registered B-1242. In fact, it was this aircraft I just recently flew twice on the AKL-CAN route (a 787-8 transported me on the CAN-LHR segment). Seating on the first five 787s is two-class: 28 Business class and 269 Economy class. Interestingly the next six aircraft have a different seating configuration, three-class: 28 Business, 28 Premium Economy and 220 Economy. The first of these (B-1169) arrived on August 24, 2018. The last five 787-9s will revert back to the two-class layout.

The sheer number of Chinese airlines flying into Auckland nowadays (9 including those from Hong Kong) illustrates how far the Chinese airlines have come and all provide viable alternatives to travelling via the USA for Europe bound passengers, especially due to the newness of the connecting airports. This was my first flight on a Dreamliner and I was pleasantly surprised by the 3-3-3 layout and fit out of the CZ 787s.

The Chinese airport workers may not have quite the same level of friendliness as found when transiting through Singapore, Seoul or Kuala Lumpur however the service and in-flight experience onboard China Southern in economy class is on par with other Asian airlines and they have proven themselves to me a good option for trips back to Europe.

I have already reviewed an NG 787 once, however that was admittedly a sample model and not a production example. I also subsequently investigated all the 787-9 moulds in detail and the results were a little surprising. I have been a big fan of the JC Wings 787 moulds, and they remain some of the best in 1:400 scale, however in a close, points, finish it was the NG Models mould that was triumphant. It is true that the results were so close as to be within the margin of error but anyway you look at it the NG Models mould is very good.

Certainly, it is far ahead of the competing Phoenix 787-9 mould and a country mile ahead of the obsolete Gemini Jets one. Having recently flown on the type and gotten a close look at it I do think I was a little hard on the NG nose area. It is pretty good although I still suspect the JC nosecone is a little better shaped on the underside.

The nosegear is again like the Phoenix mould in that it is slightly taller than the JC Wings. The gear leg is very finely detailed and better shaped than the Phoenix but the rear process is perhaps a little too long. Once again, the gear and leg are very good but I think the JC Wings version is slightly more accurate.

The rest of the fuselage on the NG mould is impressively shaped, especially the underside which has the large structural bar running down its centre in relief plus the various inlets and bumps by the wingroot. The angle of the horizontal stabilisers is somewhere between that of the Phoenix (too low) and JC Wings (higher) and is probably the most accurate of the three. In addition, the NG mould has the best vertical stabilizer shape of all moulds.

There is nothing wrong with the wings, which angle nicely, are finely detailed and turn up ever so slightly at the wingtips. The mould also has very good engine ground clearance partly achieved because the maingear is quite long. From the front the engine fanblades are excellent. The engines are see-through as you’d expect in 2018 but the number and size of the fanblades is better than on the JC Wings and Phoenix moulds. The angle of the engine forward line plus the width of the rims is also correct.

The China Southern 787s have a small Wi-Fi dome just ahead of the wings and it is well shaped and attached. The model also has all four aerials fitted and they are better sized and shaped than the JC Wings ones. What is not moulded in is the tiny hump just after the wings on the roofline but this doesn’t feature on the JC mould either and only the Phoenix has it.

I have previously scored the JC Wings 787 as a 10 and gave this mould a 9, but in several detailed areas (underside, engine fans, tail region) this mould is a little better and now I feel it ought to be on par with the JC effort. NG have also said that they will be improving it in the future. Hopefully they are just minor modifications as this is already an excellent mould.

The livery choices of the big three have been very conservative, constrained by their government ownership, however of the three China Southern’s scheme is easily the best. Even so, the airlines have a wealth of special colours between them and CZ has chosen to paint all its 787s in a special type livery named “Wings of Dreams”. Originally this was to be only for the first 787-8s but it has been rolled out 787-wide and involves a pair of huge Egret wings on each side of the fuselage, which cleverly merge together so one is blue and the other white. 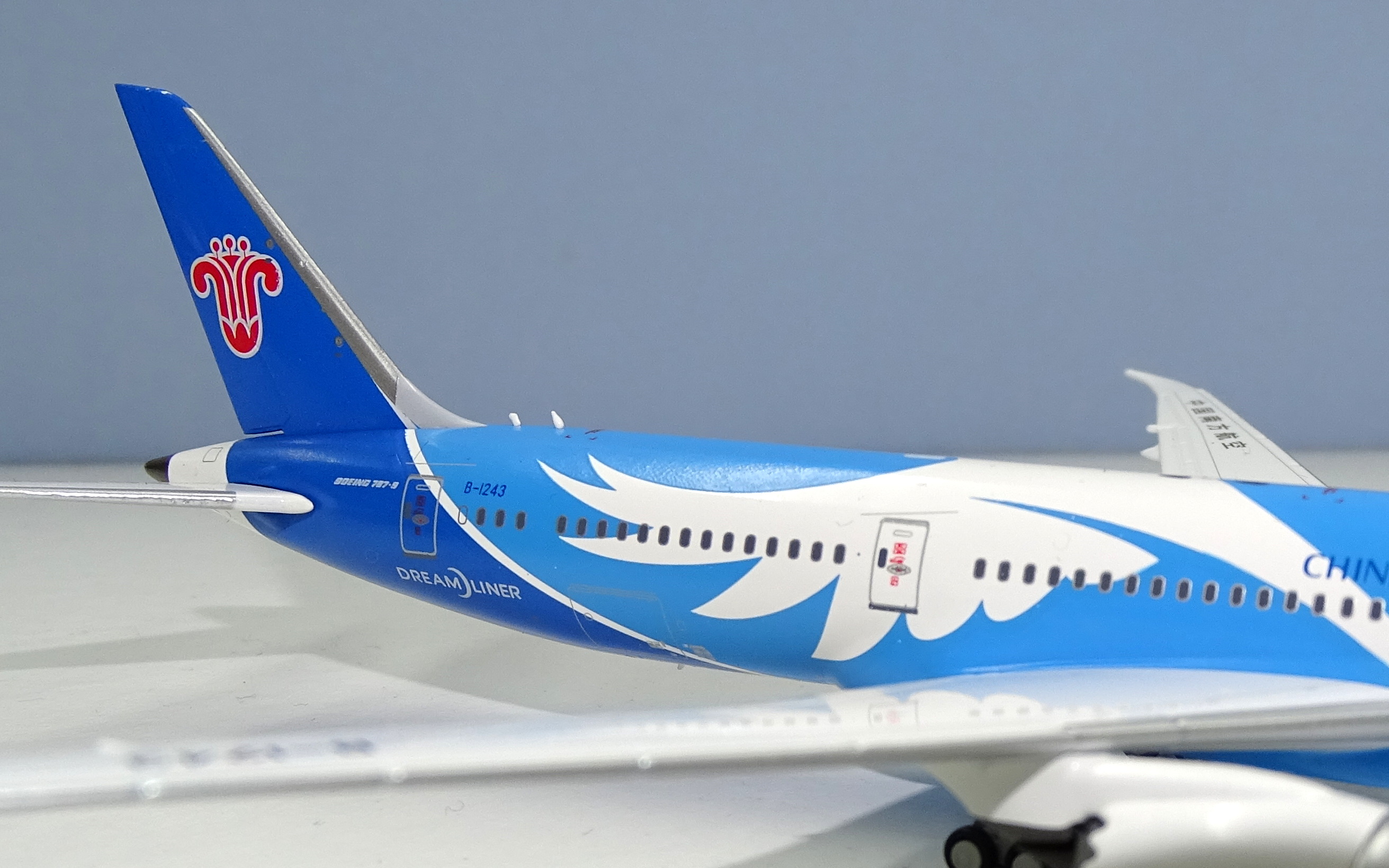 Livery application is one of NG Models strongest areas and there is no skimping on this scheme. The livery feels as though it should be asymmetrical but it is not and the placement of the large wings on the model is accurate seemingly to the mm. All the extra details are present from the Dreamliner logo aft, to the 787 titles, to the reg number on the nosegear. Also present is the Skyteam logo, which will gradually disappear in real life now that China Southern has left the alliance.

The only area of criticism is the colour. I feel that the light blue wings and rear fuselage base colour are a touch too dark judging by the photographs that I am seeing. 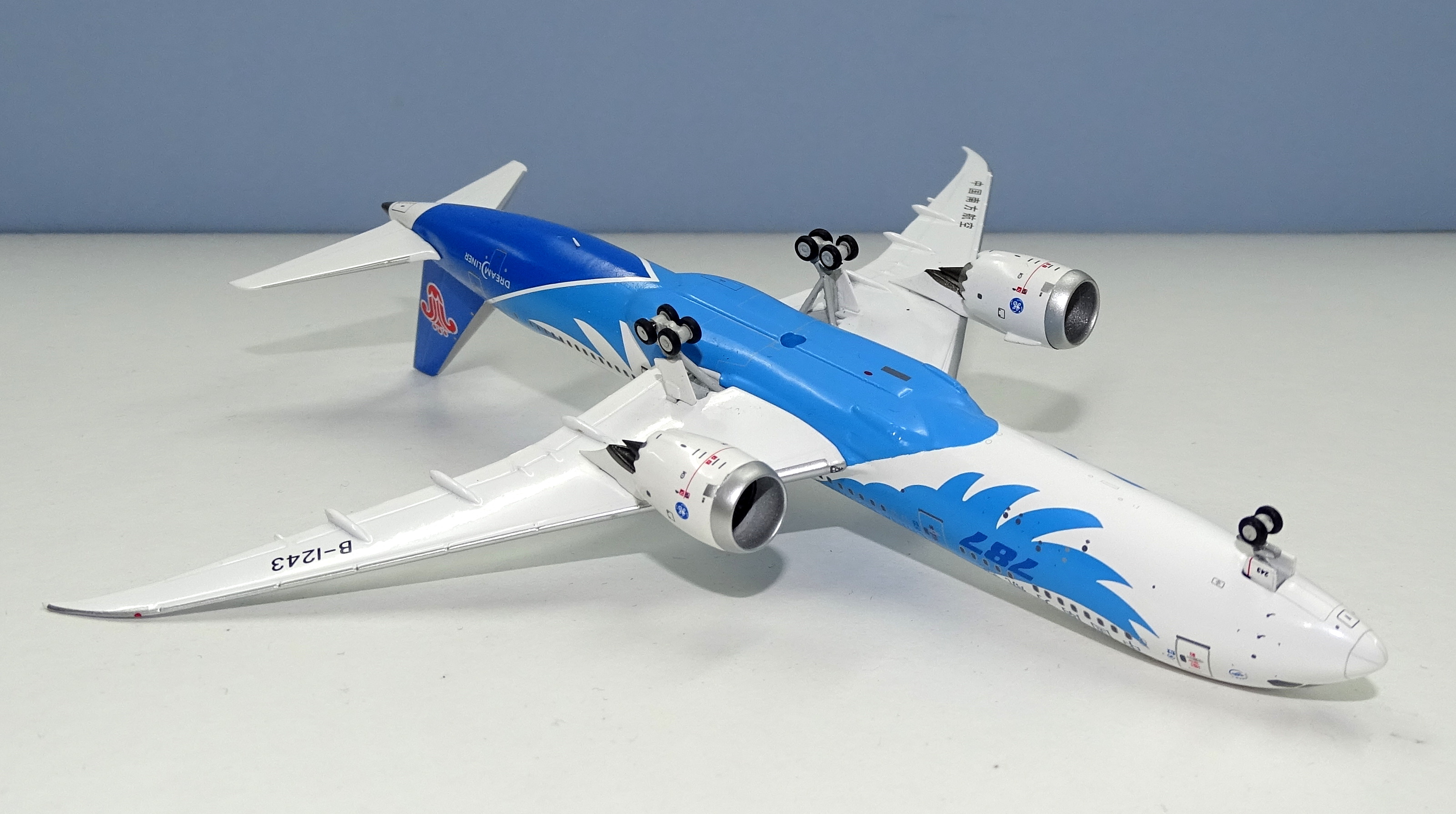 Printing details is another weapon in the NG arsenal and you honestly feel looking at the model that you can read things like the tiny text in the ‘cut here in emergency’ panels. Printing on the doors, nosecone and engine panels also is very finely detailed. I particularly like the clarity of the General Electric logo on the engines.

Quality of the model is topnotch. There are no concerns over the quality of the components or their attachment. If, however I’m being super nitpicky the tyres on this model are not quite as good as on some others I’ve received from NG. The maingear tyres feel a little thin and there is a small tyre tab on one of the nosegear tyres. Should I subtract a point for that? I’m going to if only to show that there is no favouritism towards NG Models.

After initially saying I wasn’t really interested in another 787-9 mould I now own 5 NG Models 787s! This is symbolic of two things; firstly, the high quality of the models they make and secondly the regular tardiness of the releases from JC Wings. As much as I like the JC Wings 787s you simply don’t know when announced models will appear. When there is an alternative that is so good and can deliver within a month of announcement it seems pointless to delay for the JC version. NG are really making headway into the space of the other manufacturers now but it is stimulating everyone to do better. I feel we owe NG a debt of thanks and it is a mark of their current superiority that 28 almost seems like a low score for one of their products.

Unlike the NG 757s HYJLwings’ A321s have caused less of a stir in the market than they probably deserve, possibly because there are just so many A321s being made in 1:400 scale that a few […]