Nowadays the HNA Group appears to be everywhere. It was only formed in 2000 as a holding company for the, at the time, small carrier Hainan Airlines but is now one of the largest companies in the world. Not only does it own 14 Chinese airlines and have stakes in 7 non-Chinese airlines but it also is involved in a big way in real estate, financial services, tourism and logistics. One of its most active arenas is Hong Kong and it has had the clout to make Hong Kong Airlines into a major competitor to Cathay. Hong Kong Airlines has now received 2 of 21 A350-900s on order so it is no surprise that both Phoenix and JC Wings have released examples recently. In this review I examine the Phoenix version.

Hong Kong Airlines has come a long way since operations started, as CR Airways, in 2003 with a CRJ operating charters to the Philippines. Its growth has no doubt proven a thorn in the side of Hong Kong’s main incumbent Cathay Pacific.

By the end of 2005 the CR Airways fleet had expanded with a pair of CRJ-700s but big plans were clearly ahead as a MoU was signed with Boeing for 10 787s and 30 737-800s. Some of these were to come from Hainan Airlines’ order and signalled the growing interest and power of the HNA group. This interest duly came to pass in June 2006 when Hainan tookover and the airline’s name was changed in September to the more illustrious Hong Kong Airlines.

The 787s and 737-800s have not arrived, as the fleet has instead been centred around Airbus Industries products and grown impressively to include 24 A330s, 12 A320s and the pair of new A350s. The first A350-900, B-LGA, was delivered on September 1, 2017 on lease from AerCap. AerCap will supply the first four of the 21 plane order for A350s. Initially the A350s were utilised on regional routes to Bangkok, Shanghai and Taipei to get crews used to them.

The A350s are configured in a three class 334 seat configuration with 33 lie flat business class seats, 108 economy comfort seats and 193 standard economy class seats. The second A350 was delivered on November 20, 2017 and the two aircraft began operations on the new Hong Kong – Los Angeles route, in competition with Cathay Pacific and American Airlines, on December 18.

Interestingly the first pair of A350s were originally destined for Azul of Brasil and actually feature that airline’s internal configuration. From the third airframe the A350s will begin to feature Hong Kong Airlines new business class product with reverse herringbone seating. The arrival of the first Hong Kong Airlines A350 at LAX marked the first time an A350 had landed at the airport, even though Hong Kong Airlines is the 15th customer for the type. Initially flights are four times weekly but they will go daily from January 18, 2018.

As you’d expect as more A350s are delivered they will become commonplace on the airline’s long-haul network to new destinations such as London, New York and San Francisco, which are all part of the carrier’s ‘Flying Beyond’ expansion programme. Hong Kong Airlines certainly seems serious about challenging the status quo in Hong Kong and with the backing of the HNA Group it seems the sky’s the limit.

It is very much a matter of opinion which of the two competing A350 moulds (JC Wings or Phoenix) you prefer. I originally favoured the former but have now come around to the Phoenix version following changes they have made. Even so neither is perfect.

The rest of the fuselage is excellent with the Phoenix mould having the one small dome ahead of the wing and two small domes above the wing in relief. The large satnav dome is nicely moulded as an add-on just forward of the vertical stabiliser. The noticeable crease aft of the wing is also well moulded. When they are well installed Phoenix tend to have better antenna than JC Wings and this model has all 5 that the real thing exhibits (3 on the roof and 2 on the belly).

The undercarriage on this A350 is particularly well reproduced. The gear legs are very detailed and accurate whilst one area Phoenix always does well are the wheelhubs. In the past I have thought Phoenix have employed over-sized tyres on the landing gear but on this model that is not an issue.

Of course on Phoenix A350s it is the engine ground clearance which is the mould’s biggest issue. It has been improved massively over the earliest releases, where the engines actually touched the ground on occasion. The engine pylons are still not correct and the engines are attached too low under the wing leading edge. Still the ground clearance is actually not too bad on this model; certainly it is better than on the Air Caraibes A350 I reviewed back in July.

It really does seem like it depends on the particular Phoenix A350 as to how good the mould rates. The height of the engines above the ground and the look of the landing gear does seem to vary between models. This Hong Kong Airlines example is better than the Air Caraibes and so warrants a better mould score.

Hong Kong Airlines utilises the latest version of the HNA Group standard livery as worn mainly by Hainan Airlines. Indeed increasingly HNA Group airlines appear to be taking on their own identities although even when they do, as with Lucky Air, new aircraft sometimes appear in a version of the standard scheme. It is a very attractive livery especially on the A350 and avoids the mainly white fuselage so common to many of the world’s larger airlines.

The only individual aspects to the Hong Kong version of the scheme are the titles and the Hong Kong Airlines logo itself. The logo represents a stylised version of the bauhinia flower, which is the symbol of Hong Kong and present on the national flag. The HK Airlines version has the HNA group logo as its centre and the petals radiating out symmetrically, quite differently to the petals on the flag itself.

Phoenix typically use lighter colours than either Aeroclassics or JC Wings and in this case they are probably a better fit for the main orangey red colour of the livery. At distance Phoenix appear to have made the livery well but there are a series of detail errors, which are disappointing considering how common this livery is in 1:400 scale. Seeing as they’ve made Hainan and Hong Kong Airlines models so many times before you’d think they could get it 100% correct. They obviously can’t be bothered that much.

We’ll start with the positives. The vertical stabiliser design is not bad although the dark underlining doesn’t look that much like the shadowing on the real thing. The position of the main fuselage sash and titles are also fine, but look a little closer and the errors begin to creep in. Most egregarious is the position of the internal yellow swoosh just forward of the tail. It ought to follow the red outer boundary, only very gradually moving towards it but instead on the model it clearly does not resulting in a curve that is far too strong so as to get it to fit ahead of the tail. This seems worse on the model’s port side (see above).

This isn’t the only error – the silver of the tailcone APU exhaust is not long enough, the white outline of the last passenger door not thick enough, and on the winglets the lower margin of the red paint is straight rather than curving as on the real thing, plus it’s missing the yellow line.

The last error is more obvious. HNA Group airlines usually have the HNA logo behind the cockpit but Hong Kong Airlines for some reason does not. Phoenix haven’t recognised this and printed the logo anyway. It isn’t often that manufacturers add extra details but the designer of this model obviously didn’t look at the real aircraft, or perhaps the model was designed before the aircraft was out of the paintshop?

All in all this is a poor representation of quite a simple livery and given their experience with HNA group airlines Phoenix should be doing better.

Phoenix are almost infamous for printing quality issues whilst the printing itself rarely comes up to the standard that JC Wings or Gemini manage. This model does not have any fingerprints, painted in hairs or other quality fails and the detail is decent, if not fantastic. In some areas the print is rather overdone (like the doors) whilst in others there isn’t a lot of detail (especially the engines and pylons). On the underside there is more detailing than usual however Phoenix don’t follow up some obvious areas that are moulded in (like the gear doors) with any outlining and with the paint rather thickly applied the lines of the gear doors are rather lost. Even so the printing is adequate and the model loses no points here.

Quality control in general is not a Phoenix strongpoint however at first glance this model is very well put together. There is a little bit of tyre-tabbing on the maingear but it wouldn’t be a Phoenix release if there weren’t! The good opinion rather disintegrates however when you pick up the model and the entire starboard wing falls off! 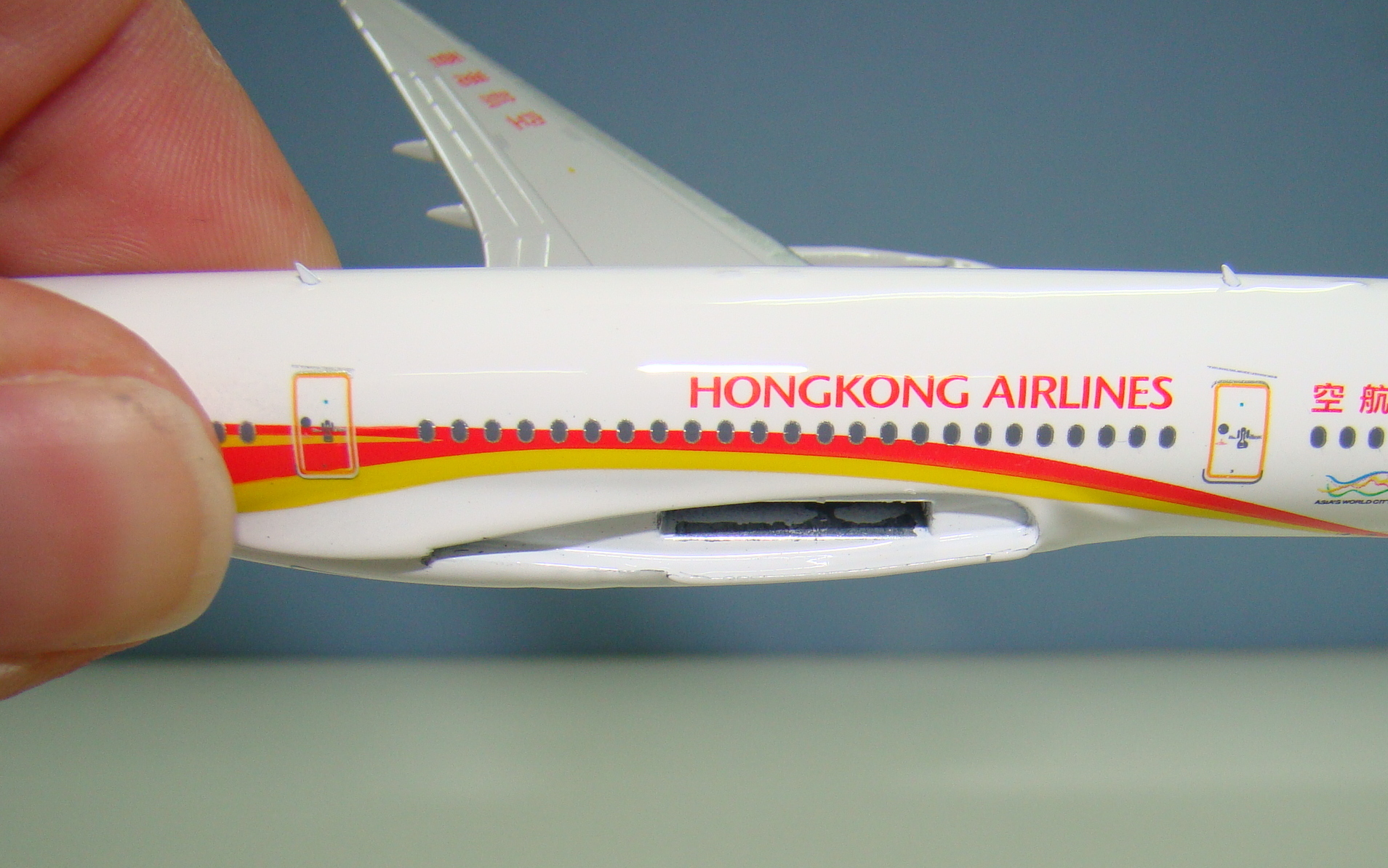 This is not unheard of sadly and I have had models from all the major manufacturers that this has happened on. Usually however the wing has been glued in at one point in time. In this case it is clear that the wing and fuselage join have barely seen a drop of glue in their lives. There is only a tiny mark on the top tab to suggest any glue was ever present. On the plus side at least this means the wing hasn’t damaged the fuselage print when it detached in my hand. As such I can reattach the wing easily enough and there is no harm to the model, but seriously. Is it too much to glue the parts together?

Lastly the port engine exhaust is covered in some kind of white (glue?) residue. This has partly come off with a bit of scratching but should never have been there in the first place.

Phoenix is an expensive 1:400 brand and yet they seem content to put out models that do not befit the price tag. Even when they get one aspect correct you can nearly guarantee that they will cock-up something else. They just seem very lazy both in terms of construction and livery research and application. This model is ordinary and as with pretty much all Phoenix releases it is definitely buyer beware.

Almost every Chinese airline has multiple special liveries of one kind or another in their fleet advertising a wide range of different places and items – cities, theme parks, cartoon characters, events and even chocolate […]

I have a real interest in Chinese aviation and Chinese airliners, partly because they are so well covered in 1:400 scale since all the manufacturers are China based (aside from Gemini). Kunming Airlines are something […]

Hello model collectors, we are excited to announced another contest at The Diecast Flier! It’s time to get those photos of your models ready as we’ll be having a Model Aircraft Photography Contest! To enter, […]