JC Wings has shown a massive improvement in the quality of its models in the past year or so but one area it continues to struggle with is the release of models in a timely fashion. Plenty of announcements are made but few of the models see the light of day within 6 months. So it is that many of 2017’s models remain to be released and in fact 2018 so far has seen few new JC Wings aircraft hit the market. To that end I’ll take a look at one of the releases from the end of last year.

The list of operators that ordered but never took delivery of the McDonnell Douglas MD-11 is lengthy and tells a story of a troubled programme beset by performance issues and symptomatic of incremental improvement over its predecessor, the DC-10, rather than transformative change as provided by the competing A330/340 and 777. Nonetheless the MD-11 was first to market of the new generation widebodies in this size category and stood a decent chance of reasonable sales for this reason alone; In fact being launched as early as December 30, 1986 the MD-11 had 52 orders and 40 options out of the gate.

Some of these orders would end up going to what would become stalwart MD-11 customers like Finnair, KLM, Swissair and FedEx whilst others would be fulfilled for less enthusiastic customers like American Airlines and Korean Air. The first MD-11 took flight on January 10, 1990 and N111MD would be joined by her sistership N211MD in April. Almost ironically both these first aircraft were destined for early customer FedEx and had side cargo doors installed. The MD-11 would go on to prove its worth as a pure freighter of high value, but in 1990 that was hardly the niche market McDonnell Douglas was aiming at. 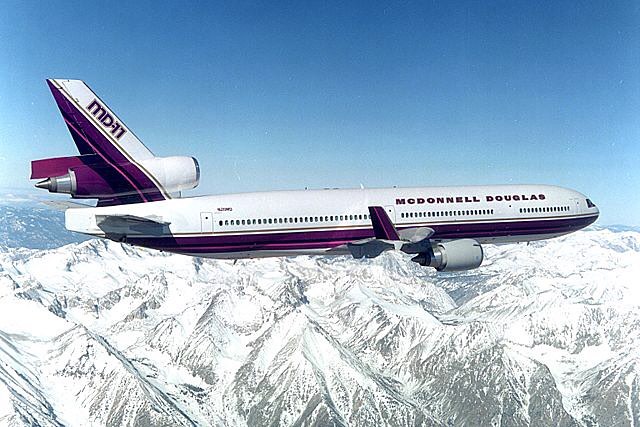 Certification of the MD-11 ran smoothly enough and Finnair became the launch customer on December 7, 1990. Unfortunately it quickly became evident that the MD-11 was not meeting performance promises for both range and fuel burn. Airlines planning on flying long haul trans-Pacific services in particular were not happy. Some like American Airlines voiced their concerns but took the aircraft whilst others like Singapore Airlines simply cancelled their entire 20 aircraft order.

Although MDD worked hard to rectify the issues, with some success, the resulting Performance Improvement Programme took many years and still produced an aircraft inferior to the competition. American sold all its MD-11s to FedEx in 1995 and orders dried up for all but the freighters. 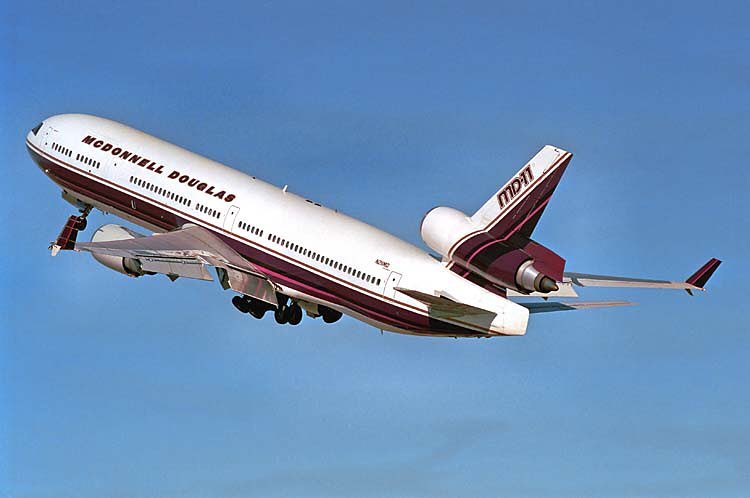 Even so the MD-11 was also bedevilled by bad luck with other customer issues unexpected but ultimately unavoidable. Airlines who had ordered the type such as Air Europe and British Caledonian ceased to exist; JAT Yugoslav Airlines became embroiled in war and Zambia Airways simply couldn’t afford the trijet. Other airlines dropped off the customer list even before the type’s first flight (including SAS, UTA and Dragonair). The two prototypes joined Fed Ex in May and June 1991 with N211MD becoming N602FE. FedEx nowadays still operates more than a quarter of all MD-11s built (59).

With the MD-11 nowadays operated by only a few cargo airlines the chances of any new MD-11 moulds being made are slim, but this is ok since the type has been rather well treated in 1:400 scale and there are several serviceable moulds. In my opinion the JC Wings / Gemini mould, now updated with rolling gears and aerials is the best available.

The fuselage shape is very good with an excellent nose. The mould’s age shows with its cradle wings but the wing seam is small and subtle. Creating a slot in wings mould when you have this one seems rather pointless.

The vertical stabiliser and number two engine are also excellent with the only criticism being that the rear fairing above the no 2 exhaust is in two pieces rather than one (as on the real thing and Phoenix mould). One of the weakpoints of the mould is the shape of the flap fairings under the rear wing, which are a little too rounded. It’s not a major issue.

The modified rolling gear undercarriage is a major improvement over the old static gears. The gear doors are well sized, gear legs well detailed and tyres well sized. Likewise the aerials that have been added are well shaped and sized. All three are present: one just rear of the nosegear, one on the roof above the wings and one on the rear belly. What is missing is the small but noticeable hump on the forward rooftop. To be honest no MD-11 in 1/400 scale has this in relief.

This aircraft is fitted with the early variant of the General Electric CF6 engine and the model here correctly represents the stubbier exhaust cone of the early series rather than the longer cone of the later CF6. As I have noted previously with this mould however the number 2 engine is lacking its fanblades when seen from the front. I’d like to see this rather obvious omission remedied.

Of the first three prototype MD-11s only N211MD gained the full purple McDonnell Douglas house colours. N111MD was all metal whilst N311MD had a white fuselage with full tail. All three versions have incidentally been made by JC Wings. The full house colours are actually rather classic and attractive. A thick multi-toned cheatline runs along under the windowline with a thin gold trip above it. The tail continues the striping although it never meets the fuselage stripes.

The complicated striping is beautifully realised here by JC Wings with excellent colour matching to boot. Particularly nicely done are the thin pink and thin gold stripes; both stand out well and have excellent definition. The only minor point of contention is that the entire fin extension above the no 2 engine exhaust should be purple whereas the model has the lower quarter silver.

The winglets are also correctly marked with the house colours whilst the titling is well placed and sized with an accurate font. This is a well researched livery application down to the small but vital anti-glare panel ahead of the cockpit windows.

Once again JC Wings has done an excellent job on the printing of the model. Small details are all present. The printing is so good that with a magnifying glass you can even pick out the word ‘Experimental’ just aft of the L1 and R1 doors and at the rear doors also. One minor flaw is the bright silver of the engine fanblades – a simple error all too often cropping up with new releases.

This is a solid mould and on this example one that has been perfectly put together. There are no QC issues – not even a solitary tyre tab.

This model actually gets the same score as the last MD-11 I reviewed and three of the lost marks are for the same things. It shows just how solid the MD-11 is in JC Wings hands and is definitely one of their best widebody moulds, much better than their A330, better than the 747 but not quite as good as the new 777. I certainly can recommend making this lovely model part of your collection as a tribute to the flawed but ultimately effective last trijet.

Herpa are a major player in 1/500 scale but not much more than an oddity in 1/400. They release a tiny number of models each year but at least make some interesting subjects. Slowly Bombardier’s […]