A new airline livery must be music to the ears of the 1:400 manufacturers and interestingly the new S7 Airlines scheme on the equally new A320neo has recently proven popular with both Aeroclassics and Gemini Jets. Of course the Gemini neo is a mess of a mould so the only real option is the Aeroclassics. Both of the recent AC Baby Buses reviewed have suffered from poor presentation so can this model make it third time lucky?

S7 Airlines has proven itself a survivor, which is no mean feat in a Russian industry which still had some 300 Babyflots flying about in 2000 and in which the Aeroflot group gets enormous protection from central government. As with hundreds of other carriers it was formed from one of the ex-Aeroflot squadrons following the disintegration of the Soviet Union.

Sibir began flying under its own name in 1992 and did not rebrand as S7 Airlines (S7 is its IATA code) until 2006. It grew organically from its Novosibirsk-Tolmachevo hub in Siberia so that by 2000 it was the 4th biggest domestic passenger airline in Russia. That year it tookover the failing Vnukovo Airlines (itself Russia’s no 3) and in the process gained the all important Moscow hub operation.

Sibir’s growth was staggering – 85% in 2002 and by mid-2010, by then S7, was the largest domestic airline in Russia. Its closest competitor was UT Air but the 2011 creation of a merged Aeroflot grouping dwarfed it. By 2013 S7 only represented 10% of the domestic market – well behind the Aeroflot groups 34% but still joint second with Transaero.

Although seemingly somewhat stunted by the rise of the Aeroflot group S7’s fleet still stood at 58 aircraft in 2014 (it is now 75). By this time the 737 Classics and A310s had given way to an A320 and 737NG narrowbody fleet supplemented by a pair of 767s. Nowadays the fleet is entirely narrowbody and includes 22 A320s. All of these are registered with VP or VQ prefixes to avoid costly import taxes and four are new Pratt & Whitney powered A320-271neos. VQ-BCF was the first delivered new on lease from BOC Aviation on July 20, 2017.

As I have stated previously the Aeroclassics baby buses are hard to beat amongst the big 4, certainly they are ahead of anything made by JC Wings, Gemini Jets or Phoenix. Nobody else has got the shape of the fuselage so accurate. The nose, wing join and tailcone are all faultless.

It took a surprisingly long time for Aeroclassics to modify their A320ceo mould into a neo and they were not in the end first to market. This is fine as the resulting neo is still pretty good, however in several ways it is a missed opportunity. Obviously the model lacks aerials, as Aeroclassics refuses to consider this feature as worthwhile; however the other aspect of concern for the AC A320 also remains unchanged.

This is of course the nosegear. The tiny tyres make the model too low at the front, whilst they are merely rubber rings on spigots with no discernible wheelhubs at all. Considering others (most recently HYJL Wings) can create nice detailed nosegear on their A320 family aircraft there is little excuse for the rudimentary offerings here.

The engines are the only thing in fact that has changed from the earlier A320 and Aeroclassics has actually done a very nice job here. They are well shaped and sized and have decent ground clearance despite the nosegear.

VQ-BCF introduced the new modified S7 scheme upon her delivery. The previous livery was equally gaudy but this new one has updated it with the removal of the dark green belly and business people silhouettes, free’d the S7 from its red roundel and introduced a two-tone main fuselage. I actually quite liked the old scheme but the new one is a tasteful update.

The green colours of the livery remain essentially unchanged however the darker green now covers the entire rear half of the airframe and its vertical stabiliser. The new scheme employs a micaceous enamel paint giving it a pearly lustre. This isn’t really apparent on the model and in fact I’d say the colours used here by Aeroclassics are too dull. They don’t compare well to the verdant greens of the real thing. Interestingly they don’t compare well either to other Aeroclassics S7 releases in the old scheme which essentially share the same colours.

The livery application is also lacklustre. Between the two shades of green on the fuselage is a thin white stripe however on the model the border of the white is beyond the border of the two colours. This is plain wrong as is the lack of white outlining around the doors and emergency exits. Lastly the Russian flag forward of the main doors is too low.

Overall this is a sloppy rendition of the S7 colours and rather disappointing. Annoyingly this is in stark contrast to the recent Gemini Jets releases which nails the livery but is unfortunately on a dog of a mould.

The detail printing on this model is a high quality and a bit more detailed than often with Aeroclassics releases. The engine nacelles are a good example of this. Unfortunately the general high quality printing is let down by some crappy printing on the starboard side of the model. Here the S7 on the tail is not printed level.

In addition even with new engines with massive fanblades on them Aeroclassics still repeats its regular mistake of silver blades not remotely like the colour of the real thing. 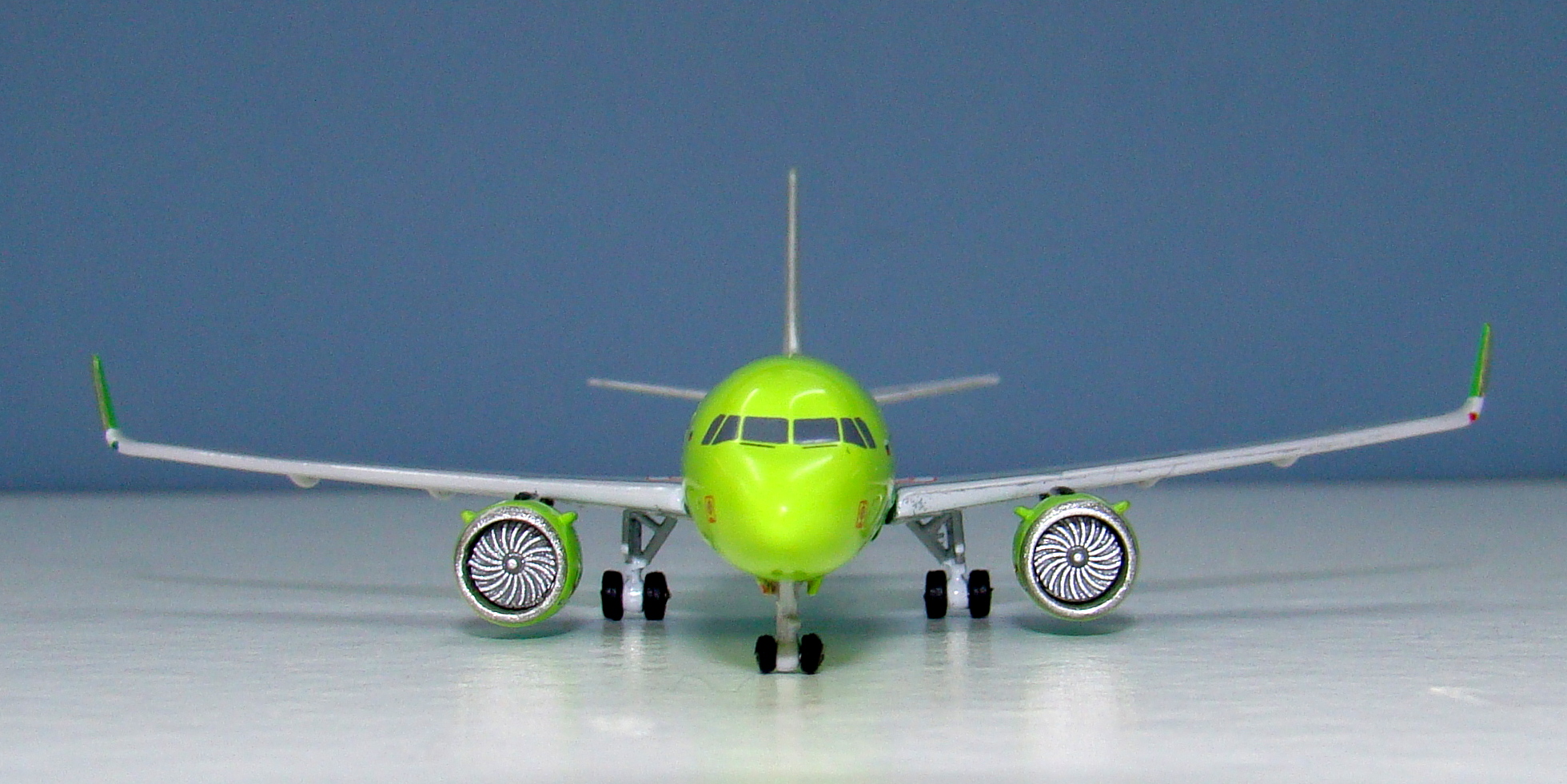 In terms of construction quality things are also not alright either. Often the engines are not well fitted on Aeroclassics A320s, however on that front the model is fine. Instead it is the entire port side wing that is not properly fitted. It has been glued in appallingly badly with the tab clearly visible and clear space between it and the fuselage all along its join edge. Even worse there is a crack in the painting on the underside caused by the poor fitting of the wing. 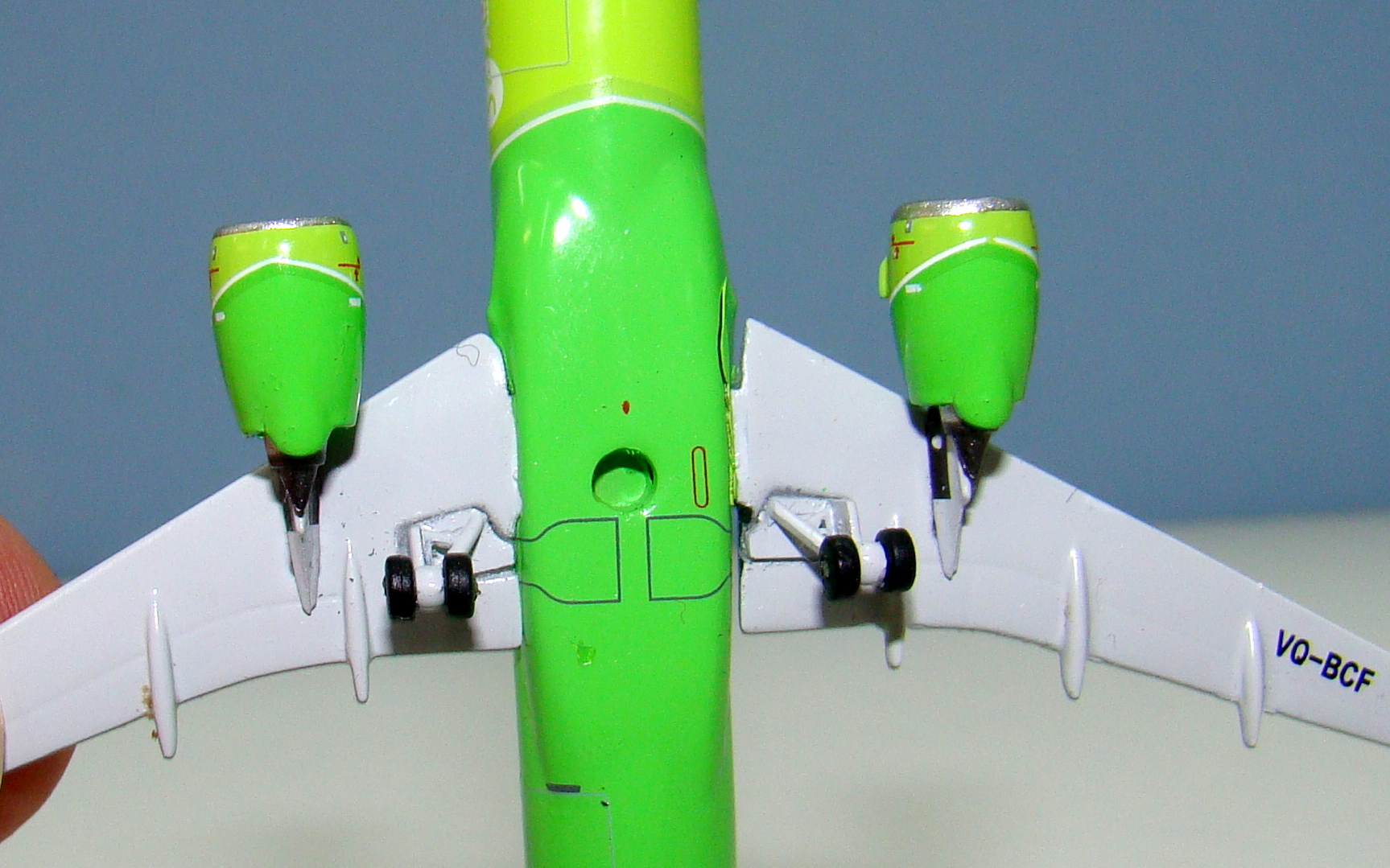 This sort of poor printing and gluing of the model is almost inexcusable and the sort of thing I would have in the past expected of Phoenix not Aeroclassics.

What can I say, this is the worst of the 3 Aeroclassics Baby Buses I’ve reviewed none of which have scored particularly well. This whole model has a lack of care about it. The neo mould upgrade is fine but uninspired, the livery recreation lazy and the build quality awful. I am getting this sort of thing far too often with Aeroclassics models of recent – in fact it has come to be almost expected. Aeroclassics remain my favourite source of models however I am rapidly thinking that I am going to have to get way pickier about which ones I buy.

Despite modifying its sales method and the impact of Covid Aeroclassics has had a very good 2020, at least in terms of the range and quality of releases. Last month I felt compelled to acquire […]

The avalanche of new moulds from NG Models has meant that the new Tristars haven’t had the same attention as the 757s got back when NG only had a few moulds. NG has been parceling […]