The manufacturers appear to be going through the historic and current fleets of the Chinese majors with a finetooth comb looking for potential releases to the extent they are at time straining for obscure nosecones and such. If only they would do the same for non-Chinese airlines but it seems China sells. Anyway this Gemini release was presumably stimulated by Skywings as have several other Gemini / JC Wings Chinese releases, but who can turn down an opportunity to add a Saab to their fleet? 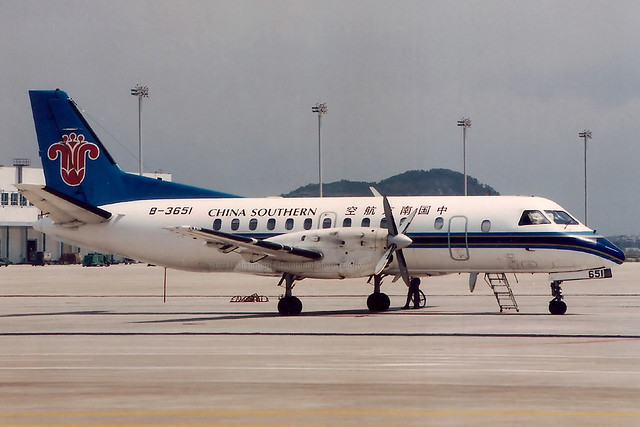 The above image is from Daryl Chapman’s Flickr page

This aircraft dates from the early 1990s, a time when the Chinese majors were just gaining their identities after the breakup of the Civil Aviation Administration of China’s (CAAC) airline division. Rather than today’s big 3 there were in fact 8 component airlines formed although the biggest three were always Air China, China Southern and China Eastern. Even so they are a tiny fraction of the size they are today and aircraft additions were accordingly a lot smaller.

This didn’t stop the Chinese from ordering a few examples of most available aircraft although when it comes to turboprops, and in fact regional aircraft altogether, the Chinese have never shown a huge interest. This is probably partly because the mainstay of a lot of the smaller regional divisions was the Antonov 24 and the Chinese copy of that airframe the Xian Y-7. The Y-7 was license built in China but had had a lengthy gestation. A Chinese built AN-24T had first been flown in 1970 but Y-7 production didn’t kick off until 1977 and service entry wasn’t until 1984.

So the Y-7 was hopelessly outdated by the time China began to open up to the West further and even so it was quite large (well over 50 seats) and so there was a clear need for smaller prop types. Mostly these were bought for China Southern. In 1989 they took delivery of 5 Britten Norman Islanders for passenger and small package operations from the southern city of Zhuhai. It already had 3 of CAAC’s Shorts 360s in operation, initially from Shanghai but later from Wuhan, and added to these by purchasing 4 Saab 340s in December 1991 for operation from Shenzhen.

As with China Eastern’s Fokker 100s further orders were not forthcoming and talks in 1993 for up to twenty Saab 2000s came to nothing. The Saab 340s only had short careers with China Southern and all 4 were transferred to Shandong Airlines in 1997. Shandong was only a small airline at the time and acquired 4 extra Saabs secondhand from Formosa Airlines. They remained in service until 2003/2004. That ended the operation of Saabs in China.

B-3651 served a lease to Nepal’s Yeti Airlines and was then sold to Norse Air Charter where she puzzlingly wore ZS-PDP. In 2015 she was exported to Canada and as C-FJVW she serves with Transwest Air.

The Saab 340 is about as small as you can get in 1:400 scale being quite a bit smaller than a DC-3 and smaller even than the Shorts 360. Nonetheless small size often demands even greater accuracy as problems are magnified, excuse the pun, by having to look a lot more closely at the model anyway.

This is not an issue with the Saab mould, which in my opinion is right up there with JC Wings other excellent regional airline moulds for the ATR and Shorts. The fuselage is great with the strongly sloping pointed nose picture perfect. The rear is likewise spot on with the twinned ventral fins and large vertical stabiliser looking great. Two things that are missing are the quite large antenna above and other antenna below the fuselage. This is compensated for partly however by the impressive underside ridge lines running from nosegear to wing. 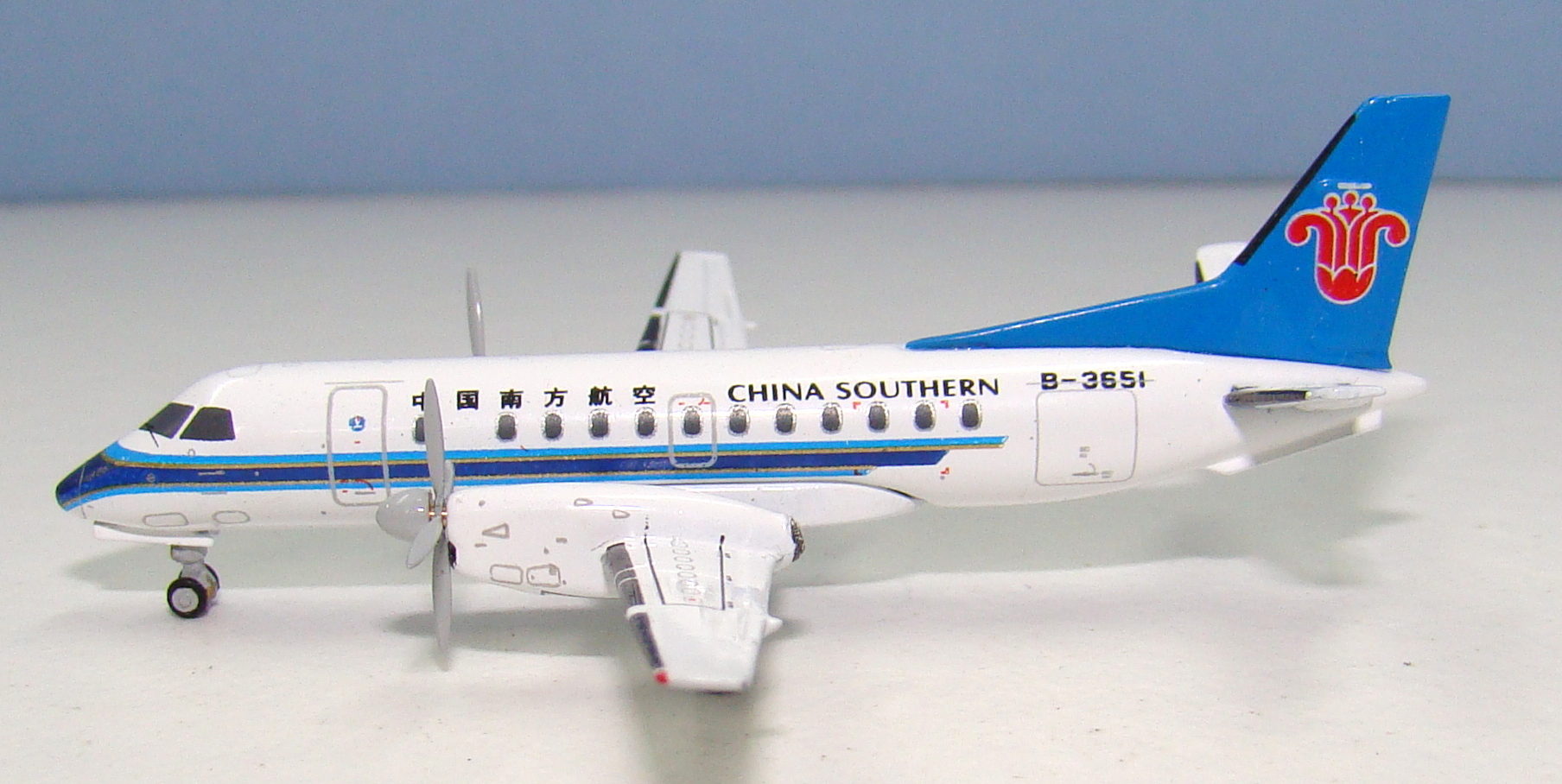 Undercarriage is always a potential risk area with small moulds and the Saab doesn’t have the luxury of short gear like the ATR. Pleasingly the gear here is appropriately sized whilst still being sturdy. The undercarriage doors on the maingear may be a little too long but it is negligible.

The engines and wings are both of a high standard. The mould does have a seam line where the wings join the fuselage, which is longer than it might be, however choosing to follow the fuselage contours as they have makes sense. Lastly the prop blades are thin and nicely angled but the prop spinners are marginally too rounded and not pointy enough. For me the few points I’ve called out are all not worth worrying about however I guess combined it probably knocks a point off.

It appears that photographs of China Southern Saabs are hard to find and in fact Google and the usual photo sites could only find two images – one of which was wearing a pre-delivery Swedish registration. Nonetheless the application of the China Southern scheme was standard and it is a very commonly undertaken livery nowadays in 1:400 scale. Once again China Southern has been unable to modify its livery since it was formed, however of the big three it was easily provided with the most modern of the liveries and even today I think it works well. In fact the Saab wears it particularly well.

Firstly the colours are excellent – rich deep blues and reds with the thin gold trim between the cheatlines clearly visible. The position of all the livery elements is also excellent, all the more impressive considering the tiny size of the model.

The only thing missing is the number 651, which ought to be present on the nosegear doors.

I have a Northwest Airlink Saab which has major issues with its nosegear and it really lets down the model. At this size any QC inaccuracy is magnified by the model size. There is little to worry about here however as the printing on this model is awesome. The detailed printing on the engines is exceptional and shows what can be achieved. I hope Aeroclassics is paying attention here. Printing detail on the fuselage likewise shows door detailing well. It is real nitpicking to point out that the prop-blades lack the half black leading edge. They are at least the correct light grey colour. 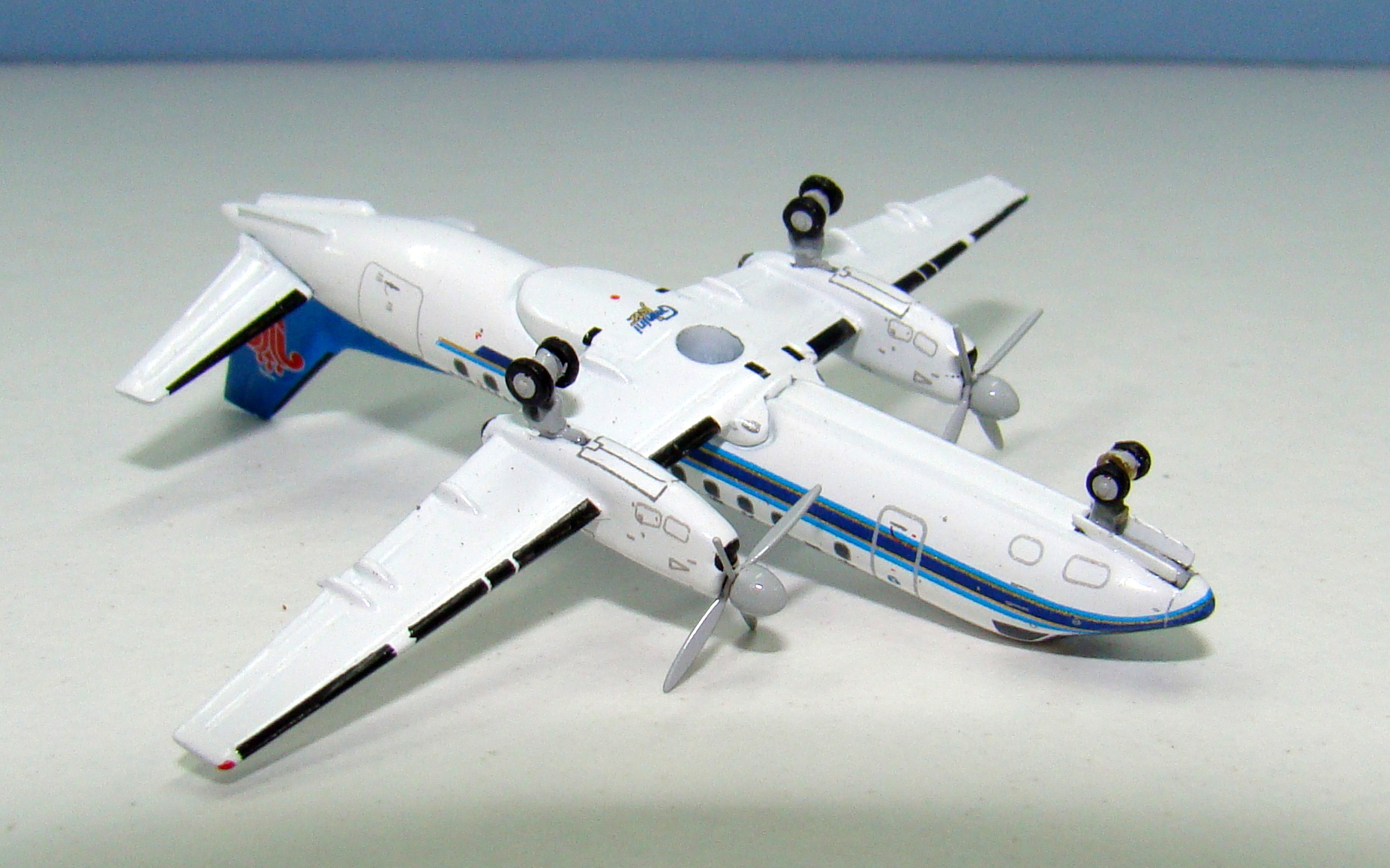 The overall QC is also faultless. Construction quality on this tiny model puts many larger Gemini releases to shame.

I suspect that the sales potential for such small 1:400 scale models is low however that hasn’t stopped the production of a superlative deserving mould and model. It adds up to the 2nd highest score I’ve ever given a Gemini Jets model. There is plenty of scope for further Saabs although I assume not at the production figures Gemini require. That is a shame as the Saab mould deserves a lot more usage.

In this week’s Airport Spotlight we take a look at one of the most well-crafted, and detailed 1:200 scale collector airports as we venture to Pat Michael’s custom designed 1:200 scale airfield.

Propliners are awesome. Their models may not sell like 787s but they are a window into a more civilized time in aviation. Only Aeroclassics nowadays makes classic piston-props, which is a damn shame. At least […]

The A330neo has taken the place of the smaller A350-800 as the competitor to the 787 at the lower end of the market, which is somewhat ironic considering the original A350 was just a warmed […]