Cathay Pacific has in recent years gotten seriously draconian on anyone producing models of aircraft from airlines in its group, even to the extent of sending legal notice to model database sites advertising the models exist. This is a shame as the manufacturer they seem to favour (Hogan) doesn’t do much in 1:400 scale and what it does do is decidedly ordinary. It is just as well that despite Cathay’s attempts plenty of CX models still get to the market using the tried and testing method of simply leaving the box and model unbranded. Of course, it is usually obvious who made the models – but can it be proven? Let’s hope not!

Cathay Pacific in recent decades has built its long-haul growth around the super successful Boeing 777-300ER and is only now moving onto the latest generation of aircraft for its next phase. The triple 7s took over from the 747-400 as the mainstay of the fleet and the rival A340-600 never really got a look in once the 300ER began to prove its effectiveness.

Seventy-four 777s have been operated by Cathay and aside from 9 series 267s and 12 367s they have all been ER variants, of which all 53 remain in service with the last arriving in September 2015. Quite a few members of the Cathay fleet have worn special schemes which often are reapplied to aircraft down the years. B-KPF is a 2008 build aircraft delivered on January 30th in the special ‘Asia’s World City’ livery and was not the first fleet member to wear the scheme.

She took it over from a Boeing 747-400, B-HOY, which was rolled out in it on July 4, 2002. The livery was created to celebrate the 5th anniversary of the Hong Kong Special Administrative Region (i.e. the autonomous territory the Chinese were forced to setup when they took over the British colony). The original aircraft took 26 days to paint in the complex scheme featuring a beautiful green body with wavy streaming lines down its sides and the ‘flying dragon’ logo with the ‘Asia’s world city’ tagline.

Apparently “From afar, the dragon, which symbolises the spirit of Hong Kong and its people, is seen soaring over the green waves, which depicts the lands and oceans of the world.”. B-HOY was retired in March 2013 after 22 years of service and interestingly B-KPF only continued to wear the scheme until April 2014. This was more than a year prior to the unveiling of the airline’s new scheme but the late repaint into the old colours means that B-KPF continued to wear the old Brushwing scheme into the middle of 2018.

A JC Wings 777-300ER won model of the year in 2017 so it is clear that I hold this mould in high esteem. For years JC Wings 777s had been second best to Phoenix but now the are easily the best.

The fuselage shape is perfection, with an excellent all over shape that in some areas surpasses that of the Phoenix mould. One of these areas is the tailcone. The 777 has an unusual asymmetric tailcone with the APU exhaust on the port side. The tailcone itself is square but not completely flat ended like on the Phoenix mould. The JC wings APU is mould as a separate piece allowing better definition in this area.

Most of the major aerials are represented on the mould and are nicely to scale. The only one I can see missing is the very small ventral one towards the rear doors. The landing gear is intricately made and accurate, aside from the JC Wings standard light grey gearlegs and wheelhubs. On the underside the maingear bay doors are not just printed but also indented as part of the mould. This compares favourably to the Phoenix 777, which has no detailing on the underside at all. 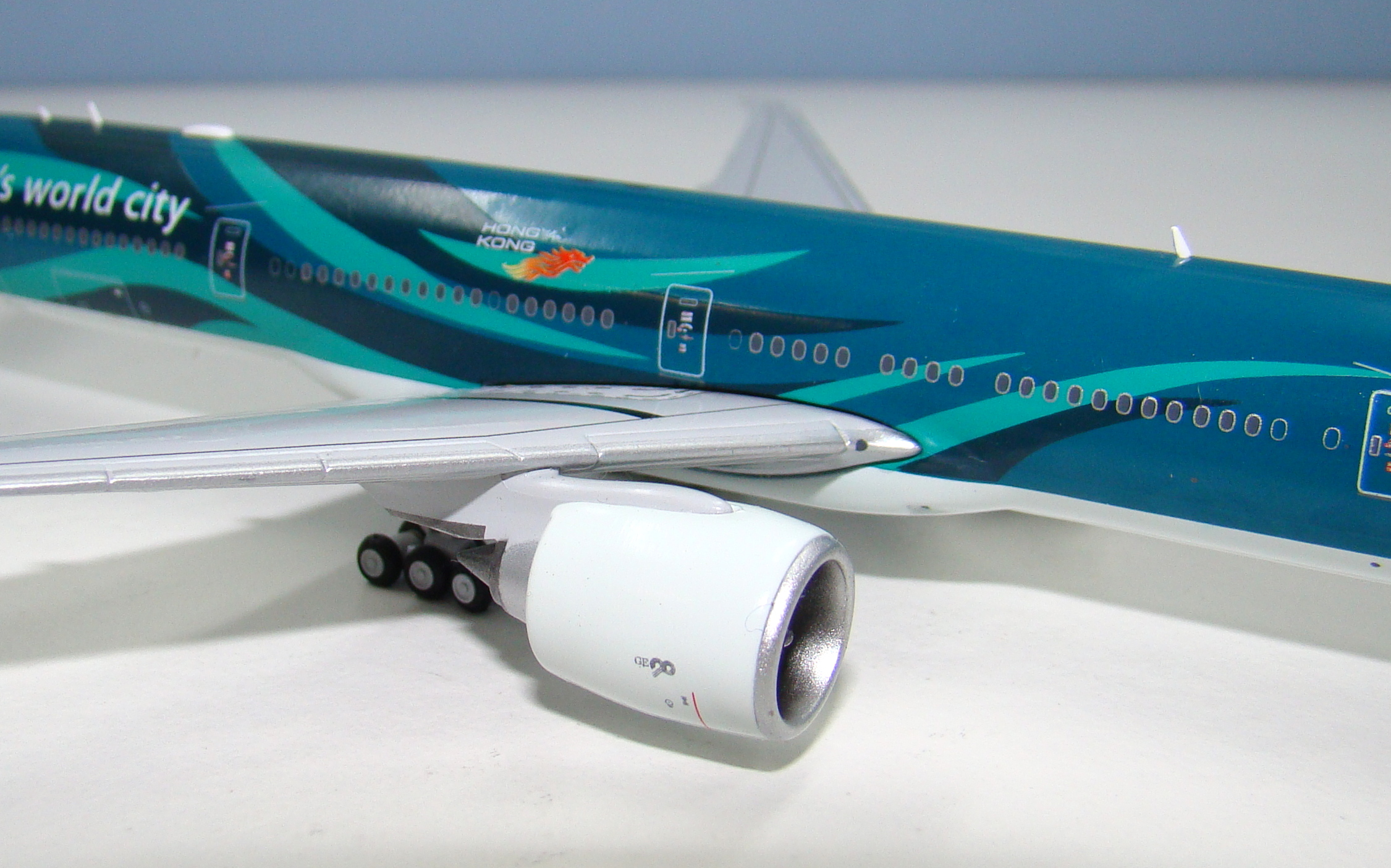 One area of criticism on the Phoenix mould has been the size of the engines and their pylons, which have been thought too small for some. That is not an issue with the new JC Wings mould. The GE90-115Bs are excellently shaped and sized and fit on very good pylons providing plenty of ground clearance. The engines have separate fanblades allowing you to see through them (unlike the solid fan cores of the Phoenix) and JC Wings hasn’t bothered with the pointless spinning fanblades fad.

My only other possible fault with the mould is the attachment point of the wings to the fuselage. The fit isn’t as tight as on the Phoenix mould and there is a gap, although with this dark livery it is hard to see. This mould has swiftly become one of my favourites in 1:400 scale. It is a shame that few 777s fit my collection criteria. Regardless it is the acme of 777 design and I don’t really see how it can be improved upon in this scale in a meaningful way.

The ‘Asia’s World City’ scheme is one to truly put the manufacturer and modern printing to the test. Get a small detail wrong and it will likely throw something else off and lead to a meltdown that impacts the whole scheme. The three green shades that are used on the fuselage are also quite distinct but close to each other while the wave elements overlap each other and text.

Fortunately, JC Wings are usually masterful at printing and overall their interpretation of the livery is very good. I’m sure they can print a standard Cathay Pacific tail in their sleep given the practice they’ve had so there is nothing to report on the vertical stabilizer.

The major wave elements are well positioned but I admit to feeling they aren’t long and pointy enough at their tips. It is not a major gripe but looking at photos I do think they should all be slightly longer, even the small one that finishes just ahead of the word Asia. Fortunately the main body of the waves is very good.

Printing of the text elements, titles, dragon emblem and Swire logo are all fine. The last point of comment is the colours. The two darker greens are both fine but I do admit to feeling that the lighter green is perhaps not light enough. Then again, the photos I’m using for comparison to seem to show the scheme rather faded and in bright light. I am more than satisfied with the livery application here despite my nitpicking. 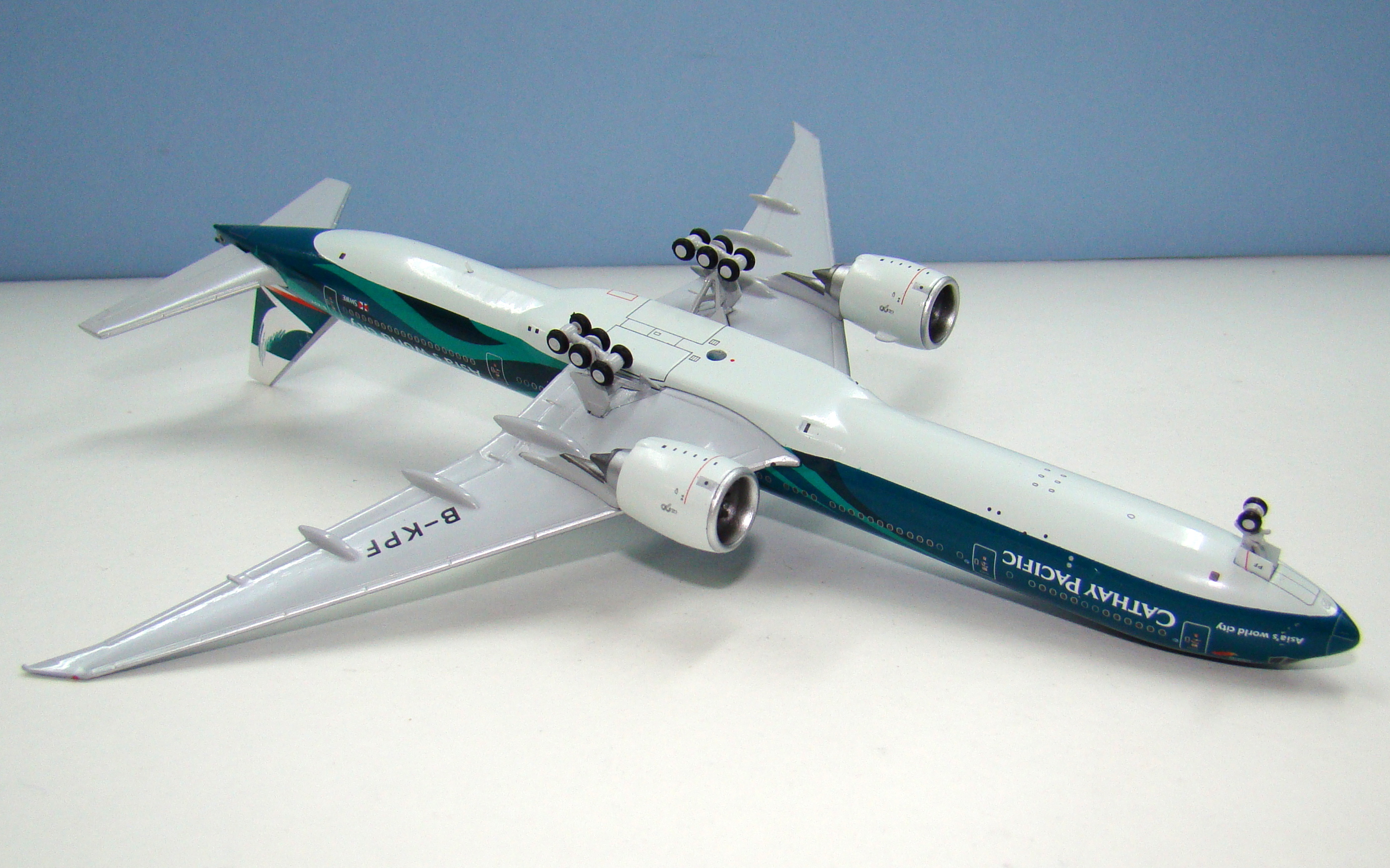 I really like JC Wings printing and on this model there are printed elements that are hard to see even in photos, such as lines above the doors and circles on the forward edge of the vertical stabilizer. All over the model the printing is well applied and very detailed down even to the tiny GE90 logos on the engines.

Construction quality has also risen markedly at JC Wings and this model is perfectly made. No tyre tabs, all the gear legs fit well and the major components are beautifully attached. Plus this model comes with a collectors card, perhaps to make up for the rather non-standard orange box – no doubt designed to throw Cathay’s lawyers off the scent and convince them it is really made by BBOX as the sales code suggests. 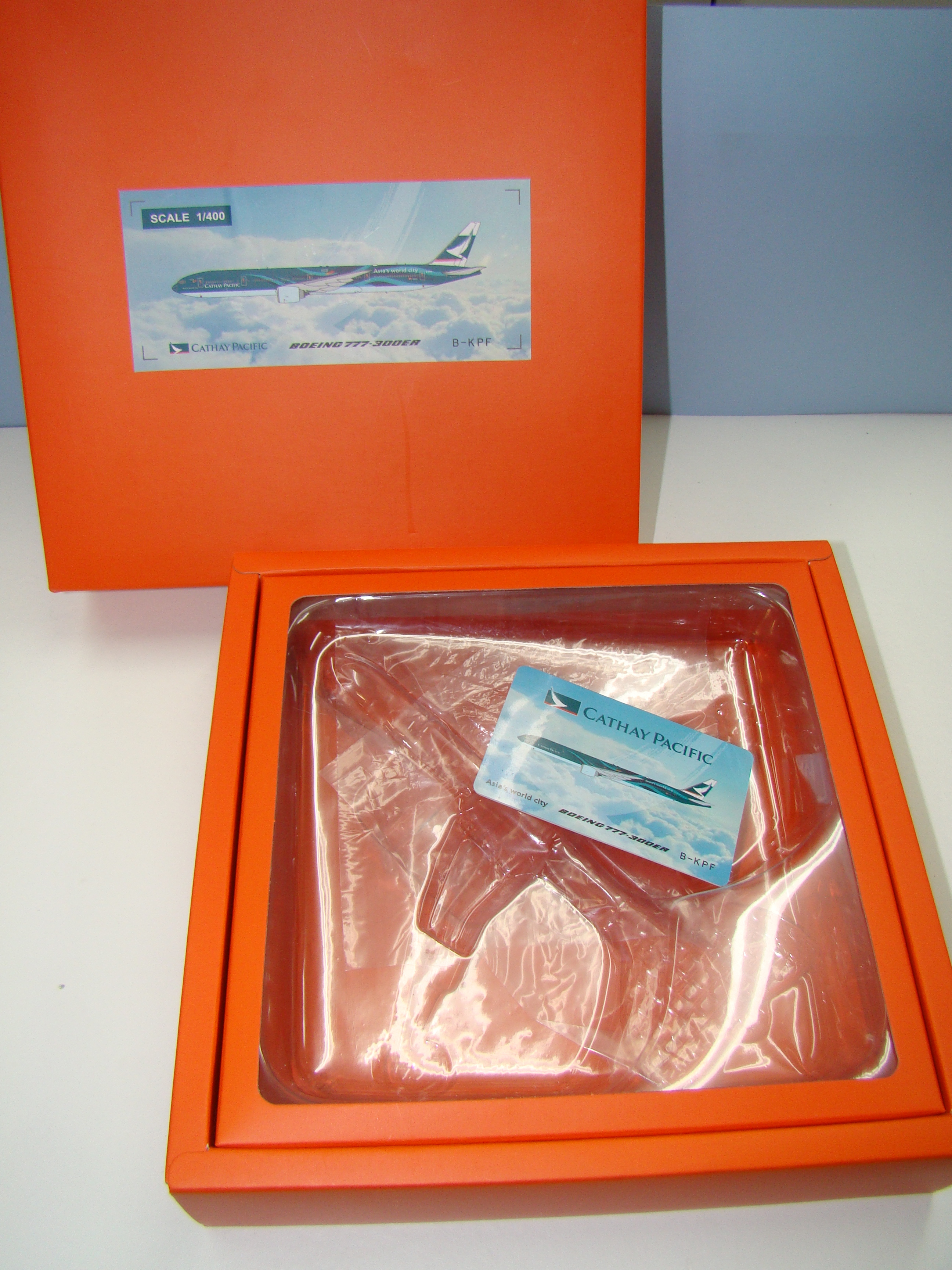 When models are made as well as this it is worth re-releasing previously made aircraft / livery combinations, plus of course Cathay models tend to sell well anyway. It is a superb model and like the last JC 77W I reviewed will be in the short list for model of the year once again.

Only last month I reviewed a Republic Convair 580 and said how excellent it was that the airlines of Northwest’s heritage were getting some belated attention. The announcement of 5 DC-9s and a 727-200 from […]