The C919 represents the first in a potential series of airliners made by the Chinese state owned aircraft manufacturer COMAC with the 9 standing for ‘forever’ and the 19 referring to its 190 seat capacity. Whether the creation of a generational style naming convention for its aircraft is merely hubris remains to be seen but I don’t doubt China will make an impression in aircraft manufacturing. With all the diecast manufacturing itself in China it is no surprise that new moulds for even obscure Chinese types are popping up.

The ambition of China’s aviation industry to become a major player on the world scene is impressive, however until now it has not been backed up by a lot of success. Nonetheless despite the mis-step of the ARJ21 programme the larger and more modern C919 and announced Chinese-Russian partnership widebody CR929 look as though they have more potential.

The COMAC C919 is China’s next step towards challenging Airbus and Boeing, at least for orders within the Chinese domestic market if not really seriously for orders outside of China. As COMAC themselves say:

“We will work hard to become, from a follower, to be a competitor, and in the future, if we have the opportunity, to become a leader. But it’s a long road.”

It has until now been easy to scoff at the presumption and overly optimistic proclamations of the Chinese press, but given China’s progress in other industries, and within civil aviation as a whole, it would be a massive mistake to write off COMAC and its current projects. It remains to be seen whether the C919’s certification runs smoothly. There was a 5 month delay between the type’s first (on May 5, 2017) and second flight (on September 28, 2017), which brought back memories of the ARJ21s tortuous gestation, however since then a second airframe has joined the test programme and testing has picked up pace.

In November the type undertook its first long distance flight, between Shanghai and Xi’an – a distance of over 800 miles traversed in 2 hours and 23 minutes. COMAC said this marked the movement into the research and development phase of flight-testing, and promisingly certification with the European aviation safety regulator began in April also. Full Chinese certification is scheduled to take three to four years with initial deliveries to launch customer China Eastern in 2021.

The order book for the C919 looks impressively healthy with 785 orders although as with the ARJ21 the majority of these are with leasing companies. So far the big 3 have only 15 aircraft on firm order between them and this is very much a tentative response from the actual airlines even considering the level of state intervention. It is highly unlikely that the C919 will be able to truly compete against the A320 or 737 families but Chinese pride all but guarantees a significant production run as long as the sort of issues that have bedevilled the ARJ21 can be overcome.

This new mould has first appeared for use under the Skywings brand but a subsequent blank model was made and advertised as being by NG Models, the obscure manufacturer of a new 757 mould. As I have been informed NG are actually directly related to Skywings and are not connected to Panda Models as has been hypothesized by some. In fact it seems Skywings may have had a falling out with Panda considering the lack of new Panda releases at their shop in recent months.

There are only so many ways you can make a twin engine airline look different and the C919 not only isn’t much of a looker but also looks impressively bland. To my eye the blunt nosecone is especially unappealing but taken as a whole the aircraft looks businesslike. The mould itself looks very good. The fuselage is one piece and almost totally accurate. A nitpicker may cite the tailcone as being a tiny fraction too long and the angle down from the cockpit not quite curved enough. In fact if anything the mould’s nosecone isn’t blunt enough. Even so these are such small issues I’d question whether they are worth even mentioning.

Something that definitely is inaccurate is the size of the nosegear doors, which are definitely too small. The landing gear is good with my only criticism being the solid wheelhubs. The aerials (3 on top and one underneath forward) are all present and well sized. 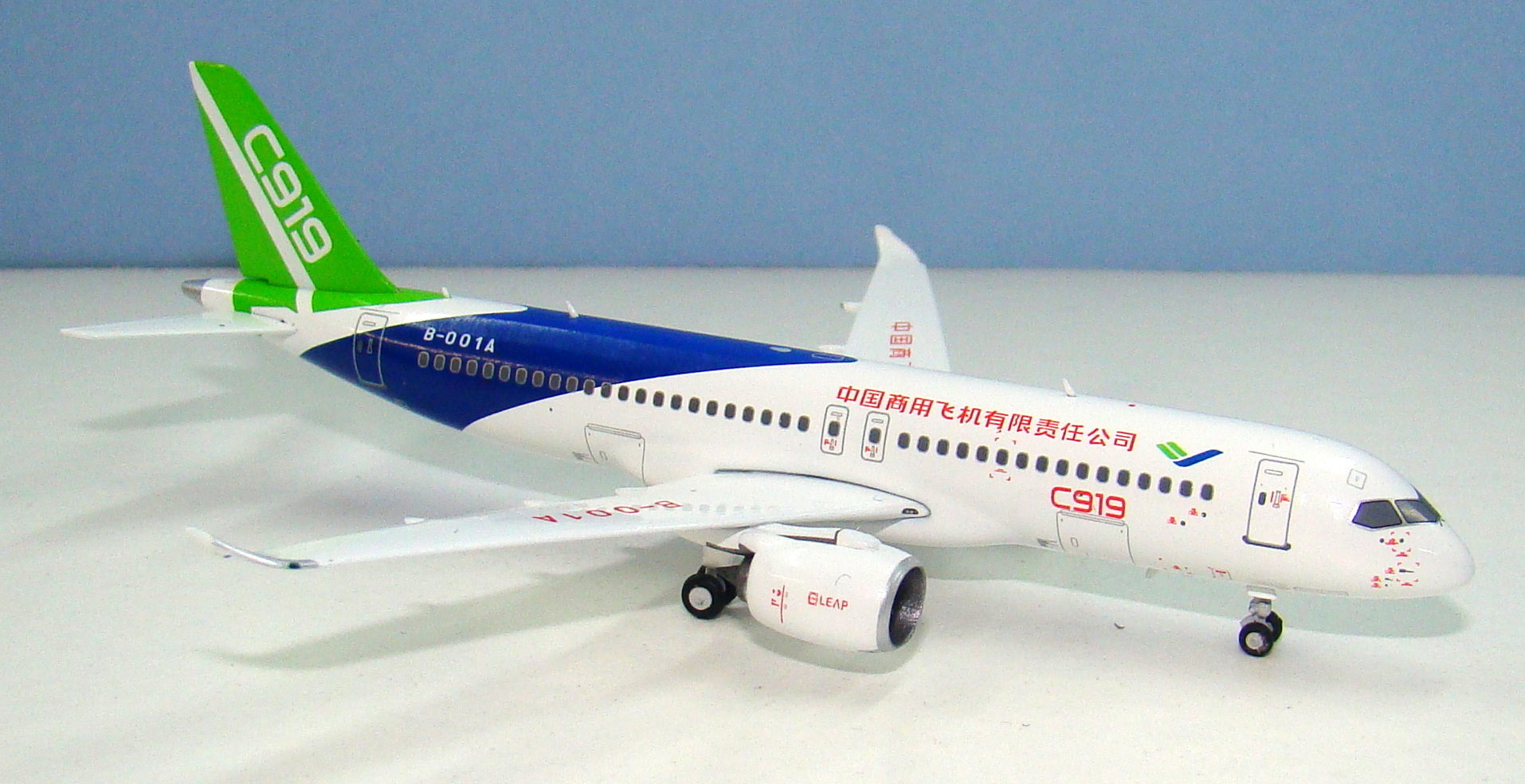 The wings are excellent as are the engines, which not only are well off the ground but excellently shaped and detailed. One unusual way the engines are kept high is the shape of the engine pylons which actually bulge upwards near the fan end ahead of the wing. It’s a little hard to see in photos but from what I can tell this is accurate.

I have really struggled to find inaccuracies with this mould and really I’ve failed. Nothing warrants a loss of points here; this is a photo accurate moulding.

COMAC has for this aircraft adopted what I assume will become its standard house colours, unlike the various schemes worn by the ARJ-21, which had previously been AVIC’s product. The scheme near the tail rather mirrors the shape of the COMAC swoosh logo and the scheme is relatively simple but fresh and easy on the eye.

The colours as reproduced here are excellent. The green is a bright light green and the blue a dark purplish blue. I can’t fault the placement of the livery elements too. The COMAC logo is ahead of the complicated Chinese character titles, beautifully printed, and the C919 is both shown forward and on the tail with the correct font.

The little livery details are also present and correct – LEAP titles on the engines, tiny COMAC logo on the underside of the winglets and registration placement and font.

This may be a simple livery to reproduce but it has been done perfectly and I can’t ask for more.

The printing quality on this model is very high and often exceptionally detailed. Especially around the nose, behind the no 1 door and on the engine nacelles the thinness of printing is a testament to quality. Then again there are a few places where perhaps more printing would be useful. There is no printed nosecone for example and the fairing that joins the wing to the fuselage is not outlined (it clearly is on the real thing).

Likewise the rudder although imprinted on the mould is rather hidden by the paint and could do with a printed line I think. Lastly the two little outlets on the front of the wing body fairing are either missing or printed too far back. As you can tell I’m really trying hard to find some fault here.

Construction quality is also something special. There are no loose parts and everything fits very well indeed. I particularly like the landing gear on this model. The tyres are really nice and have proper wheel hubs.

I’m going to be ultra-harsh and knock a single point off this model for the printing around the wingroot.

If indeed NG Models is a new manufacturer, and I believe they are, they have started off with a flourish, which is matching that of Panda and Aviation400. This model is excellent all round and I feel miserly knocking off a single point. I should also point out that the model comes with a nice collector’s card showing that the production run was a decent sized 1,000 pieces. Whether the C919 becomes a success or not this model itself surely is. It remains a shame that these new manufacturers have such a fixation with the Chinese market as if they were making models for the USA and Europe they would really be showing up the established players.

Aeroclassics has been spending much of 2020 filling in gaps in its releases associated with the first two decades of deregulation in the United States. This has meant a heavy dose of DC-9s and 727s, […]

A wonderful array of new releases have been announced by Gemini Jets due to land at retailers from Mid Feb 2020. A few highlights on this batch include the stunning Air Bridge Cargo Boeing 747-8i […]