There’s no denying NG Models have made something of a splash with their new Boeing 757 mould, not only because it looks fine but also because they have engaged with the collectorate and ventured outside of the usual Chinese releases that the new generation of manufacturers have tended to favour. The 1990s version of the United Saul Bass livery is under-represented in 1:400 scale and this aircraft is an obvious slam dunk seller, even more so since production is so limited in number.

The Boeing 757 actually proved something of a sales disappointment during its first decade with orders for only 239 aircraft received between 1978 and 1987. This was however not a deficiency in the aircraft itself but more representative of limited opportunities for sales to the major US airlines during the deregulation bloodbath. In the USA only Delta, Eastern, Republic and Northwest had 757s delivered during that early period (Air Florida ordered some but they never were delivered) and of these Republic was merged into Northwest and Eastern struggled to afford the small number of 757s it acquired.

The 757 began to turn the corner in 1988 as Boeing booked three large orders for the type within a two-week period. First there was International Lease Finance Corp with a 100 plane order, then American Airlines for 50 and lastly United Airlines for 30 with 30 further options. Both American and United appreciated the 757’s efficiency, range and ability to effectively replace older Boeing 727s. United’s initial 757s were however actually destined to begin the replacement of the DC-8-71 fleet. The sale of the DC-8s to Guinness Peat Aviation assisted in the financing of the 757 deal.

The 757 has served United well, especially on long transcontinental routes, and in more recent times long thin transatlantic services, but by 2018 the average age of the fleet of 757-200s was 21.8 years and 83 aircraft had already left the fleet. These had mostly been replaced by new Boeing 737-900ERs however the 737 has never been seen as a full replacement for the 757 and United is still considering its plans for its new mid-market aircraft. Options include the A321neo and 737 MAX 10 but it also appears United is hopeful that Boeing will announce a new 797 to fill the role. Regardless United still operates 77 757s (including series 300s) and they are likely to be a common fixture for a few years yet.

The old Gemini 757 remains passable but its landing gear in particular has aged badly and even the recent upgrade by JC Wings cannot match the quality of this new NG Models mould, which easily takes its place as the best 757 in 1:400 scale and one of the best ever moulds at this scale.

The fuselage shape is excellent, particularly the nose shape and wingroot area. The latter is a really nicely countoured design with an exceptionally tight fit for the wings. The model has all three aerials present and they are well sized and fitted. Pleasingly NG are able to modify the number of aerials and domes on each of their models.

The wings, engines and especially the engine pylons are also first class efforts. Of course it was the nosegear of both the Gemini and Phoenix 757s that were their biggest problems so how does the NG Models gear compare. I hadn’t realised that the 757 had such a complex nosegear leg. This makes it difficult to realise in 1:400 but NG Models have triumphed. The gear legs are excellent – thin and detailed.

In my previous review of an NG 757 (published in Model Airliner magazine) I docked a point for the nosegear doors but impressively NG have changed this feature already and all the new western NG releases come with a new nosegear and nosegear door setup – perhaps they read my review! The result is that the nosegear doors are now better, and correctly sized. The nosegear itself is also slightly shorter, which looks good.

So not only have NG produced a killer mould but they have also modified it within a few months of its release. You can’t ask for more than that and this mould is topnotch.

United’s 757s have worn four separate mainline liveries but probably the most attractive was the first – the modified Saul Bass scheme introduced in 1988. This was a classy update of the 1974 livery moving the cheatline downwards and making it a bit thicker, which allowed for larger more size appropriate titles. This scheme really suited newer aircraft like the 757 and 737-300 but oddly didn’t suit older types like the 727 and DC-10 as well. Anyway it remains a lovely livery.

The Saul Bass livery is a bright colourful affair and NG Models have accurately depicted the three main colours of orange, red and blue. Placement of the rainbow striping is accurate and the titles are well placed too. The title font is pretty accurate except for the capital E which is too curvy. It’s rear spine should be straighter. Another minor inaccuracy is the lack of white outlining around the doors and emergency exits where they cross the rainbow cheatline.

The rest of the scheme is accurately produced from the lovely curved natural metal belly to the famous tulip on the tail. The engine nacelles are white, as they should be and the leading edge of the vertical stabiliser is nicely detailed in natural metal. Both the inaccuracies are small but they are present, even so it’s a good effort. 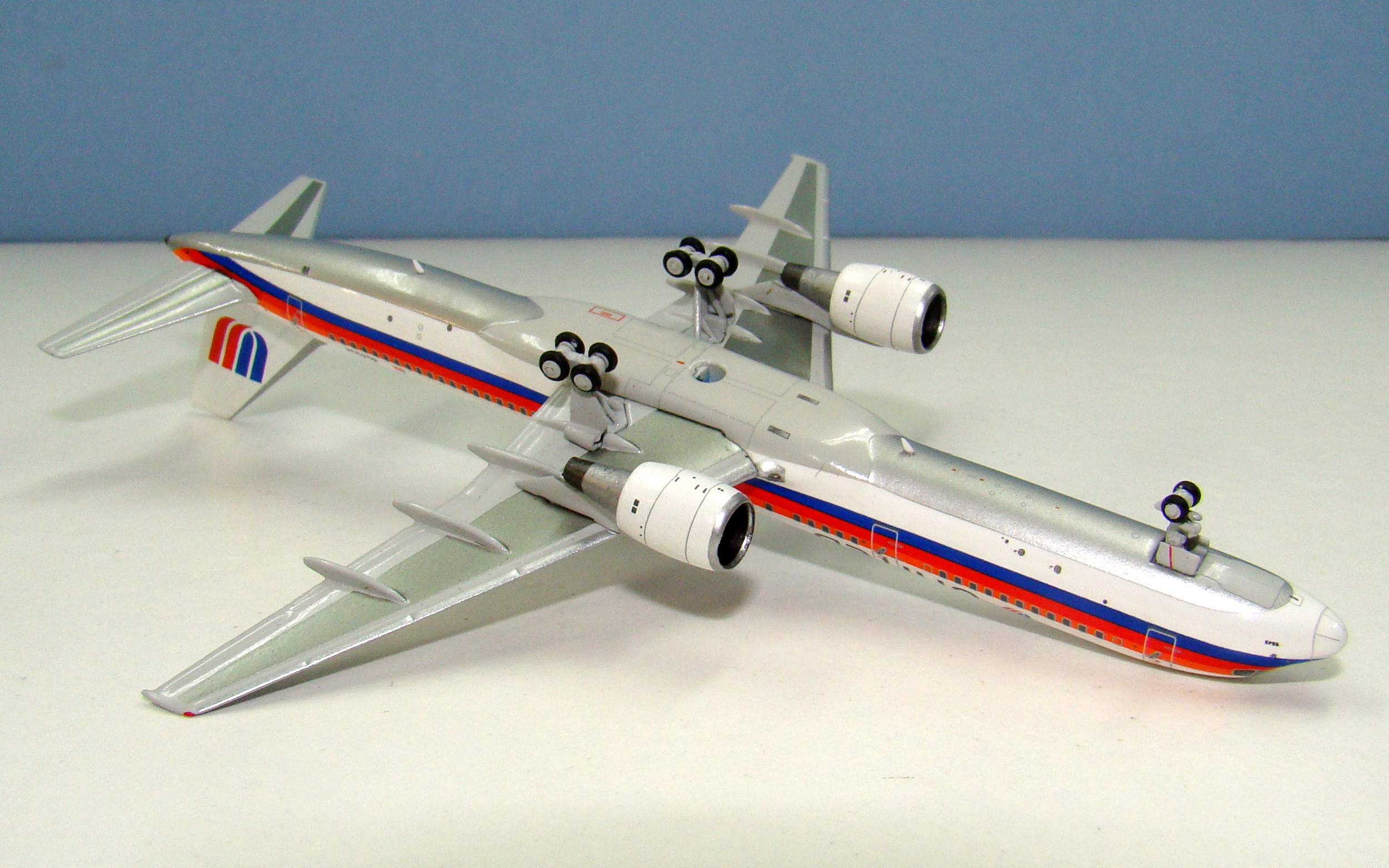 This mould has really detailed etching on the wings and tail to illustrate control surfaces, which limits the printing needed in these areas. Even so NG has paid close attention to the print quality of the model. The nosecone printing and engine nacelle printing really stand out but even when you look under the belly you can see extra printing on the natural metal areas. This is outstanding and miles ahead of the sort of thing Phoenix and Aeroclassics do.

There are no printing defects and the same goes for the build quality of the model itself. It is very well put together and of course comes in NG Models excellent tin box with foam insert. The same is done for the HYJLwings 757s but these are slightly more expensive as these also come with a limited edition card, which the NG Models releases do not.

The look and feel of these NG Models 757 is unsurpassed in my opinion by anyone else in this scale. Along with the extra quality of the box when you buy these you are truly getting a premium product. It isn’t just this release either – all of the 9 NG/HYJLwings 757s I own are superb. They do have a tendency to have the nosegear fallout in transit but it is easily replaceable and in every other way they are something for others to aspire too.

Earlier this week, Phoenix Models announced its lineup of models that will debut in October. Most of this month’s releases are wide-body aircraft, with the exception of a 1:400 scale Eurowings A320 and Citilink A320 […]